Retired Army Lt. Gen. Michael Flynn, who briefly served as President Trump's national security advisor, pleaded guilty Friday to a single count of making false statements to the FBI about contacts with the Russian ambassador. His contacts with high-ranking Russians date back at least to 2015. 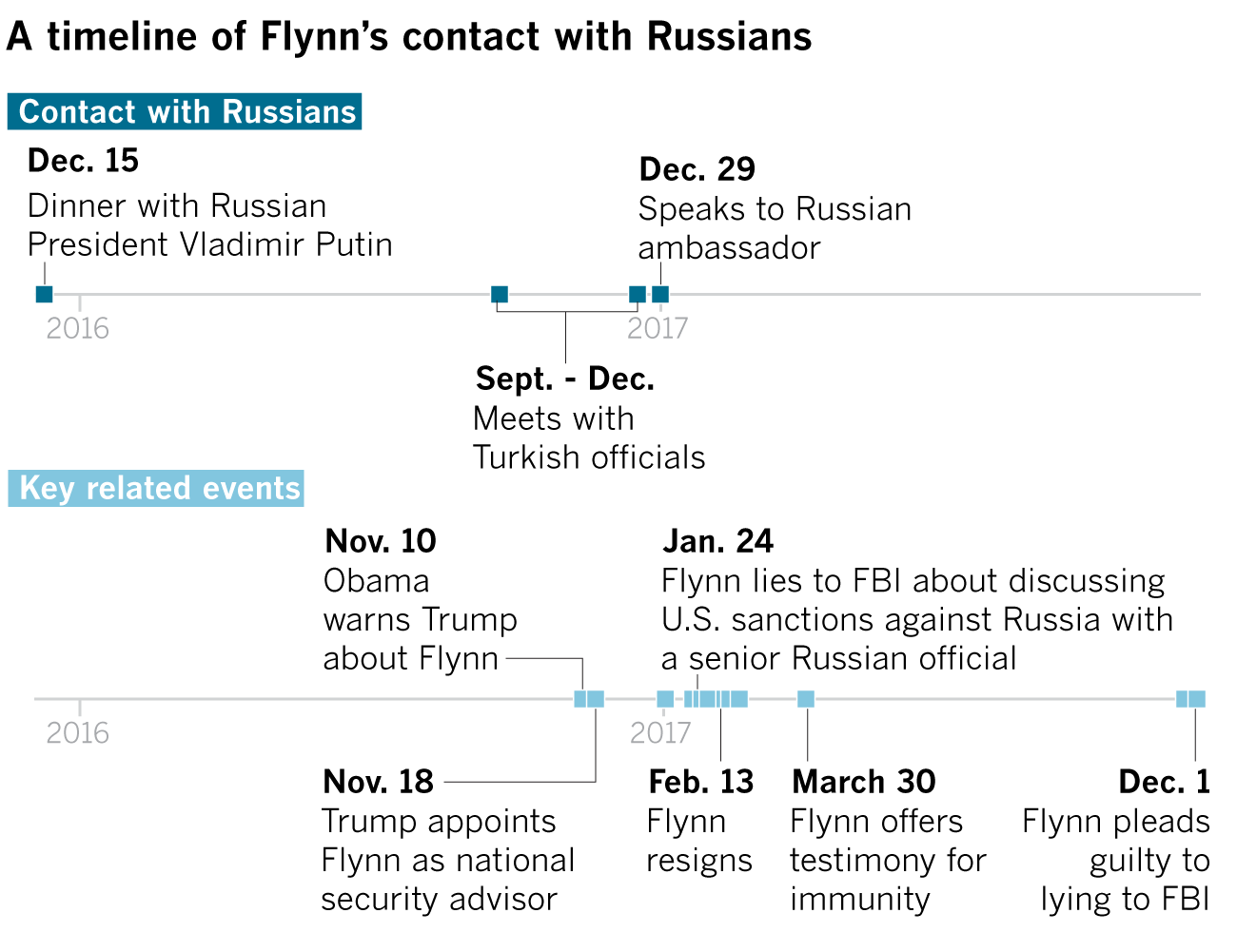 Flynn attends a lavish dinner in Moscow at which he sits next to President Vladimir Putin. He also receives a speaking fee from a Russian government-run television network that U.S. officials consider a propaganda outlet.

President Obama warns Trump during a meeting at the White House that Flynn is a problem.

A second meeting with Turkish officials

During Trump’s transition to the White House, Flynn reportedly has a second meeting with Turkish government officials at the 21 Club, an upscale New York restaurant. According to the Wall Street Journal, four individuals have told federal investigators that the meeting included discussion of a Turkish proposal to forcibly detain Fethullah Gulen, a Turkish dissident cleric living in exile in Pennsylvania, and deliver him to Turkey, in exchange for up to $15 million. Flynn’s lawyers have denied the account.

The Obama administration imposes sanctions on Russia in retaliation for Russia’s hacking of the Democratic National Committee in the summer and other efforts to interfere with the U.S. election. Flynn has five exchanges with Russian Ambassador Sergey Kislyak that day.

Intelligence officials, looking for clues to why Putin decided not to retaliate against the imposed sanctions, discover Flynn’s conversations with Kislyak, whose communications are routinely monitored by the U.S government.

Flynn denies that he discussed U.S. sanctions against Russia with Kislyak. Flynn has now pleaded guilty to lying to the FBI at that interview.

Sally Yates, the acting attorney general, goes to the White House and warns White House counsel Donald McGahn that Flynn has misled administration officials about his contacts with Kislyak and is potentially subject to Russian blackmail.

Flynn, responding to questions from the Washington Post, once again denies any discussions with Kislyak about sanctions.

Flynn resigns after the Washington Post discloses that he has misled Vice President Mike Pence and other administration officials about his contacts with Kislyak.

Trump, at a news conference, says in response to Flynn’s resignation: “I don’t think he did anything wrong. If anything he did something right.”

A negotiation for testimony

Flynn asks for immunity in exchange for testifying to the House and Senate intelligence committees investigating Russia’s involvement in the 2016 election, negotiations that were first reported by the Wall Street Journal.

A lawyer for Flynn informs Trump’s lawyers that they can no longer share information with the White House. The statement is the first indication that Flynn is cooperating with the special counsel’s office.

Flynn pleads guilty to lying to the FBI. The plea deal was announced by special counsel Robert S. Mueller III, who has been investigating whether members of President Trump’s team aided Russian interference in last year’s presidential election.