A storm warning has been issued for space, where a “cannibal” coronal mass ejection grabbed the attention of space-weather watchers.

The sun -- at a peak of activity in the 11-year solar cycle -- hurled a pair of CMEs that reached Earth early Saturday morning, Pacific time. The ejections, as NASA’s Alex Young says, “are a huge release of solar material, billions of tons, and magnetic field.” Upon reaching Earth, they can wreak havoc with our power grid -- and, on the bright side, create gorgeous auroras.

Three ejections were forecast for the weekend. The one that hit Earth was a “cannibal” CME, as SpaceWeather.com put it.

“It appears that at least two of them have combined -- one caught up with the other one and the two became one,” Young, a heliophysicist at Goddard Space Flight Center, said in an interview Saturday with the L.A. Times.

There was no geomagnetic storm from the impact, SpaceWeather noted.

“These CMEs are relatively minor and slow,” Young said, “but evidence supports another impact soon. So this could mean that we will have another impact later today or early tomorrow.”

Indeed, SpaceWeather reported “another CME is en route, due to arrive on Feb. 15-16. High-latitude sky watchers should remain alert for auroras.”

The forecast from NOAA’s Space Weather Prediction Center is for a moderate geomagnetic storm with an additional CME impact, according to Young. “This could give us some aurora into the northern U.S.”

NASA’s ACE spacecraft registered the impact of the CME, below. (Here’s the graph for mobile users.) 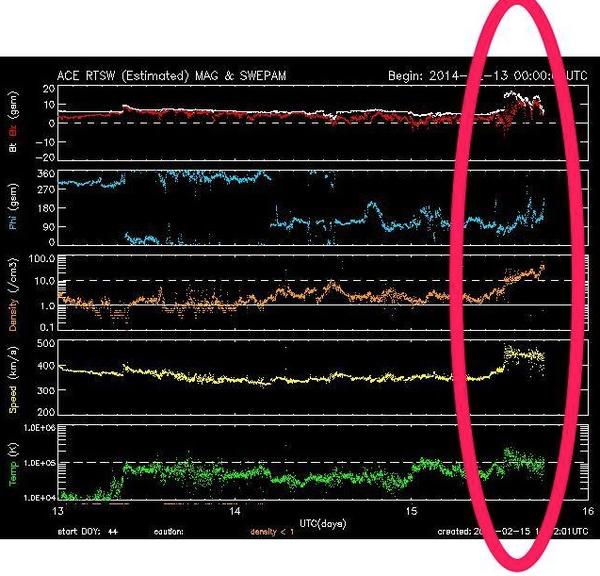