The Lakers starting lineup was in constant motion this season. Kobe Bryant was sidelined to start the season with an Achilles' tendon injury, he then returned but played in only six games before suffering a fractured knee and missed the rest of the season. Similarly, Steve Nash spent most of the season nursing a bad back. As often as not, the team had as many major players on the sidelines as on the active list, losing more than 300 man-games to injury in this lost season.

The Lakers starting lineup is on the move 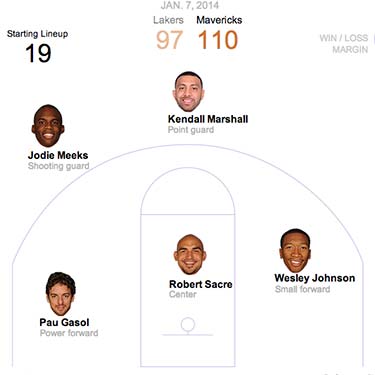 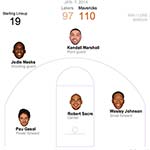 Jon Schleuss
Follow Us
Former graphics and data journalist Jon Schleuss left the Los Angeles Times in December 2019 when he was elected president of the NewsGuild, which represents about 20,000 journalists and other workers in the United States and Canada. Schleuss previously taught journalism students how to code at the University of Southern California. An Arkansas native, he graduated from the University of Arkansas in 2013.