Will a UFO-themed hotel land in Baker, Calif.? See the fantasy photos:

Luis Ramallo is a dreamer — and now he wants you to back his dreams for a UFO Hotel in Baker, Calif.

The owner of Alien Fresh Jerky has launched a Kickstarter campaign to persuade you — lots of yous — to fund his $30-million hotel planned for the eastern California desert town of Baker. (That's also where his jerky business is.) It's a place known mostly for its giant thermometer, a constant reminder of just how scorching the temperatures can be.

You can get in on the ground floor for as little as $1.

This is a full-on sci-fi fantasy space ship. The renderings on the Kickstarter website look like comic book creations of people in portals entering the hotel and laser-like beams of light shooting out from what looks like a multi-deck lobby/spacecraft deck.

Each of the 31 planned rooms will have a theme, such as space travel (featuring an asteroid field) and things such as weapons and transporter rooms. This from the Kickstarter description: "The UFO Hotel walkways allow you to move through the hotel as if you were traversing a spaceship, seeing only vast reaches of space, nearby planets and star systems in all their mystery and wonder." 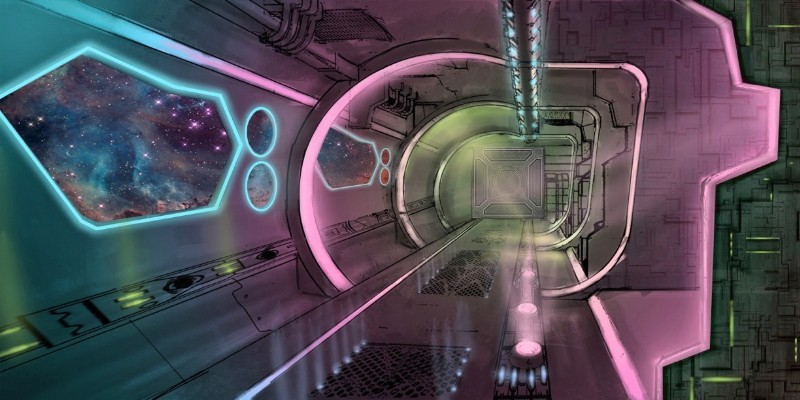 Rendering of the inside of the UFO Hotel. (Alien Fresh Jerky, copyright 2013)

A pledge of $10,000 means "you will be the first human ever to sleep in a UFO room of your choice." I suppose that means the aliens could theoretically have beaten you to being first.

Hotel rooms will be "competitively priced" at about $300 a night.

Why build the UFO Hotel in Baker? Ramallo says in a statement that it's a spot to cash in on, that his current jerky business receives more than 750,000 visitors a year. It's on the main Interstate 15 drag between L.A. and Las Vegas.

Ramallo, who came to America from Argentina with $100 in his pocket, wants to reinvigorate the town of Baker. He started Alien Fresh Jerky not far from what's known as Area 51 in Nevada before moving to Baker.

The fantasy hotel may fit in nicely with the other Baker landmark: the world's tallest thermometer, which last year received a much-needed makeover.

Check out the UFO Hotel Kickstarter campaign page to see renderings of the hotel and videos of Ramallo explaining his vision to the world.

In a withered desert town, he envisions an otherworldly hotel