Disneyland’s recent decision to raise the price of its top-tier annual pass to more than $1,000 has upset many hardcore fans.

The top-tier annual pass with no blackout dates leaps from $779 to $1,049 — a whopping $270 hike that represents a 35% price increase. A cheaper version of the Signature pass tacks on two weeks of blackout dates during the Christmas and New Year’s holiday season, the busiest time of the year at the Anaheim park.

June 6, 2016, 8:56 a.m.: A quote in this article by Disneyland spokeswoman Suzi Brown lacked proper attribution. The quotation was from a prepared statement.

The mid-priced Deluxe annual pass rises 9% to $599 with 50 blackout dates. Disneyland is no longer selling new $459 Southern California passes with 150 blackout dates, leaving only a low-end pass with 195 blackout dates that rises 10% to $329.

IN THE LOOP: Sign up for our weekly theme parks newsletter 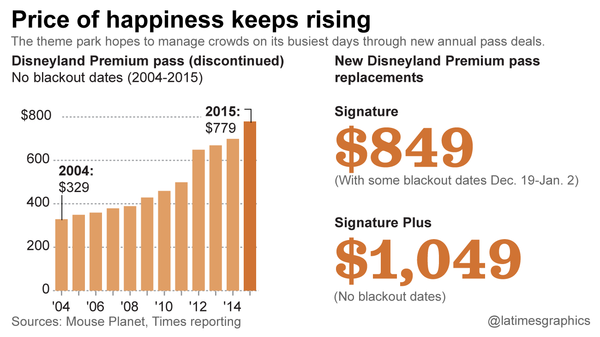 Annual passes at Disneyland have risen much faster than inflation in recent years.

Annual pass prices first skyrocketed during the construction of Cars Land at Disney California Adventure, when the top-tier pass jumped from $439 in 2010 to $649 in 2012.

So why is Disneyland raising annual pass prices so much? Let’s take a look at seven reasons: 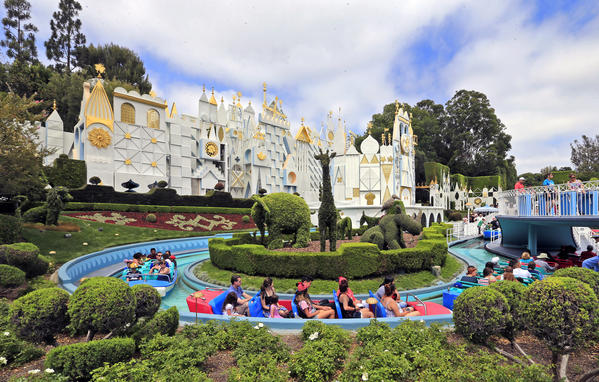 Disneyland is raising prices because it can.

Although passholders may complain loudly at times, many will continue to renew their passes because the annual investment still represents a great perceived value.

Disneyland is Southern California’s private country club, and $1,000 a year for a blackout-free annual pass remains an affordable luxury for many loyal diehards.

For hardcore fans who visit the park once a week or more, the annual pass is a bargain compared with paying $99 for daily admission.

"In addition to our continued investment in the guest experience and the expansion of our parks, our new selection of annual passes will help us manage strong demand and continue to deliver a world-class experience, while providing more choices for guests to select the pass that best meets their needs," Disneyland spokeswoman Suzi Brown said. 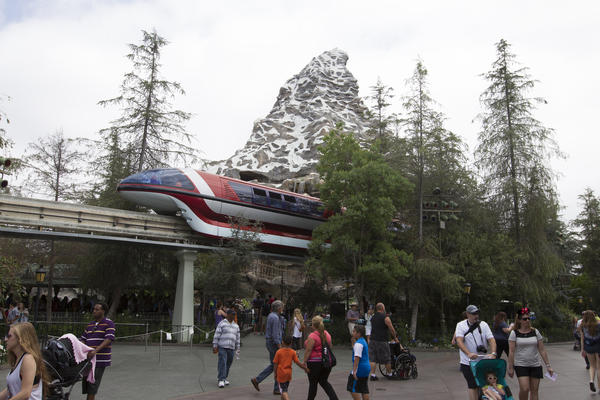 Disney is in business to make money. The price increase on annual passes is a calculated bet that a smaller pool of passholders still will generate the same amount of revenue or more.

Disney is wagering that the higher prices will offset the anticipated decline in annual pass renewals. 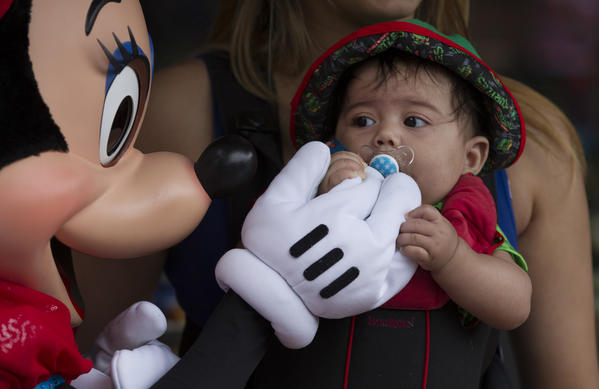 Disney can deal with fewer low-spending passholders if it means more space in the park for free-spending vacationers who settle in for multiple-day stays.

Obviously not all passholders are spendthrifts, with some hardcore fans dropping significant sums on limited-edition keepsakes. Still others are significant influencers, who persuade out-of-town family and friends to spend a day or two at the park.

That’s why the Mouse is treading carefully. The last thing Disneyland wants to do is alienate its loyal and passionate passholder base.

Christina House / For the Times

On its busiest days, Disneyland can become unbearably crowded — triggering an onslaught of complaints at Disneyland City Hall about long lines for rides, restaurants and even restrooms.

The annual pass was originally conceived as a way to entice locals to Disneyland and backfill the park on slow days when crowds were light. But with no way to limit annual pass participation other than price, Disneyland has watched its passholder population rise to nearly 1 million by some accounts.

With the latest move, Disneyland is trying to thin the annual passholder ranks by raising prices and eliminating annual pass options. The unspoken message is that Disneyland prefers big-spending loyalists who splurge for top-tier passes and flexible-schedule fans who come to the park on the least crowded days with a low-end pass. The passholder in the middle looking to spend less and come on the busiest days gets squeezed out by the latest annual pass changes. 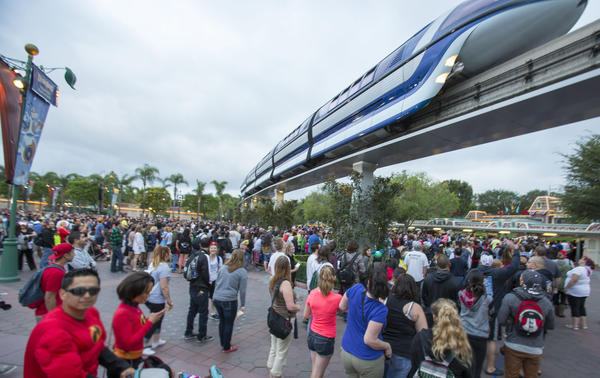 One of the biggest changes with the new annual passes is the elimination of an annual parking permit option for all but the top-tier passes.

In the past, annual passholders often have overwhelmed the Disneyland parking infrastructure on unexpected days and at unusual times — typically just before or after a long stretch of blackout dates. Also adding to the parking headaches are solo passholders arriving in individual cars who consume more parking than a family of four in a single minivan.

The elimination of a parking option with most annual passes has meant new passholders must fork over $18 every time they visit the park, essentially serving as an admission tax.

While opening up space in the Mickey and Friends garage, the shift in parking strategy has had a ripple effect across the resort as passholders seek alternatives. Getting into the Downtown Disney parking lot has become a road management nightmare that forces street closures and traffic jams. To address the parking pandemonium, Disney trimmed free parking at the shopping center by an hour (from three to two hours) and doubled the paid rate (from $6 to $12 per hour).

While Disneyland has committed to building a second parking structure, ground has not yet been broken.

Universal Studios Hollywood is currently building two parking structures in anticipation of the crowds that will descend on the park in 2016 for the Wizarding World of Harry Potter. Don't be surprised if Disneyland soon announces plans to build a parking structure in advance of Star Wars Land.

The “guest experience” is extremely important to Disneyland, which wants visitors to be happy at the happiest place on earth. Visitors tend to get very upset when they experience only a few attractions after paying $99 to get into the park on an extremely crowded day.

Disneyland constantly conducts surveys on everything from ticket prices to wait times to favorite rides. The two most important questions: Would you visit Disneyland again? And would you recommend the park to a friend?

Disneyland clearly believes its annual passes are underpriced for a year’s worth of exclusive entertainment experiences that can’t be found anywhere else in Southern California. 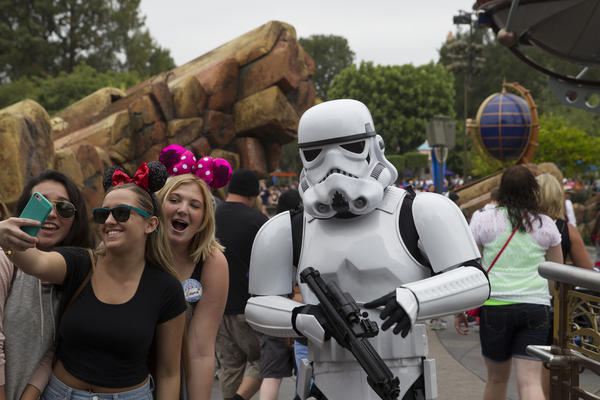 Obviously, the biggest reason for raising annual pass prices at this time is the pending debut of Star Wars Land.

Disneyland appears to be thinning the herd now before the really big crowds flock to the park when the much-anticipated Star Wars Land opens.

Although no opening date has been set, construction is scheduled to begin on the 14-acre themed land in 2016.

And one other thing is certain: Disneyland has never lowered prices in its 60-year history. Don’t expect that trend to change now.

Disneyland 2055: What the future may hold for the original Disney park

Disneyland 1955: 'Walt's Folly' got off to a nightmare start

> Sign-up for our weekly In the Loop theme park newsletter

Brady MacDonald is a freelance reporter and former senior producer for latimes.com.