The boldest line on Carly Fiorina's resume is her tenure as chief executive of the Silicon Valley giant Hewlett-Packard. But it was a stormy period that resulted in Fiorina's messy ouster. Her generous severance package helped ease her entry into politics. 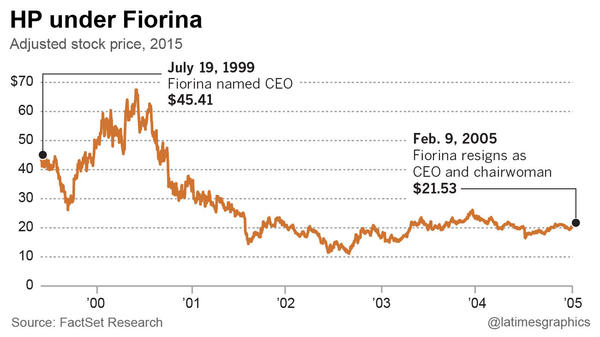 November 2001: The family of Hewlett-Packard's co-founder says it will vote against the Compaq deal.

December 2004: Fiorina announces that the company will buy back $2.9 billion in stock and aim for consistent profit after the roller-coaster results of recent years.

January 2005: The company combines its profitable printer unit with its struggling PC division.

Mark Z. Barabak is a columnist for the Los Angeles Times, focusing on politics in California and the West. A reporter for nearly 45 years, Barabak has covered campaigns and elections in 49 of the 50 states, including 11 presidential campaigns and scores of mayoral, gubernatorial, congressional and U.S. Senate contests. He also reported from the White House and Capitol Hill during the George H.W. Bush and Clinton administrations.