In Syria, a shrinking city struggles on between terrifying air raids

In Syria, a shrinking city struggles on between terrifying air raids In Aleppo, Syria's largest city, a kebab vendor works in the midst of a destroyed building. As Syria's war rages on, Aleppo is a city under gradual demolition, with a shrinking civilian population struggling to survive. More photos

The family members stood shivering on a balcony in Aleppo's Anadan suburb as midnight approached, their sleep interrupted by the nightly duty of a government helicopter pilot somewhere above them.

They followed the sound of the helicopter's whirring blades as well as scratchy updates coming over a walkie-talkie from rebels spread throughout the area.

News came in that the helicopter had dropped two barrel bombs — oil drums filled with TNT that can level buildings — on nearby towns.

They knew that the helicopters can carry up to four of the bombs. They waited for the last two.

Below them, lights came on in basement bunkers as others sought a small measure of protection. Khansa Laila walked out onto the balcony cloaked in several layers but still shaking in the nighttime chill.

"I woke up from the sound of the alarm, so I'm still cold," she said referring to the warning system the town's residents installed. "Also, fear makes you cold."

Against a starry sky, a series of red streaks from a 14.5-millimeter machine gun shot upward. But the streaks rose and fell without striking their target, their reach far less than the height of the aircraft.

Eventually the sound of the helicopter grew faint and was replaced by that of a warplane.

"We don't take the warplanes seriously anymore," Laila said. "They launch rockets that are precise, but helicopters drop barrel bombs that can destroy dozens of homes with one barrel."

The family went to sleep that night to the sound of machine-gun fire and the occasional rocket. 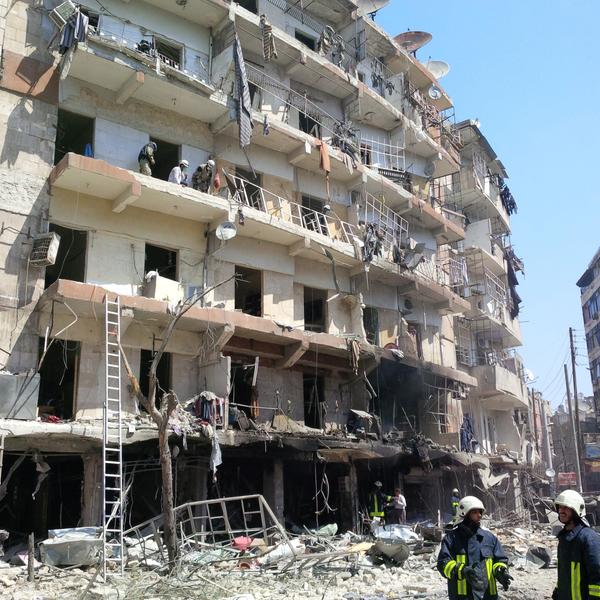 For more than three months, Aleppo's opposition-held neighborhoods and surrounding suburbs have been terrorized nearly daily by barrel bombs unleashed from helicopters. The bombs, TNT-filled oil drums that can level buildings, have killed more than 2,000 people, activists estimate. More photos

Three years into Syria's conflict, the cacophony of war has become a familiar companion to daily life here in the country's largest city, the sad soundtrack to its gradual demolition and a shrinking civilian population struggling to survive.

For more than three months, Aleppo's opposition-held neighborhoods and surrounding suburbs have been terrorized nearly daily by the barrel bombs. Activists estimate that more than 2,000 people have been killed in these attacks.

Those still in the city have adjusted to enduring the brunt of President Bashar Assad's military might with a resilience that borders on stubborn fatalism.

In a shoe store, a woman tries on a pair of wedge heels and deems them not comfortable enough "to flee" in. A 1-year-old with curly hair and big brown eyes speaks mostly in mumbles, but one word she knows clearly: tabit — it fell.

"A barrel falls and 10 minutes later people return to what they were doing," said Muhammad, a young man working at a makeshift gas station: 12 oil drums resting on their sides serving six varieties of gasoline.

Hours earlier, a barrel bomb had struck the Sakhour roundabout, hitting three vehicles and killing eight people. With the blood fresh on the pavement, motorists stopped and peered at the carnage.

The next day people walked by without a glance; the destroyed vehicles had become one more addition to the city's apocalyptic backdrop.

"Every day we see the names of the dead scrolling across the TV screen; they've just become numbers," one man said. "When I was a kid and someone died we mourned for 40 days, the TV could not be turned on. Now someone dies on one side and you turn around and watch a soap opera."

A barrel [bomb] falls and 10 minutes later people return to what they were doing.”

Since the government's barrel bomb offensive began in late December, the city and suburbs have traded off bearing the burden of the attacks.

On a recent day in an Aleppo vegetable market, a warplane's low rumble halted all transactions and conversation.

Unripe almonds and lettuce were momentarily forgotten as everyone turned their faces upward to track the plane by its sound. Drivers slowed down and stuck their heads out the window to look up.

Not until the rumble had faded, leaving only a billowy white trail across the sky, did the people return their attention to the mundane particulars of life. The plane was now the concern of another Aleppo neighborhood.

As he drove away from the market, Saleh Laila said, "If it had been a helicopter, they would watch it till it dropped the barrel, then pandemonium would break out and cars would start driving into each other and people would run, trying to get away."

A couple of charred and stripped vehicles mark the entrance of rebel-held Aleppo, a fitting welcome to a city that in some parts is a barren urban landscape.

The helicopter attacks day and night, coupled with poundings by warplanes and artillery as well as regular clashes between government and rebel forces, have transformed the once-vibrant commercial hub into one with entire neighborhoods deserted.

More than two-thirds of the city's population is estimated to have fled north either to Turkey or, for those not allowed passage into the country, along its border in ramshackle refugee tents. Certain suburbs have also seen a large exodus. As one Aleppo resident said of the city, "There are fighters, activists and shop owners. No one else is left."

Some neighborhoods of Aleppo have only one or two families left.

At the roundabout in one such neighborhood, Muhammad Khair and his father sat in the grassy center and watched as their two dozen goats grazed. They heard rumors that a sniper was shooting people at the field where the goats customarily graze, so when the animals began bleating from hunger they came here.

Two months earlier in this district of dense, unregulated housing, the goats wouldn't have been able to safely cross the road to get to the grass. Now, Khair said, in the span of 15 minutes, two cars had passed by.

At the scene of twin barrel bombings at a busy market, bodies, or what was left of them, were laid out along a sidewalk, covered with whatever was on hand: a green curtain, a plastic tarp and a banner for Dar al Shifa hospital, which had closed after repeated attacks.

A man, his shirt bloodied and neck bandaged, smoked a cigarette as those around him congratulated him on sustaining only a minor injury: "Thank God for your safety."

Now someone dies on one side and you turn around and watch a soap opera.”

— A resident of Aleppo

"Don't gather, don't gather!" yelled one rebel with a Kalashnikov rifle, warning people that a crowd could invite another attack.

"A plane is coming, a plane is coming!" another rebel shouted while standing atop a traffic barrier, trying a more direct tactic to get the crowd to scatter. People ran away and then a few minutes later drifted back.

Hours later, the broken glass and concrete had been swept and the blood washed away.

Children gathered around an ice cream stand, standing on tippy-toes to peer at the available flavors, and men bought produce from a fruit vendor, the color of the oranges bright against the gray of fallen concrete. 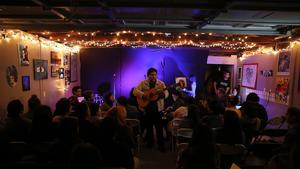 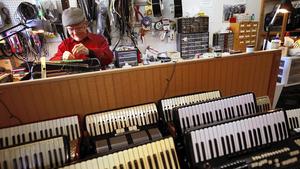