A champion-wrestler-turned-chef brought what he learned in Tokyo home to Sao Paulo, which today is a melting pot as complex as the stew he specializes in.

A champion-wrestler-turned-chef brought what he learned in Tokyo home to Sao Paulo, which today is a melting pot as complex as the stew he specializes in. 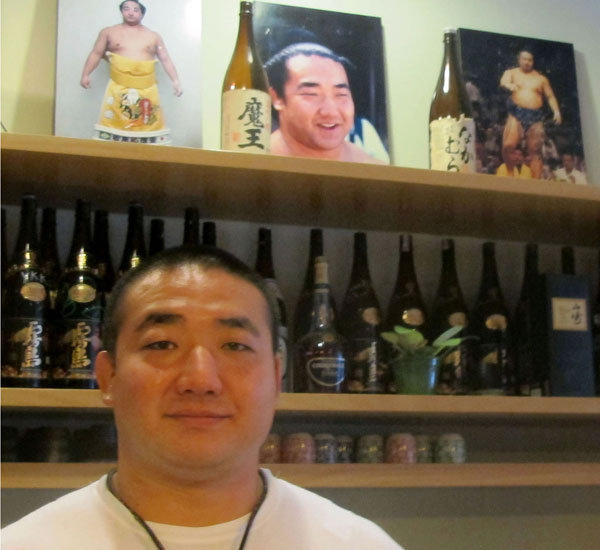 Fernando Kuroda behind the bar at his Sao Paulo restaurant, Bueno. On the shelf are photos from his days as a champion sumo wrestler in Japan. (Vincent Bevins / For The Times)

A champion wrestler in Tokyo, he returned to Brazil and opened restaurants in Sao Paulo, which today is a melting pot as complex as the stew he specializes in. 'I knew I could bring a new kind of Japanese food here that no one knew about, something I know deeply.'

Fernando Kuroda didn't like eating chankonabe at first, because he was forced to eat so much of the thick stew that he would get sick and could barely walk.

"They would just fill me up and fill me up with food, or I wasn't allowed to leave the table."

But that was the life of a (relatively) small 15-year-old who had moved into sumo wrestler training quarters in Tokyo to study with a master.

So was learning to cook. As part of the strict disciplinary tradition of his training, he spent years washing floors and dishes before being allowed to cut vegetables and, eventually, prepare full meals.

"I always liked cooking," he says, grinning, "and soon I learned to like to eat too."

But much of the rigidly hierarchical sumo life was foreign to Fernando, who was different from the other boys: He was born and raised in Sao Paulo, 11,000 miles from Tokyo.

Even growing up in the world's largest Japanese diaspora community, whose traditional neighborhood near Sao Paulo's center is lighted by Japanese street lamps, didn't help much.

"I didn't know the correct way to speak to the elders in Japan. I would break all kinds of rules on accident," says Kuroda, 36. "And that meant they would smack me in the head with a stick."

The discipline — and the eating — eventually paid off, and Kuroda became a champion sumo wrestler, reaching Japan's prestigious first division more than a decade ago. But even though he was famous enough to be mobbed on the street when he retired in 2003, he knew he wanted to come back to Brazil. 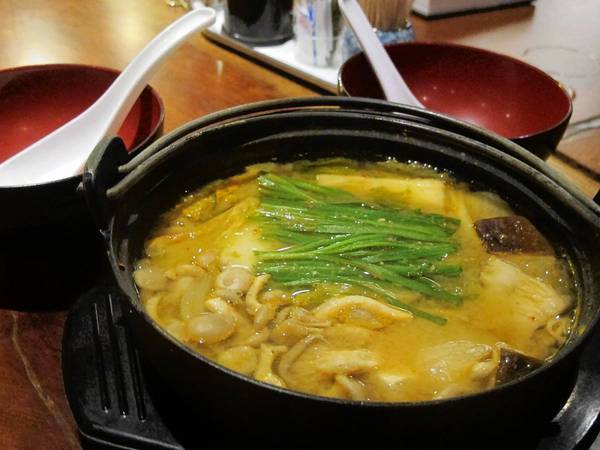 Chankonabe, the thick stew that sumo wrestlers have eaten for centuries to gain weight, is served at Fernando Kuroda's restaurant in Sao Paulo. (Vincent Bevins / For The Times)

"It's where I grew up. All of my real friends were here. Life is better, and this country is growing," Kuroda says, sitting in his restaurant in front of a giant sign that reads "NO SUSHI. NO SASHIMI." "And I knew I could bring a new kind of Japanese food here that no one knew about, something I know deeply."

In 2005, Kuroda opened his restaurant, Bueno, in Liberdade, Sao Paulo's Japanese district, specializing in his old nemesis: chankonabe, the traditional sumo dish brimming with pork, soy and vegetables, and everything else the wrestlers could think of to throw in to put on weight.

At first, his clientele was almost entirely Japanese, but since then his sumo fare and other hot plates typical of izakaya, or Japanese bars, have helped transform the city's Japanese culinary scene, considered by many among the world's best.

Now his Bueno and Mini Bueno, a tiny restaurant and karaoke bar, serve Brazilians of all colors, as well as the arrivals from South Korea, China, the United States, Europe and Africa who have descended on the city in recent years to take advantage of record-low unemployment and a government eager to fill the job gaps with foreigners.

"Mini Bueno is without a doubt my favorite place in Sao Paulo," says Diego "Didi" Effe, a host on MTV Brazil. "It's everything I love about this city: people coming together and singing in Japanese and English, Portuguese, whatever, just having a great time. It's what we are all about here."

At the turn of the 20th century, not long after Brazil abolished slavery, the relatively unimportant city of Sao Paulo began to grow rapidly on the backs of its coffee plantations. But those plantations needed labor.

Instead of bringing in black workers from other parts of Brazil, the government turned to Western Europe in an attempt to "whiten" the population as well as fill jobs.

When countries such as Italy, Portugal and Spain couldn't supply enough willing hands, Brazil turned hesitantly to Japan. At first, many immigrants thought they'd get rich quickly and go home, but the rural work proved tough, and of the thousands who came between 1907 and World War II, the vast majority stayed. There are now about 1.5 million Japanese Brazilians, mostly concentrated in Sao Paulo. 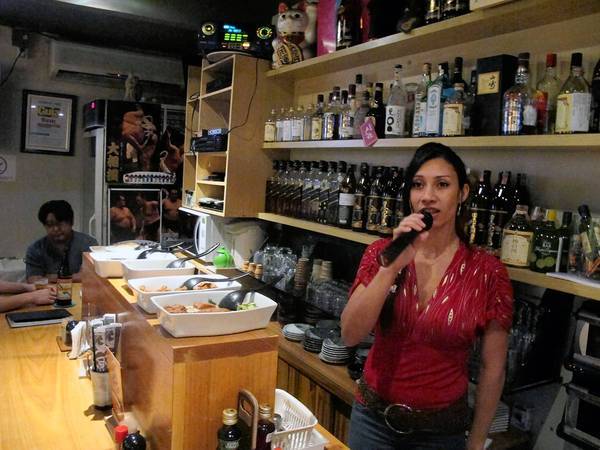 Vanessa Mitsuoka, who was born in Brazil but raised in Japan, sings for guests at Mini Bueno, Fernando Kuroda's karaoke bar in Sao Paulo. (Vincent Bevins / For The Times)

Generations later, it's no more unusual to meet Paulistanos with Japanese features than it is to see faces with Portuguese or African traits. The community quickly rose from what initially was akin to indentured servitude to become influential in the arts, culture and industry, and many members blended seamlessly into the ever-swirling Brazilian gene pool.

Since 1945 there has been an easy flow between the two countries. In the 1980s, many Brazilians of Japanese descent left economically troubled Brazil for booming Japan. But after the 2008 global economic crisis, which hit Japan but barely scratched Brazil, and Japan's 2011 tsunami, many Japanese Brazilians came back.

Vanessa Mitsuoka, 32, born to a Japanese Brazilian father and a dark-skinned Brazilian mother, went to live in Japan at 10 and then decided to make a new life in Brazil after the 2008 financial meltdown. She works at Mini Bueno, serving food and making caipirinhas with shochu, a Japanese liquor, and serenading guests with Japanese karaoke.

"I miss lots about Japan — the food, the culture, everything," Mitsuoka says as she cuts limes one quiet night at the bar. "But I also suffered a lot of discrimination there because of my darker skin.... Now, here, there are lots of new immigrants coming from all over the world and Brazil is a place where it's easy for almost anyone to live."

He was famous for being a cute little guy. Sumo is a very, very old-school sport, steeped in deep traditions, and maybe doesn't mean as much for the younger generation as baseball or soccer do."

Both of Kuroda's parents were born in Japan. His father, an engineer and sumo instructor, had dreamed of becoming a professional sumo wrestler but never made it.

He began helping his son train when he was 4, at first without anyone taking it very seriously. But when it became clear the younger Kuroda had a shot at the big time, the teenager left his family in Brazil and moved to Japan for full-time training.

"He didn't say it outright," Kuroda says of his father. "But I knew he was extremely proud."

Kuroda has a baby face and an easy smile. But he's quiet and a bit shy, especially for someone who, as he says, was treated like a king for years. He's still solidly built, but not so much as to stand out. He speaks carefully, and clearly has mixed feelings about the sumo life.

Waking up at 5:30 every day and training until noon wasn't easy, nor was spending the rest of the day in ritual food preparation, but he says he developed a dedication and discipline that is now essential to his restaurants, where he works 85-hour weeks. He spends what precious time he has off with his 3-year-old son, Kaio (the name works in both Portuguese and Japanese), and training young sumo students on Sundays.

At the restaurant, he prepares all the chankonabe himself. The stew's water-soy base can take all kinds of additions and be eaten in huge quantities, but it wasn't the only food his trainers used to get him up to the minimum weight required for competition.

"Lots of rice. And a typical dinner may be five Kobe beef steaks," Kuroda says, laughing.

In addition to his moves on the mat, Kuroda got special media attention in Japan for his good looks, says Mitsuoka, who wasn't a huge sumo fan when living in Japan but definitely knew of her future boss.

"He was famous for being a cute little guy," she says. "Sumo is a very, very old-school sport, steeped in deep traditions, and maybe doesn't mean as much for the younger generation as baseball or soccer do."

Now, pictures of Kuroda's sumo wrestling days adorn the restaurant, which provides plenty of its own options for packing on the pounds. There's the pork belly appetizer; ox tongue served with lime; and okonomiyaki, a savory pancake loaded with shrimp and topped with fish flakes. The menu also includes Korean bibimbap, and all of this is much closer to the way Japanese actually eat, Mitsuoka says.

As a sumo wrestler, Fernando Kuroda reached Japan’s prestigious first division. But even though he was famous enough to be mobbed on the street when he retired in 2003, he knew he wanted to go back to Brazil. "It's where I grew up," he says. (Vincent Bevins / For The Times)

"Sushi in Japan," she says, "is for a special occasion, or a party, or a late-night delivery to your house. No one eats sushi every day."

Bueno recently relocated from Liberdade to a more upscale spot, where hip Brazilians eat downstairs and groups of Japanese businessmen in suits get drunk in private booths upstairs. The staff speaks Portuguese and Japanese, and includes a Belgian bartender who is fluent in both.

"But we wanted to keep one foot in Liberdade, because people love it there, and it's an important part of the culture," Kuroda says. "And so we opened Mini Bueno, because everyone likes karaoke."

Kuroda wants to open a few more restaurants, and perhaps establish them well enough to spend more time relaxing or with his sumo students.

"I also want to open a restaurant in Japan. I was just there and our food is just as good as theirs," he says, pausing. "But why wouldn't it be?"

An early terrorist in the U.S. condemns today's jihad