Divers from the Royal Canadian Mounted Police searched Monday for a passenger who was missing in the frigid waters off Vancouver Island, after a weekend whale-watching boat sank, killing five passengers.

The Leviathan II was carrying 27 people when it sank Sunday afternoon about eight miles west of the Canadian surf town of Tofino. One woman and four men, all British nationals, died in the incident, a spokeswoman from the British Columbia Coroners Service said Monday morning.

A fatal incident while “whale watching is really unusual,” said the agency’s Barbara McLintock. “The only other whale-watching death we can recall recently was in 1998, and the same company” was involved.

Authorities are investigating the cause of the accident. 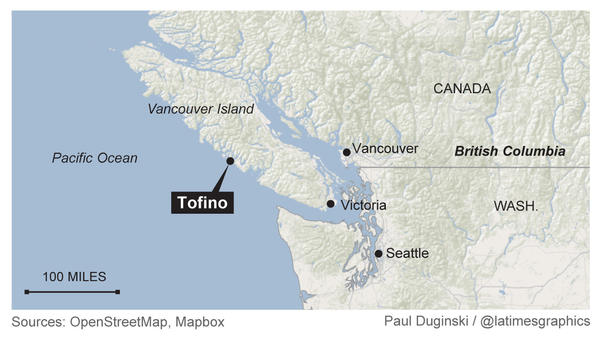 Eight survivors were taken to Tofino General Hospital, according to Valerie Wilson, spokeswoman for Island Health, which operates the facility. Wilson said Sunday night that all eight were listed in stable condition, though one was in serious condition.

British Foreign Secretary Philip Hammond confirmed the nationality of the victims in a statement released early Monday morning and said he was saddened by the incident.

“My thoughts are with the family and friends of all those affected by this terrible accident. Consular staff in British Columbia are supporting the family members of those who have died and we will remain in close contact with Canadian authorities as further information becomes available,” Hammond stated.

Tofino, with about 1,900 people, is a well-known eco-tourist destination because of whales living off the island, part of British Columbia.

Carl Martin, his son Marcel Martin and nephew Don Williams Jr. were halibut fishing Sunday afternoon when they heard the captain of the Leviathan II send out a distress call over marine radio.

They raced to Plover Ridge, where the boat went down, and saw nine people in the water, Joe Martin, Carl’s brother, said in a telephone interview Monday.

“They saw two bodies in the kelp, and they had to back the boat up in order to get them,” Joe Martin said. “Then another body surfaced, which they grabbed as well. They had a difficult time pulling them in. They were covered in diesel.”

The family belongs to the Tla-o-qui-aht First Nation, and members of the tribe gathered Monday to talk about the tragedy with the three men who retrieved the bodies. Joe Martin said his brother and nephews were “shocked” by the accident. The two young men “have never had to deal with anything like this before.”

Joe Martin commended members of the Ahousaht First Nation, who were the first on the scene after the Leviathan II went down and were instrumental in rescuing the 21 passengers and crew members who were saved.

"The people from Ahousaht, they’re always on the ball immediately, any time there’s a boat emergency,” Joe Martin said. “The captain of the boat, I’d like to commend him, too. He did what he was trained to do. He called mayday immediately when he knew he was in trouble. If he had not done that, I think we would have had a lot more loss of life.”

Tofino Mayor Josie Osborne echoed Martin’s praise of the Ahousaht First Nation members, who live in a neighboring community of about 1,000 people.

“They’re very maritime-oriented,” she said. “They’ve lived on the ocean for thousands of years. They’re the most knowledgeable people about these waters, and they were the first on the scene.”

Osborne said about 30 vessels responded to the Leviathan II’s distress call, rescuing survivors and looking for the missing passenger until the search was called off by the mounted police about dusk Sunday. Investigators from the Transportation Safety Board of Canada have arrived to try to ascertain what caused the boat to capsize.

“This is a very, very hard thing to face,” Osborne said. “I expect the impact to be quite heavy. Eco-tourism is a big part of our economy. We’re very, very mindful of the whale-watching community.”

Osborne said the community has planned a potluck for Monday evening “so we can gather and express our love and support for one another, share our stories and try to make some sense of this tragedy.

“Unfortunately Tofino is no stranger to maritime incidents,” she said. “We have had cases where fishing or pleasure vessels have gone down and lives have been lost. But certainly nothing of this size has taken place before.”

The whale-watching season in Tofino begins in March and runs through late October. According to the area’s official tourism website, visitors can see humpback and Pacific gray whales as well as orcas and porpoises during the season.

About 85 Orcas reportedly live in the southern waters while 250 live off the northeastern coast. About 20,000 Pacific gray whales annually migrate along the coast, according to the website of British Columbia.

The area is part of the Clayoquot Sound Biosphere Reserve, designated by the United Nations Educational, Scientific and Cultural Organization.

The boat was operated by Jamie’s Whaling Station and Adventure Centers in Tofino. The company’s owner, Jamie Bray, issued a statement early Monday morning about the disaster.

“It has been a tragic day,” he said in the post on the company website. “Our entire team is heartbroken over this incident and our hearts go out to the families, friends and loved ones of everyone involved.

“We are doing everything we can to assist our passengers and staff through this difficult time.”

The other fatal whale-watching accident in the region also involved a boat owned by Jamie’s Whaling Station. In 1998, the Ocean Thunder was swamped during a trip out of Tofino, “throwing all occupants into the cold water,” according to the TSB’s official report.

One of the three passengers and the boat operator died in the incident.

“A factor contributing to the occurrence was that the operator did not fully appreciate the conditions the boat would meet at the time of the accident in the turbulent waters in the vicinity of reefs,” the report said.

In a statement, Canadian Prime Minister-designate Justin Trudeau thanked all those who participated in the rescue effort and offered his condolences to the victims and their families.

"I know firsthand of this coastal area's natural beauty and the many people who visit here from all around the world," said Trudeau, who won Canada's national elections last week.

John Forde, who runs a whale-watching operation in Tofino, told the Associated Press on Sunday that he had no clue how the boat could have sunk.

"Over the course of a season and years we take out thousands and thousands of people on these trips" in conditions similar to Sunday's, Forde said. "I have no idea what the issue was or what actually happened."

LaGanga reported from Seattle and Parvini from Los Angeles.

How Mexico escaped the worst of Hurricane Patricia

1:44 p.m.: This article has been updated with information from rescuers.

Oct. 26, 8:52 a.m.: This article has been updated to report nationalities of the dead and other details.

11:22 p.m.: This article has been updated to report five people have died.

9:08 p.m.: This article has been updated to include a comment by John Forde.

8:52 p.m.: This article has been updated to add information from Island Health and a comment from Tofino's mayor.

8:22 p.m.: This article has been updated to add background on Tofino.

Maria L. La Ganga is city editor for the Los Angeles Times’ Metro section. She has covered six presidential elections and served as bureau chief in San Francisco and Seattle.