China took the gold medal last year in purchases of the precious metal, becoming the world’s largest consumer even as overall world demand was down in the face of rising stock prices.

Consumers bought a record 3,863.5 tons of gold jewelry, coins and bars worldwide last year, up 21% from 2012, according to data released Tuesday by the World Gold Council, a market development organization for the industry.

China and India led that demand.

Demand was up 32% in China, where consumers bought 1,120.1 tons of gold, overtaking India as the world’s largest consumer, according to the group’s annual report.

But the global growth in consumer purchases was offset by an outflow of 881 tons from exchange-traded funds. That was a key factor in reducing overall gold demand by 15% last year, the report said.

The Federal Reserve and other central banks also reduced their gold purchases. They bought 369 tons, down 32% from the previous year.

Despite those declines, 2013 was a strong year for gold demand across a variety of sectors and regions, said Marcus Grubb, managing director for investment strategy with the World Gold Council.

“Specifically, it was the year of the consumer,” he said. “Although demand has continued its shift from West to East, the growing demand for gold bars, coins and jewelry is a global phenomenon.”

Many consumers and investors have flocked to gold as a haven in recent years in the wake of the financial crisis and gyrating stock markets. But a rebound in financial markets last year led to a sharp drop in gold prices.

The average annual price in several currencies was about 16% lower in 2013, the report said. 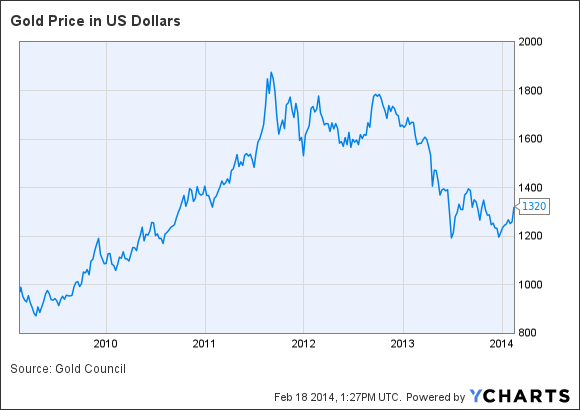 Gold Price in US Dollars data by YCharts

Jim Puzzanghera covered business and economic issues from the Los Angeles Times’ Washington, D.C., bureau. He joined The Times in 2006 and won the paper’s Editor’s Award in 2009 for coverage of the financial crisis. He has worked in the nation’s capital since 1998 and is a two-time National Press Club award winner for Washington coverage. A Northwestern University graduate, he previously worked for the San Jose Mercury News, Newsday and the St. Petersburg Times. He left The Times in 2019.