Barbie seems to be losing ground as the queen bee of doll-dom, as sales of the Mattel Inc. figurine slipped for the fourth straight quarter.

Revenue from the fashion toy sank 12% in the second quarter, which ended June 30, the El Segundo-based company said Wednesday.

During the same period, other girl brands such as Monster High surged up 23%, the company said. Mattel’s American Girl line got a 14% boost.

Overall, sales at the nation’s largest toymaker were up 1% to $1.17 billion, though revenue from North America softened 2%.

The company is doing heady business abroad, where a growing middle class helped sales swell 4%. Emerging-growth markets such as China, Russia and India “continue to prove to be fertile ground,” with revenue surging by double digits, Chief Executive Bryan G. Stockton said in a conference call with analysts.

The company’s stock was down 5%, or $2.33 cents, to $44 a share in late-morning trading in New York. Mattel also announced a 36-cent dividend on Wednesday.

Stockton said the company does two-thirds of its business in the second half of the year, which culminates in the holiday shopping craze.

As for Barbie’s weakness, Stockton said cannibalization from Mattel’s other brands was partly to blame.

The 54-year-old doll is keeping up with competitors as it “continues to merge the latest trends with technology by focusing on innovation, customization and creative play,” Stockton said.

The company is planning to launch Barbie-related products featuring gesture-recognition software, virtual makeup on an iPad masquerading as a digital mirror, and LED and touchscreen technology. 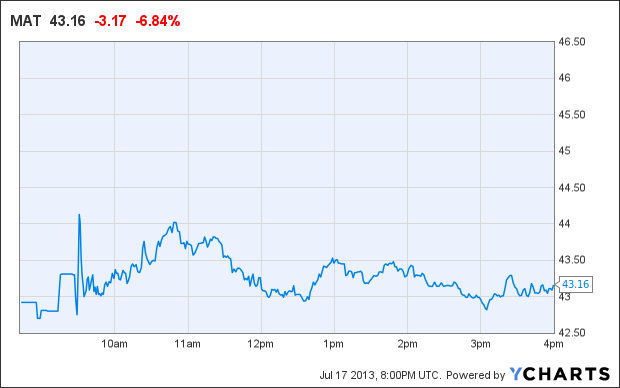 Barbie vs. realistic doll: Guess which one Demi Lovato likes?