A new outlet mall is sprouting north of the Grapevine

After a tedious car trip along Interstate 5’s fabled Grapevine stretching north through the Tehachapi Mountains, nothing seems more welcome at times than the oasis of ready food and hot coffee brewing. Soon, you can do some serious shopping too.

One of the most popular stops for California travelers is about to get another roadside attraction: a $90-million outlet shopping center with more than 70 stores.

The site where I-5 and Highway 99 meet already lures 14 million people a year out of their cars, its owners said. The Starbucks there consistently ranks among the chain’s five busiest in the country.

With that pipeline of visitors in mind, developers have begun work on the Outlets at Tejon Ranch, a large outdoor mall intended to offer designer-brand merchandise at value prices. It is being built by landowner Tejon Ranch Co. and New York real estate investment firm the Rockefeller Group.

The mall is rising 30 miles south of Bakersfield at the Laval Road exit, where a collection of gas stations and fast-food restaurants such as Wendy’s, McDonald’s and Subway serves travelers. Nearby are massive distribution centers for such brands as Ikea, Wal-Mart and Target, and plants for Nestle, Frito-Lay and Formica.

“There have been changes in consumer behavior since the downturn,” said McMahon, who is in charge of commercial real estate for Tejon Ranch. “Outlets let people continue to wear brands they feel good about and do it on a budget. There is tremendous demand for that.”

Other U.S. developers obviously agree. Over the last five years, 37 outlet malls have been built in the country, but only one conventional regional mall was completed — and that was built by the Mormon Church in Salt Lake City, said retail consultant David Ober of Global Outlet Management in Hershey, Pa.

Outlet malls have seen double-digit sales growth each year since 2007, Ober said, while regional mall sales have yet to return to pre-recession levels. Manufacturers are also achieving their greatest profits at outlet malls, he said, with many garnering 50% to 75% of their net operating income from stores in such centers.

Tejon Ranch Co. has yet to identify its signed tenants for competitive reasons, but the appeal of outlet malls to retailers is easy to see. The website for trendy clothier Hot Topic, for instance, lists only outlet centers as homes for its four newest stores.

Many retailers were once committed to keeping their outlet stores 100 miles or so away from their main-line stores. But they are increasingly dropping the distance requirement in an effort to generate more overall sales, retail industry analyst Garrick Brown said.

Nordstrom Inc. opened only a few stores during the lean years of 2008 to 2011, but launched about 120 Nordstrom Rack discount outlets, Brown said.

Outlet centers “might be just as big a threat to malls as e-commerce,” said Brown, research director at real estate services firm Cassidy Turley. “It’s all discount-driven” competition, he said.

Business is so brisk at outlet centers that retailers have to make special merchandise to sell at them, Brown said.

“There is myth that you are getting goods that didn’t sell last season,” Brown said. “There aren’t enough clothes left over from last season to stock all these stores.”

Department store outlet concepts, such as Bloomingdale’s Outlet and Nordstrom Rack, stock a mix of merchandise, including end-of-season and clearance products, returned items from full-line stores, excess inventory from vendors and outlet-only styles.

At Gap Outlet and Banana Republic Factory Store, all merchandise is designed and manufactured specifically for those locations — meaning the items were never offered at the chains’ full-price stores.

One reason sales are high at outlet malls is because people who go to them are usually committed to spending money. “People make a day of it. They’re not going to the mall just to kill some time,” Brown said. “That’s what retailers are facing trouble with in the cities.”

The Outlets at Tejon Ranch will have 320,000 square feet of stores laid out in an oval shape, Tejon Ranch’s McMahon said.

The outdoor mall will have Old California architecture and a replica of Bakersfield’s landmark Beale Memorial Clock Tower.

The mall’s developers hope to draw Bakersfield residents and people who live in north Los Angeles County as well as long-distance travelers on the freeway that runs from Mexico to Canada. About 65 million travelers pass the mall site annually.

Another target audience is foreign tourists eager to bring name-brand merchandise home to their friends and families. Newly affluent Chinese travelers are among the most sought after, but many tours traverse the state or make special shopping day trips.

“Over 300 buses a day pass by or stop,” McMahon said. “Tourism will obviously be a big component of our market.” 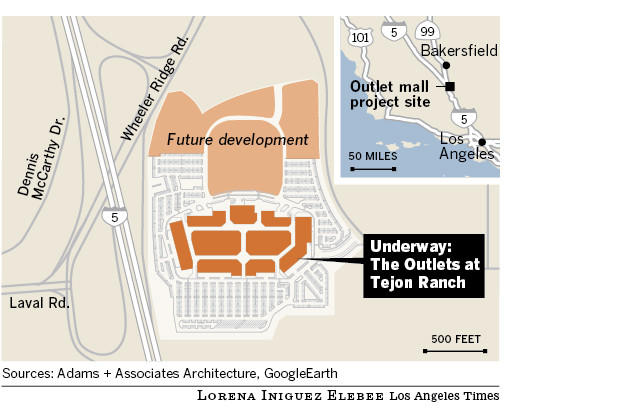