The company reported revenue in the fourth quarter of its 2013 fiscal year of $37.5 billion, up from $35.97 billion a year earlier. That number topped analysts’ estimates of $36.84 billion and Apple’s own guidance from last month of around $37 billion.

Apple had said revenue probably would fall at the higher range of its guidance of $35 billion to $37 billion after the company reported it sold a record 9 million new iPhones during the first weekend they were available.

The results were driven by sales of 33.8 million iPhones, compared with 26.9 million in the year-earlier quarter. That increase of 26% is below the 58% rate of growth in iPhone sales the company posted a year earlier.

Apple said it sold 14.1 million iPads, just a bit more than the 14 million it sold in the same quarter last year. Still, the company managed to avoid posting a decline in iPad sales for the second quarter in a row even though many consumers have been waiting for the iPads that were just unveiled this month.

Perhaps more importantly to Wall Street, Apple said it expected revenue of $55 billion to $58 billion for its current quarter, which ends Dec. 31. That range would be a bit above the consensus estimate of $55.65 billion that analysts had been projecting for the crucial holiday season.

Apple is scheduled to discuss its results in a conference call at 2 p.m. Analysts will be looking for more information about whether Apple can make enough of its iPhone 5s to meet demand, and when the iPad Mini with a Retina display might be available.

What to expect when Apple reports earnings Monday

How the iPhone and iPad transformed the art of David Hockney 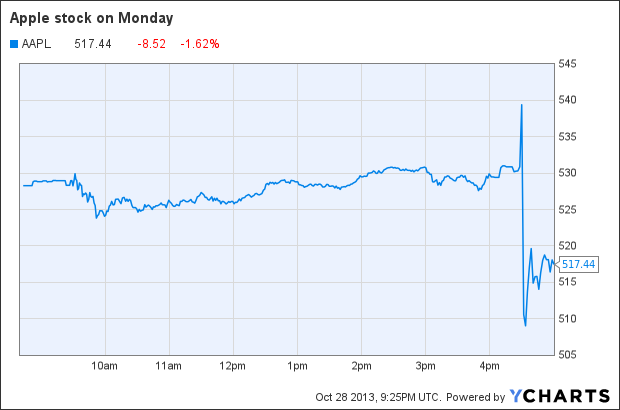