That’s hardly a simple question these days. The Los Angeles open-streets festival, which may gain a monthly spot on the calendar by 2017, isn’t just drawing increasingly large crowds and expanding into new territory, including upcoming routes in South Los Angeles and the San Fernando Valley.

CicLAvia is also a Rorschach test, a civic pop quiz that provokes extreme — and telling — reactions.

For cyclists, it offers a chance to ride on streets emptied of car traffic, of course, but also an encouraging sign of growing clout in a city long designed around the automobile.

For pedestrians, who have been pushing for an expansion of bike-free spaces in each CicLAvia, the events have been nearly as liberating.

And for drivers? For some, CicLAvia is one more annoyance, one more obstacle in a region where traffic is already punishing enough. Holding it more often is hardly on their civic wish list.

But to define people solely by mode of transportation — to say that they belong to one and only one of these various camps — is to risk missing what might be CicLAvia’s most valuable contribution.

Drivers, when they are not behind the wheel, are also pedestrians. Most cyclists also drive cars. The vast majority of pedestrians know what it’s like, as drivers, to feel the soul-crushing frustration of horrible traffic.

CicLAvia’s real importance has been to make clear that the divisions that we spend so much time debating — between cyclist and driver, driver and pedestrian, pedestrian and cyclist — are surprisingly malleable.

‘HER’: Spike Jonze’s refreshing take on a future L.A.

Drivers who ride bikes along the CicLAvia routes gain a new understanding of how their cars, hulking and hugely powerful, must look to cyclists. Pedestrians who turn cyclist for the day learn both how oblivious those on foot can be but also what it means to be in a position where their own carelessness can seriously injure somebody else.

And the cyclists, finally, who grumble about having to walk their bikes through CicLAvia’s ever-expanding pedestrian-only zones, are forced to consider how banning cars and giving bikes extra space on the street sometimes unleashes in them the same recklessness they complain about in motorists.

It’s hardly a surprise that CicLAvia — or the expansion of bike lanes around Southern California, for that matter — raises the hackles of some drivers. For more than half a century the very design of the city has supported and emphasized the idea that the roads belong to them and that anybody not using a car is an interloper at best and a threat (to their rights, freedom of movement, even happiness) at worst.

This familiar attitude suggests that every change to the city, whether it’s new architecture or new transit lines, should be weighed primarily, if not exclusively, by its impact on motorists and levels of car traffic. It has seeped so deeply into the civic consciousness that it has fundamentally skewed debate on a wide range of crucial issues.

Even former Mayor Antonio Villaraigosa, who gave CicLAvia important early support, pushed for a plan to turn both Olympic and Pico boulevards into one-way streets, a shift that would have expanded traffic lanes at the expense of literal and symbolic space for pedestrians and cyclists.

More recently a pessimistic report about the city from the high-powered L.A. 2020 Commission — “A Time for Truth” was its take-your-cod-liver-oil title — declared in its opening pages that Los Angeles is “strangled by traffic.” OK, no real debate there, except maybe with the choice of metaphor.

But when the report later turned to a discussion of mass-transit in Los Angeles, it was still concerned entirely with the rights and privileges of drivers.

“Even if all the transportation projects that were promised to be funded by passage of Measure R are built — light rail, bus service, and subway — the traffic congestion would be virtually unchanged,” the report said.

Well, that settles it. Might as well shut down the Metropolitan Transportation Authority.

New transit lines may or may not alleviate traffic, depending on how and where they are built; the research on that score is mixed. But the goal of a better light-rail, bus and subway network in Los Angeles is not to make life easier for drivers.

It is to offer new ways to get around a crowded region. And to expand the number of options in a city that has always placed a high value on individual freedom of choice.

And yet the conventional wisdom in Los Angeles, not to mention much of its political and cultural punditry, assumes not just a car-first but a car-only point of view. What good is a Wilshire Boulevard subway, that line of thinking argues, if it does nothing to make life easier for motorists?

The truth is that traffic isn’t going to get better. Period. We should stop promising that it will.

Congestion isn’t something to reflexively fear, in any case, even in Los Angeles. It is a sign of economic health and a vital urbanism.

In fact, every city Angelenos tend to idolize as a haven for pedestrians and users of mass transit and as a model of vibrant street life — whether it’s New York, Shanghai or London — is also “strangled by traffic.”

PHOTOS: Arts and culture in pictures by The Times

The problem is that drivers continue to think that Los Angeles is somehow special — that we can both pursue the ambitions of a major metropolis and expect politicians to make easing our commutes a top priority.

Maybe it’s time to stop measuring new transit initiative and other changes to the city in terms of how they’ll affect traffic. And start using traffic to measure how we’re doing in other areas.

After all, a Los Angeles with freer-flowing traffic in the future will be a less competitive Los Angeles, a Los Angeles on the losing end of all the economic and education-reform battles the authors of the L.A. 2020 report want us so desperately to win.

The notion that congestion can be a sign of economic well-being is a radical one for many in Los Angeles. It requires turning inside out many of our long-held assumptions about who and what streets are for and how they should be designed.

That’s where CicLAvia comes in. At its most basic level it is an opportunity for people to get out of their cars and see the city and its landmarks from a new angle and at a different pace.

But it is also an opportunity to try on a new consciousness for a day — to see how the kingdom of Brobdingnag looks to a Lilliputian, and vice versa.

That kind of basic perspectival shift — changing not just our literal view of the built environment but our intellectual and emotional one — is precisely what L.A. needs at this point in the city’s history, as we navigate a slow, difficult transition past car-dominated urbanism.

It promises to pay dividends for Los Angeles that go well beyond the apparent benefits — or delays for drivers — produced by closing a few streets, for a few hours, a few times per year. 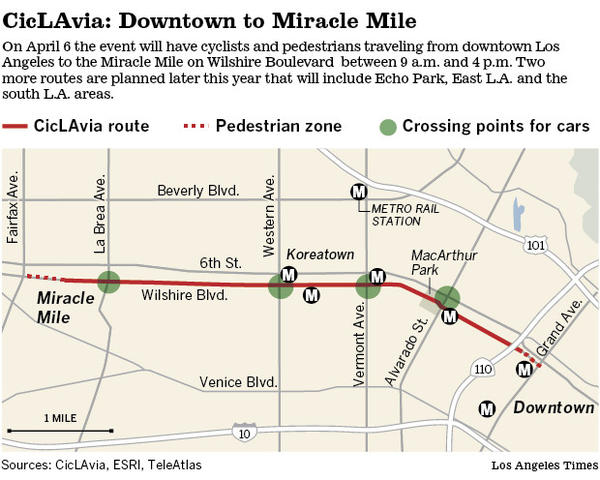