Critter suppliers to the entertainment industry blame the increasing use of digital effects, the flight of productions from Southern California, and escalating pressure from animal rights groups.

Critter suppliers to the entertainment industry blame the increasing use of digital effects, the flight of productions from Southern California, and escalating pressure from animal rights groups. 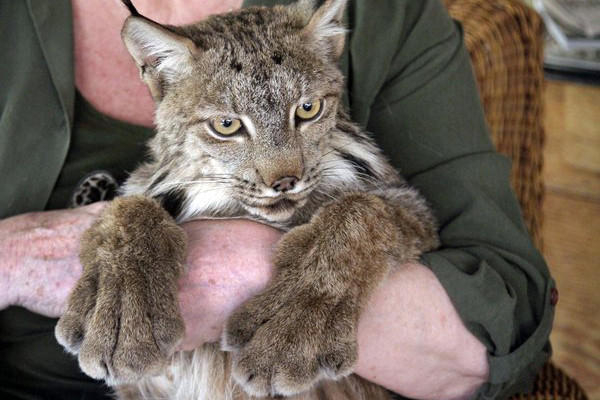 Aspen the lynx is in the arms of Gina Brockett, who is the co-owner of Brocketts Film Fauna. It's a company in Thousand Oaks that has been supplying reptiles, bugs and other animals to the film industry for more than three decades. More photos

Critter suppliers to the entertainment industry blame the increasing use of digital effects and escalating pressure from animal rights groups.

Animal wrangler Jim Brockett stands a few yards away from Arrow, like a director studying his actor.

The African augur hawk latches his yellow talons onto what looks like a severed finger — actually a piece of foam — and swoops into the air before landing on the gauntlet of a falconer (who promptly rewards him with a thawed chick stashed in a leather pouch).

"He's got the finger part down," says Brockett, who's helping train Arrow for a macabre scene in the crime drama "Bones."

Brockett, 70, and his wife, Gina, are owners of Brocketts Film Fauna Inc. in Thousand Oaks. They have been supplying hawks, bobcats, alligators, snakes, spiders, lizards and various other critters to the entertainment industry for more than three decades, operating out of a secluded five-acre ranch in the Santa Monica Mountains.

The Brocketts and their animals have made regular appearances on "The Tonight Show With Jay Leno," numerous crime dramas including "True Blood" and "CSI NY," and movies such as "Terminator III" and "We Bought a Zoo."

But they've grown increasingly uncertain about the future of their business.

"We're not going to be doing it that much longer," Gina Brockett says. "It's going to go away."

Animal trainers and wranglers, those who transport horses and other animals to sets, have been fixtures of the motion picture industry since the dawn of Hollywood. But many veterans in Southern California view themselves as an endangered species in their own right. 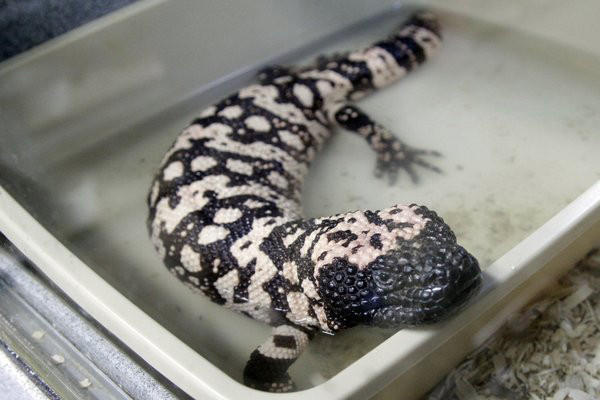 A Gila monster rests in a small tub in Brocketts Film Fauna. Co-owner Jim Brockett also has a room containing several lizards, one of which was the first gecko featured in the Geico insurance commercial, before computer-generated imagery rendered the real lizard obsolete. More photos

They cite the growing use of digital effects, the flight of film work from Southern California, as well as mounting pressure from animal rights groups.

The use of animals in film and television productions has become increasingly controversial. HBO in 2012 shut down production of its drama "Luck" after three horses died during production.

The horse deaths renewed debate in the industry about the use of animals on film sets and the role of the American Humane Assn., the group charged with safeguarding the welfare of animals in entertainment.

Tippi Hedren, the actress and animal rights activist best known for her role in "The Birds," in 2012 lobbied for a bill that would outlaw the private breeding and possession of exotic cats except at highly qualified facilities, such as accredited zoos. Similar measures have been proposed for bears and primates but have been resisted by the circus industry.

We're not going to be doing it that much longer. It's going to go away. ”

Although none have been approved by Congress, animal wranglers like Jim Brockett view them as a threat to their livelihood. He and his peers contend that People for the Ethical Treatment of Animals and other groups pressure filmmakers to avoid using live animals on sets, and constantly lobby federal and state agencies to impose costly rules aimed at driving them out of business.

"I would have to say they are not wrong," says PETA spokeswoman Lisa Lange. "We'd like to see them pursue other careers. We do want to see a complete end to the use of wild animals in film and television, and we're getting there."

Brockett's face tightens when the subject turns to animal rights activists who criticize his trade. He insists the film and television industry has helped to educate the public about the animals the activists think they're protecting.

"No one would care about dolphins," he says, "if there wasn't a TV show like 'Flipper.'"

Brockett's journey into the animal kingdom began nearly four decades ago, when he graduated from Cal State L.A. with a degree in zoology, headed south on his motorcycle and kept riding — all the way to Brazil. Running out of money, he started exporting wild animals to zoos and dealers throughout the world.

Over the next five years, he lived in nine countries in Central and South America, at one point living on a houseboat on the Amazon River.

Jim Brockett takes us for a tour, presenting the hawks, bobcats and tarantulas he has to offer.

When he returned to California in the late 1970s, Brockett started his own import-export business supplying animals. His large inventory of animals, many of which were rescues, drew studios interested in using them for their films.

He met Gina through a mutual friend (she had dated the film editor on the TV series "Grizzly Adams") and invited her on a trip to Los Angeles International Airport to pick up a 25-foot python.

"It was an interesting first date," Gina says.

The couple married and launched their company in 1978, supplying animals to dozens of TV shows, Hollywood blockbusters and B-horror films such as "Kingdom of the Spiders" and "Alligator II: The Mutation."

Gina Brockett is the self-described "cat weirdo." She keeps photos on the wall of her favorites, including a bobcat named Ruby Rose who recently appeared on "Bones" (gnawing the arm of a fake body) and a Lynx named Aspen, who often wanders around the house.

"We call her the crazy cat lady behind her back," says Jim Brockett, a burly man with an easygoing demeanor whose specialty are reptiles. (The company's logo is an alligator lunging out of a film reel.)

The couple have as many as 400 animals; most come from breeders, but many are also rescue animals. There is also a building with thousands of spiders, hundreds of scorpions and snakes, five types of cockroaches, and an assortment of giant mealworms and beetles. Brockett recently shipped a box of 3,000 cockroaches and beetles via FedEx to Louisiana for the TV series "Salem."

Also popular among crime shows are "movie maggots," which are actually moth larvae. Brockett says, "They're bigger, they're less disgusting and they show up better on camera."

The Brocketts' living room walls are lined with stuffed animals and reptiles, along with photos of films they've worked on since the late 1970s. 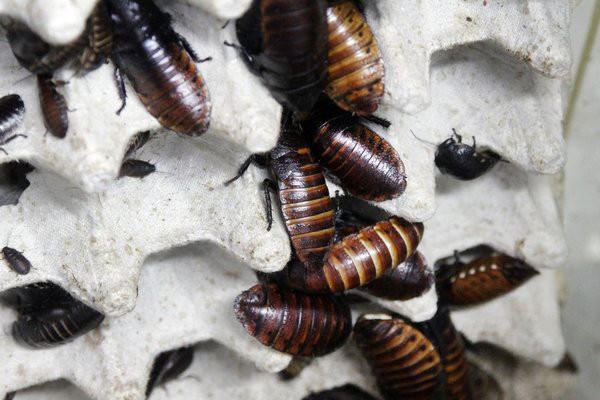 "That's Big Bob from 'Arachnophobia,'" Brockett says, pointing to a tarantula mounted on the wall.

An 18-foot stuffed python runs the length of the living room. Before dying of old age, the python joined a Brockett alligator for a scene in the 1998 movie "The New Swiss Family Robinson."

"When we were looking for houses, we had to have a 20-foot living room so we could have room for him," he adds.

Next to the python and a mounted antelope head is a stuffed monitor lizard that had been trained for the 1990 Marlon Brando movie "The Freshman." Brockett transported seven of the lizards to the film set in Toronto. To help "tame" the lizards so they would be used to humans, Brockett fed them by hand and walked them on a leash, often on a treadmill.

"If it bites [Brando], that's not a good career move for me," Brockett says.

"We also have the guy in the back glass there," he says, turning to a glass tank in the corner of the room where several lizards are scurrying about. It contains the first gecko featured in the Geico insurance commercial — before computer-generated imagery (CGI) rendered the real lizard obsolete.

Now they use CGI and we're done. We couldn't make our [animals] talk. ”

He sees the writing on the wall with the 2012 Oscar-winning Ang Lee movie "Life of Pi," in which the tiger was mostly a digital creation.

Some animal trainers have found novel ways to adapt to the digital revolution.

A company called GreenScreen Animals of Santa Monica has found a lucrative niche supplying stock footage, shooting video of wolves, lions, bears and other big-game animals on a giant green screen stage, which can then be rendered as a forest, mountain, parking lot or school crosswalk.

"Animals never go out of fashion," GreenScreen co-owner Mark Shockley told The Times last year. "Our footage is only going to grow in value."

Brockett has his doubts. "That's the last time your elephant or wolf is going to go to work," he says, "because at that point they have everything they need on a green screen."

As a truck drives by the ranch, a low, throaty growl emanates from a concrete pond, where a group of alligators lounge in swampy green water.

"Hear that noise?" Brockett says. "It's an alligator bellowing. He thinks the truck is another alligator."

Brockett keeps as many as 30 alligators. "Our alligators do all the Lubriderm commercials."

Brocketts Film Fauna charges by the day to rent its animals for film crews. Chickens cost about $200 a day, while a large alligator or king cobra snake would cost $1,500. 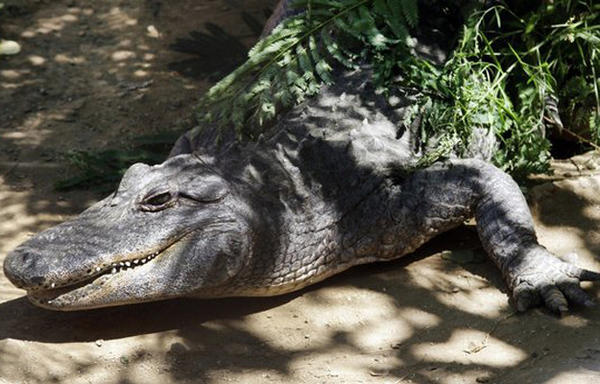 An alligator roams the ground in Brocketts Film Fauna, just one among the 30. "Our alligators do all the Lubriderm commercials," said co-owner Jim Brockett. More photos

But it costs as much as $15,000 a month to feed the animals, whether it's kibble for alligators, beef-based food for bobcats, and rats and mice for the snakes. There's also an additional $8,000 a year to truck in sufficient water.

Last year the company had 30 jobs in one month alone. But the orders aren't as large as they used to be, and business is down as much as 40% from 15 years ago, Brockett says.

Teamsters Local 399 has seen at least a 50% drop in the number of animal wranglers over the last decade, says Ed Duffy, the union's business agent.

"These trainers have spent years working with their animals and teaching them what is necessary to perform in front of the camera," Duffy says. "They are really fighting for jobs right now."

About 20 trainers have left the business or retired in the last three years because there wasn't enough work to go around, Duffy says. The union now has 90 trainers and 21 wranglers, most of whom live in Southern California.

"Long-term it just gets harder and harder to do this stuff," Brockett says. "Gina and I are probably going to retire next year." 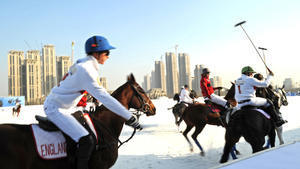 These senior amigas long for the ride 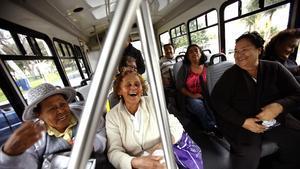 I'd rather hang out with my amigas on the bus” 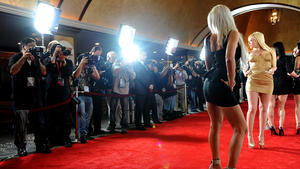 Richard Verrier is investigations editor for Arts and Entertainment at the Los Angeles Times. He has been with The Times since 2001 and has run our Company Town since 2016. After stints at the St. Petersburg Times and the Orlando Sentinel in Florida, Verrier joined the paper as a reporter, and for many years covered all aspects of the entertainment industry before turning to editing. He oversees the Company Town coverage while working to guide and edit investigative and enterprise reporting across the entertainment team, collaborating with writers and editors from all departments. He is a native of Montreal and a graduate from the University of Toronto and Columbia University’s Graduate School of Journalism.