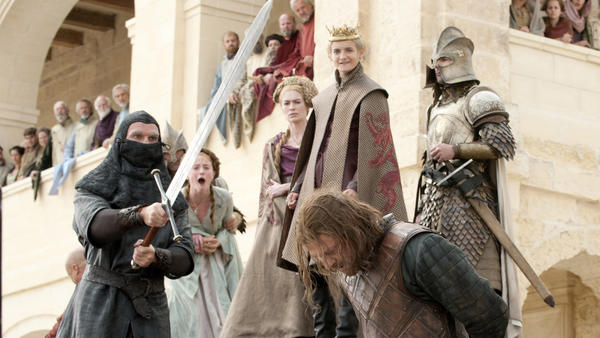 Ned Stark, honest to a fault in "Baelor." (HBO)

This Sunday "Game of Thrones" will unveil its penultimate episode, "The Dance of Dragons." And if the past is any indication of what lies in store for viewers, we're expecting big things. The ninth episode of "Game of Thrones" is almost always the game-changer, but let's take a closer look and spotlight the second-to-last bloodbaths from the past. Warning, spoilers ahead.

Traditionally the final few "Game of Thrones" episodes of the season are usually the most brutal for both the audience and the characters. But the ninth episode always comes out swinging. More often than not, the entire tone of the series will pivot based around what transpired in the second-to-last "Game of Thrones." Starting all the way back when HBO sword dropped on Eddard Stark in "Baelor."

Episode: "Baelor"
The conclusion of the trial of Eddard Stark; it doesn't end well.
The Epic Moment: The painfully earnest and excruciatingly noble Ned bends the knee and confesses to treason he did not commit in hope of finding mercy from King Joffrey Baratheon. King Joffrey responds by cutting off his head in front of his daughters.
Everything Else: Jaime Lannister is captured by Robb Stark's army, and across the narrow sea, the Dothraki leader Khal Drogo falls closer and closer to death while Daenerys Targaryen goes into early labor with his child. But really it's kind of hard to remember any of these moments after Joffrey gleefully commands the executioner to bring him Ned's head.
How It Changed The Game (...of Thrones): This episode allowed "Game of Thrones" to show the world its true, blood-stained colors. With one thwack of the sword, HBO and George R.R. Martin revealed that they were unafraid to kill off their main character in broad daylight in front of a bunch of children. It's easy to forget that Ned's execution isn't even the final moment of the season (that moment goes to Daenerys emerging from the ashes with her dragons) because his death was that good. Plus this action would spark the very war that the series is still entangled in right now.

Episode: "Blackwater"
Instead of bouncing around Westeros, "Blackwater" chose to focus solely on Stannis Baratheon's intended siege of King's Landing. Joffrey keeps it consistent by acting like an insufferable nightmare, while The Hand of the King, Tyrion Lannister, mounts an impressive plan to defeat Stannis' invading armada.
The Epic Moment: Bronn fires a flaming arrow at Stannis' approaching fleet, igniting the gallons of wildfire Tyrion had been dumping into the bay. Stannis' ships (and men) burn in the green flames. The green men ablaze and trapped on a burning sea, aboard a simultaneously burning ship could almost be considered almost beautiful if it wasn't so horrific.
Everything Else: Hidden in a secret chamber in the Red Keep, Cersei Lannister gets blotto on the House of Baratheon's good stuff accompanied by Sansa and a gaggle of super uncomfortable attendants. Cersei proceeds to get mean girl drunk and toy with the idea of family suicide via deadly nightshade while perched atop the Iron Throne, proving she's practically allergic to good ideas.
How It Changed the Game (...of Thrones): The massive failure to sack King's Landing sends the would-be king north and right into this season's predicament as Stannis readies another attack on the House of Bolton at Winterfell. Plus it opened the doors to centralized episodes. Refocusing on just a few characters under the scrutiny of battle allowed for a lot of interesting growth and reveals. The Hound mutinies, Sansa finds courage and Tyrion realizes he's perfectly capable of leading the charge into battle (in spite of his family's assassination plot against him).

Episode: "The Rains of Castamere"
Angry grandpa of Westeros, Walder Frey, gets his revenge on the Stark family for going back on their promise to wed Robb Stark to one of the Frey daughters… by also breaking a promise.
Epic Moment: The Red Wedding. The scene that broke the mold for all penultimate episodes everywhere (or as Daenerys would put it, broke the wheel). Walder Frey lures the Stark family into his home under the pretense that all is forgiven thanks to a last-minute wedding between Edmure Tully and Roslin Frey. But once "The Rains of Castamere" plays the bloodshed begins. Catelyn Stark, Talisa Stark, her unborn child, and Robb are all murdered. The Stark family takes the biggest hit, hopefully mounting a future vengeance rampage by the Stark ladies Sansa and Arya.
Everything Else That Happened: Daenerys takes control of the city Yunkai, the Wildlings continue to move south and Arya Stark misses her family again.
How It Changed the Game (...of Thrones): The Internet outrage/dismay was nothing short of sensational. Twitter erupted into the five stages of grief. Denial (maybe Robb survived his many arrows and stab wounds; he did not), anger at the series showrunners, bargaining (we promise to stop complaining about Bran's storyline if you bring back Catelyn), depression over the loss of the wolf in the North and eventually acceptance that George R.R. Martin's insatiable thirst for character death will never be quenched. On the plus side, the all-knowing, book readers were wildly entertained by the outrage. The plot twist would forever push the Starks into the underdog category, where they currently remain. Fingers crossed, Sansa's time will come.

Episode: "The Watchers on the Wall"
Similar to "Blackwater" (which was also directed by Neil Marshall), "The Watchers on the Wall" was centered entirely on the battle at Castle Black. The Wildlings take on the woefully unprepared Night's Watch, but in the end the Crows rally.
Epic Moment: Mance Rayder makes good on his vow to "light the biggest fire the North has ever seen!" As his Wildling troops march on the wall their army looks positively on fire. In addition there's the throw down in the ice tunnel between a couple of Crows and a very angry giant. And as the monstrous warrior approaches, the members of the Night's Watch greet their impending doom (and rally their courage) by shouting their sacred oath. But perhaps it's Jon Snow's long action shot across the wall that really sticks out as the big takeaway.
Everything Else That Happened: Ygritte died at the hands of the nefarious Olly. A character we're not sure exactly what to think of right now.
How It Changed the Game (...of Thrones): Jon Snow proved his worth to the Night's Watch, setting himself apart as both a leader and a great fighter. And really this big Jon Snow showdown helped the audience cheer on the forlorn pretty boy. We finally got to see what he could really do. All that plus this was truly a fantastic action sequence that has only raised the bar for all future "Game of Thrones" wars to come.

There's no way to truly know what will happen tomorrow in "The Dance of Dragons." Especially since showrunners David Benioff and D.B. Weiss have begun to slowly veer away from the source material this season (combining Sansa's story with book character Jeyne Poole, adding new characters and plot twists). HBO has teased out Jon Snow's return to Castle Black and is hinting that perhaps something interesting will finally happen in Dorne (but they're certainly not making any promises). However, one thing is certain after last week's Night King vs. Jon Snow showdown at "Hardhome," it has a lot to live up to.