Chauffeurs are the driving force for stars on Oscar night

The Academy Awards will draw more than 1,200 cars and SUVs to the Dolby Theatre on Sunday. The chauffeurs keep stars’ secrets close and aggressive fans at bay.

The Academy Awards will draw more than 1,200 cars and SUVs to the Dolby Theatre on Sunday. The chauffeurs keep stars' secrets close and aggressive fans at bay.

Chauffeurs: a driving force for stars on Oscar night 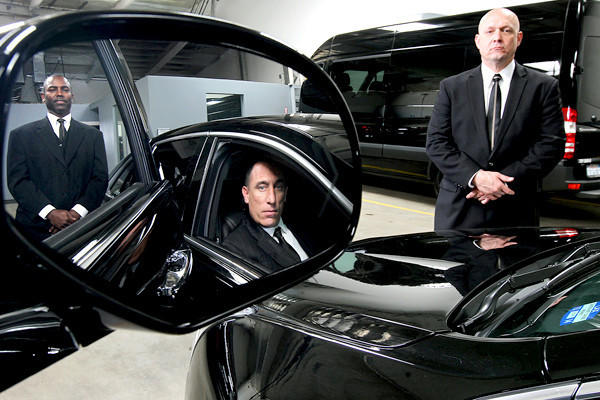 The Academy Awards will draw more than 1,200 cars and SUVs to the Dolby Theatre on Sunday. The chauffeurs keep stars' secrets close and aggressive fans at bay.

The limos are gassed and the chauffeurs, GPS apps glowing from hand-helds, are plotting routes for Sunday's Academy Awards at the Dolby Theatre in Hollywood. The drivers are the captains of a sleek, passing fleet of more than 1,200 cars and SUVs that will navigate police perimeters, barricades, bomb squads, helicopter searchlights, hundreds, maybe thousands of fans and probably a few stalkers lingering beyond the paparazzi flash.

"A 15-block-radius maze," said Christopher Smith, a chauffeur who doubles as a bodyguard and who in a previous life was a drug and alcohol counselor. "It can be crazy. If you don't have the right pass, you're not getting by.... The bomb squads may be putting tape on trunks this year to make sure they've been checked."

"It's like crossing into another country," said Reggie Colwell, whose black tie with the gold stripe ran like a ruler down his chest. "After we drop the client off, we go to the Hollywood Bowl to wait. The bowl is filled with limos. They feed us."

Smith and Colwell drive for KLS Worldwide Chauffeured Services, owned by Alex Darbahani, whose first celebrity client was Jennifer Lopez. He did two of her weddings but not the doomed one to Ben Affleck, which was called off even after 150 cars were ordered and paid for. Darbahani, whose trade demands discretion, wouldn't cough up details on that broken romance, and anyway, the buzz these days is who will wear what and who will roll home -- in one of his cars, hopefully -- with a gold statuette.

Darbahani, whose rates on Oscar night range from $1,200 to $5,000, has watched the rise of the SUVs -- Lincoln Navigator and Cadillac Escalade -- and the fall in popularity of the 10-mile-per-gallon stretch limo. ("That market is not big. It's for the executive producer.") Demands for environmentally friendly cars have tapered too. "People used to ask for Teslas and hybrids," he said. "I don't see many Priuses on the red carpet. That was something fashionable but it's gone." 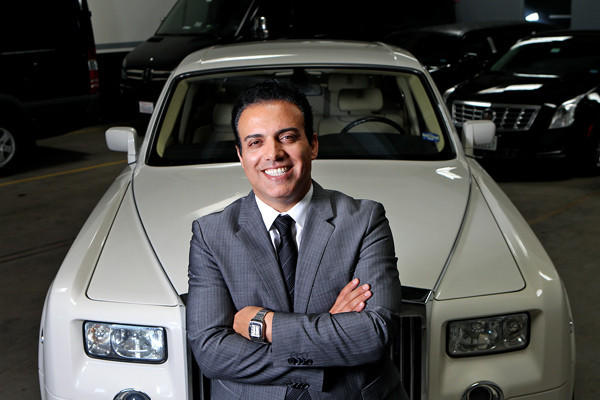 KLS Worldwide Chauffeur Services CEO Alex Darbahani: "I don't see many Priuses on the red carpet. That was something fashionable but it's gone."

The drivers were gathered in KLS' garage near Van Nuys Airport. Clean floor, a faint scent of grease. A mechanic poked beneath a hood polished black. Not a smudge or fingerprint in sight. Solid men, the kind you'd trust your diamonds with, the drivers spoke of an Academy Awards terrain with an increase in "let's say aggressive fans" and a possible trip to fill a prescription at CVS. Like cops, the men had razor-quick, summing-up looks in their eyes.

"You don't know what you'll see out there," Colwell said. "You can get caught up in a car chase. A graffiti artist one time came up to a wall near where I was parked and I said, 'He's not going to tag that right now, is he?'"

"You keep the fans at bay from the approaching talent," Smith said. "I've driven a lot of rappers. They're typically the ones who need security -- high-risk clients."

A good chauffeur knows the human heart as intimately as he does a Beverly Hills side street or the quiet expanse of a pre-dawn highway. If a car is power, a limo or an Escalade is potency personified, society's fuel-injected separator for those on different sides of the velvet rope. Affable as he is, Darbahani, who finds the Oscar crush both frenetic and gratifying, won't reveal his current clients, although you get the feeling he'd love to. His past roster at KLS included Michael Jackson and Christina Aguilera.

A good chauffeur knows the human heart as intimately as he does a Beverly Hills side street.

"KLS. CIA. Secrecy," said Darrell Hollinquest, a chauffeur who once danced in Jackson videos and had his own small production company. "It's a coat of arms you put on for anyone from an 8-year-old kid to the Dalai Lama. Everyone's a VIP."

What happens in the car on Oscar night, or any other, stays in the car, kind of. Like Vegas, Smith said. Sex can flash in the rearview, not a lot but enough to remember. A client from Paris wanted to be greeted with a bag of In-N-Out burgers; a business executive hired a driver to fly her phone, which she had left behind, from L.A. to San Francisco; Smith once drove a pair of golf clubs more than 300 miles to Pebble Beach, noting he was told, "they better be there by 5 a.m. or heads are going to roll."

Celebrities often run late, fixing hair and makeup, wardrobe in tow. "I've had some of the most beautiful people in Hollywood getting dressed in the back of my car," Colwell said. Billionaires tend not to be big tippers and Marilyn Manson is more polite than one might imagine. Some clients are know-it-alls about traffic; others vent life's cruelties as if the chauffeur is a trusted hairdresser. Smith once drove a hand surgeon who "treated me like a nephew and tipped me $4,000. I was crying driving home."

But few can top the story of one particular KLS client. 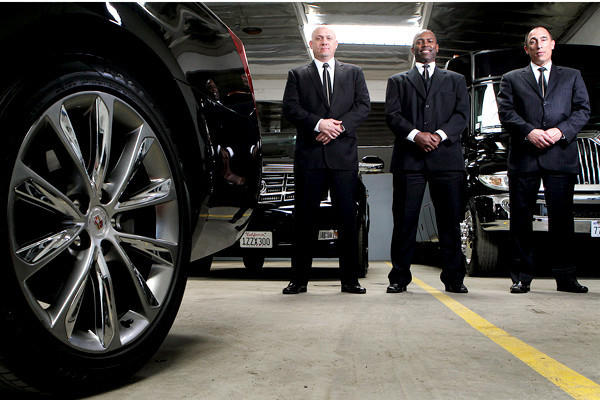 "A white shih tzu," said Darbahani. "A stretch limo goes and picks this dog up -- it's the same driver each time so the dog knows him -- and takes the dog to a dog hotel in Hollywood. The dog gets his massage and takes a swimming class, and, this is true, the driver's with the dog and the bill comes to $2,200, which includes the car, grooming, training and a special shot. Same deal every Wednesday."

Who tips, who doesn't; who's polite, who's not isn't defined by money or stardom: "It's just the way they were raised," said Smith, a chauffeur for 20 years.

"You know from hello what they'll be like," Hollinquest said.

Drivers travel amid Cartier, Versace and Louis Vuitton. They are not rich but they seek their own successes. "I do feel connected to that world," said Hollinquest, who grew up in Watts and attended UCLA. "I have dreams and aspirations too. I've had life-altering conversations with people during a 20-minute trip about sticking to your dreams and passions."

"Sometimes a 20-minute ride turns into 10 years of loyalty," Colwell said. "Some of the people who have a lot more than I have a lot more problems. I couldn't afford to have their problems."

Sometimes a 20-minute ride turns into 10 years of loyalty”

KLS is one of the big limo companies in Los Angeles that have fleets of between 35 and 400 cars. Darbahani said there is plenty of work and that for big events such as the Oscars and the Grammy Awards, he farms out some of the business to smaller firms. He expects to have at least 90 cars out on Sunday night.

A native of Stockholm, he came to the U.S. in 1992 as a foreign exchange student at Santa Monica College. "The weather and the surfing kept me here," he said. "I worked as a production assistant.... I was the guy who booked all the limousines. And in 1998 I thought, 'Why don't I start my own business?'"

When asked what KLS stood for, he smiled and said: "Nothing. The letters just sound good together."

He opened a car door. "Smell the interior," he said, "Fresh." He said his drivers know the cities, streets and hotels; the beach roads and the out-of-the-way places. They are everywhere, yet invisible in the black suits and ties he has designed for them.

"They're highly educated butlers," he said. "They know where to get the dog food in the middle of the night." 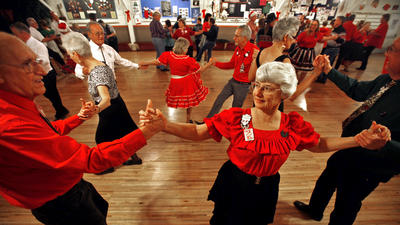 ”When members gather for a dance, a lifetime's struggles vanish." 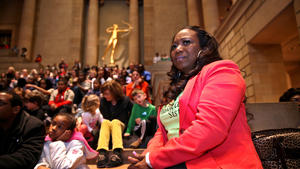 .”This whole thing has to do with saving lives, not just marching in front of the cameras" 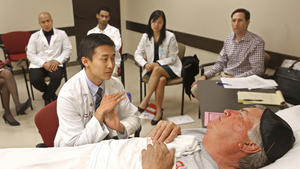 ”It's a rare opportunity to do improv without comedy. Everything that defines acting is here."

Jeffrey Fleishman is foreign and national editor at the Los Angeles Times. Previously, he was a senior writer on film, art and culture. A 2002 Nieman fellow at Harvard University, Fleishman was a Pulitzer Prize finalist in feature writing. A longtime foreign correspondent, he served as bureau chief for The Times in Cairo and Berlin, and was previously based in Rome for the Philadelphia Inquirer. He has been a finalist for the Goldsmith Prize for Investigative Reporting and a finalist for the Center for Public Integrity’s Award for Outstanding International Investigative Reporting. He is the author of five novels, including “Good Night, Forever” and “Last Dance.”