Most music fans know that Ringo Starr was the drummer for the hottest band out of Liverpool, England. Starr also likes to point out that he could make that claim long before he joined the Beatles in 1962. As drummer for Rory Storm & the Hurricanes, Starr belonged to Liverpool’s most popular band before he completed the lineup that became known as the Fab Four and the group began its rise to pop music world domination.

Why did Starr take what could have been considered a step down to join John Lennon, Paul McCartney and George Harrison before there was any degree of certainty they would become international sensations?

“I just loved their front line,” Starr, 75, told the The Times this week while discussing the publication of the mass edition of his book “Photograph,” published in 2013 in a deluxe limited edition volume. The book contains pictures of him but mostly shots he’s taken over the last 60 years as a passionate amateur photographer, highlighting the eight years he and the rest of the Beatles were together.

“It was a risk,” he said. “But the Beatles were a little harder than Rory. More rocking. We were more of a show band. We had suits—ha, ha! … It was their attitude, it was their songs. Even then it was more edgy than Rory & the Hurricanes. Even if we were doing the same songs, they did it with more of a leather-jacket attitude, not the red suits.”

The Times asked Starr to elaborate on five images from the book, which will be available Sept. and the moments in his career they capture. Proceeds from sales of “Photograph” benefit the nonprofit Lotus Foundation established by Starr and his wife, actress Barbara Bach, that supports a wide range of philanthropic causes.

Starr is scheduled for a public question-and-answer session about the book, at the El Rey in Los Angeles, and then embarks on another round of concerts with his All-Starr Band starting Oct. 1 in San Francisco, concluding Oct. 31 in Brooklyn, N.Y. 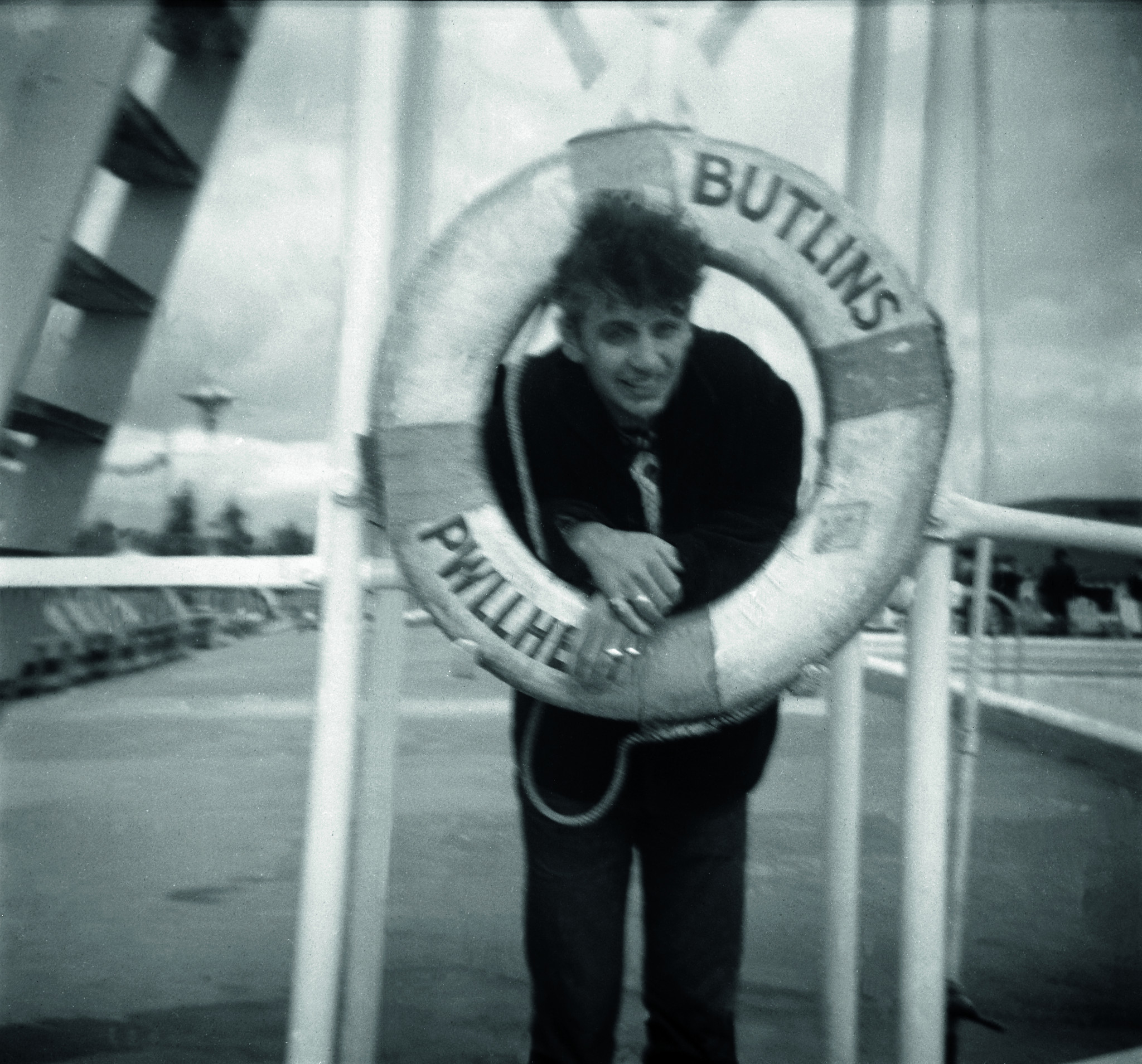 Question: This was a pivotal moment for you, wasn’t it?

Starr: It was when I went professional. In 1960, we got this gig for a couple of months at this holiday camp [in Wales]. I was working in a factory - till that moment. We took a chance. Yes, it was a risk. My family called a gathering, because I was an apprentice engineer. [They told me] that being an apprentice, you know, drumming is all right as a hobby (laughs) - like that was said in those days. And I thought, ‘No, this is what I want to do; this is a great opportunity.’ I didn’t know where it was going, of course. But in all honesty, I’ve done really well. Ha, ha, ha. [My parents] weren’t really happy with my decision, nor my uncles and aunties who came to the house to talk to me. But I thought, ‘No, I’m off. I’m going. It’s a great thing I want to do. Even the guys in the factory, and the foreman [said] ‘You’ll be back—brushing the floor! Because you’d lost your credibility as an apprentice. You’ve blown it. You’ll have to be just a laborer.’ You don’t know, but you’ve got to take a chance. And I loved to play. So I followed my dream. That was how it was. Sometimes you’ve just got to take a huge leap of faith. 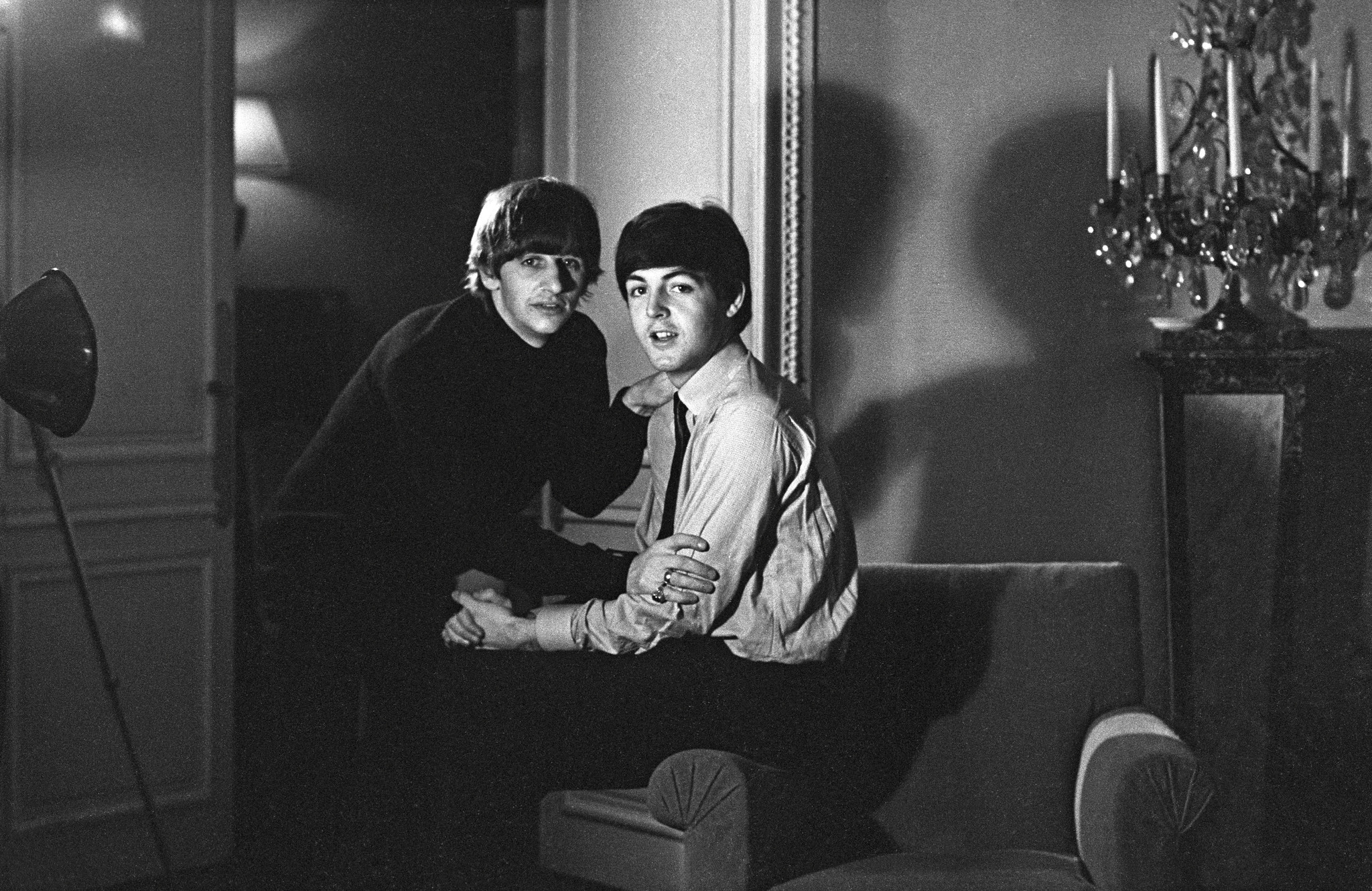 Starr: I love this one. It looks like we were caught in some weird action. Because it’s on the timer, you’re always waiting, it didn’t go ‘beep, beep, beep’ in those days. It just eventually went - SLAP! - got ya! I just love it that we were so surprised. It’s in a hotel in Paris. Look at the light! The light is great. You know, I’m not a professional; I just like taking shots. I should take the queen’s picture. 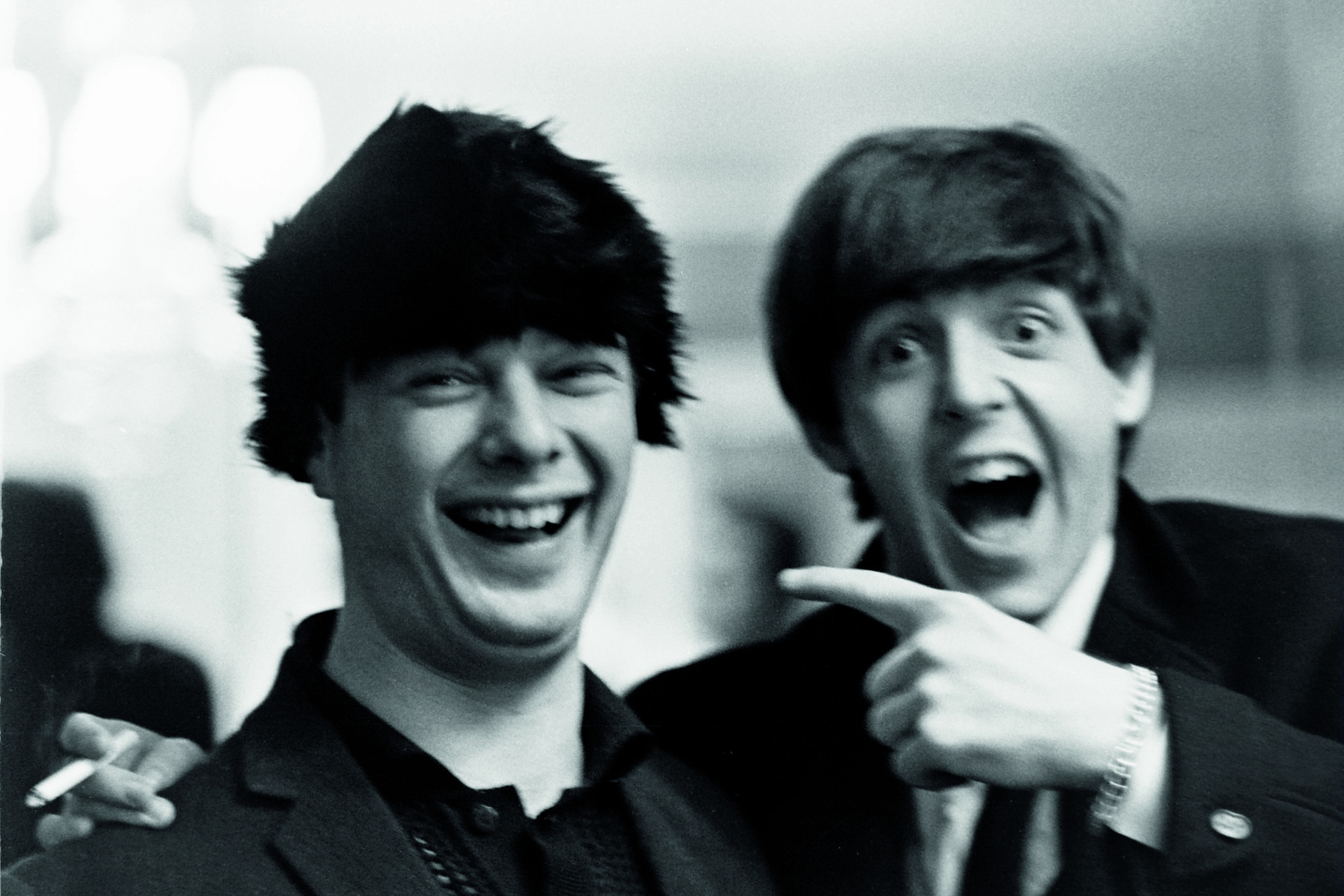 Starr: Even though it’s out of focus, people mention that you feel the moment. There’s also one with George Martin [in a Beatles wig]. 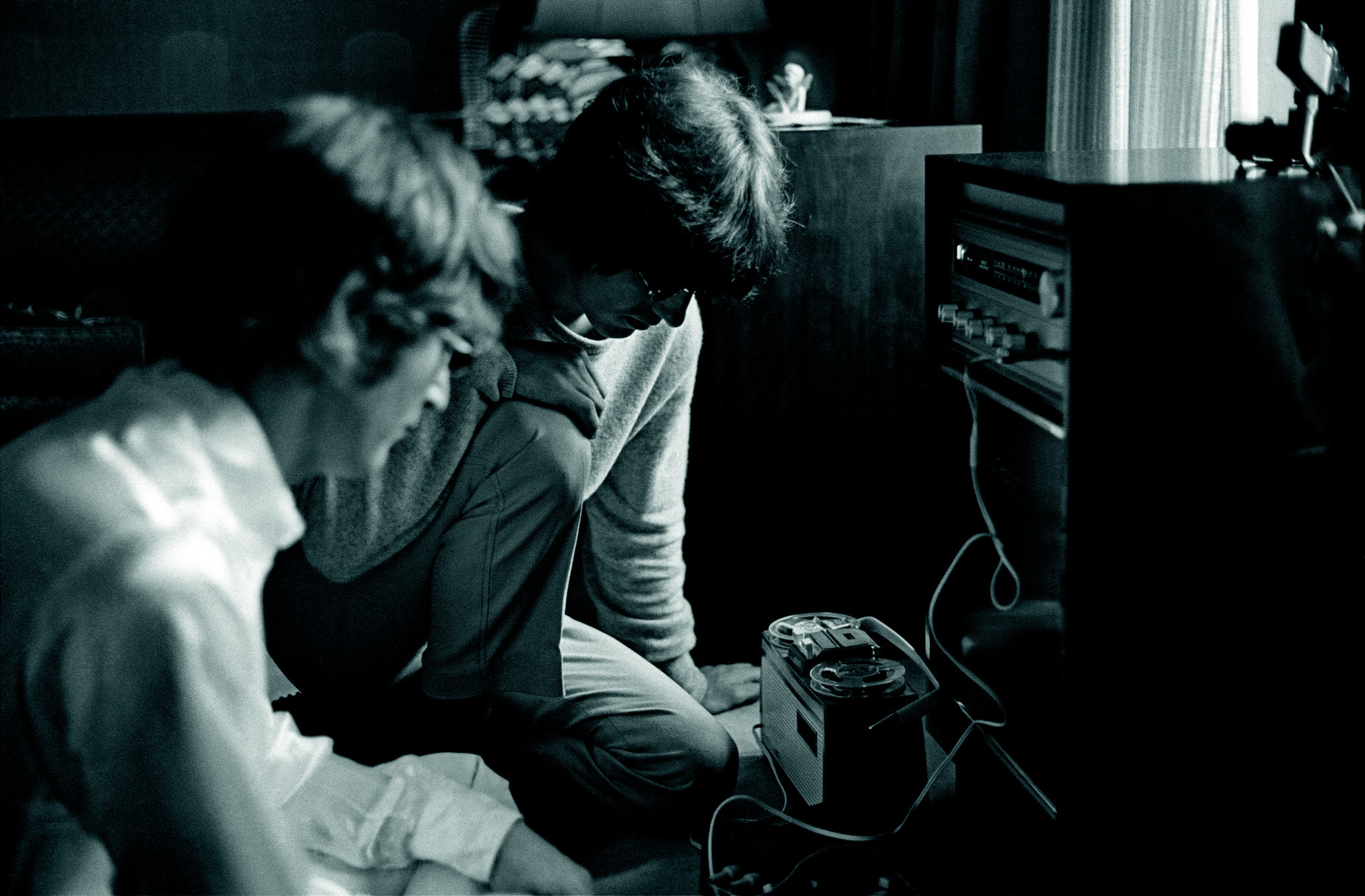 Starr: You’ve got to love that. The state of the art! Ha, ha. That was in Japan. It was so far out, but they had the speakers in there so we could hear it. I don’t know what [the song] was, though. That’s the drag.

Question:Was it a Beatles song?

Starr: I think so. I think we were listening to a mix or something. That could probably be—what?— ‘Revolver’? The reel to reel of that size, we would get whatever we had worked on that day. And because John, not being mechanically trained (laughs), he put the tape in the wrong way, and that’s how we got to the backwards guitar. It wasn’t like we planned, ‘What if we do this?’ He put it on upside down, and he came in the next day and said, ‘You can’t believe this!’ And that’s how we used it. 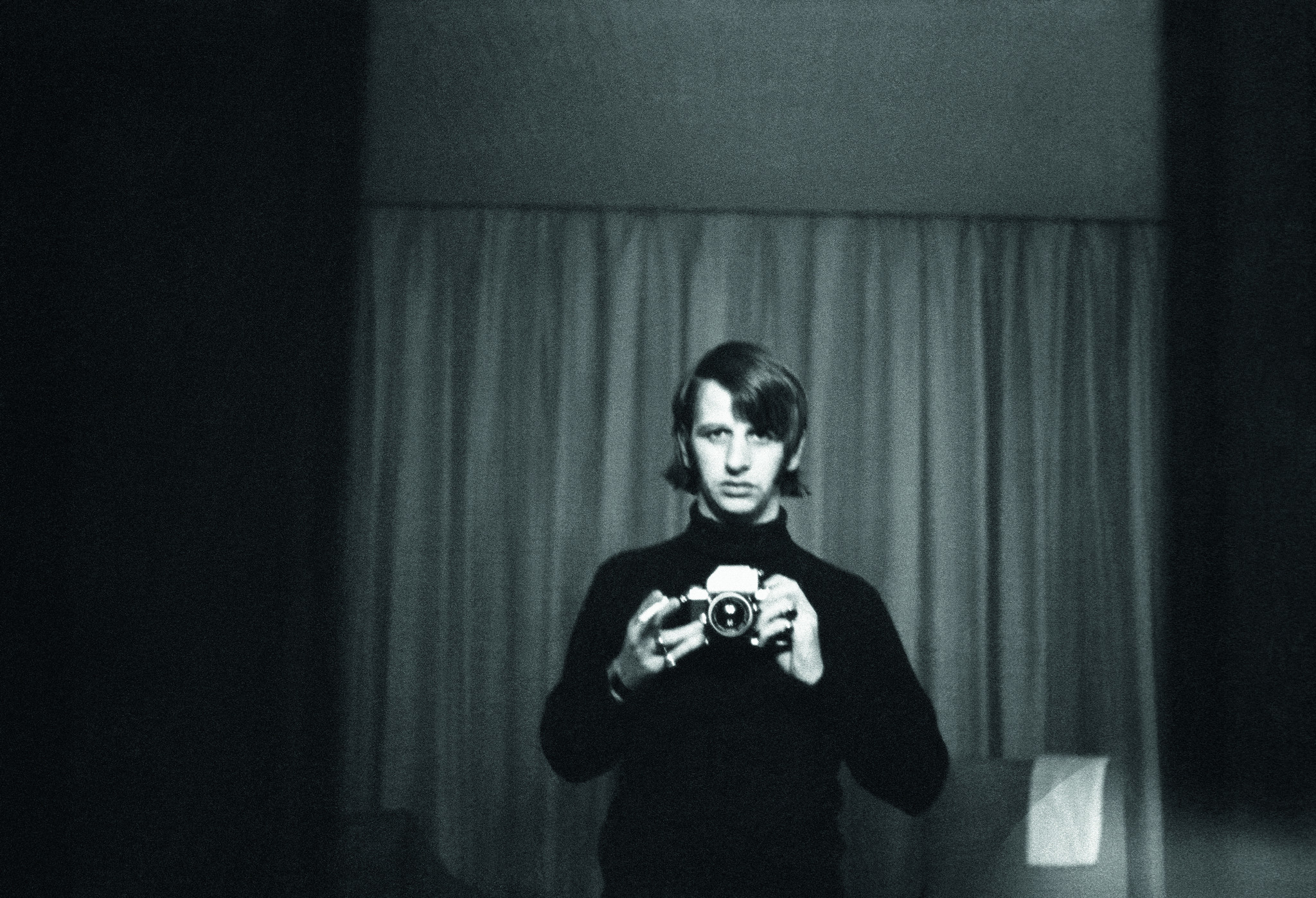 Starr: We like to say it’s the first selfie. What is that '66-'67? I’m guessing by the length of my hair. Maybe it’s just before. It could have been an Olympus or a Nikon [in his hands], I can’t be sure. What can I say, I look gorgeous! If you’ll look at them, you’ll notice that in 90% of the photos of the four of us, we have a drink or a cigarette in our hands. That’s what we were like.

Question: Unless one or more of you had a camera in their hands?

Starr: You know, I was talking to Paul and I was talking to Olivia [George’s widow] about it. I have this idea: I’ve got lots more pictures, and it’s all for charity. I was saying to Paul the other night, ‘Have a look’ [through your photos] because I’ve got photos of John, George and Paul with cameras. I was shocked the other night because I discovered one of Paul holding a Hasselblad! Oh, what is that? But the idea would be for him to pick 25 photos, Yoko pick 25 of John’s, Olivia 25 of George’s, and I’ll have another 25, and we have another charity book of great photos. And I’ll be in a lot more of them!

Foo Fighters and friends at the Forum: 5 thoughts on Monday's show

Does Adele have her sights set on Taylor Swift's double play?