‘Mad Men’ countdown: 10 moments Sally Draper will need to discuss with her therapist


When “Mad Men” debuted on AMC, Sally Draper was a cherubic five-year-old with a mop of blond ringlets and an adorable lisp. Nine fictional years later, she’s a boarding school student with a smoking habit and a perfectly sullen teenage eye-roll.

Along the way, the eldest Draper child has been exposed to enough family dysfunction to necessitate a few decades’ worth of intensive therapy. (Good thing her dad has plenty of loot.) Here are a few childhood moments she’ll probably need to unpack. 1. The time her beloved grandfather let her drive. In the Season 3 episode “The Arrangements,” Sally -- then about 8 years old -- goes out for a spin with her grandfather. The only thing is, she’s the one at the wheel of his Lincoln. Sure, she made it home safe and this pales in comparison to some other incidents in her life (more on those later). But an 8-year-old driving? Come on! It should be noted that Gene Hofstadt did not seem to be too concerned about appropriate boundaries for children. In the same episode, he gives Bobby a helmet that belonged to a Prussian solder he shot in World War I. Warms the heart, doesn’t it? 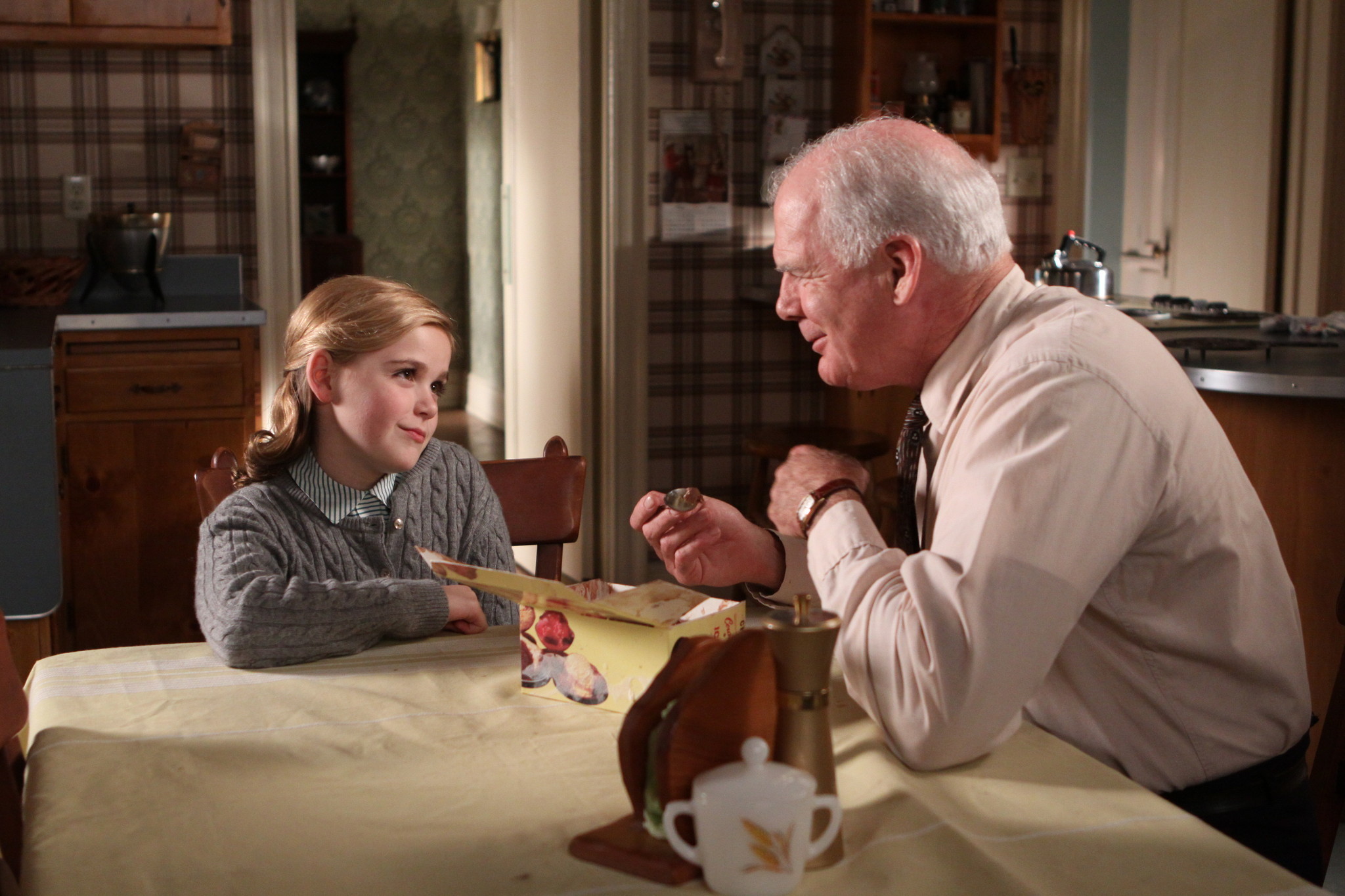 2. The time her beloved grandfather died. When a policeman delivered the news of Gene’s death, Sally’s mother Betty was so shocked she slammed the door behind her, leaving Sally outside to weep alone on the front steps. Soon afterwards, Betty gave birth to a baby boy she named Gene, after her father. Preoccupied with death, Sally started asking questions at school about slain civil rights activist Medgar Evers and became convinced that baby Gene was her grandfather’s ghost -- he even slept in the same room. Betty tried to make Sally feel better by giving her a Barbie doll “from baby Gene,” but succeeded in freaking out her daughter even more. Poor old Barbie wound up in the bushes. 3. The time her mom made her see a psychiatrist for no real reason. It all started when Sally gave herself a haircut while staying over at Don’s -- and Betty, who was really mad at Don, reacted by slapping her across the face. Then Sally was caught in the middle of some very typical adolescent self-exploration at a friend’s sleepover. Betty shamed her daughter (“You don’t do those things, you don’t do them in private and you especially don’t do them in public!”), threatened to cut her fingers off and made her see a child psychiatrist a whopping four times a week. Then Betty used Sally’s time with Dr. Edna for herself. 4. The time she showed up unannounced at Don’s office. At a low point in her relationship with Betty, Sally decided to run away to the city to be with her dad. She made it onto the train before a stranger found her and escorted her to the offices of Sterling Cooper Draper Pryce. After an initial bit of awkwardness heightened by Miss Blankenship’s untimely death, father and daughter shared a sweet day of bonding and some rum-soaked French toast. But things got ugly when time came for Sally to go back to Ossining with Betty. refusing to go, she ran down the hall of SCDP in protest -- and wiped out in front of half the agency. 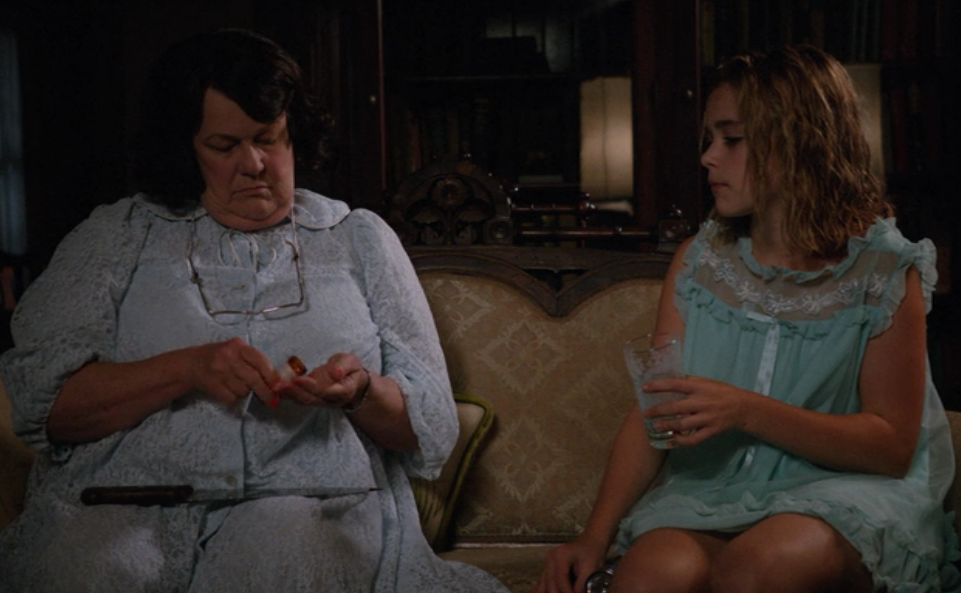 5. The time her step-grandmother Pauline gave her a sleeping pill. In by far the creepiest “Mad Men” episode ever, Sally was unable to sleep after reading headlines about mass murderer Richard Speck and turned to Henry’s Bugle-munching mother, Pauline, for comfort. Big mistake, Sally. Instead, Pauline gave her half a Seconal and told her Speck killed all those innocent nurses “because he hates his mother” and their short uniforms were “stirring his desires.” Oh and did I mention she said all this while holding a foot-long knife she referred to as her “burglar alarm”? It’s no wonder Sally decided to sleep under the couch for the night. 6. The time she caught Don in the act with the neighbor lady. Betty has taken a lot of heat for her lack of parenting skills, but the fact is Don ain’t much better -- and is in many ways worse. Take the time Sally walked in on him having sex with Sylvia Rosen, his neighbor and mistress. It’s no wonder she fled to Miss Porter’s soon after. 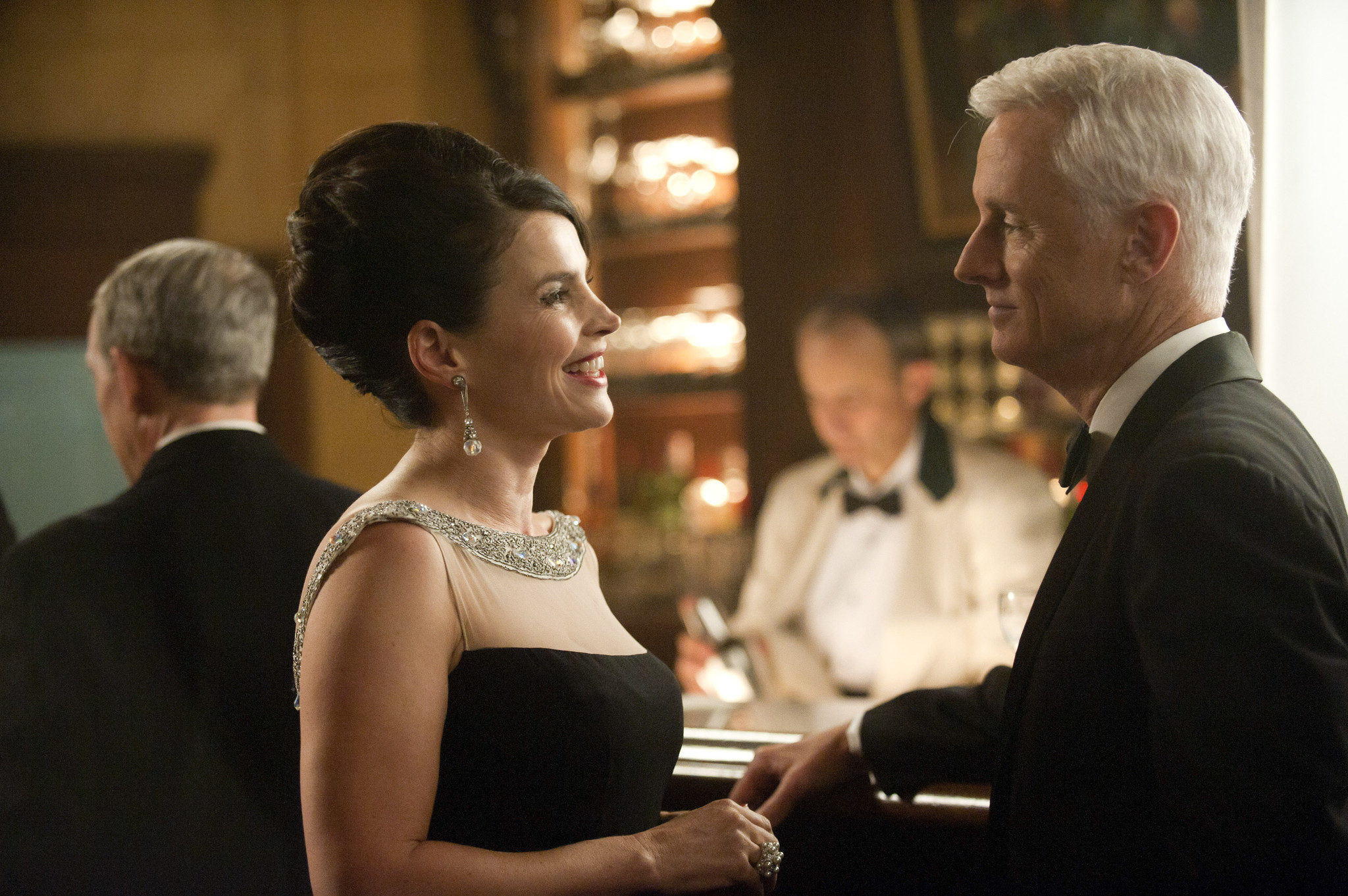 7. The time she caught her other step-grandmother, Marie, in the act with Roger Sterling. Sally’s parents aren’t the only ones responsible for exposing her to inappropriate situations. There was also that time when Roger brought her as his “date” to the American Cancer Society benefit and was charming and adorable -- that is until he got caught in a compromising position with Megan’s (married) mother Marie in a dark corner of the hotel. (Seriously, what’s with the step-grandmas on this show?) Back at Don and Megan’s apartment, Sally called up her confidant Glen and complained to him about Manhattan being “dirty.” Gee, I can’t imagine why. 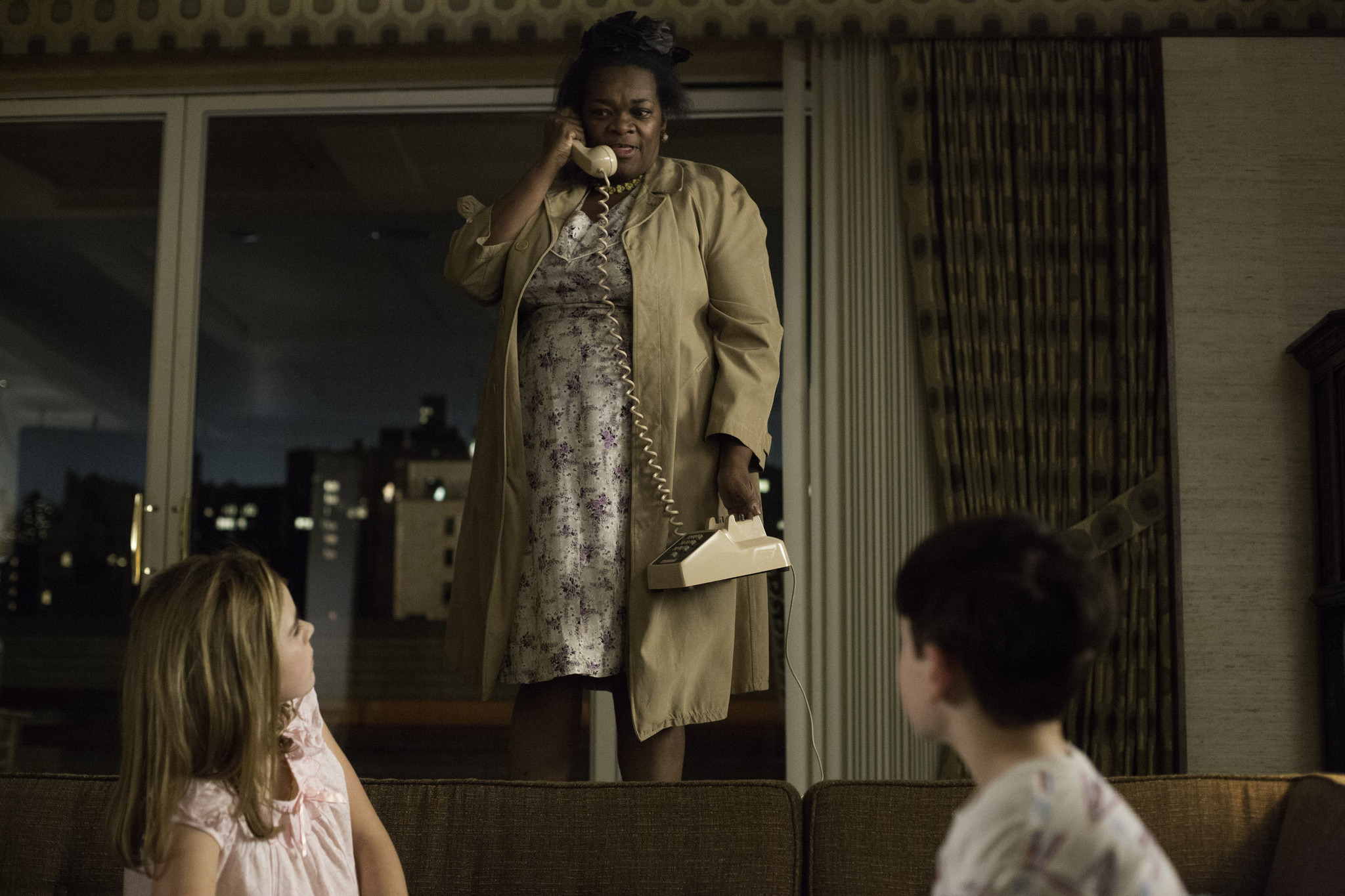 8. The time “Grandma Ida” came to visit. In keeping with the Creepy Grandma theme is “Grandma Ida,” a burglar who busted into Don and Megan’s apartment while Sally was babysitting her little brothers (Megan was at the theater; Don was on a speed bender at the office) claiming to have taken care of Don as a little kid. Sally eventually figured out the truth and called the police, but the incident was an eye-opener for Sally. “I realized I don’t know anything about you,” she later told Don. 9. The time her dad told her about his real identity. After a season-long downward spiral (see Nos. 6 and 8 above), Don redeemed himself by fessing up to his kids -- including Sally, freshly suspended from Miss Porter’s for buying beer with a fake ID -- about his humble origins. “This is where I grew up,” told them in front of his rundown childhood home. The confession probably came as a relief to Sally, who’d recently learned via Betty that her father once had another wife named Anna and whose run-in with Grandma Ida had piqued her curiosity about her father’s obscure past. We don’t know the full extent of Don’s confession -- did he have the courage to tell her about the whole trading-identities-with-a-dead-guy thing? or about his terrible bowl cut? -- but the incident no doubt left an impression. 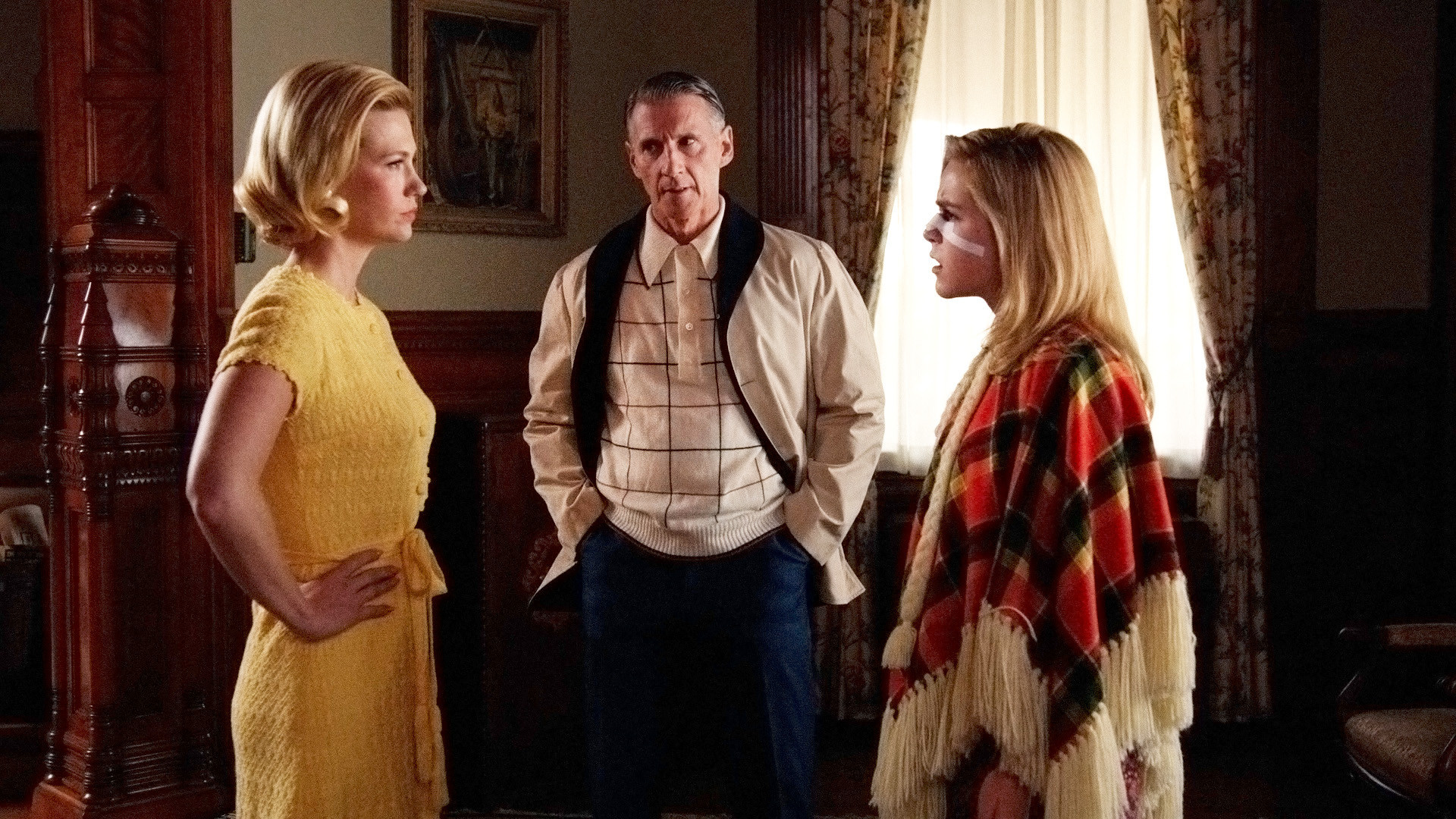 10. The time she broke her nose “sword-fighting with golf clubs.” Betty, as per the usual, was mostly concerned about the superficial. “It was a perfect nose, and I gave it to you,” she said. Sally replied with the perfect zinger: “It’s a nose job, not an abortion.”

Show Tracker is taking a daily look at all things “Mad Men” as the groundbreaking show is set to begin airing its final seven episodes April 5.