BlacklistLA is a running group that runs for the love of L.A. street art -- and L.A.

Around 11 one Monday night, as a couple hundred of us ran down the Venice boardwalk, a guy who was hanging out yelled, “Why are you all running?”

Runners — aren’t they the early risers who log five miles before they go to work in the morning? Follow #blacklistLA on Instagram, and you’ll see that runners also meet at 10 p.m. on Mondays. They run, yes, and the run takes them to a new piece of street art each week. “The art of running for the love of Los Angeles” is their motto.

Driving to Westminster Elementary School to meet the group on the last Monday night of July (meeting spots shift monthly), I feel sleepy to my bones. It’s dark. It’s late. I want to be curled up on the couch with Beanie the dog.

Outside the school, more and more people wander up, talk and stretch on the grass or against the curb until about 10. It’s a diverse bunch by gender, ethnicity and ability. Many runners have phones in holders secured to biceps with Velcro and wear T-shirts from road races.

“I never thought I could love L.A. more than I did — now it’s tenfold,” says Townes, 35, who has been coming on the runs for six months. 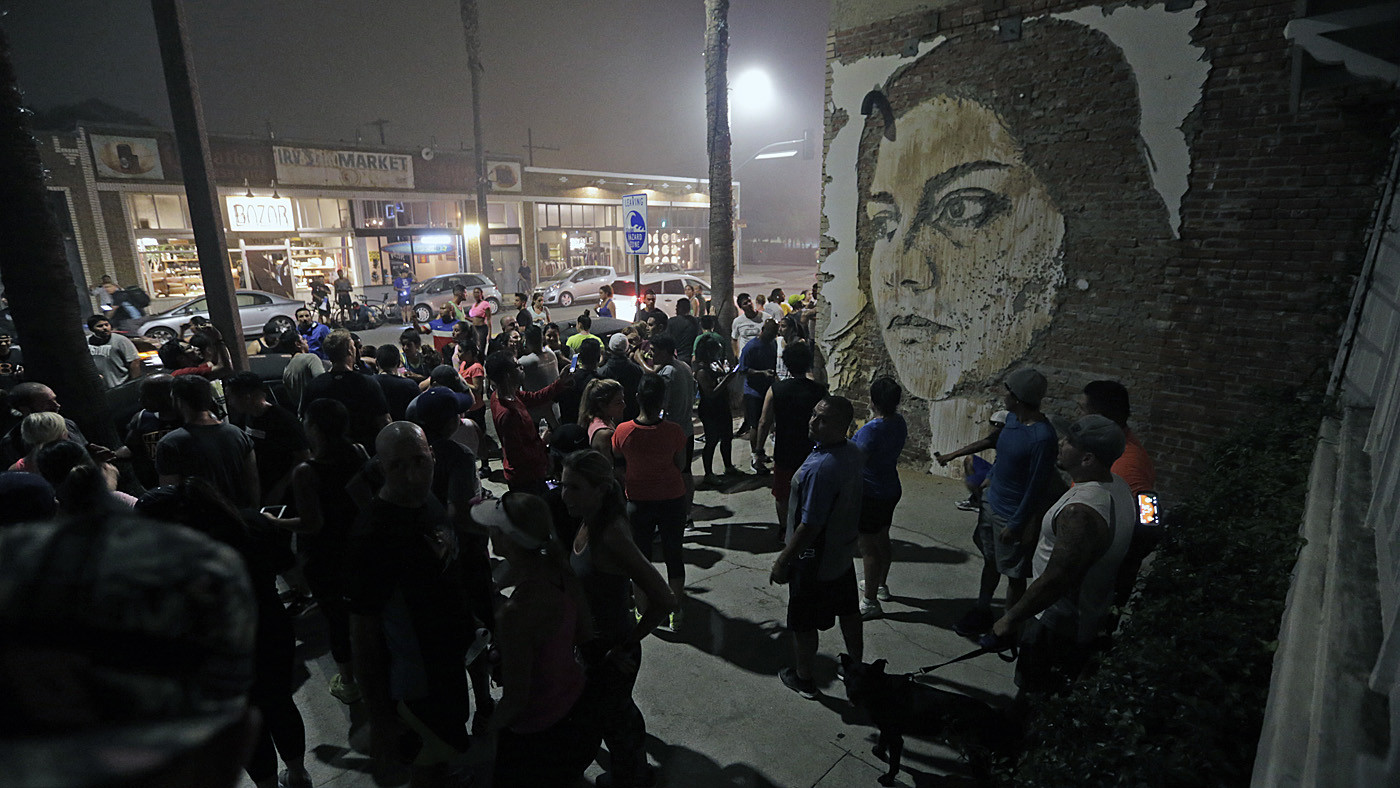 “The art of running for the love of Los Angeles” is their motto. (Lawrence K. Ho / Los Angeles Times)

Nelly Alonso drives up from Orange County every week, after a friend persuaded her to give the runs a try last summer, when the meeting place was Disney Hall. She said she had paid little attention to street art, but now she follows some of the artists on social media. “We’re exploring these neighborhoods at night. It really gives you a different perspective,” said Alonso, 26.

Of course, BlacklistLA skews young. (Who else goes on four-mile runs at 10 p.m.? And who else is on Instagram all the time?) They’re determinedly friendly — a vibe that BlacklistLA founder Erik Valiente wants to be sure is obvious.

“What is one thing you hate when you join a group?” Valiente, 26, asks. “It’s the worry: I’m not cool enough, I’m not fast enough. OK, let’s eliminate that.”

After announcements — including the reminder that it’s a run, not a race — everyone takes off. Volunteers carry flashlights and little speaker pods blasting fast-tempo music. Others are on bicycles, taking care of anyone who falls or needs help. Pacers stop everyone at red lights, and the sidewalks can get crowded.

“Stay safe, on the sidewalk,” someone yells. “Venice and Santa Monica do give tickets.”

Two miles later, everyone arrives at a mural by Tristan Eaton, whose work appears in several U.S. cities, several other countries and museums. It’s not easy to hear Valiente talk about the work, because everyone is jazzed from the run, huffing or talking or laughing. But there will be documentation on Instagram.

Lots of documentation. Maybe half a dozen people bike along the route with cameras, snapping all the time. And at the artwork, everyone closes in for a group photo. Valiente encourages runners to share the experience on Instagram or another social media site. 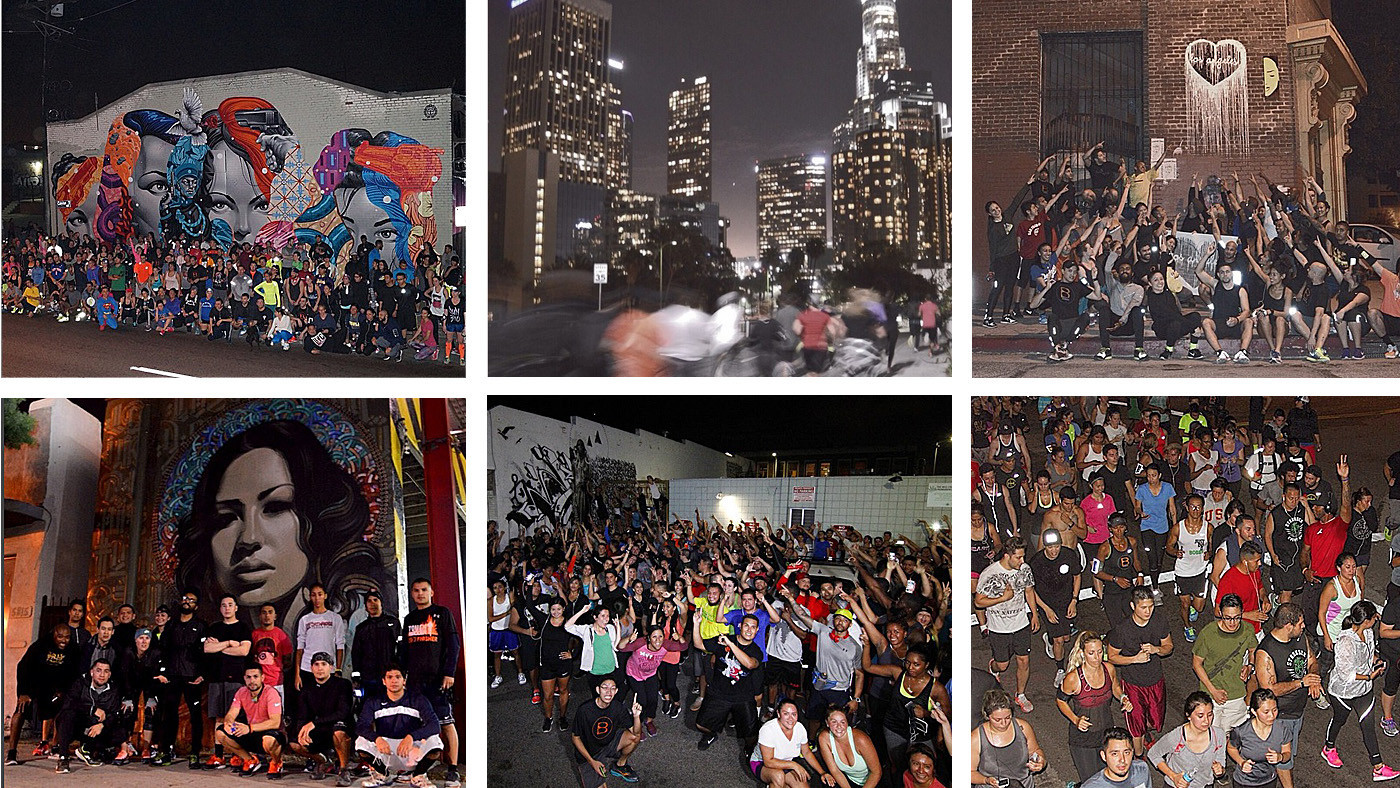 “We’re exploring these neighborhoods at night. It really gives you a different perspective.” (Instagram/BlacklistLA)

We stop at a wall near Pacific Avenue and Market Street in front of a collaborative piece that combines Bisco Smith’s lettering with Afrika 47’s depiction of a Maasai man holding a gun made of beads.

Later by phone, Smith, 35, says he’s thrilled to have all the new eyes on his and others’ work. “From the art side and the health side, it’s amazing.”

“Street art tours are not anything new,” says Eaton, who doesn’t run because of a skateboarding injury. “But what they’re doing is great for the runners themselves. They see the city in a different way.”

“The whole point is to discover the city,” Valiente says. “We want them to come back in daylight.”

Valiente has run the L.A. Marathon nine times; he traces his inspiration back 16 years, when the race passed his home. After finishing at Cal State Northridge, “there was a part of me that said, ‘Head East.’ But I love L.A. Why don’t I just make it here? L.A.'s home and this is it.”

At the moment BlacklistLA, which turns 2 on Sept. 15, is how he hopes to make it. It’s his full-time — unpaid, for now — venture, he says. 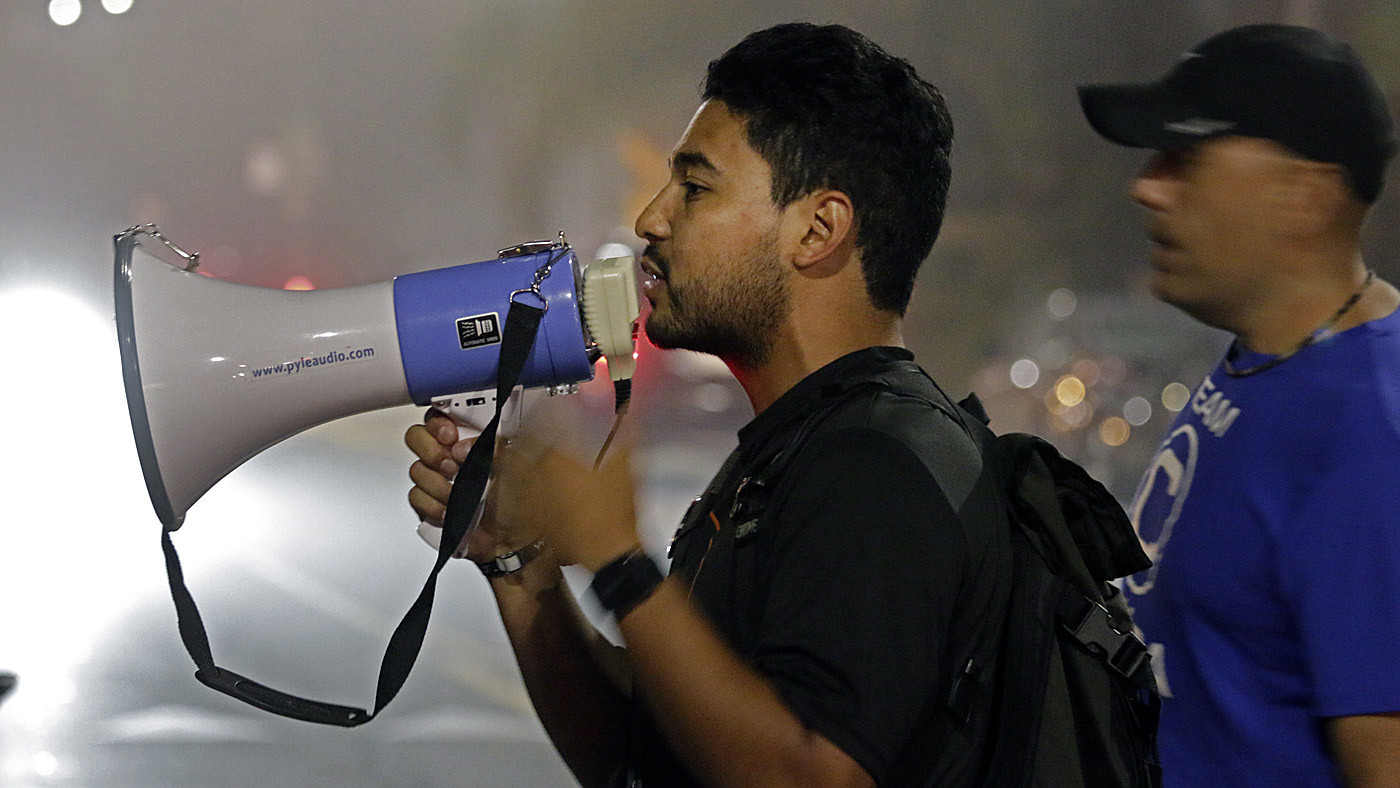 This L.A. booster doesn’t own a car, and he was bicycling when the idea hit to combine running and the discovery of street art into a happening; it’s grown from 10 people to upward of 300. BlacklistLA refers both to the underground, vaguely naughty nature of the late-night runs and to the notion that the artists — making what was then called graffiti — were frequently kept out of galleries.

Valiente loves the stories he hears from the runners — the Venice High graduate who had never been on the nearby canal streets, the people who’d never run before and now are working toward a marathon, the participant who realized his barista was his pacer one night and the woman who was afraid to run in East L.A. — until she went with so many other runners.

As runners return to the school, those ahead of them cheer and offer high-fives before everyone takes off.

“I think it’s amazing. I can see it really catching on,” and there are more than 500 possible destinations, Eaton said. “They could run all day and night for a month and not see them all.”

BlacklistLA plans to sponsor its first race, a 5K (3.1 miles), to mark the 234th birthday of Los Angeles, on Friday. Dubbed HBD LA 5K, the race is to start on the plaza at Olvera Street and continue along a route traveled by one of the founders of the city in 1781, says organizer Erik Valiente.

If you want to join the regular Monday night runs, check the #blacklistla Instagram feed for information about where to meet. The location changes each month. July was Venice, August was downtown. The runs start at 10 p.m. There’s no fee.

Getting out for a Southern California experience

Mary MacVean is the former Mind & Body editor at the Los Angeles Times. She’s a runner and a cook, and has worked at The Times as morning assignment editor, web liaison, food writer and copy editor. She was a national editor and writer focusing on food at the Associated Press and a features editor and a columnist in Moscow, where she also ran a children’s cooking school. She left The Times in 2015.