For stroke survivors, the 10-day boot camp at Chapman University is a chance to strengthen not just mind and body but communal bonds.

For stroke survivors, the boot camp at Chapman University is a chance to strengthen mind, body and communal bonds. 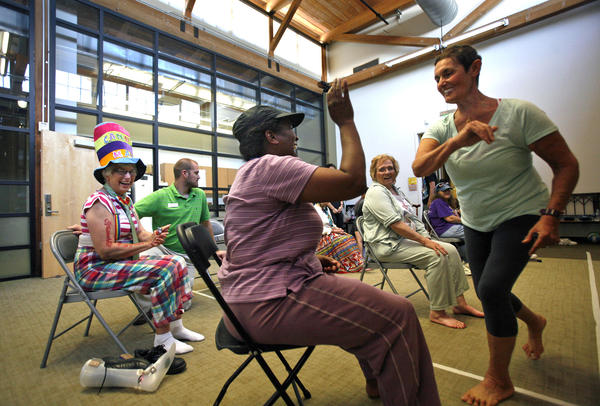 For stroke survivors, the 10-day boot camp is a chance to strengthen not just mind and body but communal bonds.

t Alison McKenzie's summer camp, her counselors organize all the usual activities: arts and crafts, dance lessons, Olympics-style competitions. Like at any summer camp, people blossom, lose their fears, find strength they didn't know they had and make new friends.

McKenzie's campers are stroke survivors. Some are in wheelchairs, some can move well but struggle to speak clearly, most are somewhere in between. The youngest is still in his 30s.

As rehab costs soar and outpatient services dwindle, the 10-day Stroke Boot Camp at Chapman University is McKenzie's solution on a shoestring.

Forget sailboats and tennis courts. There are horses — but they're made from swimming pool noodles and yarn, used for a walking exercise on Western Day. For Around the World Day, the Great Wall of China is a bunch of gym mats and hurdles about a foot off the floor. On Winter Wonderland Day, there's a pile of yarn "snowballs" ready for a fight.

Most of the supplies are cobbled together from found items and 99 Cent store bargains. Campers bring their lunches.

McKenzie and her colleagues think that the camp's intensive, interdisciplinary therapy, combined with camaraderie and plenty of silliness, will make a difference in the lives of people who often face lifelong disabilities, isolation and even a second stroke.

"There are a lot of people out there who are not engaged with the world," she says, "people who could benefit from intervention and are not getting it."

Mike Nojavan was 34 at the start of Memorial Day weekend in 2011. He had done smog checks on 20 cars when he noticed his speech was slurring.

It was a hemorrhagic stroke, which occurs when a blood vessel bursts in the brain. He spent six weeks in the hospital, and then moved back home with his parents. 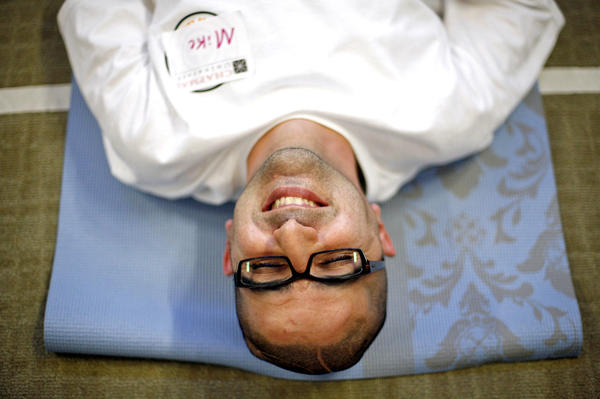 Mike Nojavan, who was 34 when he suffered a hemorrhagic stroke in 2011, relaxes at the end of a yoga class at Chapman University's Stroke Boot Camp. More photos

To him it was no mystery; he worked way too hard, smoked way too much and weighed 40 pounds more than he does now.

"I never went through that pity party stuff," Nojavan says now. But who would blame him if he had? After his stroke he couldn't move his left side, couldn't even swallow.

His friend, business partner and chief cheerleader, Amy Sharif, says doctors held out little hope. "They told me take him home and read to him. That's it."

But Nojavan and Sharif had other plans.

"The life I had before my stroke? I knew I couldn't get that life back. So I decided to get a life I could have," he says.

He's had three brain surgeries since. And he feels like he got a second chance: "You can mess up your whole life, and as soon as you decide to change, you can," he says.

I knew I couldn't get that life back. So I decided to get a life I could have."

Nojavan walks with a slight limp now, but he works and works out several times a week. When he watches TV, he's also working his hand to get his fingers to move on command, or stretching his leg. He's seen every YouTube video he could find about stroke recovery. He's repurposed yard sticks and swimming paddles for rehab tools.

Yoshikane has Nojavan place his hands on the arms of a chair, bend slightly from the waist, shift his weight forward, and stretch one hand out as far as possible. It takes sweat, strength and balance.

Nojavan purses his lips as he exhales, and his brows furrow with the effort.

"It's tiring when you're using every muscle — your brain too," he says.

Nearly 800,000 people in the U.S. have a stroke every year, and stroke kills almost 130,000 Americans annually, according to the Centers for Disease Control and Prevention.

It's a leading cause of disability among U.S. adults, and strokes among people 55 and younger is growing, likely because of obesity, diabetes and tobacco; 19% of strokes are now in that age group, according to the Journal of the American Medical Assn.

This all frustrates McKenzie, a professor of physical therapy at Chapman. 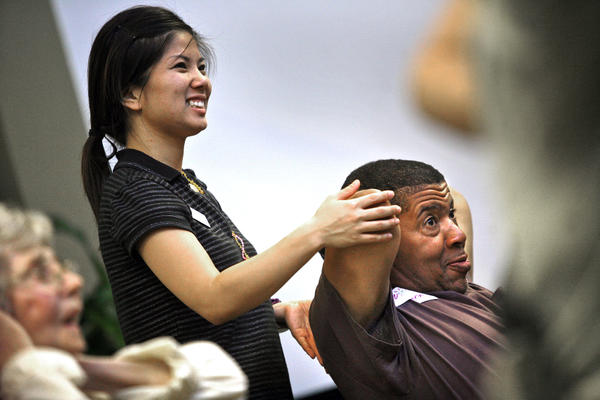 Stroke Boot Camp is free and open to people whose strokes occurred more than six months earlier. Returning campers are given priority, so progress can be tracked over time. Unfortunately, only about 25 campers can be accommodated, McKenzie says.

Camp, in its third summer, is held in a few cluttered rooms in a Chapman building near downtown Orange.

The first and last days are largely assessments, aided by therapists from Steven Cramer's lab at UC Irvine, which has long collaborated with Chapman. How fast can you walk? Can you stand, feet together and eyes closed, for 30 seconds? How far out can you reach your arm? Can you pick up a dime? How many little wooden blocks can you move from one box to another in a minute, using your stroke-affected arm?

And for each measure, was it better at the end of camp than at the start? Better this year than last? One man moved 73 blocks this year, 67 last. Nojavan shaved nine seconds from his walking pace over 10 yards.

Yoshikane, 24, says he always planned to work with athletes until Stroke Boot Camp. He has been impressed with the "small victories" of the campers, how they're still improving 10 years after a stroke:

"This is really an unexpected experience."

Polina Pustylnik, soon to be a great-grandmother, is short and compact, with a cap of honey-blond hair and frosted pink manicured nails.

I am so exhausted and so happy."

She dresses for each day's theme: navy and white bandanna for Western Day, a Russian shawl and pink cheeks, like a nesting matryoshka doll, for Around the World Day. Sometimes she uses a cane.

With her right hand, Pustylnik uncurls the fingers of her left, forcing them around a chair arm. They don't move just because she wills it. Yet.

In English that is perfect but still accented 40 years after she left Odessa, Pustylnik speaks to her left arm — "I'm thinking of you" — as she tries to get it to obey. Later, she squats and tries to shift from foot to foot, like a basketball guard.

"Make it work, turn on that muscle," Yoshikane encourages. "Look at your knee."

As she leaves for home, Pustylnik says, "I am so exhausted and so happy." 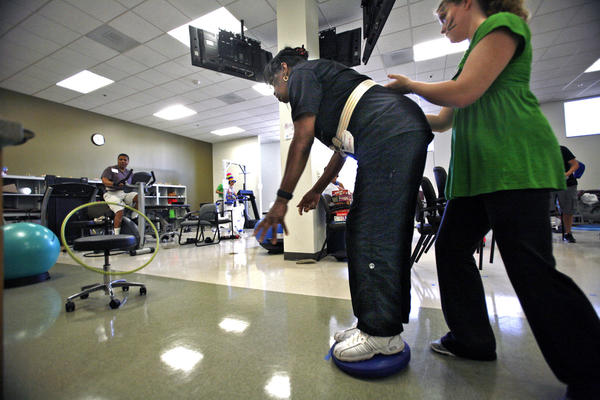 Chapman University student Cindy Mack, right, helps Janet Johnson keep her balance during boot camp. "You feel triumphant when you come here. You feel you made it. You're thriving," says Johnson. More photos

"You feel triumphant when you come here. You feel you made it. You're thriving," says Janet Johnson, who since her 2009 stroke has worked on NASA projects.

"It's the one place where you are not judged, where you don't have to wonder, 'Can you tell I am damaged goods?' Everyone here applauds you," Johnson, 58, says.

Campers even indulge in stroke jokes.

On Western Day, when campers are loading and shooting a foam gun — with at best modest success — someone says: "The safest place to be is in front of the target."

Jeanne Schabarum makes a joke to get through a bothersome activity: building gingerbread houses with graham crackers, jelly beans, Skittles and pink and white frosting.

She's 81, worked for 38 years selling insurance and has worked like crazy, she says, to recover from the stroke she had seven years ago. But she's no house builder. She piles a few flat graham crackers with icing and M&Ms in a heap. She gets a marker and writes, "After the Earthquake."

On the last day of camp, paper graduation decorations left over from another event hang everywhere. Perhaps for the first time all week, everyone is sitting as McKenzie hands out certificates. 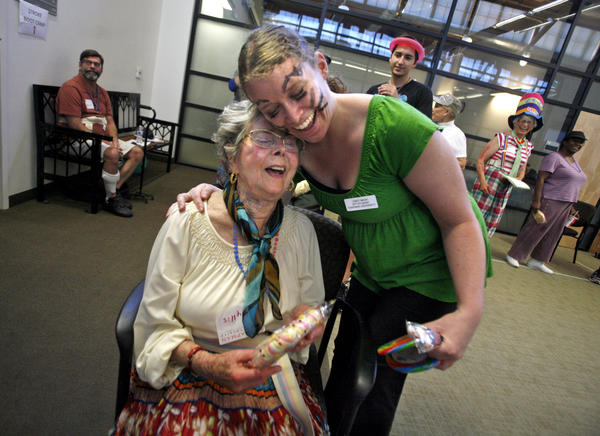 But even at graduation, young stroke survivor Nojavan is working, exercising his hand. "See you at the gym, my friend," he tells a fellow camper.

A few days earlier, Nojavan had shown up without his thick, black hair — his "summer cut." His shaved head tracks his ordeal: A scar in a C-shape goes from one ear to the top of his head, and there's a bulge where a stent was inserted on the other side.

His friend Sharif says he is a much better person than he was before his stroke. "He's more patient, more relaxed, more compassionate," she says. Nojavan, who has started wearing a St. Christopher medal around his neck, does not disagree.

But he's still driven. He'd like to run — or at least walk — a marathon one day.

Finding his family's place in history 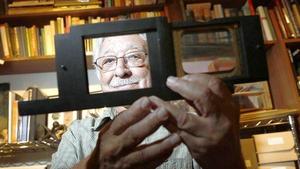 Historians have ignored my family's role. I want to correct that." 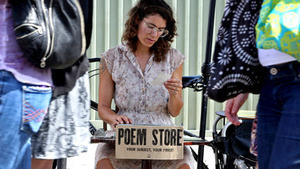 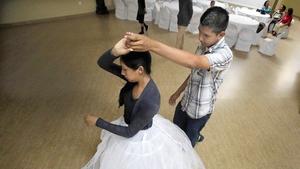 She grows up and becomes a princess and the prince comes along and it's like a happy ending to a fairy tale."

Mary MacVean is the former Mind & Body editor at the Los Angeles Times. She’s a runner and a cook, and has worked at The Times as morning assignment editor, web liaison, food writer and copy editor. She was a national editor and writer focusing on food at the Associated Press and a features editor and a columnist in Moscow, where she also ran a children’s cooking school. She left The Times in 2015.