Timeline: Gloria Allred’s high-profile cases and clients over the decades

Gloria Allred, whose website touts her as the most famous woman attorney practicing law in the nation, is the face of a firm known for filing high-profile discrimination and sexual abuse lawsuits. The media-savvy Allred has also worked as an advocate or a publicist for people who find themselves embroiled in scandal. Here’s a look at some of the more memorable cases and clients of the attorney’s four-decade career.

Seven children and their parents filed a lawsuit that ended the chain’s gender-specific toy aisles.

Allred publicly handed a chastity belt to California State Sen. John Schmitz, who proposed banning abortion. He responded by calling her a "slick butch lawyeress." She sued for libel and won $20,000 and an apology.

Rita Milla claimed that seven priests had sex with her as a teenager and sent her abroad to give birth. After more than two decades, she received a settlement and was granted a paternity test that proved one of the priests was the father of her daughter.

Allred’s personal desire to join the club led to a discrimination suit that ended its males-only policy.

Known only as Jane Doe, Norma McCorvey saw her anonymity lifted as Allred guided her into the national dialogue on abortion.

Eleven-year-old Katrina Yeaw was unsuccessful in her campaign to become a Scout when the California Supreme Court ruled that the organization was not a business and couldn’t be sued for discrimination.

Left, Allred with photograph of Nicole Brown Simpson clipped to her dress in 1994. Right, in 1996, Allred holds up a vial of blood while protesting near the Simpson estate. The vial represents evidence police found of O.J. Simpson's blood at the crime scene. (Francis Gardler / Los Angeles Times; Michael Caulfield / AP) 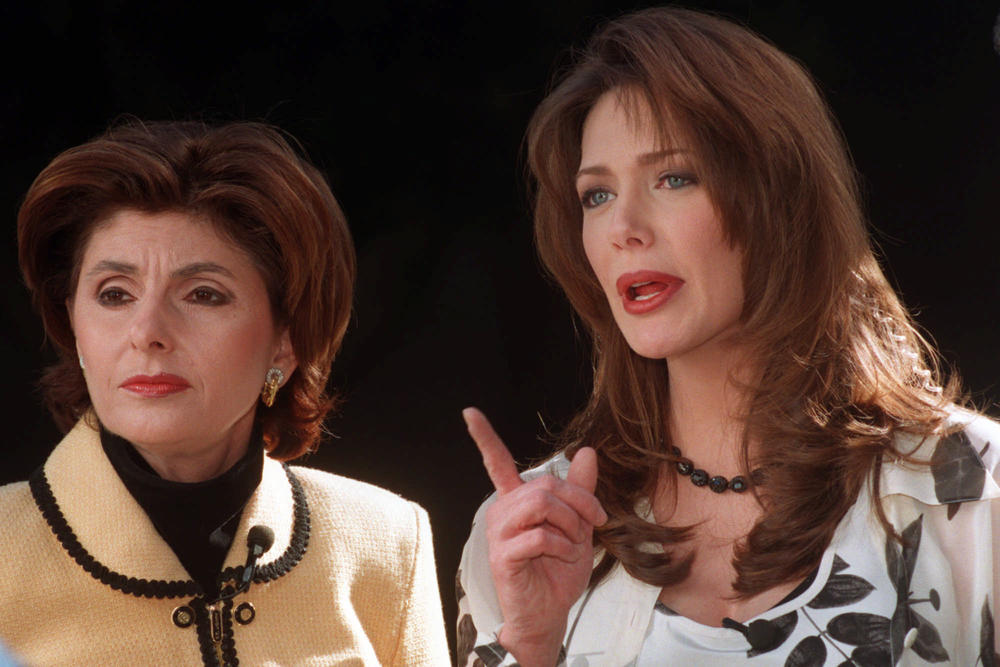 Actress Hunter Tylo, right, speaks outside the Los Angeles County Courthouse after a jury awarded Tylo nearly $5 million on Dec. 22, 1997, for being fired from her role as a seductress on "Melrose Place" because she became pregnant. (Nick Ut / AP)

The actress was awarded nearly $5 million after being fired from "Melrose Place" for being pregnant.

Model Kelly Fisher sued fiance Dodi Fayed for breach of contract after learning he was seeing Princess Diana. When the princess and Fayed were killed that year in a car crash, Fisher dropped the suit.

P.J. Masten testified that the sports broadcaster had bitten and sexually harassed her. Charged with sodomy and assault, Albert ended up taking a plea deal before his criminal trial ended. 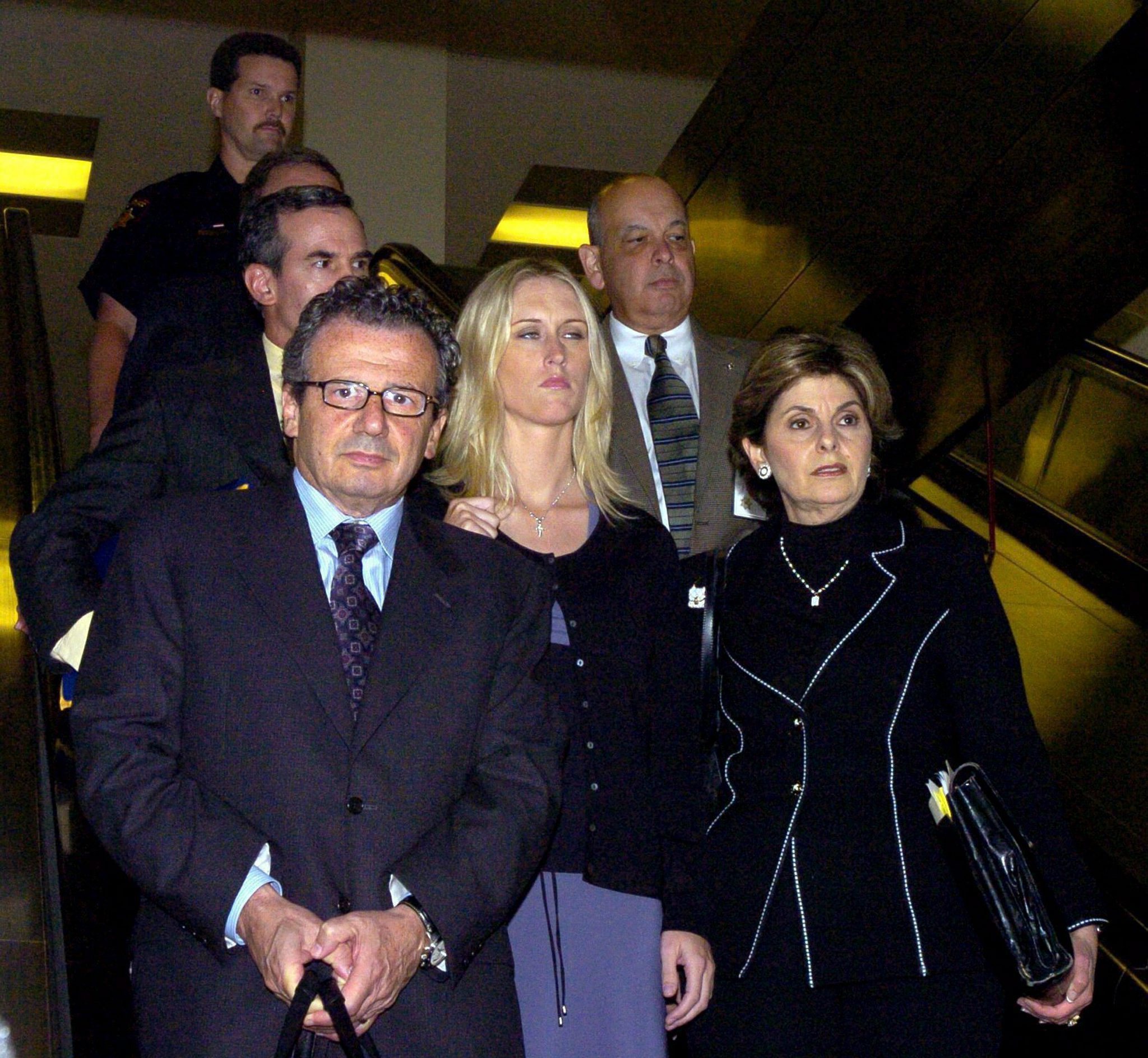 Allred acted as publicist and advocate for the girlfriend of Scott Peterson. Frey testified for the prosecution and Peterson was eventually convicted of murdering his pregnant wife. 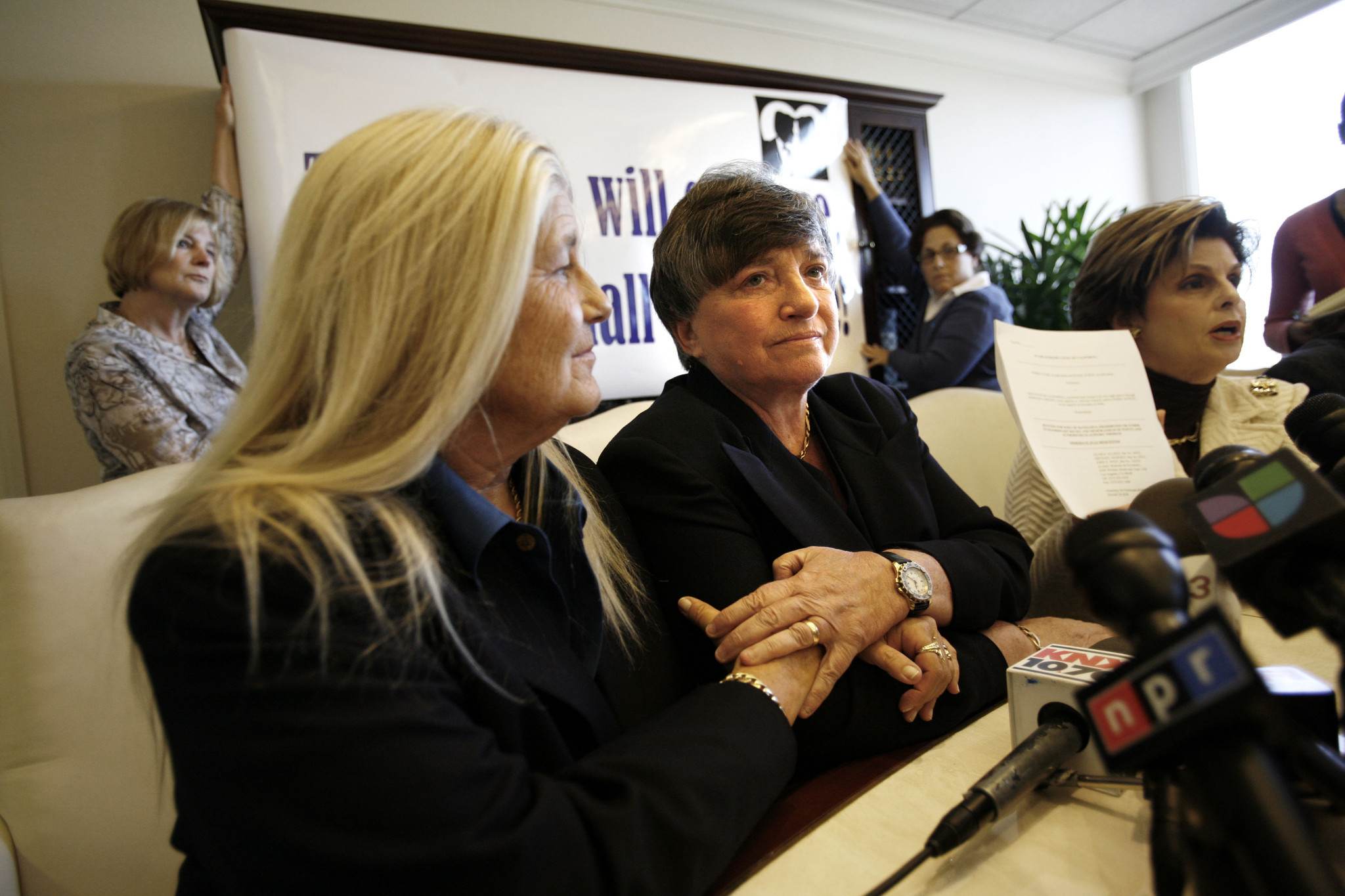 Diane Olson and her spouse, Robin Tyler, pictured with Allred as she announces a new lawsuit against Proposition 8. The couple were married June 16, 2008, after Allred represented them in their victory before the California Supreme Court. (Barbara Davidson / Los Angeles Times)

Two couples filed the first lawsuit that would end up challenging the state’s prohibition of same-sex marriage. 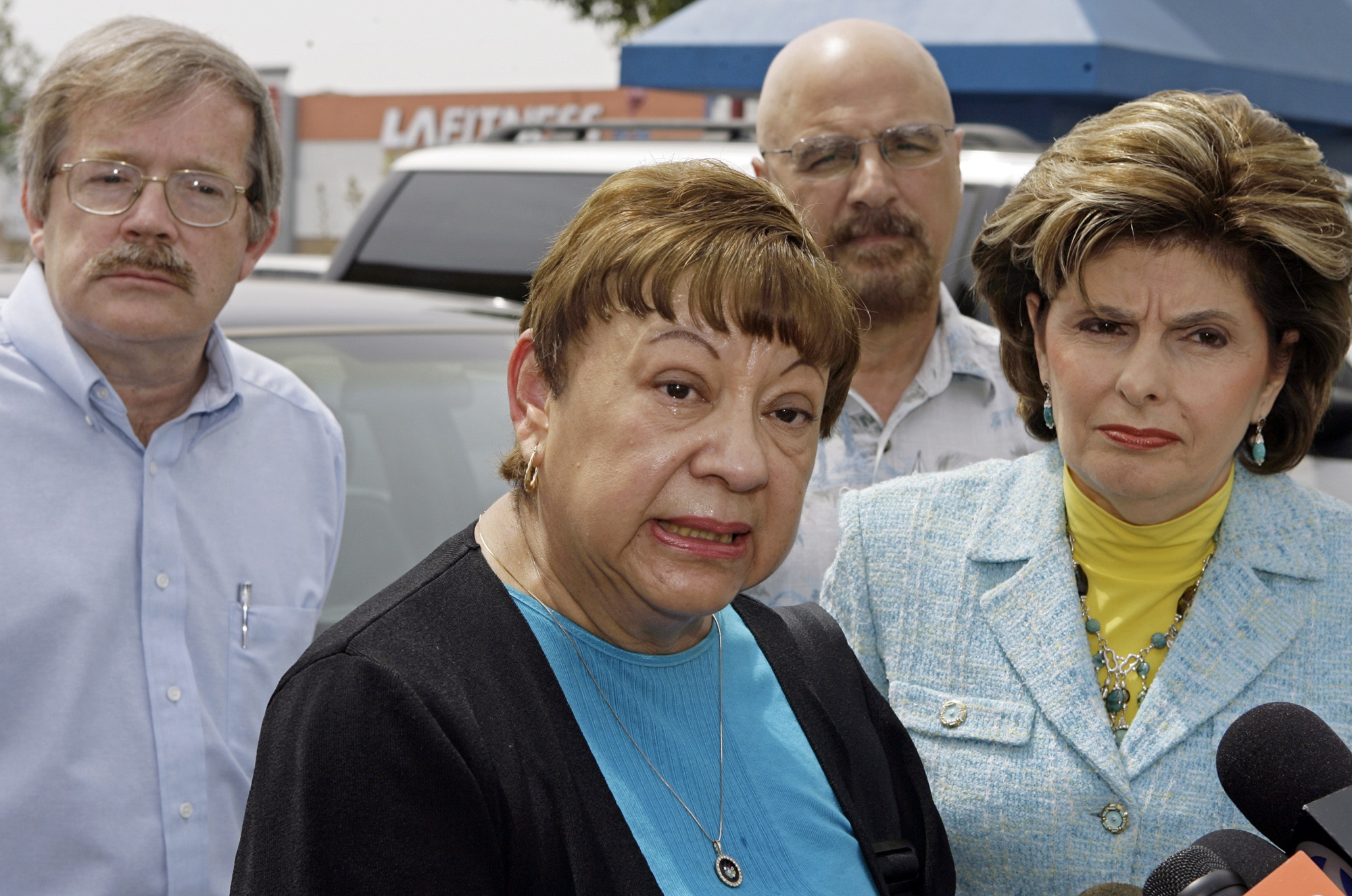 Eloise Garcia, 66, center, a former employee of Circuit City, cries as she recounts the day she was laid off after what she said was 17 1/2 years of employment. Allred represented 217 ex-employees who sued the retailer alleging age discrimination. (Damian Dovarganes / AP)

More than 200 fired employees who claimed they were targeted because they were older and earned higher wages received a $15 million settlement. 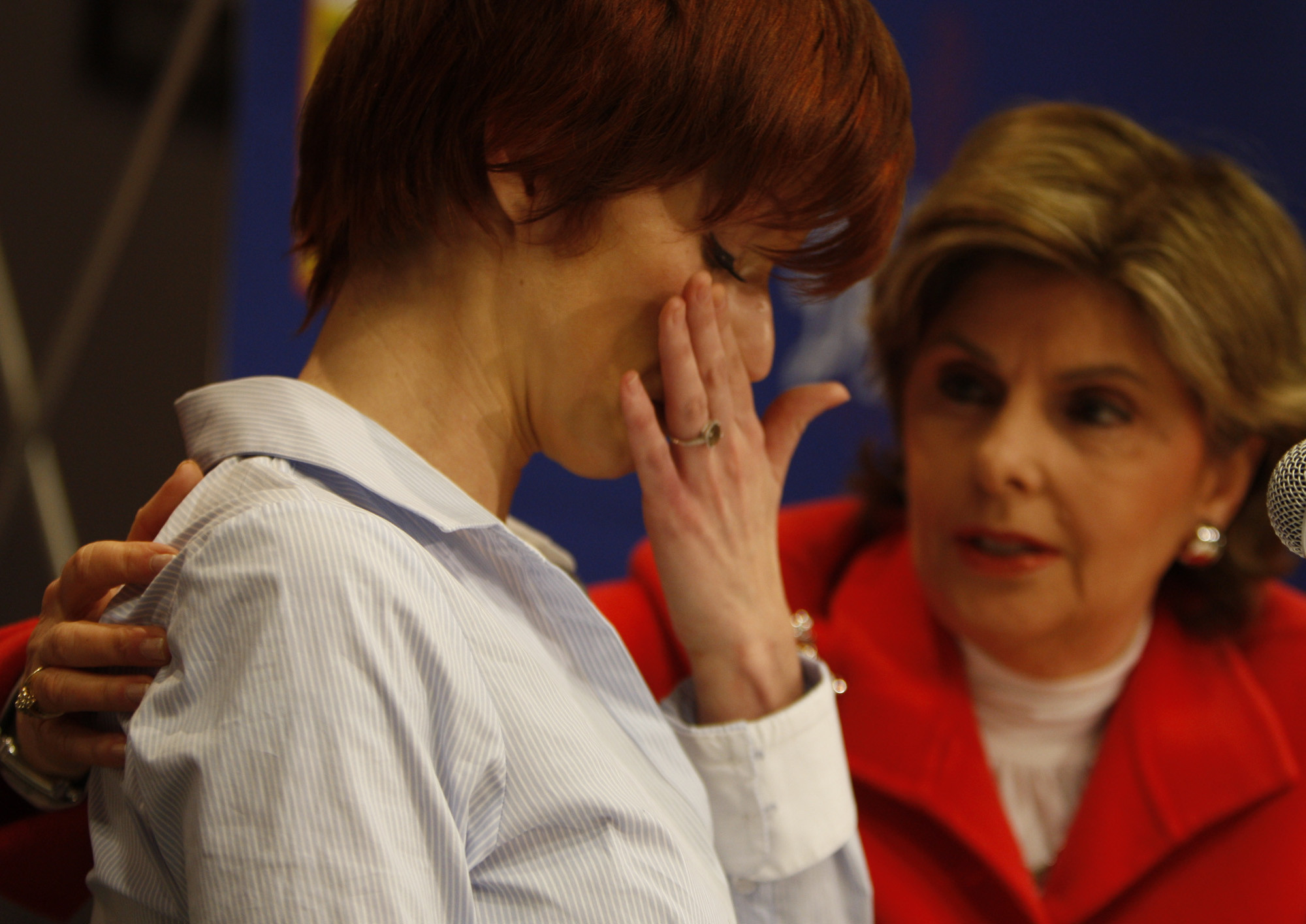 Veronica Siwik-Daniels, who said she had a romantic relationship with the golfer, requested an apology from Woods. A press conference that Allred had scheduled for Rachel Uchitel, another of the golfer's alleged mistresses, was canceled hours beforehand when Uchitel and Woods reached a confidential settlement.

Nicandra Diaz Santillan was awarded back wages after she said she was coldly dismissed from her housekeeping job for being undocumented by the one-time gubernatorial candidate.

FROM THE ARCHIVES: Gloria Allred is the lawyer everyone loves to hate 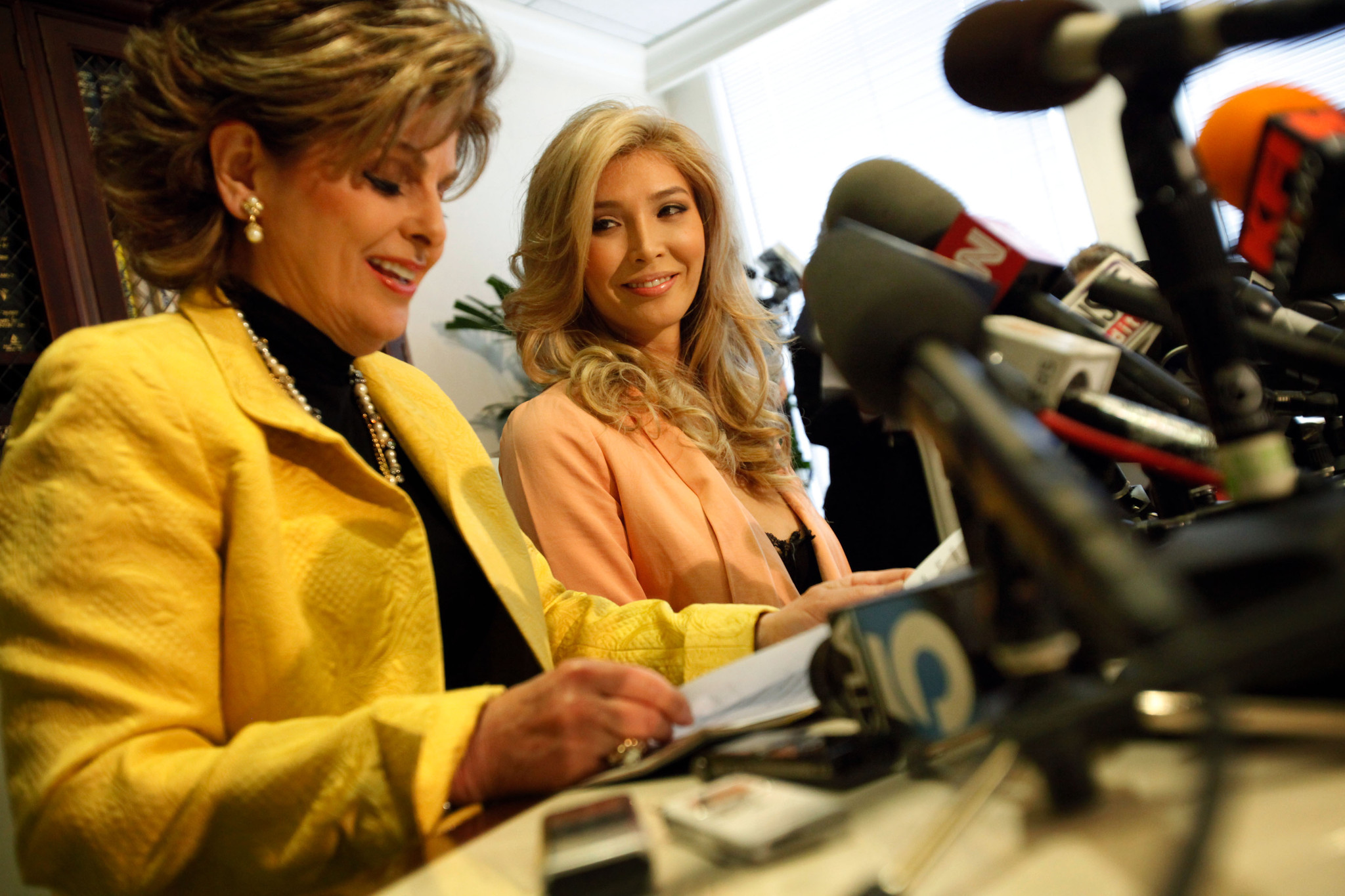 Jenna Talackova, right, who advanced to the finals of the Miss Canada pageant before she was forced out because she was not “a naturally-born female,”, in 2012. (Barbara Davidson / Los Angeles Times)

At first disqualified from the Miss Universe Canada pageant for being a transgender woman, she won the right to compete and made it to the final 12. 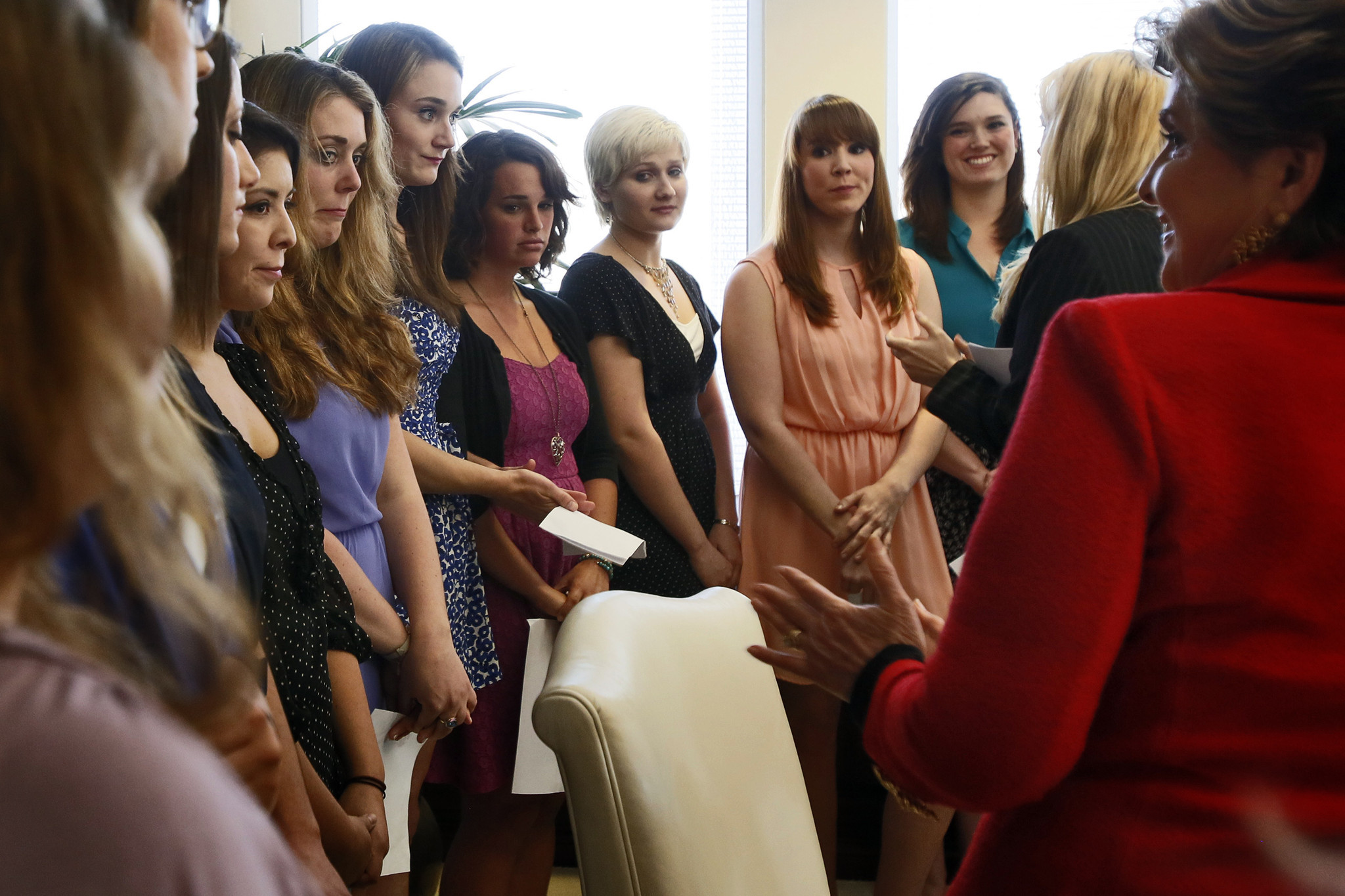 At least 10 current and former students received confidential settlements after filing a federal complaint accusing the school of mishandling allegations of sexual assault.

Richard Winton is an investigative crime writer for the Los Angeles Times and part of the team that won the Pulitzer Prize for public service in 2011. Known as @lacrimes on Twitter, during 25 years at The Times he also has been part of the breaking news staff that won Pulitzers in 1998, 2004 and 2016.