Germany’s commitment to higher education is so strong that even Americans can get a free college degree in the country.

In Germany, students do have to pay some registration fees each semester — they vary from campus to campus, but usually average about 250 euros (about $273 according to current conversion rates), said Nina Lemmens, the North America director for the German Academic Exchange Service. That’s less than $600 each year, a paltry fee compared to CSU’s $5,472 annual fees.

Here’s why Germany can offer free tuition, while California continues to struggle:

The public wants it

The narrative of success in the U.S. has traditionally been an individual one, the capitalist mentality that gives people the agency to determine their successes and futures. That same view has infiltrated how policymakers perceive education, said Cecilia Rios-Aguilar, director of UCLA’s Higher Education Research Institute.

“The mentality of some policy makers is that people can make it on their own,” Rios-Aguilar said. “They don’t need help.”

In Germany, on the other hand, Lemmens said, there’s “a very strong social agreement that this is free.”

It’s not as though German politicians haven’t tried to extract more money from students. In 2005, the country’s high court reversed a law that banned tuition, allowing states to decide whether to charge students. Over the following few years, 10 states instituted tuition fees of around 500 Euros per semester.

“It’s a joke compared to the United States,” Lemmens said.

Still, students protested the fees, and voters held the view that education is a public good. By the end of last year, every German state that introduced tuition had reversed its decision.

Just because there isn’t a student-to-university transaction doesn’t mean someone isn’t paying for education. Taxes are much higher in Germany than in the U.S., which allows for more spending on education. 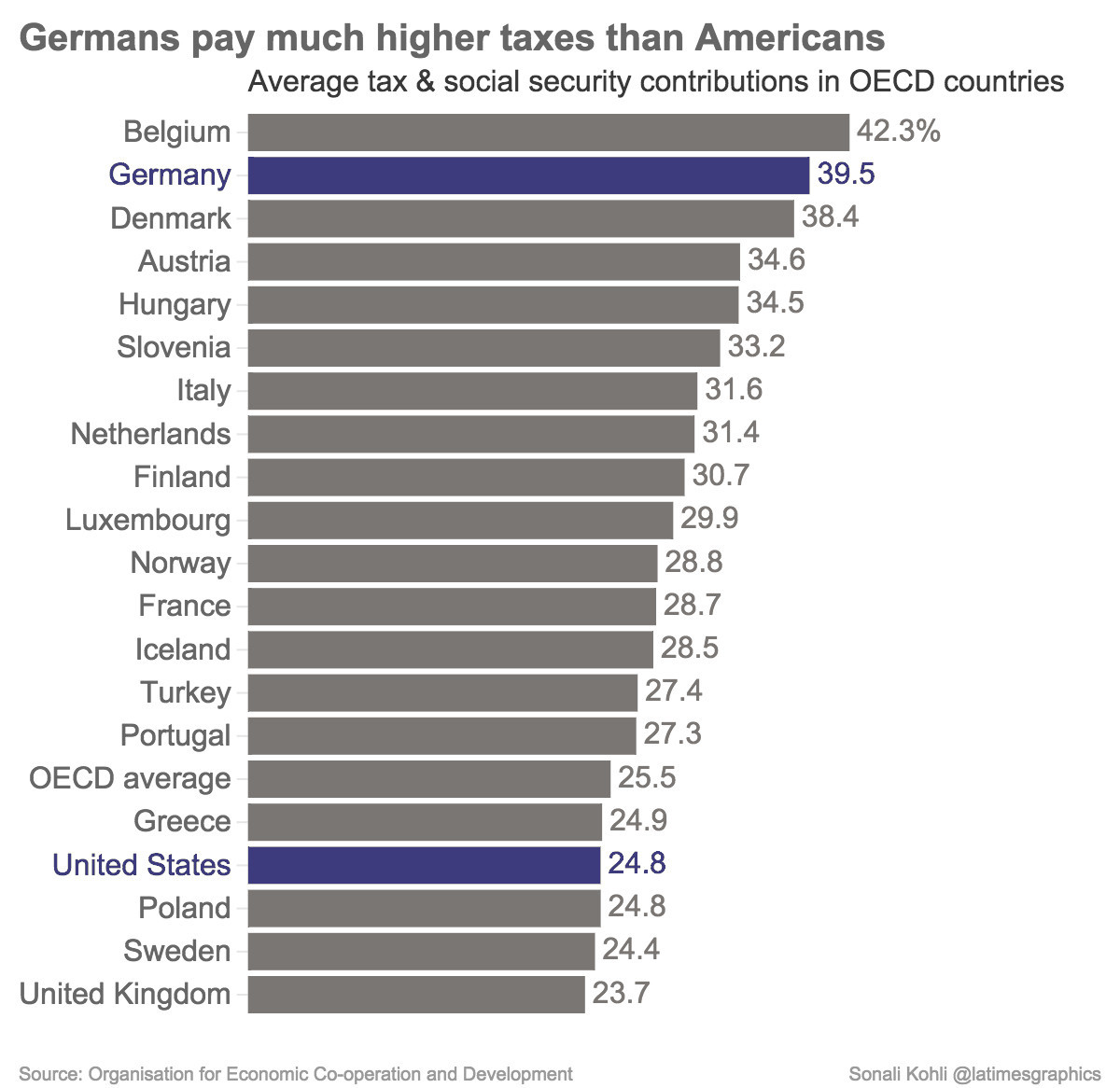 And many German universities don’t have the extravagant amenities that U.S. colleges are using to attract students, as Marketplace has pointed out.

Americans are used to paying for college

There are very few private colleges in Germany, as opposed to the U.S., where more than 60% of colleges were private as of 2011, according to the Department of Education. European universities were first established hundreds of years ago, with the goal of only educating the most elite. That meant that few people were receiving a public education, so governments could foot the bill.

In recent decades, students have led the charge to break down those barriers, to some degree. In May 1968, students in Paris led a movement for education reform. Soon after, students in Germany led a movement to get more control over their schools. This was part of the country’s post-World War II effort to remake itself, to provide equal access and opportunities to everyone.

In the U.S., by comparison, the effort to open access to universities to a larger population is built into the economic structure of universities. Private, not-for-profit institutions were born as the U.S. government acknowledged that it couldn’t handle such a high demand for education. Now, these private schools get some funding from the government but also from tuition and fees and alumni donations.

So even though California tried to make education free for everyone, the efforts were threatened from the start, said Adrianna Kezar, an education professor at USC, because the country was already so deeply entrenched in private colleges. Students and voters are already accustomed to the idea of paying tuition, so it’s less likely for them to revolt successfully here.

College may be free in Germany, but fewer students there are earning college degrees than in the U.S., according to the Organisation for Economic Co-operation and Development. Only 30% of Germans ages 25-34 have completed a tertiary education, which includes academic degrees and some but not all vocational programs. That’s below the OECD average, and below the U.S. 45% attainment rate for the same age group.

Germany is not a country rich in natural resources, but it is population-dense — there are about 80 million people in a country that’s smaller than Montana. The economy’s greatest resource, then, becomes a skilled workforce, Lemmens said.

The country relies on both universities and apprenticeships to produce that workforce, rather than just the U.S. equivalent of theoretical bachelor's degrees.

In Germany, vocational and academic tracks are well-respected, Lemmens said. But Germany’s practice of tracking students into an educational path is controversial around the world because it happens so early, said USC education professor Tatiana Melguizo.

The U.S. and California also recognize the need for a highly skilled workforce, but the difference is that German companies invest more in vocational training, Melguizo said. That investment helps reduce the government’s burden to pay for higher education.