For a piano teacher on Skype, lessons in the key of see

Talc Tolchin, 66, is among the music instructors turning to online lessons. To him, teaching remotely doesn’t change much: ‘When you see someone’s face, you see their doubt or their excitement.’

For a piano teacher on Skype, lessons in the key of see 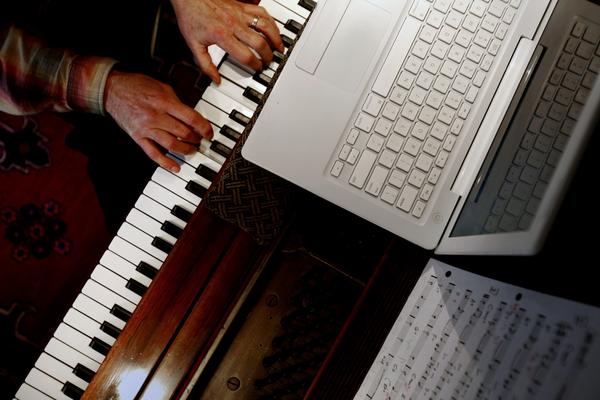 Instructors are turning to Skype and other technology. To Talc Tolchin, teaching remotely doesn't change much: 'When you see someone's face, you see their doubt or their excitement.'

Talc Tolchin ducks into the music studio he built behind his Marin County cottage, where the sun filters through a towering redwood tree and his daughter has dotted the flower beds with fairy houses. It's time for his next piano lesson.

An hour's drive northwest of San Francisco, this woodsy town tucked among rolling golden hills claims only 500 or so dispersed residents. But not all of Tolchin's students are close by. When it's time to greet his second student on a recent Friday, he reaches for the laptop perched on his upright piano and summons her — via Skype.

Madeline Sheron pops up, peering at Tolchin from under her dark bangs. They banter — about an app that offers piano, bass and drum accompaniment, adjusted for groove and tempo. Then they dive into "All of Me," the song Sheron had chosen in hopes of mastering jazz improvisation.

Her computer camera is aimed over her shoulder and Tolchin watches her left hand as it bops from sevenths to thirds. Tolchin has two cameras — one mounted on the ceiling so students can watch his hands, the other trained on his face.

"Go, girl!" he exclaims, tapping his foot as she masters the first turnaround.

Sheron was 200 miles away, in the Sierra Nevada ski town of Truckee. But she could just as well have been across the globe.

This is a music lesson, 2013-style, with tailored software, a growing array of videoconferencing platforms and, for Tolchin, a powerful cable Internet connection that on this day allowed him and Sheron to play their pianos simultaneously — with no delay.

It's not for everyone. The world of music instructors is filled with late technology adopters on such tight budgets that even basic equipment needed to conduct online lessons is a stretch, said Rachel Kramer, director of member development for the Cincinnati-based Music Teachers National Assn.

Then there's tradition. "There will be always be teachers who feel it would never ever work," she said. 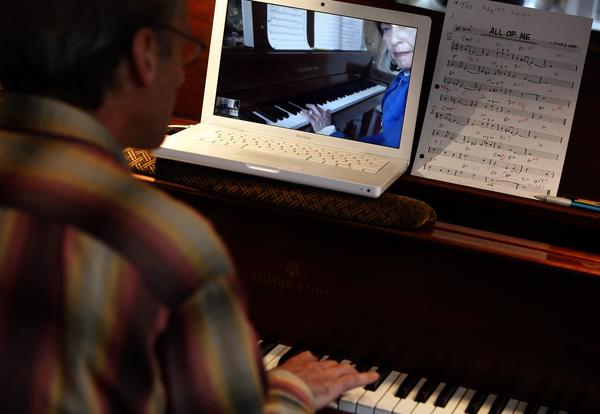 But plenty are plunging in. Kramer rattled off examples: the saxophone teacher who plies his trade at schools during free periods and resorts to online lessons with those students during snow days. The pianist who spends months with her grandchild in California and has managed to hang on to many students remotely.

An accomplished musician, Tolchin began examining new ways of teaching more than a quarter-century ago, when he produced one of the first series of instructional videos on the market. In time, he shifted to DVD, but competition coupled with free YouTube tutorials eventually slowed sales.

Next, the hippie-era New York transplant with wispy gray hair tried phone lessons. It worked for him, "but the students needed to see my fingers." Two years ago, he gussied up his computer setup.

Tolchin, 66, describes himself as "a facilitator, a coach, a trainer, sometimes a parent, sometimes a therapist."

He allows students to choose their music and guides them with intimacy, at their own pace. He promises a mix of "patient disciplining" combined with plenty of acknowledgment and enthusiasm. He loves guiding those with a passion for it into the realm of songwriting.

To him, teaching remotely doesn't change much.

"When you see someone's face, you see their doubt or their excitement," he said. "It's really about the person and the issues they have around performance, being accepted, worrying about being reprimanded. What I really do is develop a relationship." 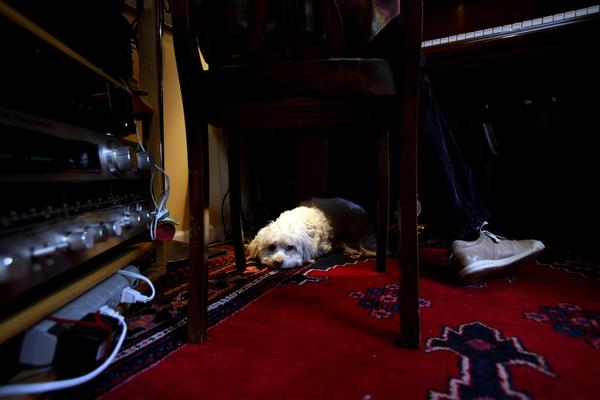 All but one of his online students have been adults. One tuned in from northern Canada, where Tolchin couldn't help asking about frigid weather conditions. His long-term dream: to accrue enough remote students to one day move to Bali and teach from there.

Tolchin charges $50 per lesson, whether students show up in person or on screen. Most of his students come via personal referral, though he has also drawn some interest through his website. Of his 17 current students, however, only three study remotely.

Those who come to him in person generally stay two to six years, he said, while Skype students have stayed two to six months. That makes them less likely to recommend him to other students "because they have little to show for their limited time."

Tolchin suspects that "the ease and convenience of coming to a Skype session has the same ease on the back end of leaving."

There are glitches. His students at times have suffered from weak connections. The latest Skype upgrade didn't work with Tolchin's split-screen software, which allows students to see both camera angles, so he had to revert to the older one. Yet for the most part, technology has served him well.

Evelyn Orman, a professor of music education at Louisiana State University who has researched distance learning, said difficulties such as connection speed and an annoying time lag are diminishing with technological advances. Among the most striking (and mega-pricey): a set of pianos, complete with pedals, separated by geography but connected through software. When the student hits a key, the same key depresses on the teacher's instrument, precisely conveying the student's tone.

Currently, distance lessons generally require that student and teacher each obtain hard copies of the same music. But several companies are competing to devise display software that allows student and teacher to view the same on-screen music. In one version, when the instructor circles a measure, the marking also appears on the student's display.

Orman teamed with Jennifer Whitaker of the University of North Carolina to probe differences between face-to-face and distance lessons for three middle school students learning tuba and saxophone, analyzing nearly 30,000 frames of digital video and getting written comments from teachers and students. 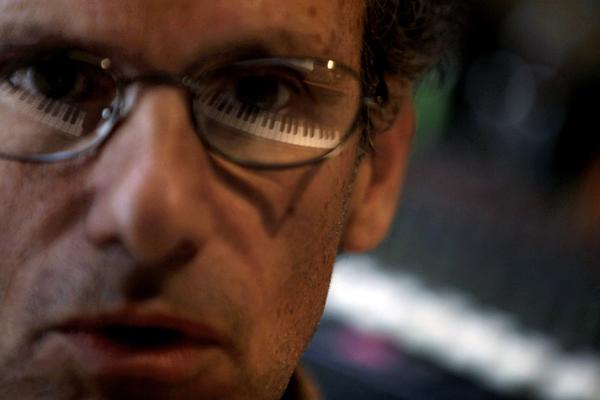 Resistance is understandable, given that the in-person master-apprentice model has a long and storied history.

"That's how Mozart was taught. That's how Bach was taught," said Orman, who with Whitaker is researching virtual-reality instruction methods for conductors.

But advanced students often travel long distances for the right mentor: Orman went all the way to the Conservatoire National de Région de Bordeaux, in France, to study classical saxophone performance. For those unable or unwilling to make such a commitment, cutting out the commute is increasingly being recognized as a worthwhile goal.

Among the converts is New England's Berklee College of Music, whose online offerings include 12-week courses and multi-course certificate programs in bass, piano, guitar, orchestration, theory and more.

"The college of music that started it all has started it all again, online," reads the school's slogan for its distance arm, which has paired its faculty with tens of thousands of students in 90 countries.

For Sheron, blending remote lessons with her visits to Tolchin was a perfect solution.

The 62-year-old singer shuttles between homes in nearby Novato and the Sierra Nevada's Truckee and craved continuity with her music. Her classical piano training left her feeling as though she couldn't just noodle around with music. To overcome that barrier and improvise to her jazz vocals, she turned to Tolchin, who years ago gave lessons to her son, now a professional musician in Portland. 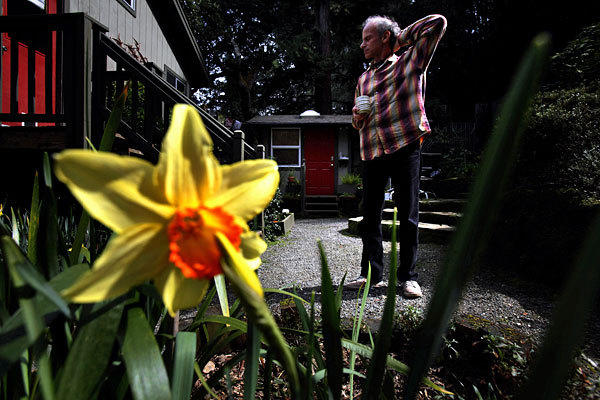 "The main thing that makes it work is that Talc is really intuitive," she said. "He's really personable and he's funny.... I feel like he's there."

On the recent Friday, Tolchin suggests she double the pace and turns on a synthesized drumbeat for her to match. As she moves through the bass chords, he puts his right hand to his keyboard and adds a liquid melody.

"With your left hand being more tight, your right hand will flow a bit more," he shares. Then it's her turn.