In Sheik Wali, another place where leaders have failed to fix what is broken, many humbly accept the fate of their children, killed when train gates didn’t close.

Grief lives in an Egyptian village: In Sheik Wali, another place where leaders have failed to fix what is broken, many humbly accept the fate of their children, killed when train gates didn't close. 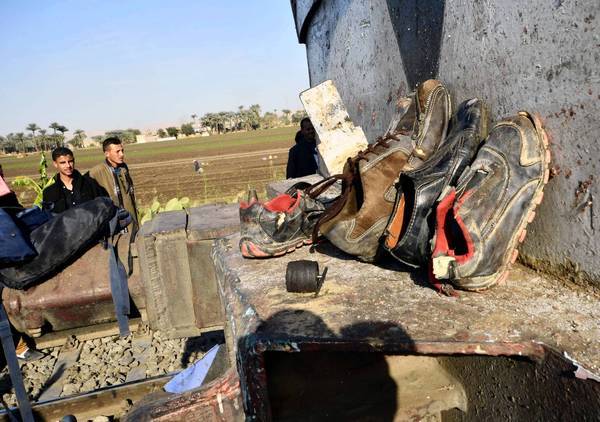 The shoes of school bus passengers were placed on the front of the train after the crash in November. (AFP/Getty Images)

In Sheik Wali, another place where leaders have failed to fix what is broken, many humbly accept the fate of their children, killed when train gates didn't close.

Let us eat first, he says. "I will tell you, after, my memories of who they were." Liver. Bread. Cheese. Coffee. A cigarette. A train hurtles past the village, shaking his table, slicing through fields of wheat.

Trains come so often that they feel like family, yes like uncles and cousins, or so they once did.

Hamada Anwar speaks of God and the harvest. But the meal is done and he can no longer put off the story he has promised to tell. He breathes in and begins. It was just after dawn in November when the train — he wants to say here that he's forgiven everyone — raced through the crossing and tore into the school bus carrying his children.

Four of them. A tangle of backpacks, drawings blowing in blood and dust. Reem, 10; Adham, 8; Arwa, 6; Nour, not yet 3. He gathered and buried them in a graveyard beneath the black smoke of a brick kiln. Forty-six other children died that day. The bus driver too. All of Egypt mourned.

The government paid out $5,000 per child; no one ever asked how one calculates the worth of a son or daughter. Officials vowed that the tracks would be made safe with alarm bells and sturdier crossing gates. They haven't been built.

The dead children of Sheik Wali and neighboring villages have no memorial. Their brief lives linger in dirt alleys and fields, and in the soft cadences of fathers and mothers who speak of God's will. It is this way, too, with crops, yields and droughts, and all those things that accumulate into the austere rhythms of the nation's south.

"Two weeks before the accident," says Anwar, a police officer who moonlights with his brothers in a lumber business, "my wife saw beautiful doves in a dream. They flew away and didn't come back.... When I got the call that morning, I washed and went to the mosque to pray. I knew what awaited and I asked God to let me find the bodies of my children. I went to the morgue." 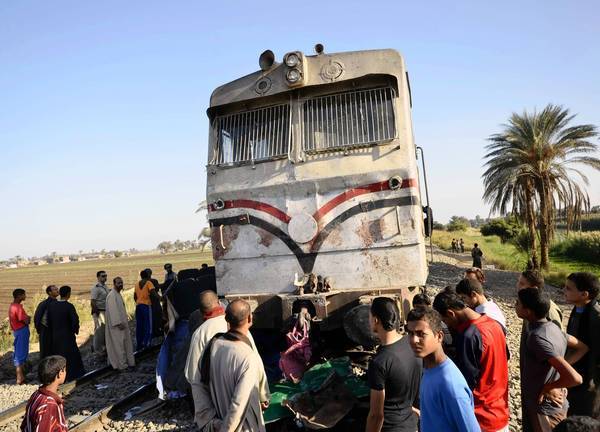 Egyptians inspect the damage after a train crashed into a school bus in the village of Sheik Wali. A guard at the crossing failed to close the gates that November morning, and 50 young children were killed. (AFP/Getty Images)

Egypt is a land of sorrow and regret, paralyzed between the corrupt legacy of the past and the failure of new leaders to fix all that is broken.

"Patience," says Anwar. "Everyone here is patient. It is all we have."

Anwar wears a pale green tunic and white sandals. The raisin-shaped prayer bump on his forehead — a sign of decades of prostration — is wider and more pronounced than on most men. His voice, even when speaking of his children, never wavers or breaks.

His hair is growing back. He had shorn it to purify himself when he and other fathers who lost children in the crash went on a pilgrimage to Mecca. The government paid for the trip to ease their suffering; many of the men could have never afforded to go on their own. The journey drew them together in a way their fields never could.

The fields, though, are where they returned.

Furrows stretch flag-like beyond the village toward mountains the color of honey and rust. Plastic bags, resembling withered balloons more than scarecrows, billow from sticks. Some farmers have tractors, others horses. What a man grows, his family eats. But the parents wanted more for the children who died, and sent them to a better school in another town.

Nothing's been done to make this crossing safer. This country is full of corruption. I put bones and flesh in bags that day. Nobody has forgotten what happened here."

"He walks a little bit now," says Yasser Talaat Sayeed, a vegetable truck driver. His son, Said, 9, survived the accident. "He doesn't go to classes anymore. He's too affected. He lost five of his friends. He throws fits and tantrums."

"He's like the wind," says Said's uncle, a brusque man in a white turban. "One hour he's happy, the next sad."

"His spleen was removed and part of his liver," says Sayeed. "He fractured his pelvis, shattered his ribs. He wears a brace and needs more operations. We wanted our children to be educated, to be better than farmers. And now we have this."

Sayeed's daughter, Menna, 6, was killed in the crash. She is spoken of, unnamed, as if in a parable: "God brought things to us and he took them away."

Anwar shakes his head. The men sit on a wooden bench and look into the distance. A boy brings beans fresh from the earth. The fathers scrape away the dirt, crack the pods and eat. The air grows cold and night clouds press closer. The boatmen on the Nile pull in their nets and a voice on a radio chants passages from the Koran.

Trains whoosh by, a blur of faces in passing windows. News of their arrival comes minutes before, when a guard answers a battered black phone — the kind you see in long-ago movies — and slides shut the crossing gates. The gates didn't close that morning in November; the crumpled bus was pushed nearly two miles down the tracks. 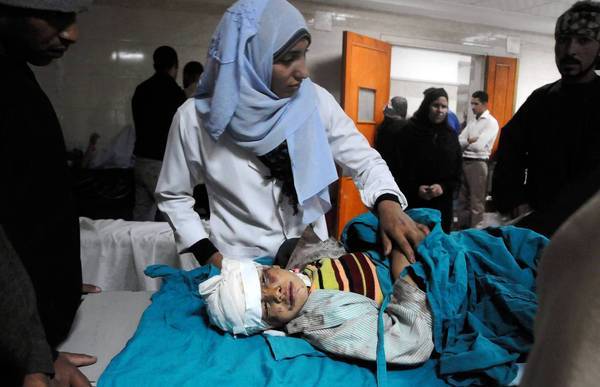 An Egyptian doctor attends to a child who was badly injured in the collision of a train and school bus in Sheik Wali. (AFP/Getty Images)

"Nothing's been done to make this crossing safer," says Attiya Farrag Mahmoud, an old man with coarse hands walking along the rail on his way home. "This country is full of corruption. I put bones and flesh in bags that day. Nobody has forgotten what happened here."

Anwar has forgiven, though. Days after he buried his children, he went to the family of Sayed Abdelradwan, the crossing guard who is in jail awaiting trial on negligence and manslaughter charges. Their home — a single room and a rooftop — is the only escape from the whispers and the gossip for Abdelradwan's two wives, four daughters and one son.

"They are very poor and I offered a symbolic amount of money," he says. "But his wife refused. She told me: 'It is enough that you have forgiven us.'"

Abdelradwan worked the 7 p.m. to 7 a.m. shift. Some say he was on drugs or sleeping. His family denies this and says that he often complained that he was not alerted by the preceding station that a train was coming. Rail fatalities are common on this stretch.

"I know people talk about us behind our backs, but that's their right, they lost their children. But this is life; it pushes and we push back," says Abdelradwan's daughter Sabreen. "Some people said they would kill him if the government lets him out of prison."

The crossing guard's second wife, Nadia, sits near the home's only sink and wonders how the family will survive. "They haven't given us his salary since he was locked away. How do they expect us to eat?"

Sabreen says, "Everything is expensive, except for people, they're still cheap."

Wheat blows at the village edge. The fields were wider once but sons and daughters came and new houses rose on black soil. Anwar's father taught him to seed and harvest, but that was long ago, back when he had a boy's dream of going to college and memorizing the Koran. There was no money and soon he had his own children.

A toy or the face of a friend brings them back. They come unannounced, they drift away; their pictures glow on his cellphone. He has one child left: Zamzam, named for the holy water in Mecca. She is not yet 2 and toddles up to him wearing a dress and a pink bow in her hair. He picks her up, slowly, as if cradling blown glass, a thing too delicate for this land. 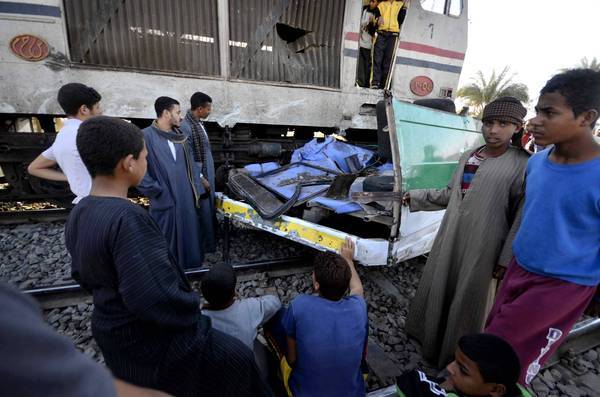 Egyptians in the village of Sheik Wali survey the grim scene after a train crashed into a school bus. (AFP/Getty Images)

After the accident he and his brother donated a few acres to build a new school so children wouldn't have to leave the village. "It never came to be. No one in the government answers when we call anymore," he says. "But what can we do? We cannot stop the trains."

He drives to the graveyard. Down a dirt path, a few steps off the road, he points to squares in a mud wall. Reem. Adham. Arwa. Nour. Their names have not yet been chiseled. Workmen at the brick kiln feed dried corn stalks into banked fires. Smoke twists above the fields and in the distance a lone farmer moves a scythe through wheat.

"One is humbled to stand here," says Anwar, running his hand over the mud wall. "When God gives us something, we know down deep it is really his."

He doesn't say anything more.