Terry Tussey, 73, began working with guns more than 50 years ago in Southern California and can restore or repair most any firearm brought to him. 'This isn't a job,' he says. 'This is who I am.' 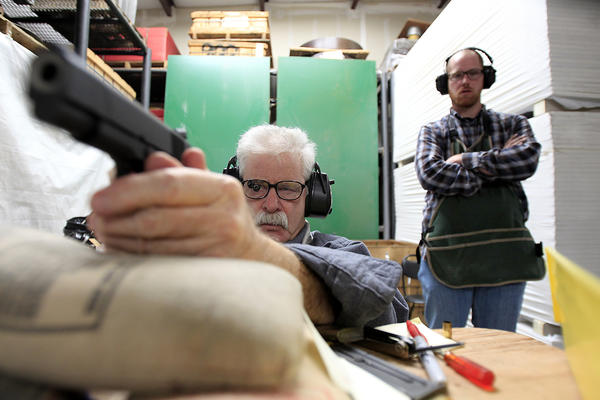 Terry Tussey, 73, began working with guns more than 50 years ago in Southern California and can restore or repair most any firearm brought to him. 'This isn't a job,' he says. 'This is who I am.'

For Terry Tussey, a gun is the perfect marriage of form and function, a carefully crafted machine that can contain an explosion delivering 20,000 pounds of pressure per square inch and drive a bullet through a barrel at 1,000 feet per second.

Every spring, catch, plunger, plug, pin and cap must work for it to fire properly. Dirt, rust and abuse lead to jams, misfires and parts breaking.

This morning, he's holding a .45 semiautomatic, popularly known as a 1911. Built in the '70s with military surplus parts, it has a plastic opalescent grip and a slide engraved with what looks like the tendrils of a climbing rose.

The design's too garish for Tussey, but right now looks don't matter. He drops the magazine, pulls back the slide to make sure there isn't a cartridge in the chamber and soon has the gun in three pieces: barrel, slide and frame.

Like a puzzle cast in three dimensions, a 1911 has close to 50 parts, and each needs to fit together with a tolerance of less than a hair's breadth. Any play leads to the inaccuracy that Tussey found at the range this morning.

The best measure of a pistol's worth, he believes, comes at 20 yards when he tries to group five shots within the space of a nickel. This .45 didn't come close.

He goes to his workbench and grabs a magnifying visor for a closer look.

Tussey, 73, began working with guns more than 50 years ago in Southern California and can restore or repair most any firearm brought to him. He describes himself as a gun mechanic and has a reputation for the 1911s that he builds from scratch.

He calls his business Tussey Custom, and it sits on the outskirts of Carson City on a road that leads to a brothel known as the Moonlite Bunnyranch and a stone marker that honors the Pony Express route that passed nearby. 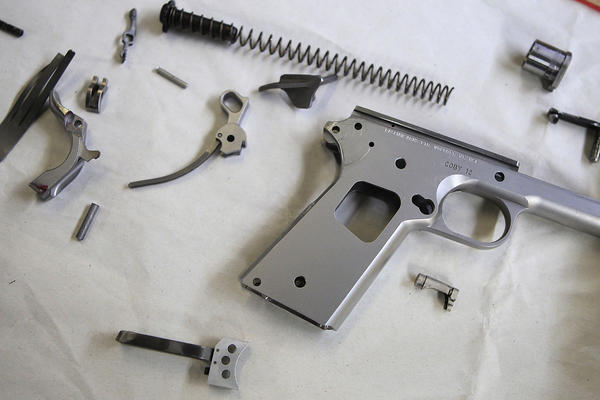 Parts from a 1911 await Tussey on his workbench. He builds only about four of these guns a year. The parts come from around the country: frame and slide from Vermont, trigger from Escondido, barrel from North Carolina, hammer from Missouri and grip from Carson City. (Brian van der Brug / Los Angeles Times) More photos

Lawmakers in Washington and in state capitals around the country are arguing over gun-control legislation, but at Tussey Custom, there is no debate.

Instead there is an appreciation — aesthetic, mechanical and even constitutional — for these machines that have become such an intrinsic part of American life.

A warm afternoon breeze blows through the roll-up door. Dvorak's New World Symphony is playing as a lathe purrs through the inner circumference of a barrel bushing. Workbenches are crowded with tools, parts and yellow plastic trays holding guns in need of repair.

The front door chimes, and Tussey maneuvers his wheelchair to the office. A mountain bike accident eight years ago left him paralyzed from the chest down.

Rodney Ricks, a 56-year-old construction manager, has stopped by to pick up a 1911 that Tussey restored. A few new parts, rust and pitting sanded down, bluing added, and the gun, which dates to World War I, looks almost new.

Tussey specializes in 1911s, named for the year the Army approved the pistol as standard issue. "The best handgun ever made," he says with the conviction car enthusiasts save for their favorite ride.

Just a few weeks ago, he finished building a new 1911 for Ricks, who placed the order last summer.

"Terry is putting out work that no one can compete with," Ricks says. "In this day and age of instant gratification, it's nice to have someone to put the time and effort into making something like this."

The pistol, which cost $4,000, is made of stainless steel and has a black trigger and hammer, blued safety and slide stop, and a grip made of mastodon ivory. It gleams in the light.

Tussey builds only about four of these guns a year. The parts come from around the country: frame and slide from Vermont, trigger from Escondido, barrel from North Carolina, hammer from Missouri and grip from Carson City. He then makes sure everything fits.

He is one of 61 gunsmiths registered with the American Pistolsmiths Guild. The trade organization promotes the work of elite customizers, whose pistols must pass standards for accuracy and artistry established by senior members of the guild.

Enrollment in the guild has held steady through the years, says its president, Marc Morganti, but most of the members are in their 60s. It takes time to learn the craft, he says, and it's hard to make a living on the wages of a pistolsmith.

"It's a sign of the times," Morganti says. "The old-school guys are getting left behind."

The nickel-plated .38 is nothing Tussey would own, let alone shoot, yet he understands why it is important to its owner. It's been in the family for three generations.

He calls Kevin Smith over to his bench. Smith, 23, is one of Tussey's three apprentices. Smith tried selling cars after getting his GED but wanted to work with guns and was willing to pull weeds in Tussey's parking lot just to get a start.

The latch that holds the .38's cylinder in place is broken, and because the pistol is so old, Tussey will have to modernize it.

"We need to find a new spring," Tussey says, sketching his proposed fix on a scrap of paper.

There are 86 guns in Tussey's shop awaiting repairs or modifications. Nearly 20% of his customers are from Southern California.

Like the clock, sewing machine and typewriter, the mass-produced gun was a triumph of the Industrial Revolution: dependable, reliable and manufactured in quantities that amaze Tussey.

There is a big difference between machines that shoot bullets and firearms that shoot quickly, accurately and are beautiful."

He points to an 1863 Colt revolver that he's restoring. The model came out in 1861, when only one gun was manufactured; two years later the factory had churned out 15,000 of them.

History flows through these firearms. The owner of the Colt traces it back to his great-great-grandfather, a surgeon for the Union Army, who learned his profession in Chicago before heading south after the siege of Vicksburg.

Once, one of Tussey's apprentices was taking apart a 1911, and a stream of black sand poured out of the grip. Its owner explained that the pistol belonged to his father, a Marine who had fought on the beaches of Iwo Jima.

"What makes a good gun?" he wonders. "Good sights, good triggers and good reliability — and none of the guns on the market today hit all those marks."

He is often asked to make new guns better, and when a customer stops by with two revolvers purchased online, Tussey can't make any promises.

The complaint is common: The trigger springs are too heavy, making it too difficult to pull the trigger and stay on target.

Tussey tries not to be dismissive, but the revolvers cost under $400 apiece. Made of polymer and metal, these types of guns are flooding the market, and their owner knows they're cheap, referring to them as "Tupperware" or "plastic" guns. A well-made gun of steel and of similar caliber would cost twice as much.

Tussey took apart his first pistol when he was a teenager growing up in Orange, not far from where the Crystal Cathedral would be built. As a boy, he would go into the groves and practice on oranges, leaving his mother to wonder how juice stains got on his trousers.

He wanted to master the quick draw and entered competitions at Big Bear Lake. He is a southpaw and is deaf in his left ear from having shot, by his estimate, a million rounds by the time he turned 35.

He worked for a gun store in Culver City, a sporting goods store in Orange County and eventually became a representative for Colt and Smith & Wesson, and during the recession in 1982, he opened his shop on Main Street in Santa Ana. 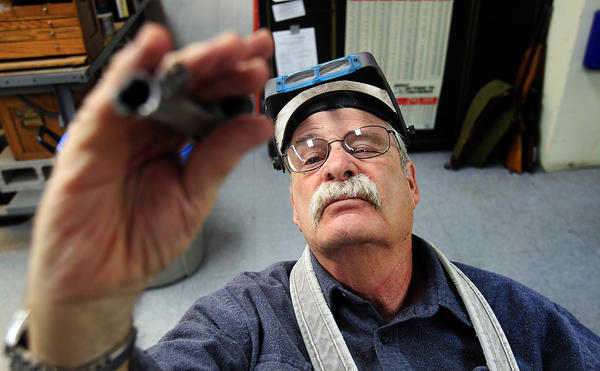 Tussey checks the details on a 1911 pistol barrel at his workbench. He moved to Nevada when he realized that gun legislation in California would affect his business. (Brian van der Brug / Los Angeles Times) More photos

In 1999, he and his wife, Teresa, left California. Gov. Gray Davis had signed legislation requiring handguns — made, imported or sold in the state — to pass a safety test. Once approved and listed with the Department of Justice, the firearm cannot be altered in any manner other than cosmetic.

The law was meant to protect consumers from poorly made guns — Saturday Night Specials — but it had a chilling effect on custom manufacturers who could not afford to build the extra guns needed for testing.

"It gave the advantage to inexpensive mass-produced pistols," says Gary Smith, sales manager for a Vermont-based company that provides Tussey with parts.

Tussey is sympathetic to efforts to restrict gun ownership, but he doesn't believe any legislation would stop gun violence.

He favors background checks and hunter safety courses, and he can't see a purpose for assault weapons or large-capacity magazines, but he is a passionate supporter of the 2nd Amendment. He keeps a loaded 9mm Glock on his workbench and a 9mm Rohrbaugh in his pocket.

If owning a gun wasn't important, he argues, it wouldn't have been listed second in the Bill of Rights.

More great reads from Column One