On Dapper Day at Disneyland, it’s cool not to be casual

Sartorial events held at Disneyland attract thousands who enjoy the outmoded notion of dressing up, whether in vintage or modern style. No torn jeans here. 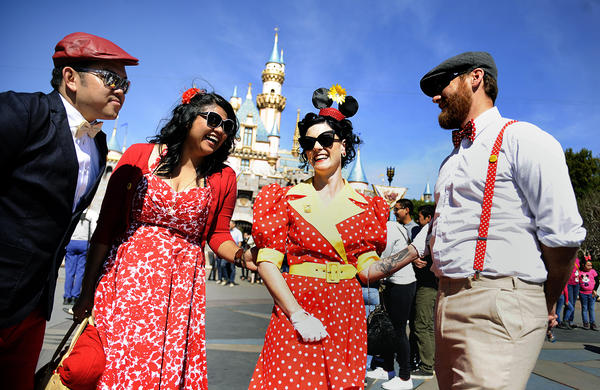 Sartorial events at Disneyland attract thousands who enjoy the outmoded notion of dressing up in vintage or modern style.

By Rick Rojas, Los Angeles Times
Photography by Christina House, For The Times

A day at Disneyland is a marathon, and the visitors lining up in the plaza outside the park were prepared to make it to the finish.

They had on sneakers and sweats and packs (both fanny and back). Young men with knee-length basketball shorts hanging off their hips shuffled alongside dads in cargo shorts and socks pulled up to their shins. Moms, their hair pulled back in no-nonsense ponytails, trudged along in capri pants pushing strollers loaded down like the truck in "The Grapes of Wrath."

Then, like a vision from another time, Christina Forst stood beside a lamppost in a blue floral dress and felt hat decorated with peacock feathers. Her lips were painted red and her fair skin matched the pearl drop earrings and double-strand necklace she had crafted herself.

"It's just as comfortable coming in a dress as jeans and a T-shirt," said Forst, a travel agent from Irvine. "Why not add the jewelry and the makeup, and really make a statement?"

She was one in a group of thousands who had come on a recent Sunday for the twice-a-year event known as Dapper Day, hoping to add a touch of sartorial sophistication to a place where the words "Sunday" and "best" rarely meet.

Many saw themselves as tastefully appointed insurgents rebelling against a world in which jeans and golf shirts are acceptable at the office, celebrities have to be reminded to cover themselves when appearing on the red carpet and the attire in airport terminals looks better suited to a track meet than to air travel. 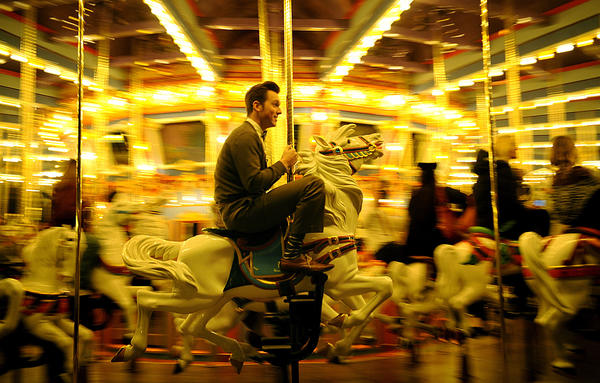 Down Main Street USA, the washed masses streamed: the wannabe Don Drapers, the noir vixens, the lonesome members of barbershop quartets, the old-school gangsters and the woman whose hands magically became as expressive as a Disney princess' as soon as she slipped on a pair of alabaster gloves.

Forst had come with her husband, Scott, natty in his pinstripe suit. Her 4-year-old son, Sebastian, rested in her arms, rumpling his dark suit with a matching vest and pocket square.

Her husband snickered. "I'm laughing," he said, "because she has hundreds."

Dapper is more than an adjective, it's an attitude.

"People are looking for an excuse to dress up," said Justin Jorgensen, who started Dapper Day in 2011 and has organized five of the events, all at Disneyland. The latest Dapper Day — the same Sunday as the Oscars, Hollywood’s own dress-up day — drew an estimated crowd of 10,000 to the Anaheim park and about 1,000 more at Florida's Disney World.

Everything, including the workplace, pushes this idea of being casual. When do I get to wear my great stuff?"

"Everything, including the workplace, pushes this idea of being casual," said Jorgensen, 38, of Burbank. "When do I get to wear my great stuff?"

Most of those in attendance that day were in their 20s and 30s. They had come of age in a time of shoulder-padded power suits, windbreakers in neon colors and frizzy hair — not exactly a time that will be remembered for its classic elegance.

Ilse Metcheck, president of the California Fashion Assn., said young people today are stuck in a time that hasn't forged its identity.

"We're in an undefined fashion era," she said, "and they’re looking for a definition."

The breeze picked up, and Harmony Leiker had to hold on to her wide-brimmed velvet hat to keep it from flying away.

"With all this wind, I'm going to be doing this all day," she said, as a gust whipped through the entrance to the California Adventure Park. "Worth it! I'm not giving up this hat." 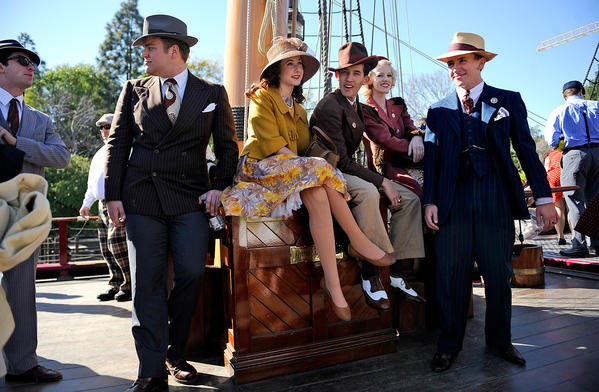 Gathering at the sailing ship Columbia at Disneyland. More photos

Her outfit had a 1940s theme, with a knee-length floral sundress to go with the hat."

"All my stuff is genuine vintage," she said.

Her friend Scott Sytten had come in a dark three-piece suit with a hat matching the black and grays of his vest.

"If I had a job where I could dress like this every day, I would," said Sytten, 30, a liquor inventory control auditor from Los Angeles.

"I think I was born in the wrong time," added Leiker, a 32-year-old artist from Culver City fascinated with costume design. "I miss the formality of things."

Outside the Mad Tea Party ride, Katie McMillan posed with her friends in an oversized pastel-colored teacup. Her friends had dressed in wide-brimmed hats and Jackie O sunglasses, touches they thought would make them dazzle with old Hollywood glamour. McMillan, 30,a high school English teacher from San Diego, wore a red peplum dress she’d had in her closet, then spent way more money than she’d intended to find the black pin, necklace and knit shrug to match. 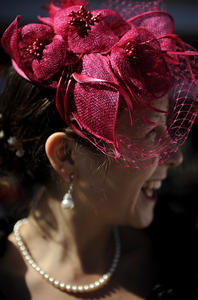 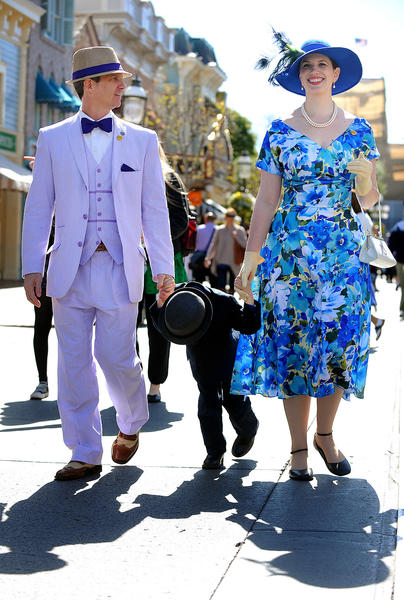 It was worth it:

Scattered throughout the park, the dapper crowd was as much of an attraction as the pair of chipmunks posted near the entrance. Less formally attired guests stopped them to ask why they were so dressed up and even snapped pictures with them. Quite a few asked for information, so these possible recruits for the fashion insurgency could join next time — Sept. 6 at Disneyland and also in Paris.

In the Old West settlement of Frontierland, with its saloon and log buildings, Jeffrey Kleitsch’s tuxedo coat shimmered like prospector gold.

The 19-year-old student from San Diego — with Ray-Bans on and dark hair slicked back — was wearing a copper-colored jacket so slim-fitting he could barely raise his arms.

Dapper Day was just another chance for him and his friend, Kathleen Dore, to venture out with their signature flair.

"I’m dressing for myself," said Dore, 20, in a yellow trench coat, blood orange socks and a chunky turquoise necklace. "I'm wearing what I want to wear."

"Yeah," Kleitsch confessed, "we're pretty weird. We do stuff like this all the time."

Nathaniel Marshall preferred what he called a "genteel" look.

He recalled a line he’d heard before: "One of the most polite things you can do for other people is to dress nicely, because you're not being an eyesore." 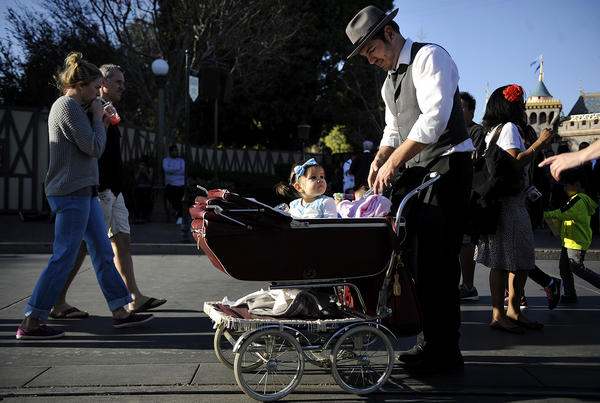 Sometime after the Disney characters wound through the park for the afternoon parade, an armada of strollers began its push toward the exit. The sun faded behind Fantasyland, pink light bathing the spires of Sleeping Beauty's Castle and a full moon peeking over the Matterhorn.

The King Arthur Carrousel twinkled as the line formed for one of the final events of the day, the Dapper Derby. It was an anachronistic assembly of how to look elegant over the centuries: the Victorian women with their waists cinched in corsets, the Audrey Hepburns in their little black dresses, the preppy modern men with pants rolled at the cuff, loafers sans socks and hair that somehow kept its sheen.

The carousel spun. The men had on their porkpie hats. The women were perched just so in ladylike postures. Together, they bobbed up and down on gleaming white horses as the calliope music played.