How much has L.A. really changed since the 1992 riots?

Los Angeles' recovery from the 1992 riots has been slow and uneven.

The unrest, which killed 53 people and injured 2,300 others, exposed racial tensions, economic inequities and institutional dysfunction.

Now, 23 years later, there have been tangible gains. The LAPD, once a predominantly white institution distrusted in non-white communities, now more closely reflects the city's demographics. The force is majority non-white, both in its patrol ranks and management. Relations with minorities communities have improved.

RELATED: Baltimore riots and the long shadow of 1992 Los Angeles

But the economy in South Los Angeles remains challenged compared with many other parts of the city, with high unemployment and poverty rates. Some middle-class blacks fled to the suburbs in the years after the riots, which swept the city after the acquittals of four Los Angeles police officers charged in the beating of Rodney G. King.

And those who remain struggle to find steady work, according to a 2012 report by The Times. As of 2012, median income in parts of South L.A. were lower than in 1992 when adjusted for inflation.

One way of tracking how L.A. recovered from the riots is through Times polls. Here's a timeline culled from The Times archives: 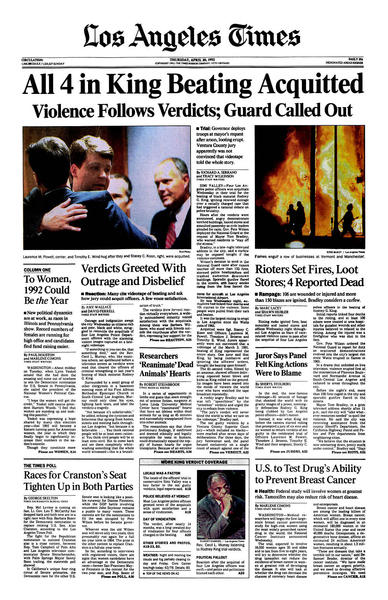 In a Times poll several months after the unrest, Los Angeles still felt wary and wounded.

Most residents said another outbreak of rioting would be likely within the next few years. The poll found 67% of residents believed the city had not seen the end of the violence.

Among whites, 3 of 4 predicted more violence. Two of 3 African Americans also did, as did 3 of 5 Latinos.

Of those surveyed, 85% said "things are going badly" in Los Angeles, compared with 60% who expressed that view before the riots and 25% who felt the same way in 1985, the year after the Los Angeles Olympics.

A year later, the city’s confidence was coming back -- but slowly.

Sixty-nine percent of Times poll respondents said they were confident that city officials and the Los Angeles Police Department could quell a major outbreak of violence should it occur.

And 58% of respondents said they approved of the way the LAPD handled its jump, up from only 40% in the month after the riots.

1997: Optimism, but worries about race

As L.A. continued to recover from the riots, a Times poll found residents in a more optimistic mood. A strong majority believed the city had made progress in its emotional recovery.

But some warning flags remained. Two-thirds of those queried believed race relations in Los Angeles were poor (that was down from 82% in the months after the riot).

Overall, attitudes about the city were on the rise. Fifty-one percent of respondents said life in Los Angeles was going well. A month after the riots, 85% of residents had said things were going badly; one year later, in April 1993, 76% still thought so. Even a year before the rioting, an April 1991 Times poll found 54% had been dissatisfied.

The Rampart police corruption scandal cause confidence in the LAPD and the city as a whole to fall for the first time since the riots.

According to a Times poll, 55% of respondents said they believed most police were honest and hard-working. But just 36% had a favorable impression of the way the LAPD as a whole did its job.

Ten years after the unrest, 69% of Angelenos polled agreed that at least some progress had been made toward the question King posed at his first public appearance on the third day of the rioting: "Can we all get along?"

A solid majority, 78%, felt Los Angeles had at least somewhat recovered emotionally from the riots, although fewer blacks, 67%, held that view than did Latinos (85%) and whites (77%).

The Times didn't conduct a poll for the 20th anniversary of the riots. But a survey by the Center for the Study of Los Angeles at Loyola Marymount University found that residents felt the city was safer and race relations were better compared with 1992.

They also didn't expect to see a repeat of the unrest in the coming years.