Because of conservatives’ visceral dislike of Obama, it’s a tough sell, but the Rev. Jim Goodroe speaks out about welcoming the ‘stranger.’ 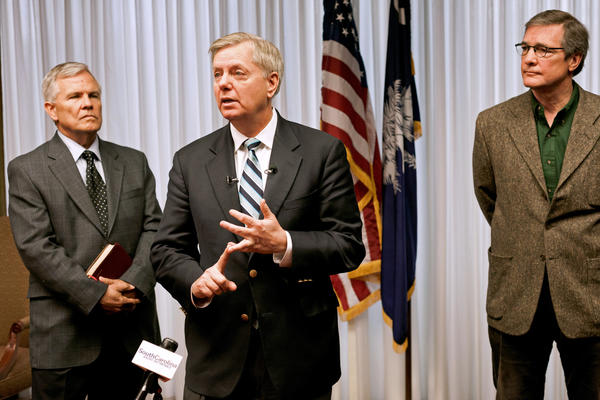 Because of conservatives' visceral dislike of Obama, it's a tough sell, but the Rev. Jim Goodroe speaks out about welcoming the 'stranger.'

The Rev. Jim Goodroe was driving down Interstate 85 toward Atlanta one morning when, as sometimes happened in the quiet of a long trip, he sensed God's presence.

Goodroe had been pondering a problem. He was trying to help a colleague find a South Carolina pastor to record a radio ad to promote biblical arguments for overhauling the nation's immigration laws.

The commercial would run statewide as part of a national campaign by the Evangelical Immigration Table, a coalition of religious leaders, to persuade conservative Christians, particularly Republicans, to back a pathway to citizenship for immigrants in the country illegally.

Goodroe, the missions director for a network of Southern Baptist churches, had pastors in mind. But in this buckle of the Bible Belt, where religion and politics intertwine, it was a very big request. One pastor had already declined.

A moment of clarity stirred inside him.

"The Lord seemed to say: 'Why don't you do that spot? You're the most immigrant-friendly evangelical in South Carolina,'" Goodroe recalled.

He pulled his 2002 Honda Civic into a rest stop and texted his colleague.

Religion guides Goodroe's interest in changing the nation's immigration laws. He cites the message in both the Old and New Testaments to welcome and comfort the "stranger."

Within days of agreeing to do so, Goodroe recorded the commercial, which began airing in the spring on Christian and conservative talk stations.

"Christ calls evangelicals to compassion and justice," he says in the ad, in a slow Southern cadence. "So please join a growing movement of Christians asking our political leaders for immigration solutions rooted in biblical values, which reflect each person's God-given dignity, respect the rule of law, protect family unity, guarantee secure borders, ensure fairness to taxpayers and establish a path toward citizenship."

The message was meant to appeal to the compassion of churchgoers. But it also tapped a well of distrust of President Obama.

"When I hear from critics, usually early in the conversation, they'll say, 'I'm against Obama, and this helps Obama,'" Goodroe said.

"I'm trying to win spiritual converts, not political converts," he said. "As a Christian, I'm saying, we have to do what the Bible tells us to do — whether or not it advances our politics."

Goodroe understands the challenge he faces.

"I got an email telling me to go to hell," he said, flashing a quick smile. 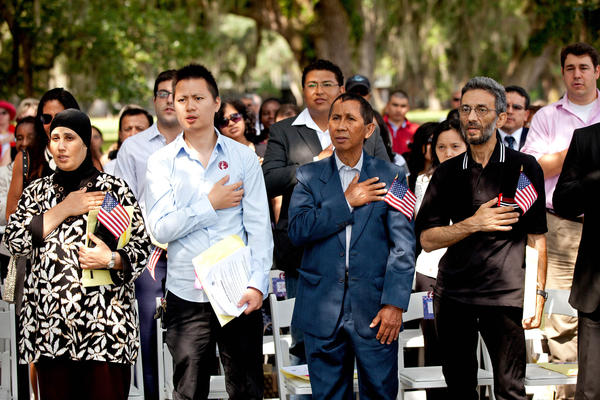 New American citizens recite the Pledge of Allegiance during a naturalization ceremony in Charleston, S.C., in 2010. South Carolina was home not long ago mostly to families with deep Southern roots. In the last decade, Latinos and other immigrants increasingly have arrived. (Richard Ellis / Getty Images)

Goodroe, 66, is a reliable Republican whose last brush with politics was when he was elected president of his fraternity at the University of Georgia. He grew up in the segregated South, married his college sweetheart and raised three sons.

He had never met an "international," as he calls immigrants, until he moved to South Carolina's upcountry more than a decade ago.

The state, the birthplace of the Civil War, was home not long ago mostly to families with deep Southern roots. Many worked in its textile mills and peach orchards. In the last decade, Latinos and other immigrants increasingly have arrived. Tiendas and taquerias now dot the landscape around Spartanburg.

The newcomers delight Goodroe. He greets the waiter at a Mexican restaurant in broken Spanish and shows off noodle houses bringing new vitality to downtown, where the tallest building, at 17 floors, is the world headquarters of Denny's.

We have to do what the Bible tells us to do — whether or not it advances our politics."

Goodroe took the job at the Spartanburg County Baptist Network in 2000, drawn by the possibility of bringing immigrants to Christ. His own church trips abroad had taught him the limitations of overseas missionary work, and he wanted to try building God's kingdom closer to home.

He helped start a multiethnic evangelical church, Kaleidoscope, as a way to welcome immigrants of all faiths — hoping they might one day accept Jesus Christ as their savior. Churches in his network, an umbrella for 100 Baptist congregations, expanded their ethnic ministries — Spanish, Cambodian — as intimate alternatives to mega-churches that he calls "cool churches for white people."

"I'm just interested in any internationals here, and trying to engage them," he said.

Up the highway from his office is a minimarket with a gas station out front, and behind the counter is the Hindu family that runs the place. Goodroe has made a habit of stopping in for his second cup of morning coffee to strike up a conversation with the owner. He started his relationship by asking whether the family was from India and mentioned that he had visited.

Over time, he invited the owner to lunch and showed pictures from his trip. Later, the couples had dinner at Goodroe's home. His wife, a retired schoolteacher, departed from her usual dishes and prepared a meatless meal with stir-fried vegetables.

Eventually, he persuaded the husband to attend a Baptist service. Nothing has come of it yet, but the reverend doesn't mind.

"The more immigrants you meet, the more you realize: Immigration is a political issue, but immigrants are people," he said. "Let's begin by treating them as people." 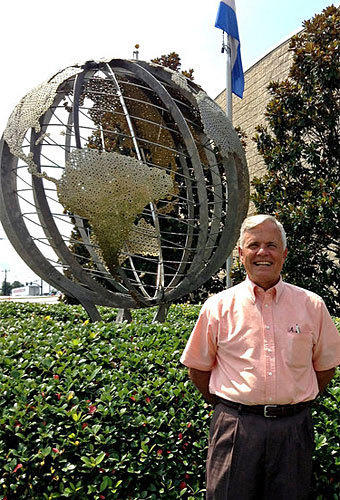 "The more immigrants you meet, the more you realize: Immigration is a political issue, but immigrants are people," says the Rev. Jim Goodroe of South Carolina. "Let's begin by treating them as people." (Lisa Mascaro / Los Angeles Times)

This year, Goodroe organized a conference for church leaders and others to highlight the biblical underpinnings of immigration reform.

The event was to be held at one of the area's largest mega-churches, First Baptist North Spartanburg, which welcomes Republican presidential hopefuls during campaign season.

As Goodroe was going through his email list making invitations, he stopped at one name: Larry Bateman, a retired church missions leader who volunteers at First Baptist North Spartanburg.

He and Bateman are old colleagues. After the 2008 election, Bateman became a prominent conservative activist and remains in disbelief that Obama was elected not once but twice.

"I paused," Goodroe said. "I knew he was to the right on this. But I knew, as a Christian and a gentleman, he wouldn't be disruptive. And I wanted to get the information to him."

At the conference, a local pastor, Guillermo Madrigal Laurent, a Costa Rican immigrant, told of his predicament. Laurent heads one of the largest Spanish-language Baptist churches in South Carolina, Iglesia Bautista Renacer. He and his wife have been separated for several years after she was denied reentry to the U.S. for staying too long on her previous visa.

Laurent remained in Spartanburg on his religious work visa to run his church, and recently became a legal permanent resident. He is raising his two American-born daughters alone, while his wife is with their Costa Rican-born son. He has prayed for Goodroe's work. "We need more Jims," he said.

Bateman was moved by Laurent's story, but he was not fully swayed to Goodroe's position.

"The principle of welcoming is one thing, but on the other hand, Romans 13 tells us to obey the powers that be," Bateman said. "There's more than just welcoming strangers. There are strangers who are outside the law."

Yet as Bateman discussed his views over a soda at a Hardee's, he couldn't help but wonder: If Congress passed immigration reform, would it help reunite the pastor and his wife?

"Anyone in the United States that has half of a human heart says, 'Yes, there's a need for immigration reform,'" Bateman said. "It's just how you do it." 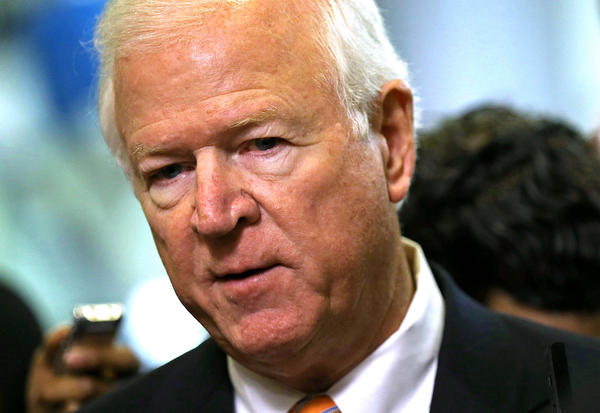 Sen. Saxby Chambliss (R-Ga.) says of Goodroe, "Jimmy is very, very well respected, so I think he'll have an impact. But you know immigration is such an emotional issue, and it's not going to be an easy road for him -- even in the evangelical community." Chambliss voted against the landmark immigration bill. (AFP/Getty Images)

Goodroe's radio ad has run more than 900 times this year in the state as part of the Evangelical Immigration Table's effort to saturate regions represented by lawmakers who could prove influential.

South Carolina is home not only to Sen. Lindsey Graham, a GOP architect of a bipartisan immigration reform bill, but also to one of its chief opponents, Jim DeMint, the state's former senator who now heads the Heritage Foundation, a think tank. Organizers have spent $29,000 to air the radio ad.

What Goodroe thought would be an afternoon job in a recording studio has thrust him into the national debate.

In March, he spoke alongside Graham at an immigration reform news conference in Columbia, the state capital, and, in June, he traveled to Washington to lobby elected officials, including a stop by the office of a fraternity brother he had not seen in some time, Sen. Saxby Chambliss (R-Ga.).

"Jimmy is very, very well respected, so I think he'll have an impact," Chambliss said. "But you know immigration is such an emotional issue, and it's not going to be an easy road for him — even in the evangelical community that probably has more sympathy than some other parts."

Two weeks after their visit, the senator voted against the landmark immigration bill.

Goodroe was not disheartened. Recently, he and others invited evangelicals to a potluck dinner at a Spartanburg church to meet with immigrants, hear their stories and pray for Congress. 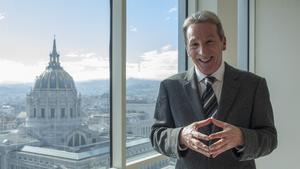 The left is a pain in my ass too. Everybody's a pain — that's just how it is."

Private foster system, intended to save children, endangers some 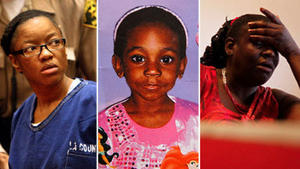 I promised [Viola] that it was going to be me and her against the world ... The world won."

Iraq veterans find the war at home is with red tape 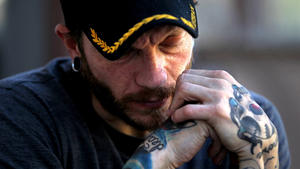 We're very quick to send people to war, but we're super slow taking care of those people that actually make that sacrifice."

Lisa Mascaro previously covered Congress in Washington, D.C., for the Los Angeles Times. She left in February 2018. A Los Angeles-area native, she has reported across Southern California, edited, traveled the States and worked in Texas. While the Washington correspondent for the Las Vegas Sun, she contributed as the paper won the Pulitzer Prize for Public Service. An economics and political science graduate of UC Santa Barbara, she also studied in Budapest, Hungary.