A federal appeals court is considering whether to lift a hold on ’s moratorium on travel from seven predominantly Muslim countries, and it has already received a flurry of written arguments on how the case should be decided.

A three-judge panel of the U.S. 9th Circuit Court of Appeals is expected to reach a decision after the Trump administration files further arguments by 3 p.m. Monday.

The case stems from a temporary restraining order issued Friday by U.S. District Judge James L. Robart in Seattle. The judge, an appointee of former President George W. Bush, blocked the government from enforcing President Trump’s Jan. 27 executive order. The ruling came in response to a challenge from the states of Washington and Minnesota.

The Trump administration has argued the states lack standing to challenge the travel ban because they cannot show the executive order has directly harmed them.

Read the executive order that ignited the firestorm and the ensuing legal filings. 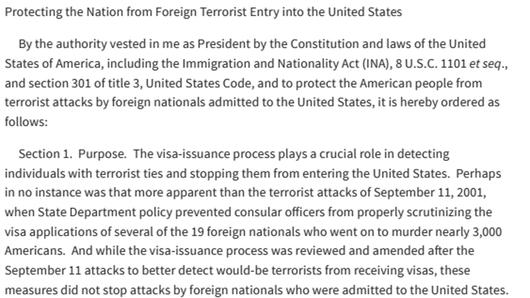 The U.S. Supreme Court has overturned some major 9th Circuit rulings in the past after concluding that those who sued lacked standing. Interestingly, the Obama administration was unsuccessful in trying to argue that states that challenged its executive order shielding a number of so-called Dreamer immigrants from deportation lacked standing to challenge the order.

In that case, the U.S. 5th Circuit Court of Appeals blocked Obama’s order, and the Supreme Court tied 4-4 over the issue. It was that case that Robart cited in ruling against the Trump administration on the current moratorium.

Whatever decision the 9th Circuit reaches on the travel ban could be the final word for some time, if the Supreme Court does not agree to review it, or can’t muster a majority. Keep in mind, though, that the appeals court on Monday is deciding only whether to stay the order until the legal merits can be reviewed.

Below are key arguments opposing parties have made on the travel ban hold.

The states claim that they are harmed by virtue of the damage that implementation of the order has inflicted upon the operations and missions of their public universities and other institutions of higher learning, as well as injury to the states’ operations, tax bases, and public funds. … These attenuated and speculative alleged harms are neither concrete nor particularized.

The administration also argued that the hold on Trump’s order harmed the government by infringing on the president’s power over foreign affairs. The states maintain the government has not suffered any real harm.

The injunction contravenes the constitutional separation of powers; harms the public by thwarting enforcement of an Executive Order issued by the nation’s elected representative responsible for immigration matters and foreign affairs; and second-guesses the President’s national security judgment about the quantum of risk posed by the admission of certain classes of aliens and the best means of minimizing that risk.

States of Washington and Minnesota

The states argued the ban violates constitutional guarantees of due process and equal protection and religious freedom. In the following section, the states, citing a precedent from a key same-sex marriage case, contend that the mere scope of the order shows it was intended to discriminate.

Even if the Order did not make suspect classifications, it would be illegal because ‘its sheer breadth is so discontinuous with the reasons offered for it that the [Order] seems inexplicable by anything but animus toward the class it affects.’ Romer v. Evans, 517 U.S. 620, 632 (1996). For several months it bans all travelers from the listed countries and all refugees, whether they be infants, schoolchildren, or grandparents. And though it cites the attacks of September 11, 2001, as a rationale, it imposes no restrictions on people from the countries whose nationals carried out those attacks. ‘It is at once too narrow and too broad,’ id. at 633, and cannot withstand any level of scrutiny. See, e.g., United States v. Windsor, 133 S. Ct. 2675, 2693 (2013) (‘The Constitution’s guarantee of equality must at the very least mean that a bare [legislative] desire to harm a politically unpopular group cannot justify disparate treatment of that group.’).

Second, Defendants cite Kleindienst v. Mandel, 408 U.S. 753 (1972), and Kerry v. Din, 135 S. Ct. 2128 (2015), for the proposition that so long as the President gives a facially legitimate reason for excluding an alien, the courts will not look behind that reason. But those cases dealt with the President’s power to exclude ‘an unadmitted and nonresident alien,’ i.e., someone who had no legal right to be here. Mandel, 408 U.S. at 762; Din, 135 S. Ct. at 2131. This case, by contrast, involves longtime residents who are here and have constitutional rights. Moreover, Justice Kennedy’s controlling opinion in Din held that courts should look behind the stated motives for exclusion even as to a nonresident alien if the plaintiff “plausibly alleged with sufficient particularity” “an affirmative showing of bad faith.” Id. at 2141. See also Cardenas v. United States, 826 F.3d 1164, 1171 (9th Cir. 2016) (same). Here, the State has plausibly alleged with sufficient particularity that the President acted in bad faith in an effort to target Muslims. ECF 18 ¶¶ 42-61. Thus, courts have both the right and the duty to examine Defendants’ true motives.

97 companies tell the court how the travel ban harms them

The companies, including , Twitter, Google and Apple, are making an economic argument on why the hold should stay in place. The companies cited the outsized role that immigrants have played in the United States in obtaining patents and winning Nobel prizes and argued that the ban could force industry to relocate overseas to ensure availability of talent from around the world. Trump campaigned on keeping jobs in the United States, and the tech companies argued that his executive order will have the opposite effect.

The Order effects a sudden shift in the rules governing entry into the United States, and is inflicting substantial harm on U.S. companies. It hinders the ability of American companies to attract great talent; increases costs imposed on business; makes it more difficult for American firms to compete in the international marketplace; and gives global enterprises a new, significant incentive to build operations — and hire new employees — outside the United States.

The Order violates the immigration laws and the Constitution. In 1965, Congress prohibited discrimination on the basis of national origin precisely so that the Nation could not shut its doors to immigrants based on where they come from. Moreover, any discretion under the immigration laws must be exercised reasonably, and subject to meaningful constraints.

Ten former national security, foreign policy and intelligence officials argued the travel ban was threatening the safety of Americans. Most of the officials served solely in Democratic administrations.

The Order will endanger U.S. troops in the field. Every day, American soldiers work and fight alongside allies in some of the named countries who put their lives on the line to protect Americans. For example, allies who would be barred by the Order work alongside our men and women in Iraq fighting against , [the militant group Islamic State]. To the extent that the Order bans travel by individuals cooperating against ISIL, we risk placing our military efforts at risk by sending an insulting message to those citizens and all Muslims.

The Order will disrupt key counterterrorism, foreign policy, and national security partnerships that are critical to our obtaining the necessary information sharing and collaboration in intelligence, law enforcement, military, and diplomatic channels to address the threat posed by terrorist groups such as ISIL. The international criticism of the Order has been intense, and it has alienated U.S. allies. It will strain our relationships with partner countries in Europe and the Middle East, on whom we rely for vital counterterrorism cooperation, undermining years of effort to bring them closer. By alienating these partners, we could lose access to the intelligence and resources necessary to fight the root causes of terror or disrupt attacks launched from abroad, before an attack occurs within our borders.

David Lauter is the Los Angeles Times’ senior Washington correspondent. He began writing news in Washington in 1981 and since then has covered Congress, the Supreme Court, the White House under Presidents George H.W. Bush and Bill Clinton and four U.S. presidential campaigns. He served as Washington bureau chief from 2011 through 2020. Lauter lived in Los Angeles from 1995 to 2011, where he was The Times’ deputy Foreign editor, deputy Metro editor and then assistant managing editor responsible for California coverage.