Twenty years after the Million Man March, thousands of black Americans on Saturday again poured onto the Mall in Washington, D.C., to demand justice.

Nation of Islam leader Louis Farrakhan, who was instrumental in organizing the landmark 1995 march, returned to galvanize black Americans at a time when dissatisfaction over ongoing racial inequality has re-erupted on the streets of Ferguson, Mo., and Baltimore.

“This is not a moment, this is a movement," Farrakhan, now 82, said in a lengthy televised speech delivered from a lectern in front of the U.S. Capitol. "When the brothers and sisters arose in Ferguson, you didn’t have any money, you had a principle, a principle you were willing to suffer for, that you felt was bigger than yourself and life."

Farrakhan added, “There is a volcanic eruption that is coming now.”

The 1995 Million Man March -- which U.S. Park Police controversially estimated only had 400,000 attendees -- "sharply focused on what black men should do for themselves, not what others should do for them," according to the Los Angeles Times' original story about the event. 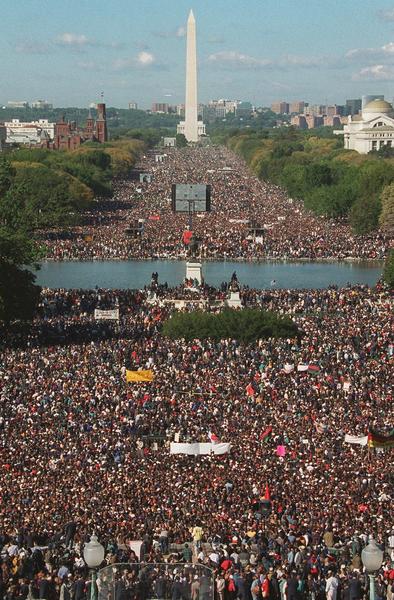 On Oct. 16, 1995 file photo, with the Washington Monument in the background, participants in the Million Man March fill Capitol Hill and the National Mall in Washington, D.Cl. (Mark Wilson / Associated Press)

The official billing of this year's "Justice or Else" march focused both inward and outward.

In additional to criticizing "police brutality," Farrakhan's vision for the event, posted on the march's website, included a call for self-accountability: "The evil that is in our community produced by us cannot be overlooked as we challenge our government for justice. We cannot pass by the killings, abuse and rapes, robberies and crimes we commit on one another and focus on the government as though we have done what needs to be done in our own backyard."

Among the attendees was Nate Smith of Oakland, who, according to the Associated Press, also participated in the Rev. Martin Luther King Jr.'s 1963 March on Washington and the 1995 Million Man March.

"It's something that I need to do," Smith, 70, told the AP. "It's like a pilgrimage for me, and something I think all black people need to do."

Here are a few images and messages from Saturday's event being shared on social media.

How the UC system is making patents pay off

What Exxon knew about the Earth's melting Arctic

The face of the federal prison release: A heavy dose of meth, crack and cocaine