INFOGRAPHIC: What country has highest number of active Twitter users?

Which country has the largest number of actively tweeting Twitter users? We’re No. 1! Yes, in what is likely a surprise to no one, the U.S. is tops. We have more than 50 million Twitter users, after all.

What may be more surprising is how many in the U.S. do not tweet.

A new graphic, below, from Statista and PeerReach shows the U.S. with 24.3% of tweeters in the world, followed by Japan at 9.3% and Indonesia with 6.5%. Twitter had 232 million users as of October, according to Amsterdam-based social media analysts PeerReach. Of those, the firm says, about 40% don’t tweet but just log in.

Even with the most Twitter users of any country, we’re way behind in Twitter penetration (meaning actual tweeting, not just logging in). Saudi Arabia wins that contest by far with 33% of its Internet users actively tweeting. By comparison, the U.S. total is just 11%. See the graphic at bottom. 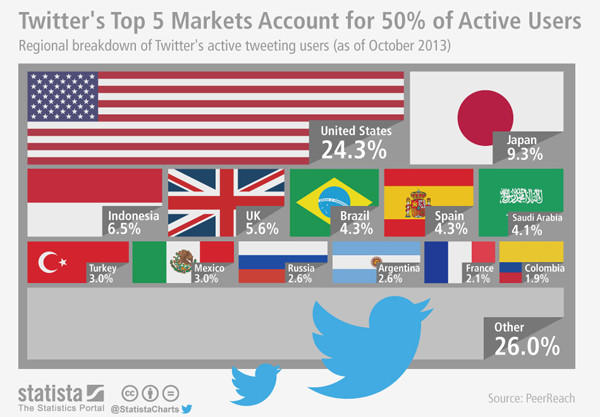 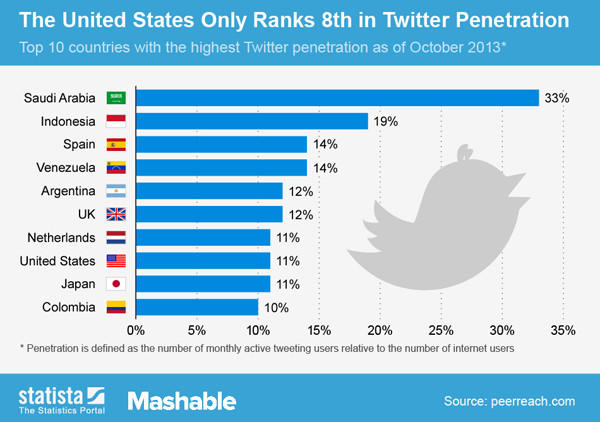 What would you say on ‘What Would I Say’

Rob Ford timeline: What the Toronto mayor has been up to since May