Just a few blocks from the Boston Marathon finish line, people were lined up Saturday, awaiting the arrival of a quartet of unusual healers.

The foursome is part of a corps with an amazing ability to calm and comfort people deeply shaken by violence or disaster just by being themselves -- dogs.

People milled around the entrance to the First Lutheran Church of Boston, which sits close to the end of the race route, the site of last year’s bombings. The church remained open throughout Marathon Monday 2013.

Richard Martin, director of the Lutheran Church Charities K-9 Comfort Dog Ministry, texted to say Luther, Rufus, Hannah and Ruthie were on their way. The dogs’ handlers had to hail a cab because the golden retrievers were getting stopped on the street left and right.

But the dogs are well accustomed to this level of attention, love and affection. They are also well versed in disaster relief. Comfort dogs visited Joplin, Mo., after the deadly tornado of 2011, the Northeast after Hurricane Sandy in 2012 and Oklahoma after the tornadoes of May 2013.

Luther and Ruthie spent five weeks in Connecticut following the December 2012 shootings at Sandy Hook Elementary. And comfort dogs were on hand after the April 15, 2013, Boston Marathon bombings. 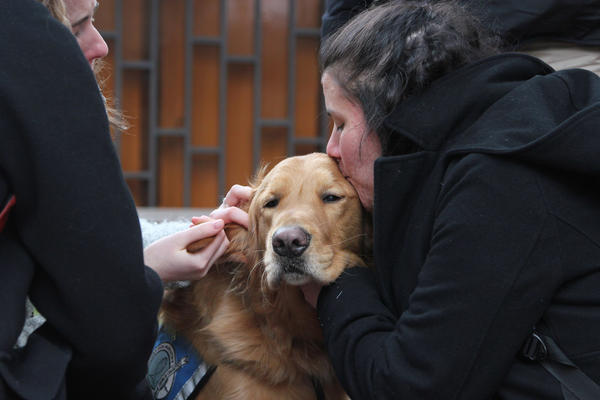 Everyone who was waiting for the dogs’ arrival Saturday had also visited with them last year. Among them was Aislynn Rodeghiero. She ran in the marathon in 2013 but was unable to complete the race because of the bombings. In the days following the tragedy, Rodeghiero visited the dogs to help calm her fears. She will be running again Monday.

Rodeghiero said of her decision to run again: “It’s just a commitment you make to others and yourself.”

And she also decided to revisit the dogs who helped her cope last year.

Martin said the idea for the canine ministry sprang from observations of people and their pets during Hurricane Katrina in 2005. The charity organization was helping with disaster response in New Orleans.

“We started to notice the bond between people and their pets during Katrina,” Martin said. Some pet owners refused to be rescued from their homes because they weren’t able to take their pets with them.

“So we went out, got three flat-bottom boats and started doing rescues with people and their pets.” 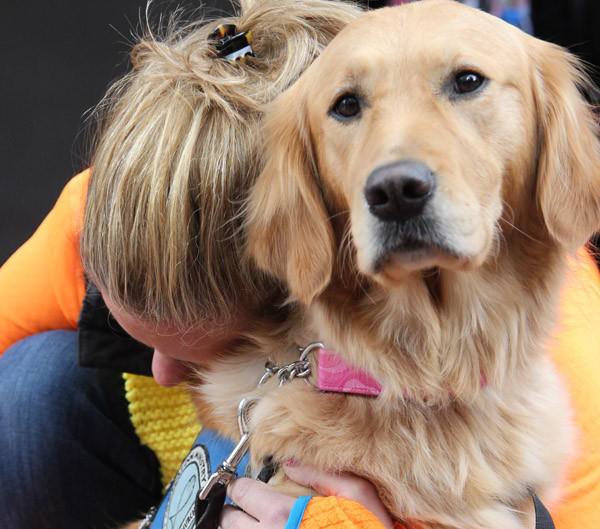 “When the marathon bombings occurred, we talked to pastor Dutzmann and said, ‘Would you like to have the dogs?’ And we were on the plane the next day.”

Dutzmann said the dogs added another dimension to the help he could offer the people who turned to the church following the bombings: “Yes we’re open, yes we have bathrooms and coffee, yes of course I will pray with you, but what happens is, the dogs quiet people down.”

“Everybody’s on edge,” he said, and people come over to the dogs “with tears in their eyes,” thankful that they are there.

The dogs spent hours on Saturday comforting anyone looking for a furry hug, a kiss or just looking to spend quiet time together. They will continue to do so for days to come.

Before she left to pick up her race bib, Rodeghiero noted that it was her own dogs and these dogs that helped her through the last year and get to the starting line once more.

She added, “Had I not had them, I’m not sure how I’d fare. This is just love in a golden body.”

Stacey Leasca is a former social media editor at the Los Angeles Times.