Story So Far: Who was Freddie Gray, and what’s next for the police officers charged in his death?

The unrest in Baltimore after the death of Freddie Gray left portions of the city in ruins and again elevated the national debate over police treatment of African Americans.

Protests raged in Baltimore, Chicago, New York, Philadelphia and Ferguson, Mo., in the two weeks after Gray died from a partially severed spine in police custody. The six officers involved in Gray's April 12 arrest were charged May 1 with a host of offenses, ranging from second-degree murder to assault. They were indicted May 21.

News accounts initially focused on Gray's arrest and what police did before and after he suffered a severe spinal injury. But with the case shifting to a courtroom, legal analysts are now trying to weigh how the decision to try all six officers separately will affect the chances of conviction.

Here is some background on Gray and a preview of the impending court battle.

‘He was so funny’

Gray was a 25-year-old resident of Sandtown-Winchester/Harlem Park in West Baltimore. He was 5-feet-8 and 145 pounds, and was a graduate of Carver Vocational-Technical High School.

Around his neighborhood, friends often referred to him by his nickname, Pepper.

"He was so funny. Any time you're looking for a laugh, you're going straight to Freddie," Raheem Gaither, a friend and neighbor of Gray's, told the Baltimore Sun. "We're all from the same neighborhood. All of us here are family."

Gray also sang in the youth choir at his church, enjoyed fashion and played for a neighborhood football team, according to a program from his funeral.

He had a twin sister, Fredericka, who soon after her brother’s death said that he “would not want this,” referring to the rioting that roiled their city. He also had an older sister, Carolina.

A man walks along a street last spring in the Baltimore neighborhood where Freddie Gray lived. (David Goldman/Associated Press)

‘I'm not saying Fred was an angel’

Gray had been arrested more than a dozen times since he turned 18, according to court records. Many of the cases involved the possession and distribution of narcotics. When he was arrested, Gray had two drug cases pending. One was a felony on suspicion of selling heroin. Other charges against Gray included trespassing and shoplifting.

"I'm not saying Fred was an angel; whatever he did is now in the past. But the police already have made up their minds about who we are," Rudolph Jackson, 51, told the Sun. "They figure every black person with their pants hanging down is a suspect, and they stop them without probable cause."

Unemployment in Sandtown-Winchester/Harlem Park among those aged 16 to 64 was 52% in 2012, according to a Justice Policy Institute report. The median household income in 2010 was $22,000, compared with $37,000 for Baltimore overall, according to a 2011 Baltimore City Health Department report.

Mixed in with drugs and dismal school systems, poverty is an epidemic that plagues inner-city black neighborhoods nationwide.

In Gray’s neighborhood, young blacks are nearly as likely to be arrested as they are to finish high school, according to the Health Department report. One of every four juveniles was arrested between 2005 and 2009, nearly double the rate in the rest of the city.

How did he die?

Gray died from an injury that partially severed his spine, according to an autopsy report. There were no indications of force or bruising, police said, and they do not know when or how his spine was severed. He died April 19, a week after his arrest. Baltimore’s police union asserted that none of the officers did anything criminal, and has warned against a rush to judgment.

What happened to the police officers involved in Gray's arrest?

On May 1, Baltimore State's Atty. Marilyn J. Mosby said the officers involved in the arrest would be criminally charged. Caesar R. Goodson Jr., the driver of the van, was charged with second-degree "depraved heart" murder. Three other officers face involuntary manslaughter charges, and two more were charged with assault.

Days after Mosby charged the officers, Baltimore Mayor Stephanie Rawlings-Blake lifted a 10 p.m. curfew that had been in place for six days following unrest in the city.

On May 21, Mosby announced a grand jury had indicted the six city police officers. The charges ranged from "depraved heart" murder to assault.

The Justice Department has also opened an investigation into Gray’s death. 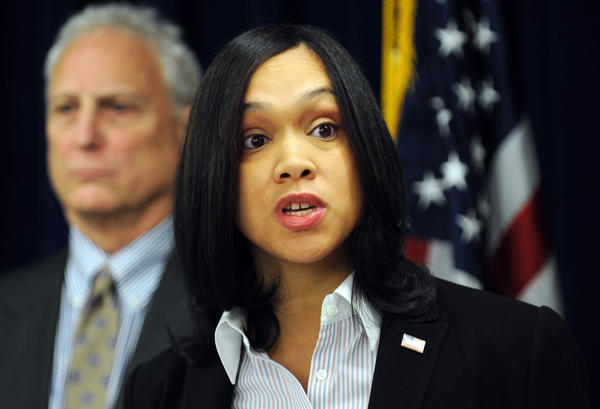 How will the officers be tried?

After Mosby brought charges in May, attorneys for the accused officers filed a host of motions calling for a change of venue and an immediate dismissal of charges. They even asked a judge to task another prosecutor's office with trying the officers.

The officers' attorneys have contended that remarks delivered by Mosby after she announced charges May 1 were inflammatory, and that her intent was to bias a jury against the officers.

Judge Barry Williams rejected nearly all of those motions Sept. 5, but he did grant defense requests to try all six officers separately.

Legal analysts believe Williams' decision could both hinder and help prosecutors. Although it gives attorneys for all but the first of the six defendants ample time to review testimony delivered by prosecution witnesses and hammer out any inconsistencies, it also gives Mosby's staffers a chance to retool their approach with each separate prosecution.

"If the state loses one case and they figure out the weaknesses, they could patch up the holes," Thomas Maronick, a prominent Baltimore defense attorney, told the Baltimore Sun.

Sept. 10, 5:02 p.m.: This article was updated with information about the six officers' pending criminal trials.

May 21, 3:56 p.m.: This article was updated with the information that the six police officers were indicted.

May 5, 10:53 a.m.: This article was updated with more information on the officers charged in Freddie Gray's death.

May 1, 10:38 a.m.: This article was updated with the news that the officers involved in Freddie Gray's death were criminally charged.