At least 17 people across the central and southern U.S. are dead from destructive tornadoes that ripped through the region.

The worst tornado outbreak of the year struck several small towns across the central U.S. on Sunday, killing at least 17 people, damaging or destroying scores of homes and businesses and sparking a search effort in Arkansas that continued into the night.

Arkansas Gov. Mike Beebe’s office confirmed that at least 16 people were killed when twisters struck near Little Rock. Another person was confirmed dead in Quapaw, Okla. Nearby Baxter Springs, Kan., was heavily damaged.

Smaller tornadoes were reported in Nebraska, Illinois, Missouri and Mississippi, but it was in central Arkansas where the some of the most dramatic rescue scenes were playing out. A tornado -- or a series of tornadoes -- appeared to scour a path dozens of miles long and possibly up to three-quarters of a mile wide.

Officials said the twister crossed Interstate 40, a crucial trucking artery out of Little Rock, while drivers were still on the road, then thrashed the town of Mayflower before continuing northeast to Vilonia and beyond. The National Weather Service reported that Arkansas Game and Fish Commission headquarters east of Mayflower had been destroyed.

“It’s very, very, very bad,” one official radioed on an emergency channel while driving down I-40, reporting a ghastly scene of flattened tractor-trailers and flipped cars. “People are in stretchers.”

When a reporter called the Faulkner County Sheriff’s Office to ask about the tornado damage, an official redirected the call to a 911 dispatcher, who said, “I have to help people!” and hung up.

“We’ve got a lot of injuries and a lot of searching is still going on right now, door to door,” said Matt DeCample of the governor’s office. “A lot of people [were] in vehicles thrown around the road, a lot of homes and businesses completely wiped out.”

He added: “It’s all hands on deck. When daybreak comes, we’ll have a better assessment of what’s going on.”

Twisters struck Baxter Springs, Kan., and Quapaw, Okla., separated by six miles and a state border. Quapaw’s fire station was destroyed, officials said, and the north side of town was damaged.

Scott Fernandez, 38, an amateur storm chaser from Detroit, said he was watching from about a mile away when the funnel cloud descended and struck Baxter Springs.

“Once we got in there, there was a lot of debris across the main road -- the damage path had come from south to north, going northeast,” Fernandez said.

He said he saw one house with a tree on top. “The family was outside,” Fernandez recalled. “One of the girls had a cut on her leg -- the mother had five kids, and their dog -- and they were all sitting in the living room of that house when the sirens went on, and then the tree fell on their house. ... It was a miracle they had all survived that, because it was pretty well destroyed.”

In Baxter Springs, 60 to 70 homes and 20 to 25 businesses were destroyed, according to the Kansas Division of Emergency Management.

In Hammond, Kan., a grain elevator was blown onto a rail line, where it derailed eight train cars, according to the state emergency management division, adding that six homes there were also damaged.

Emergency spokeswoman Jane Welch said she didn’t have any information on whether there had been injuries in the storms.

Nor did she have information, on what the train in Hammond was carrying, though local officials said the situation was manageable enough that they didn’t need assistance. To be honest, Welch said, “our focus is on search and rescue from the tornado.” 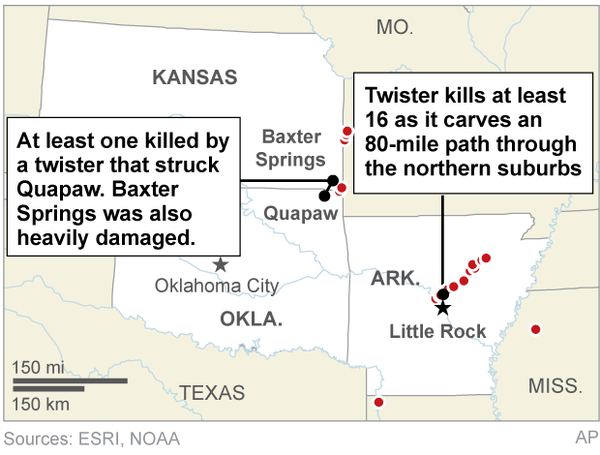