Washington wildfire destroys dozens of homes; fireworks are banned nearby

The blaze started Sunday outside Wenatchee, about 150 miles east of Seattle, and had grown dramatically by the end of the day after embers blew on top of a recycling plant and several warehouses that contained chemicals, officials said. As of Wednesday evening, the blaze was 47% contained.

The damage to dozens of buildings has left residents heartbroken, even if their own homes had been spared.

"It's a mix of emotions -- blessed and guilty," said Desiree Schmidt, seated under a tent near a home that had burned to the ground. "I can go to my refrigerator and shower. We have 28 friends and neighbors who can't."

It's not clear how the fire started

”More than likely, it’s a human cause,” said Rich Magnussen of the sheriff’s office. “It’s still a very active investigation at this point.” 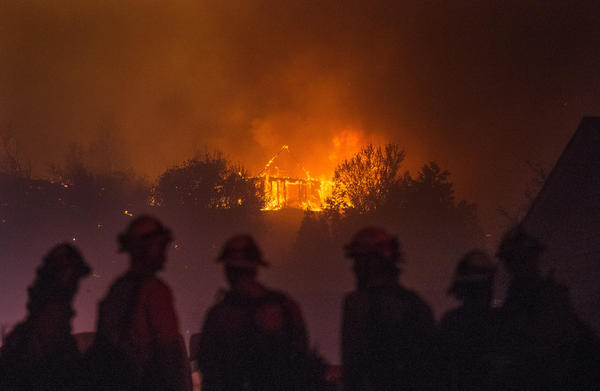 The initial blaze, which began outside the town of Monitor, Wash., created a second and more powerful fire when embers blew onto the roof of a recycling plant in Wenatchee, Mckellar said. The fire quickly spread to a pair of nearby fruit-packing warehouses and another building that housed a large amount of paper, Mckellar said.

The fruit-packing warehouses contained drums of ammonia, according to Mckellar, who said the fire quickly gained intensity Sunday.

Mckellar said another building was part of an orchard supply business, and contained fertilizers and other agricultural chemicals. Among those chemicals was methyl bromide, KING-TV reported, a highly toxic chemical commonly used in pesticides that can cause irritation to the lungs and eyes and neurological effects.

Officials told reporters Wednesday that a cleanup effort was underway, and that crews had dumped a large amount of sand around the area to help contain the spill.

The fire has destroyed nearly 30 homes in Wenatchee, plus several industrial structures. The damage to the warehouses also caused an ammonia leak Monday, prompting city officials to issue a shelter-in-place order while the chemical spill was contained, Mckellar said.

No one had been hurt as of Tuesday morning, Mckellar said. At least 1,000 people who live near the fire had been ordered to evacuate the area. Not all of them complied, but 155 people checked into a nearby Red Cross shelter Sunday.

By Wednesday morning, all mandatory evacuations had been lifted in the area, but residents were told to remain alert.

Some Wenatchee residents lost everything 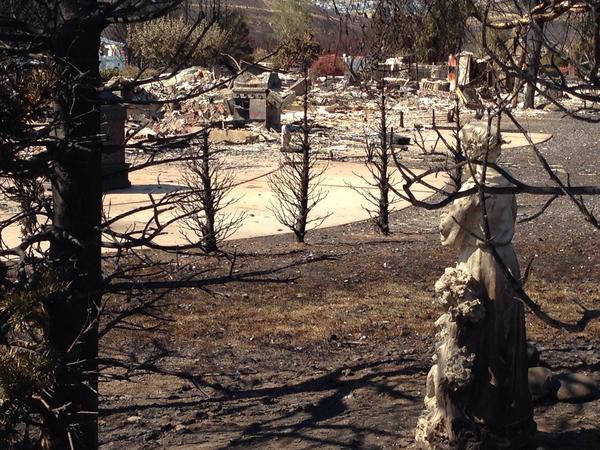 A statue of St. Francis is nearly all that remains outside the wreckage of Cindy Dominguez's home in Wenatchee, Wash. (Maria L. La Ganga / Los Angeles Times)

Behind the wreckage of Cindy Dominguez's home stood a clean, white statue of St. Francis, shrouded by blackened trees. The statue was one of the only things she owned that survived the fire.

A charred swing stood where a porch used to be. The house burned down around the metal box that formed Dominguez's fireplace. It remains, scorched and lonely in the rubble.

"It's devastating and heartbreaking all at once," Dominguez said as she sipped a bottle of water and surveyed the damage. "I have to find my wedding ring. I had it in a drawer. I should have had it in the fire lockbox. It was the only thing that would withstand the fire, and we took it with us. Duh."

Conditions continue to favor the fire

By Wednesday morning, firefighters had managed 47% containment of the blaze, up from 10% the day before.

Strong winds from the west and high temperatures helped drive the fire Sunday, and forecasts indicate the mercury could stay above triple digits for the rest of the week. According to the National Weather Service, temperatures around Wenatchee could reach a high of 103 degrees Thursday, and highs are expected to top 100 degrees Friday and Saturday.

Despite the troublesome weather, Wenatchee's 31,000 residents were "no longer in imminent danger" on Tuesday afternoon, according to Joe Anderson, a spokesman for the U.S. Forest Service. He said the fire was unlikely to advance any further.

Fireworks banned ahead of the holiday weekend

With their eye on the hazardous fire conditions, officials have banned fireworks and open burns in Chelan and Douglas counties.

Although it’s still legal for residents to buy fireworks at local stands, Wenatchee Mayor Frank Kuntz said, authorities will be out in force during the holiday to crack down.

”We don’t want to have any careless activities causing additional fires for us,” said Chelan County Fire Chief Mike Burnett, adding that firefighters, many of them volunteers, are exhausted after working around the clock to battle the fire. “Just give us a break, please.”

July 1, 8:43 p.m.: This story was updated with current weather and fire-containment figures.

July 1, 11:03 a.m.: This story was updated with information about the fireworks ban and additional details.

June 30, 6:09 p.m.: This story was updated with comments from Wenatchee residents who lost their homes.