SACRAMENTO -- Nearly 20 years ago, when California was reeling from recession and aboil over immigration, voters passed Proposition 187, a punitive measure that sought to deny public services such as education and healthcare to those living in the state illegally.

It was the electoral equivalent of a shout from the rooftops: nearly 8 in 10 of those who voted in favor said they wanted to send a protest message and half said they wanted to force Washington to respond to the problem of illegal immigration and its burden on the state.

The initiative also served, not incidentally, as a lifeline to the state’s struggling governor, Republican Pete Wilson, who won easy reelection the same day voters expressed their belief, by an overwhelming margin, that California was headed in the wrong direction. That sour sentiment is typically a death knell for an incumbent.

In terms of issues, illegal immigration was cited by voters as their topmost concern, and those who felt that way sided with Wilson over Democrat Kathleen Brown by nearly 2 to 1.

The campaign around Proposition 187 was a bruising one, starkly dividing the state. The measure split Californians by age, education level and religious affiliation, according to exit poll interviews, as well as partisan lines. Republicans voted more than 3-to-1 in favor, Democrats 2-to-1 against. Whites were strongly supportive. Latinos were overwhelming opposed.

It was, in retrospect, a pivot point, an election that not only changed California but helped reshape politics nationwide. Proposition 187 was largely voided in the courts, but not before energizing the burgeoning ranks of Latino voters and badly damaging the image of the Republican Party, throughout California and across the country.

The practical results can be seen here in Sacramento, where Latinos have nearly doubled their numbers in the state Legislature.

More substantively, Gov. Jerry Brown has just signed into law a suite of measures -- expanding access to drivers’ licenses for immigrants in California illegally, criminalizing threats of deportation to intimidate employees, frustrating efforts to deputize local police as federal immigration officers -- that elicited scarcely a peep outside a dwindling band of hard-liners.

For much of its history, California was a Republican bastion, producing both electoral votes and national leaders such as Hiram Johnson and Earl Warren, who ensured, along with Presidents Nixon and Reagan, that the Grand Old Party was inextricably linked to the great Golden State.

Over the last two decades, however, California has become something altogether different: a Democratic stronghold in presidential politics, a party fortress in Congress and the Legislature, and a dead zone for any Republican with statewide ambitions. 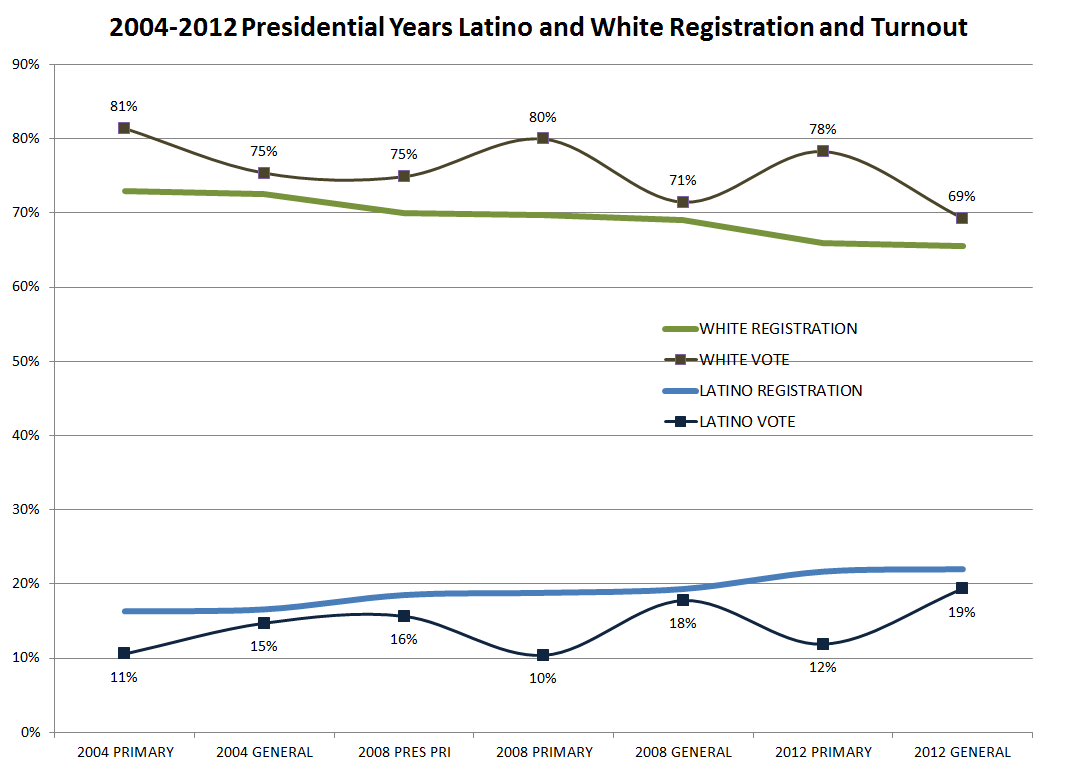 The dramatic increase in the Latino vote and the community’s alienation from the GOP has been instrumental in that shift, which shows no signs of reversing any time soon.

In many ways, trend-setting California is again leading the country, offering a glimpse of where America might be headed in the years and decades to come, barring a successful GOP makeover. The rise of Latino power that began in response to Proposition 187 has spread eastward -- to Nevada, Colorado and Texas, among other states -- which explains the GOP’s near-panic after Republican presidential hopeful Mitt Romney’s dismal 2012 performance with those voters.

The California electorate “is much less white, less religious, much less straight and much less old,” than it was even a decade ago, observed Dan Schnur, a former GOP strategist who directs the Jesse M. Unruh Institute of Politics at USC. The same thing is happening across the country and, Schnur noted, “Every single one of those demographic trends works against a Republican Party that has not adjusted its approach or agenda over the last several years.”

In California, voter turnout illustrates the phenomenon. In November 1994, when Proposition 187 passed, Latinos were about 10% of the statewide electorate. In November 2012, that number had increased to nearly 20%.

Latinos tend to be younger, they and have long failed to vote in numbers commensurate with their share of the population. But even so, by 2040 they are projected to make up just under a third of the California electorate.

In the still-tense days after the 1994 election there was calculation among foes of Proposition 187 and a rallying cry that ultimately proved prophetic.

“We lost the battle, but we need to win the war,” said Father Pedro Villarroya, then-head of Hispanic ministry for the Los Angeles Archdiocese of the Catholic Church. “We need to vote.”

Mark Z. Barabak is a political columnist for the Los Angeles Times, focusing on California and the West. A reporter for nearly 45 years, Barabak has covered campaigns and elections in 49 of the 50 states, including a dozen presidential campaigns and scores of mayoral, gubernatorial, congressional and U.S. Senate contests. He also reported from the White House and Capitol Hill during the George H.W. Bush and Clinton administrations.