Vehicles rejected by insurance companies in the U.S. and Europe gain a certain mystique in used-car lots, their musty interiors revealing vestiges of the past.">

Mohammad Azizi, 23, left, bought a used 2010 Toyota Corolla several months ago. The car, which came from Canada, will be getting new seat covers, he said. (Carolyn Cole / Los Angeles Times)

Vehicles rejected by insurance companies in the U.S. and Europe gain a certain mystique in used-car lots, their musty interiors revealing vestiges of the past.

They sit in the sun harboring their lost histories, their forgotten dreams, their traces of funerals, graduations and stolen kisses. On dusty windshields, insurance stickers from Travelers and State Farm bear witness to wrecks in "Metro DC," "Hardin, Texas," and "North Hollywood," some with bright orange "total loss" decals.

For their former owners, that was it, nothing left but a story to recount of a corner rounded too quickly, a red light run, one too many drinks for the road.

But here on the highway to Iran, thousands of used cars from America and Western Europe begin a second life.

Afghanistan doesn't manufacture its own cars, or much else, so most vehicles sold here are "pre-owned" (and many pre-crashed — but with barely a dent thanks to deft repair work by local body shops).

Most begin their journey by ship to a new world of unpaved roads, kidnappers and Islamist militants after being auctioned to middlemen by U.S. or European insurers. The vehicles land in Dubai or other ports and are then transferred onto other ships bound for Pakistan or — after being resold to circumvent U.S. and European sanctions — Iran.

The final leg of their trip to this "graveyard of empires" (and Toyota Corollas) is via transport truck.

American brands don't sell as well as Japanese and are hard to find parts for, said Abdullah, a salesman with Herat's Tamin Ansar Autos who, like many Afghans, uses only one name. "I know one guy who sells Fords," he said. "He sold them very cheap. They use too much gas." 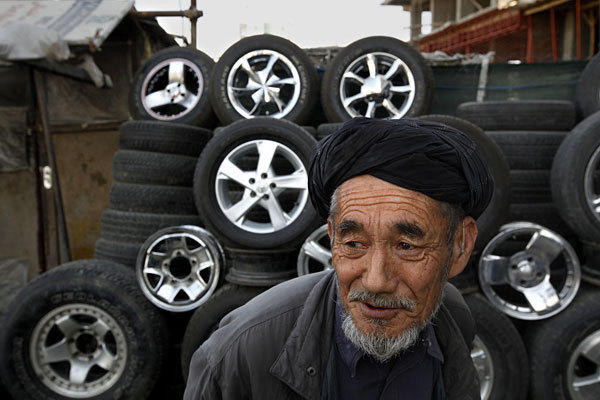 In Kabul, 70-year-old Alambiq works fixing tires and hubcaps. He has never owned a car, but says he would choose an American model if he could. (Carolyn Cole, Los Angeles Times)

Dealers in this Muslim country are careful to remove such potentially offensive hitchhikers as liquor bottles and pork-sandwich wrappers. "No one worries if 'infidels' drove them, as long as they're cleaned," said car-lot owner Abdul Aziz, 35.

Some lots sport frayed colored flags and one has a rusting model airplane out front, but there isn't much devoted to marketing, as evidenced by dealers who apparently see insurance "collision" stickers as a point of pride.

"I think Germans and Swiss must be better drivers, neater, more law abiding," Aziz said as a chicken strutted past. "Americans have that cowboy history."

Used-car importing became a lucrative business after Taliban rule ended in late 2001. But uncertainty tied to the departure of foreign combat troops in 2014 is now hurting the Afghan economy.

On a recent Friday, normally the week's busiest shopping day, a handful of shoppers browsed the half-mile strip of 30 or so used-car lots lining both sides of the road a few miles west of Herat. 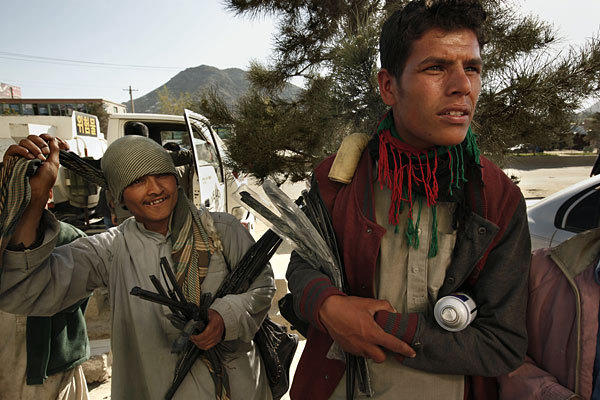 "We have nothing but time," said Aziz, watching as his 3-year-old son, Omar, and friend Kaihan, 8, took one of his cars for a spin. Kaihan sat atop a booster on the driver's seat, and Aziz said Omar also sometimes took the wheel. Sure, he said, the kids are too young for driver's licenses, but they stay inside the lot and have never had an accident.

Three years ago, customers snapped up two or three of the road warriors a day, dealers say. Now two weeks can pass without a sale.

Sangin, 40, said he's lucky to clear $50 a month as both salesman and security guard, compared with $200 a couple of years back.

"People are worried about the future," he said, standing near a Toyota 4Runner bearing Virginia safety stickers splattered with bird poop. "They're just not spending."

Amid a sea of Corollas sit a few used trucks, Korean ambulances and high-end SUVs. "I don't deal with warlord customers," Abdullah said. "Besides, most don't buy used cars. Armored vehicles are specially ordered." Toyota Land Cruisers and Lexus are the models of choice, with most "hardened" in Dubai, United Arab Emirates.

Shams, 33, pulled into the Baharan Jadid Auto Co. lot on a dented motorbike and looked over a Suzuki sedan without air conditioning for $3,000 as salesman Rahmatullah popped open a hood to reveal a dust-caked engine. Shams then considered a nearby air-chilled sedan for $500 more.

"The price is negotiable," Rahmatullah added plaintively as Shams headed to the next lot.

Despite the economic turndown, traffic jams in Kabul and Herat have become world class. The rare traffic signals are all but ignored in a driving culture that dictates going as fast as possible, zigzagging in and out of oncoming traffic and beeping the horn incessantly while ignoring demoralized traffic policemen in ill-fitting uniforms. 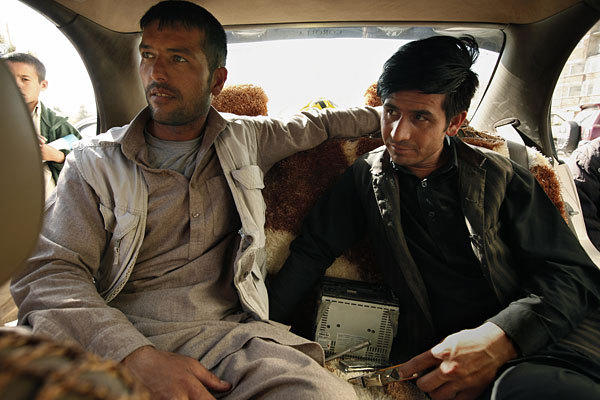 Khalid, left, 35, and Barhanuddin, 25, who own a logistics company in Kabul, bought a 1997 Toyota Corolla. (Carolyn Cole, Los Angeles Times)

In Herat's crowded Shahin market, electrician Sufiullah Herawi double-parked his 1996 Toyota Corolla DX as two workers installed a checkered strip on his doors, complementing his dashboard carpet, leather steering wheel cover and DVD player. "My friends are jealous," he said. "Whenever I add something, they copy me."

"It's good to see Afghans become more car-conscious," added Abdul Zahir, owner of a nearby accessory shop, surrounded by high-end tires and metallic-sheen rims. "And it's great for my business."

Once the Taliban took over, dealers said, used made-in-Japan cars grew more popular. After the group's ouster, regulations were imposed requiring that steering wheels be on the left side, opening the door for a torrent of imports from the U.S. and Europe.

For Anna Patterson, author of a study on Afghanistan's used-car market, there's a certain magic in the aging autos. "It feels a bit like a camel herd in medieval times, with so many stories around these vintage vehicles," she said. "It's rather romantic."

For local dealers, it's just a paycheck. "I don't know why Americans don't fix their cars after an accident and keep using them," salesman Abdullah said. "Perhaps they have so much money they don't care? Anyways, we sell 'em all."

He's got the billiards world in his pocket

A wife's Alzheimer's, a husband's obsession

Column One: The story that stays with you