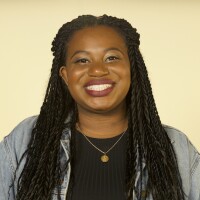 Astrid Kayembe is a rising senior studying journalism with a minor in media and social change at the University of Southern California. Kayembe specializes in long-form features and short-form documentaries about the intersection between arts, culture, and entertainment with social issues, particularly, in South Central Los Angeles, where she calls home. She has served as both a reporter and editor for USC Annenberg Media’s Intersections South L.A. vertical. In her fellowship at Refinery29, Kayembe produced the Truth Told video series with a team of journalists as a part of the Google News Initiative. When she isn’t reporting, Kayembe can be found searching for the best fried plantains in L.A. (which are probably at her mom’s house). She is honored to be a COVID-19 intern to commemorate those in California who have lost their lives due to the virus.