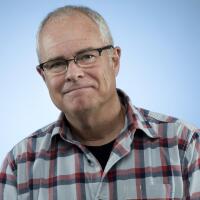 Brian van der Brug has been a staff photojournalist at the Los Angeles Times since 1997. A FAA-licensed drone pilot and videographer, Van der Brug has covered stories both international and domestic including the aftermath of war in Iraq, the Israeli withdrawal from Gaza, and the 2010 earthquake in Haiti. He was a Pulitzer Prize finalist for his images of the earthquake and tsunami disaster in Japan. Pictures of the Year International, National Press Photographers Assn., Society for News Design, Scripps Howard Foundation, the American Society of News Editors, Los Angeles Press Club and the Press Photographers of Greater Los Angeles have also recognized his work. A native Angeleno, Van der Brug was raised in San Pedro and enjoys hiking, mountain biking and is passionate about any assignment that takes him outdoors. He graduated with a bachelor’s degree in journalism from Cal State Long Beach.