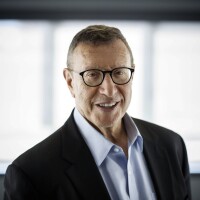 Norman Pearlstine is Executive Editor of the Los Angeles Times.

Before joining The Times in 2018, Pearlstine worked as an editor and reporter for five decades in the U.S., Asia, and Europe.

Pearlstine joined The Wall Street Journal in 1968, and he worked as a staff reporter in Dallas, Detroit and Los Angeles before becoming the Journal’s Tokyo bureau chief in 1973. In 1976, he became The Asian Wall Street Journal’s first Managing Editor, based in Hong Kong.

He left the Journal in 1978 to return to Los Angeles as Executive Editor of Forbes for the West Coast and the Pacific.

Two years later he returned to the Journal where, over the next 12 years, he worked as National Editor in New York, Editor and Publisher of The Wall Street Journal/Europe in Brussels, and then he returned to New York as Managing Editor and then Executive Editor. He also launched Smart Money magazine in 1992 and 1993 for Dow Jones & Co. and Hearst Corp.

Between 1995 and 2005 Pearlstine served as Editor in Chief of Time Warner and Time Inc. In those capacities, Pearlstine oversaw the editorial content of Time Inc.’s 154 magazines, including Entertainment Weekly, Fortune, In Style, Money, People, Real Simple, Sports Illustrated and Time. He then became a Senior Advisor to the CEO of Time Warner for a year before holding the same title at The Carlyle Group where he worked with the private equity firm’s Telecom and Media team.

Pearlstine currently serves on the board of the Committee to Protect Journalists and the Reporters Committee for Freedom of the Press steering committee. He is also a member of the American Academy of Arts and Sciences and the Council on Foreign Relations. He formerly served as Co-Chair of the USC Annenberg Center on Communication Leadership & Policy, President of The American Academy in Berlin, and on the boards of the Carnegie Corp., the Tribeca Film Institute and the Sundance Institute.

He received his B.A. from Haverford College, his L.L.B. from the University of Pennsylvania, and he did postgraduate work at the law school of Southern Methodist University.

Pearlstine is the author of “Off the Record: The Press, the Government, and the War over Anonymous Sources,” published in 2007. He is the recipient of numerous honors, including the American Society of Magazine Editors’ Hall of Fame, the Gerald Loeb Lifetime Achievement Award for Distinguished Business & Financial Journalism, and the National Press Foundation’s Editor of the Year Award.