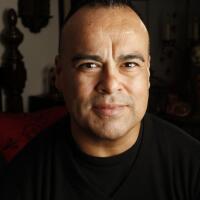 Gonzalez’s four collections of poetry include “Unpeopled Eden,” which won the Lambda Literary Award and the Lenore Marshall Prize from the Academy of American Poets. He has penned 10 works of prose, including novels, memoir, and bilingual childrens books. He has been awarded Guggenheim and NEA fellowships. Born in Bakersfield and raised by farmworkers who migrated between Mexico and the US, he now lives in New York and is a professor of English at Rutgers-Newark.