‘Bernie journeys’ and Clinton travelers: Meet the Californians who made the political pilgrimage to Vegas

Yolanda Gonzalez has just rolled into town, her car full of Bernie Sanders ephemera: lawn signs, posters and two personal souvenirs — a life-sized cardboard cutout signed on the forehead by the Vermont senator and a plastic red bullhorn also bearing his signature.

She has an hour before she needs to start canvassing for voters.

The 55-year-old grandmother and teacher has spent five decades in California, but has found herself a part-time Vegas dweller for the last two months, crisscrossing the city on her own time and dime to volunteer for this presidential campaign.

For months now, Yolanda’s been telling any Nevadan who’ll listen about the Sanders gospel.

She’s called them from cramped campaign offices and walked dozens of miles through the city’s roughest neighborhoods to knock on their doors. Her friends have called it her "Bernie journey."

Yolanda is one of hundreds of Californians who have flooded the state, arriving on planes, buses and in carpools barreling up Interstate 15 from Los Angeles.

Their experiences and backgrounds are as disparate as could be under one Democratic party banner, but they have one thing in common: Still months away from California’s June primary, these Golden State warriors have flocked to the Silver State in recent weeks, hoping to make a tangible impact on a close race next door.

It’s raining as only it can in Los Angeles: at the height of rush hour and the beginning of a road trip.

Rohan Jain is headed for Las Vegas with a mission.

“I’ve converted every single Uber driver I’ve had to Bernie,” he boasts. He’s hoping to change a few minds in Nevada too.

Rohan, who immigrated from India at age 17, says he grew up dreaming about entering politics but became disheartened by corruption. “When I found out about Bernie, I realized that there still is a little hope left out there,” he says. The car pulls up to a large apartment complex in Echo Park.

Casey Black, another self-proclaimed “Bern-er” with hip glasses and a chinstrap beard, throws his bags in the car and gets in.

In North Hollywood, they pick up Colin Black (no relation).

After introductions, the conversation turns quickly.

“If he can win Nevada, I think it’s going to be a long way toward thawing some of that trepidation from baby boomers,” says Casey. After another last-minute turn and a chorus of honks, Colin grabs Rohan’s phone to navigate.

Rohan sends up a curse in the dark car.

“Get me talking about Bernie and I will forget whether or not I am alive,” Rohan says, and makes a U-turn. 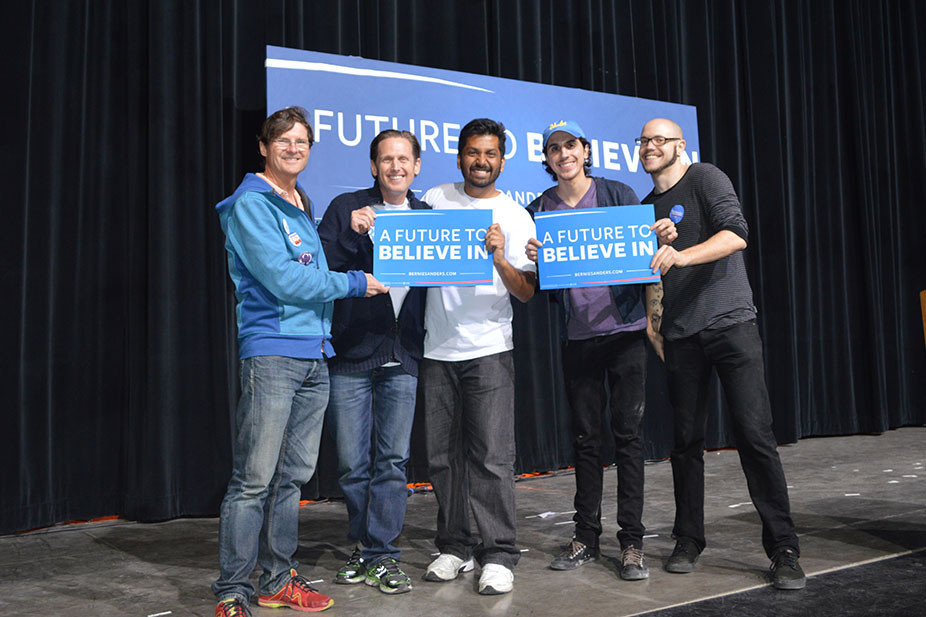 Todd Jones, 56 and a scientist at the Jet Propulsion Laboratory, opens the trunk of the SUV and peers at suitcases and backpacks stacked so high he can barely see the twenty-somethings sitting in it.

He decides they won’t all fit.

After 30 minutes and repacking the car twice, everyone else agrees.

They need to take two cars.

Todd has picked up the youngest rider, recent UCLA graduate Ferny Callejas, and the caravan stops for food.

This is the first campaign Ferny has volunteered for, and he’s been psyching himself up.

“I consider myself a socially anxious person,” he says. Before he could make his first phone call, he practiced by talking to a tube of Chapstick on his bed.

“As a parent,” says Todd, “you raise your kids, you love your kids, you’ll do anything to make life good for them. It’s that kind of feeling.” It’s his first campaign too.

The excited chatter ended hours ago, replaced first with a playlist of Sanders speeches, and then with delirious debate about socialism, dialectics and a comparison of Sanders to Nelson Mandela as the Vegas skyline unfolded before them.

Now the casino lights are dancing up and down the nearly-empty street, advertising a rap concert and all-you-can-eat buffets.

Casey glances out the window. “Man, I hate this city.” 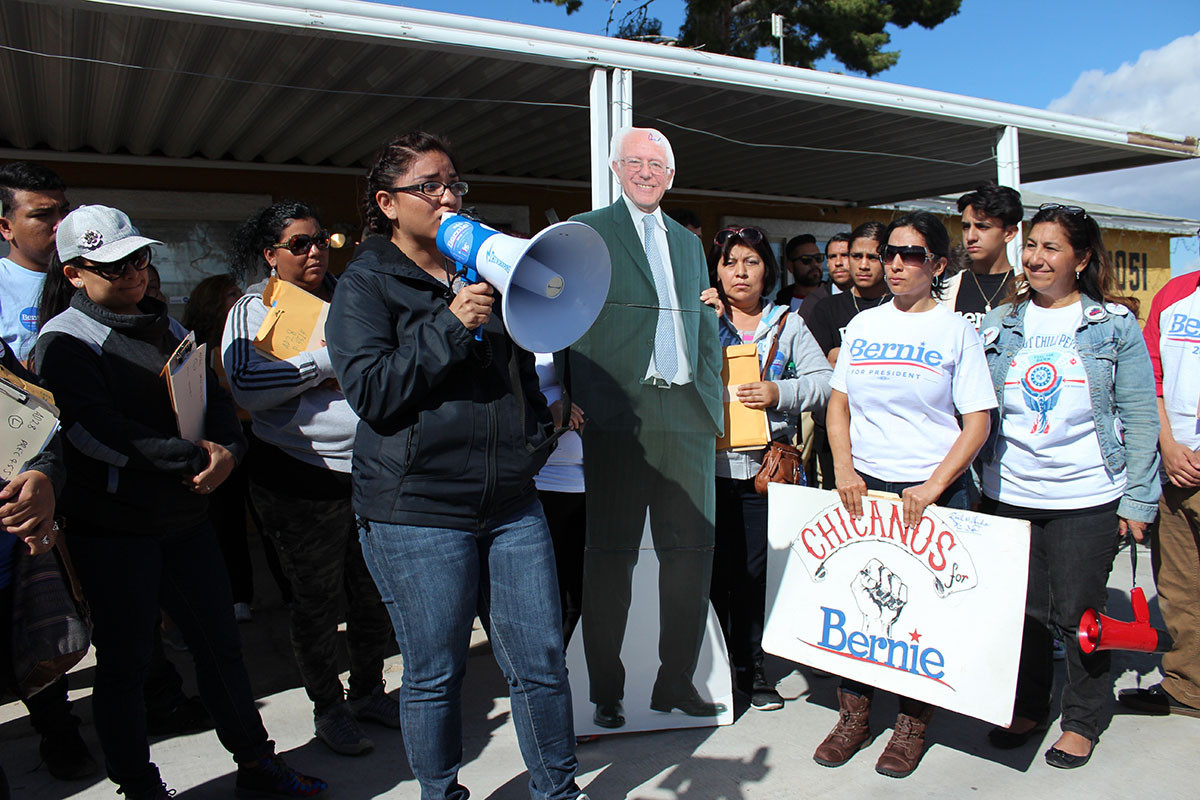 An impromptu rally has erupted for the cameras outside this Sanders field office, housed in a mustard-colored house in an area dotted by taquerias and check cashers.

It’s here that Yolanda has been focusing her energy, canvassing the city’s Latino and black neighborhoods, hoping to persuade them to turn out for Sanders. 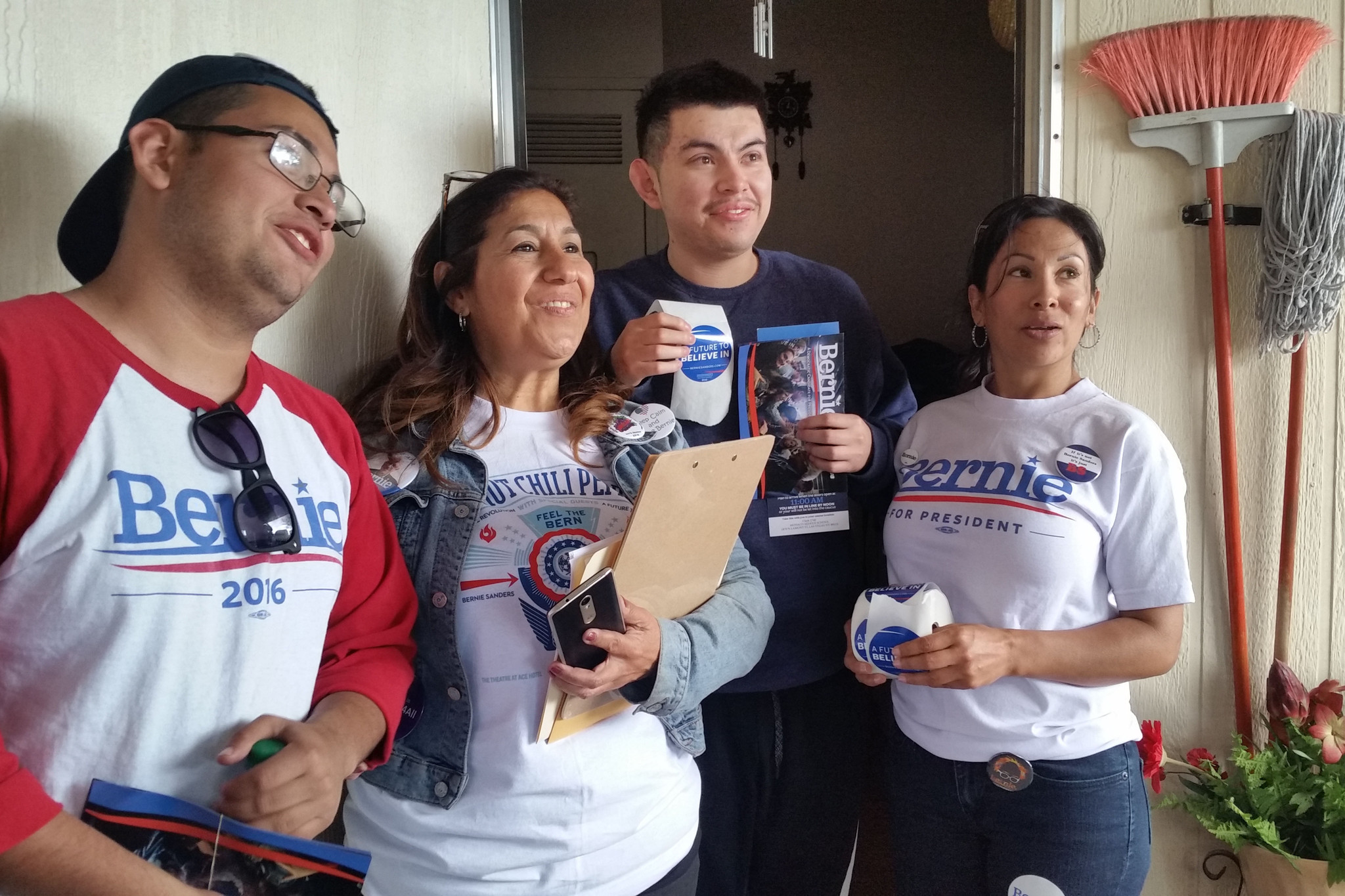 With two days left, there’s a sense of urgency in the air.

She has more energy than seems reasonable. 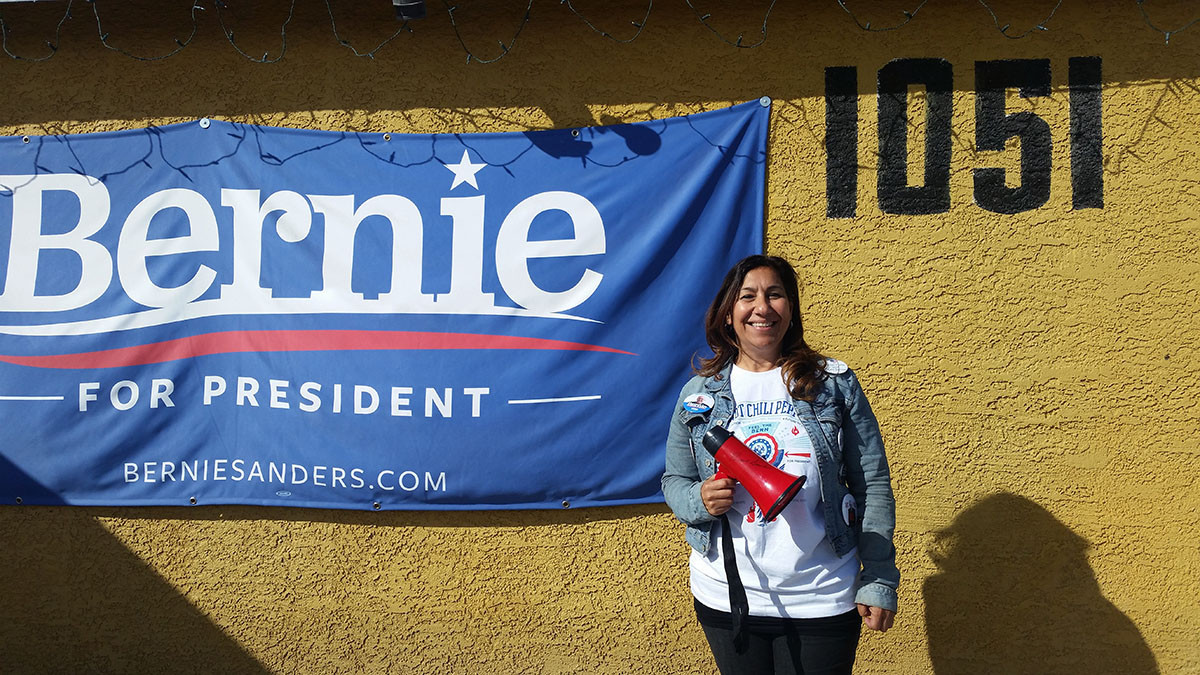 Since early January, Yolanda has spent every weekend but one in Nevada, rising at 4 a.m. on Saturdays to make the journey. She stays with a local supporter and sticks mostly to the drive-through dollar menus.

During the week, she holds phone banks and debate watch parties after work. Used to running at least five miles a day, Yolanda barely has time to sleep more than two or three hours a night now, she says.

“I’ve gained 15 pounds on this campaign.” 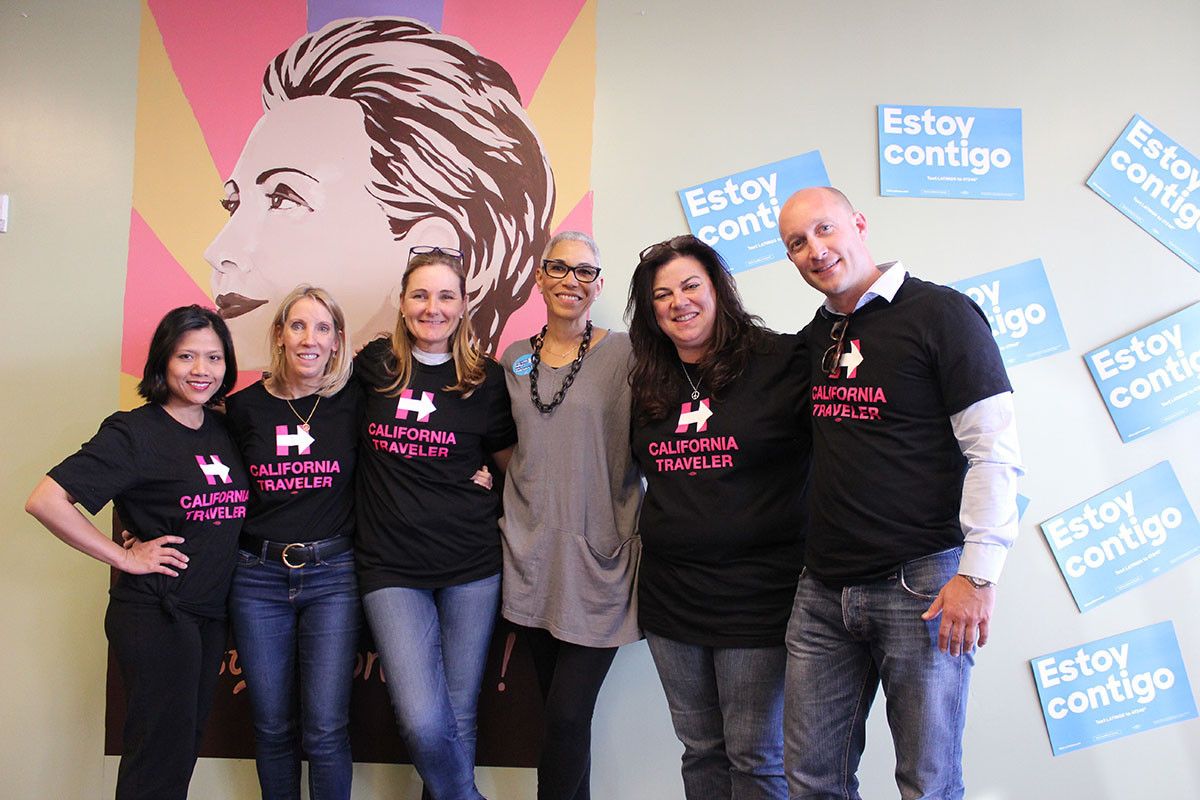 Not far away, the Hillary Clinton field office on Bonanza Road is abuzz.

Several of the volunteers are wearing matching black-and-pink shirts emblazoned with the Clinton “H” logo and “CALIFORNIA TRAVELER” on the front.

One of them is Amy Rao, a Silicon Valley executive who was called a crucial part of Clinton’s “California Dream Team” in 2008.

Rao, who recently hosted a fundraiser at her home with President Obama as the headliner, helped organize nearly 100 Bay Area volunteers to fly in and help during the last week.

Many of them are staying at the Vdara, a swanky all-suites hotel on the Strip where rooms go for $150 a night.

For the politically minded, Rao says, being in a state such as Nevada can be thrilling, what with all the rallies and TV ads that California rarely gets to witness.

In 2008, when California’s primary coincided with Super Tuesday, “It was electric, and it was exciting, and California mattered,” Rao says. “And that’s how it feels here.”

Rao stays behind when four Travelers head out for some afternoon canvassing.

At the wheel is Stacy Mason, a former newspaper editor and now executive director of the political action committee WomenCount.

Her passengers are Belinda Muñoz, who manages political and charitable affairs for a prominent Bay Area activist; Rosemary Camposano, a former tech industry public relations executive who owns a chain of blow dry salons, and Paula Pretlow, who retired from the finance world and now sits on the boards of several nonprofits.

They’ve left behind teenagers, board meetings, husbands, product launches and corporate acquisitions for the week to canvass in their tennis shoes.

Given their usual routines, it seems fitting that Stacy and her cohorts have a well-crafted system, scanning the map of assigned houses for the most efficient route. They’ve already hit 100 homes this morning, and they’re looking to do an additional 50 before the sun sets. Every couple of blocks, the van stops, doors open and house numbers are assigned. 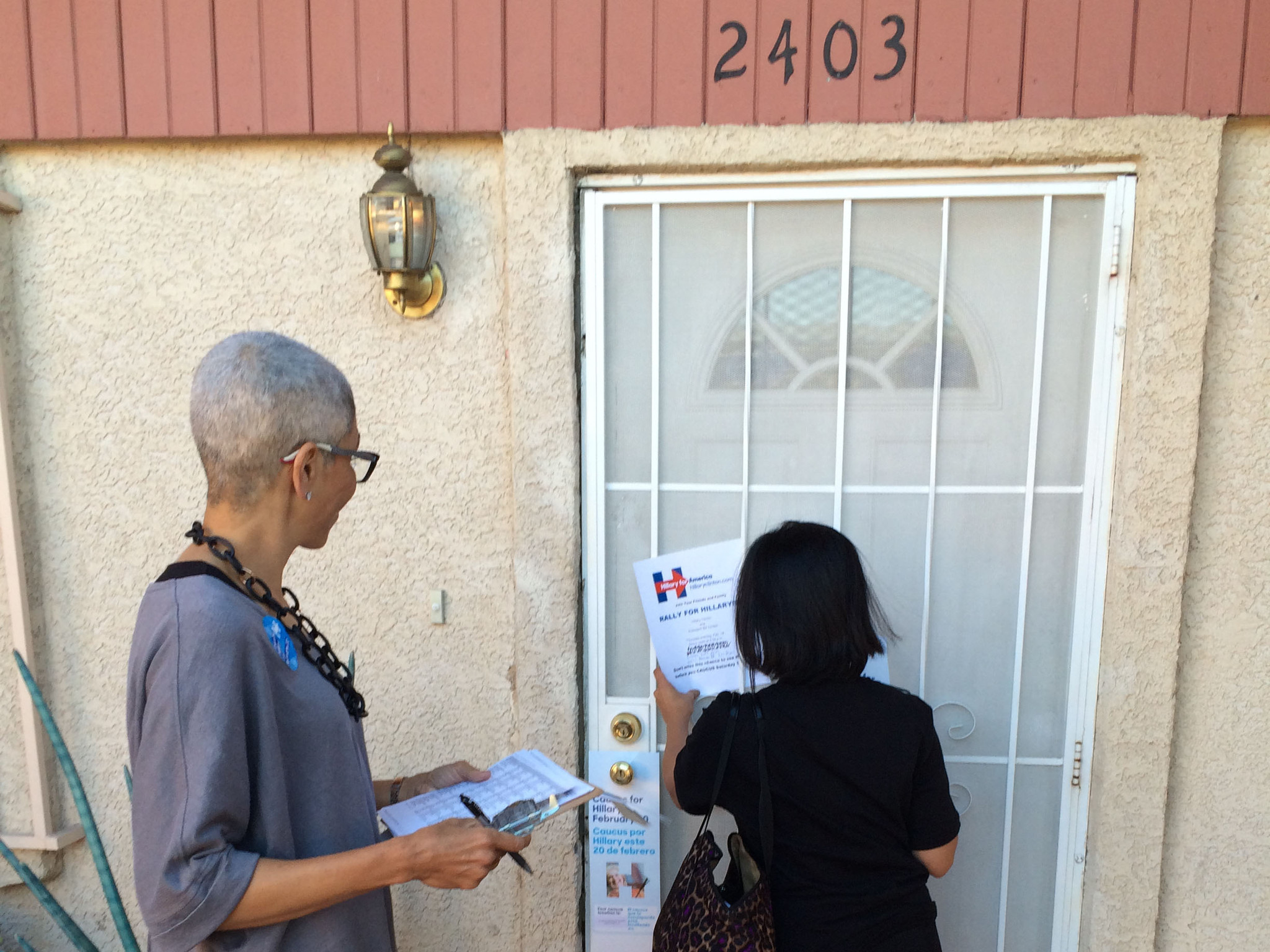 Then they regroup, Paula is recording results as they drive forward and repeat the process.

“I have to do more than put my money on the table, I have to put my feet in the street,” says Paula as the car passes Latina mothers walking their children home from school.

As they pull onto another street, Stacy gets a call. Her teenage son can’t get Uber to work on his phone, so she pauses to call a car from hers.

Most of these women met in 2008, when they traveled to half a dozen states to stump for Clinton. They’re no strangers to the ground game.

“The idea that the only contribution that I can make is financial is really off-putting,” says Rosemary. “I want to tell people about why Hillary is a better choice.” 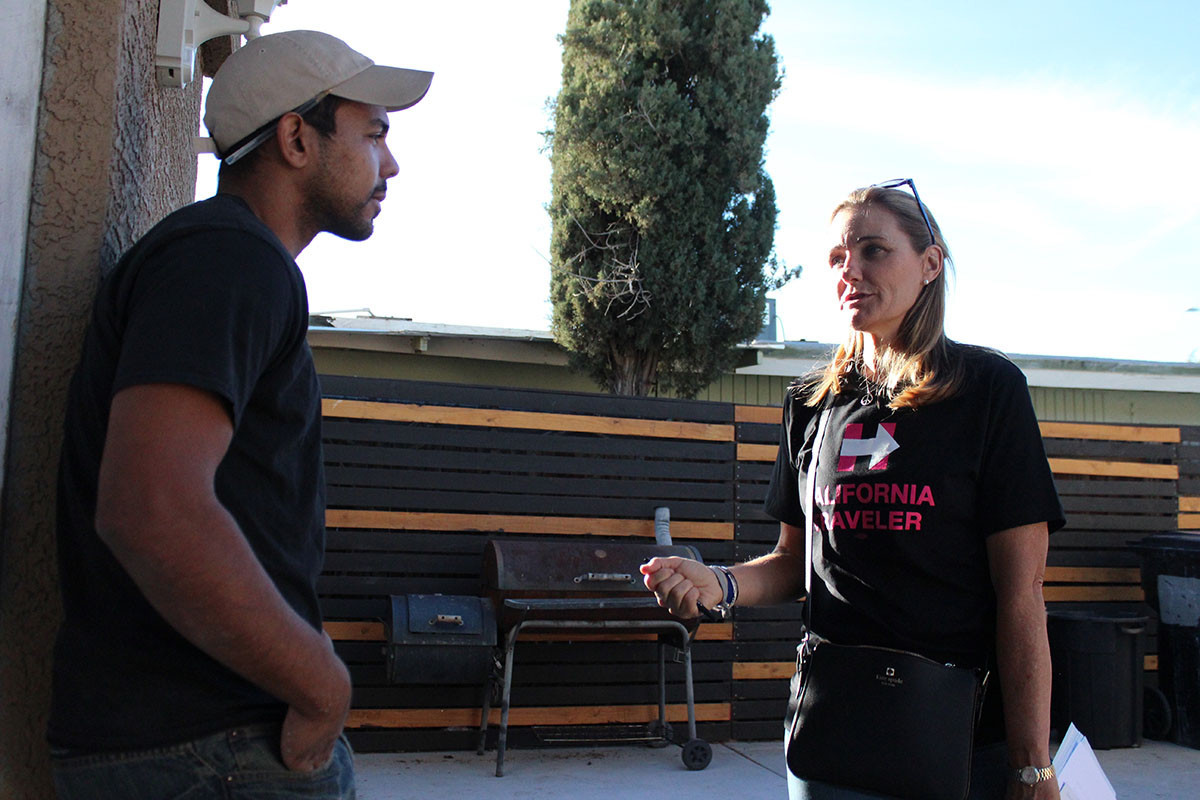 At one door, she tries to convince Juan Caba, a 35-year-old part-time bartender.

“Not sold,” he says, leaning against the stucco wall, his paint-flecked hands shoved into his jeans pockets.

“Talk to me, I know the woman personally, ask me anything,” Rosemary invites.

After a five-minute dialogue, the bartender relents. “I won’t be there Saturday,” he says. “But I will do some more research.”

With 24 hours left to go, Yolanda’s getting emotional.

“It’s just a feeling of anticipation, of sadness because it’ll also be over,” she says, wiping away tears.

She pushes on with her team, not bothering to try to convert the many Republicans they encounter.

But when Yolanda sees a gardener raking leaves, she greets him in Spanish.

“Corra la palabra – spread the word,” she urges. “Tell all your friends, all your family, tomorrow is the day to vote.”

“We haven’t believed Hillary for a long time now!” she yells to a few Bernie supporters gathered before her. She points toward a group of people already in line to register, many with Clinton stickers on. “Hillary is a Republican! She’s a wolf in sheep’s clothing!”

Soon, a caucus worker approaches and asks her to stop.

“So, I’m very passionate,” she says afterward. “This is my first caucus too.” 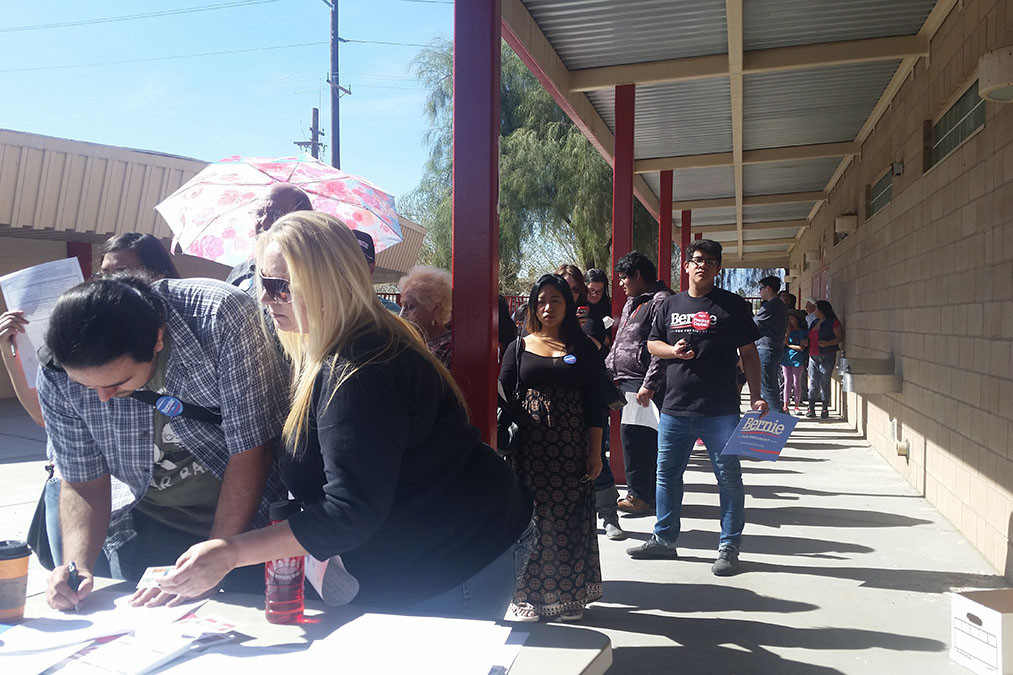 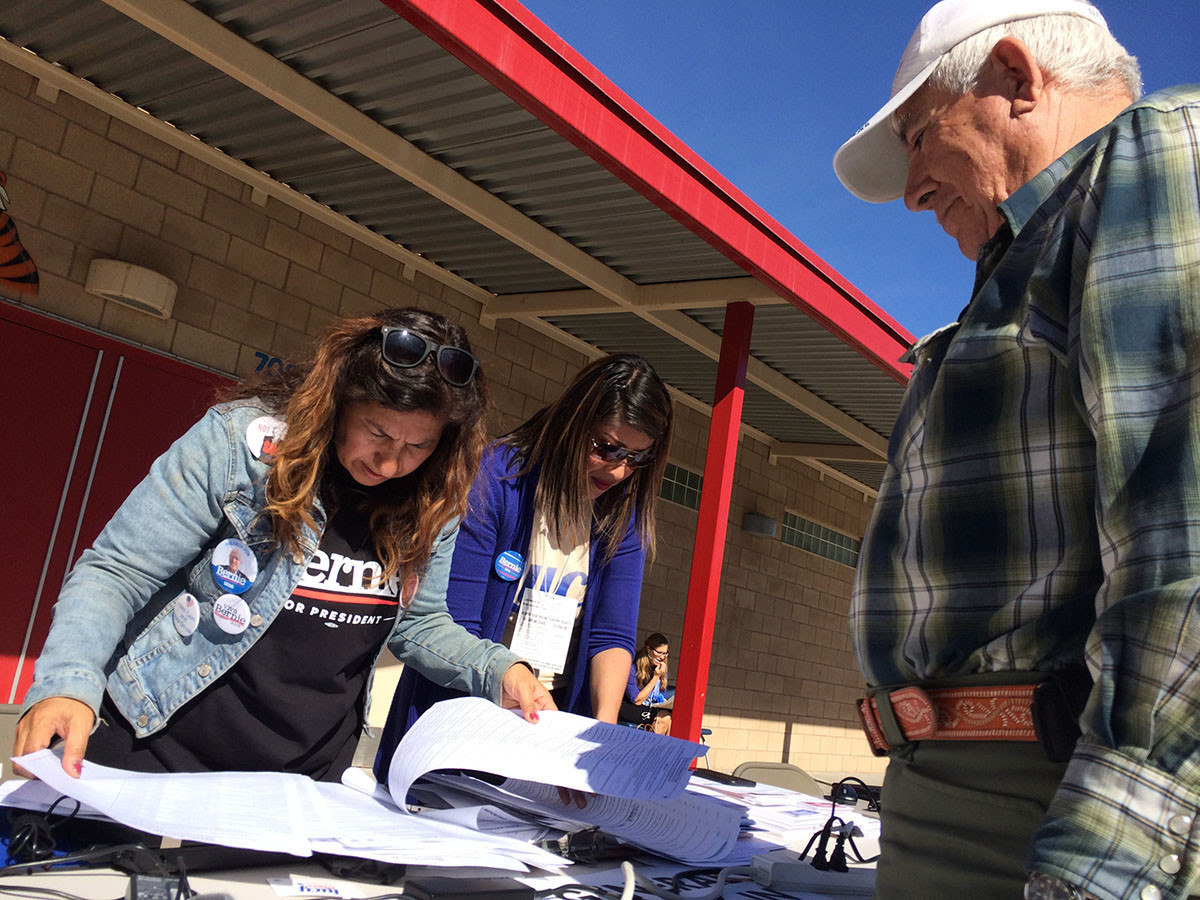 As chaos reigns and the lines grow long, Yolanda kicks into volunteer mode.

She helps direct elderly voters to an expedited line and finds them chairs to wait in. She hands out voter registration forms, translates for Spanish-speaking participants and makes signs to guide people to the right rooms.

All that remains of the morning chaos that was the Nevada caucus is a few folding tables and cardboard boxes in the courtyard. Yolanda is making sure the last materials are put away.

Ten minutes later, another caucus volunteer emerges and asks her, “Did you see the news?”

“No! What happened?” Yolanda urges, holding her breath.

“Hillary Clinton projected winner of Nevada caucuses,” he reads off his smartphone.

About 20 miles away, in a ballroom in Caesar’s Palace, the California Travelers have just erupted in cheers as Clinton is projected to carry the state.

In the southern suburb of Henderson, Rohan and his friends would soon walk to a mostly empty amphitheater that was supposed to house Sanders’ victory party.

And when the news hits Yolanda, she doesn’t speak for several seconds, fighting to hold back emotion.

“Nothing is finished until the fat lady sings ” she says quietly. After a few moments of silence, her emotions overcome her.

“I’m not giving up. I can’t,” she says, her brow wrinkling, her eyes welling with tears.

“No matter what happens, Bernie’s message has to be followed through,” she continues.

“We have to keep going. The dream doesn’t just exist in Bernie Sanders. The dream is a collective one.”

The tears are streaming down now, and she wipes them away before her voice grows stronger.

“Maybe not in my lifetime, maybe not even for the millennials, but it will occur. It has to.”

Full results from the Nevada caucuses

'We walk with Hillary': Why an L.A. congressman tells voters -- in 2 languages -- to caucus

These are the faces of the Sanders grass-roots army