How California’s delegation feels ahead of Syrian refugee vote

About 1,600 Syrian refugees have gone through the vetting process and reached the United States in recent years. More than 4 million have fled the ongoing fighting in Syria, with many going to other Middle Eastern countries such as Turkey and Jordan, or on to Europe. This week, more than half of U.S. governors said they would refuse to allow Syrian refugees to immigrate to their states, citing concerns over security following attacks last week in Paris.

House Speaker Paul D. Ryan (R-Wis.) has called for a House vote Thursday to "pause" State Department plans to increase the number of Syrian refugees from 1,680 to 10,000 or more.

Several California lawmakers are involved in drafting plans. Legislation is expected to reach the House floor as early as Thursday. The Senate hasn’t scheduled a vote to consider the topic, although discussions about what to do are ongoing.

Rep. Devin Nunes (R-Tulare), who is on a task force working on legislative changes to the refugee vetting program, said the Republican proposal mandates a new certification process for refugees coming from Syria and Iraq. While the government determines what that certification looks like, the program would be on pause.

“The vetting process doesn’t work,” Nunes said. “With or without the Democrats, I think we’re going to move forward Thursday, but we’d prefer to have the Democrats. I don’t think it’s something they’d want to vote against.”

Nunes’ staff said they’ve received several dozen calls and emails between the district office and Washington, D.C., office, with the majority supporting a suspension of admission of Syrian refugees to the U.S. Nunes said most contact with his office continues to be with people in his Central Valley district who are concerned about water amid California's drought.

Rep. Zoe Lofgren (D-San Jose) and Democrats on the Homeland Security and Intelligence committees are working on their own bill that proposes tightened vetting for refugees, but would not halt the program until the changes take effect. She wouldn’t provide more details until it is finished, and Democratic measures have close to zero chance of passing the GOP-controlled house.

“We’d like to have a collaborative effort. I think it’s a mistake to both be and look partisan at this time,” Lofgren said. “On the other hand, I can’t vote to shut the program down if it is accomplishing its goal of keeping the country safe from terrorists.”

Late Wednesday, House Minority Leader Nancy Pelosi sent a "Dear Colleague" letter urging a "no" vote on the Republican measure, saying it "slams the door on desperate mothers and children fleeing ISIS’s unspeakable violence." It was signed by other Democrats including Lofgren and California Rep. Ted Lieu of Torrance and Rep. Adam Schiff of Burbank, ranking member of the Intelligence Committee. The White House also issued a veto threat.

“We’re watching some people react based on fear and misinformation,” Becerra said. “It hasn’t had a chance to be vetted. Isn’t that what we’re trying to avoid with refugees, having people come in who haven’t been vetted?”

What is the current vetting process and does it need to change? 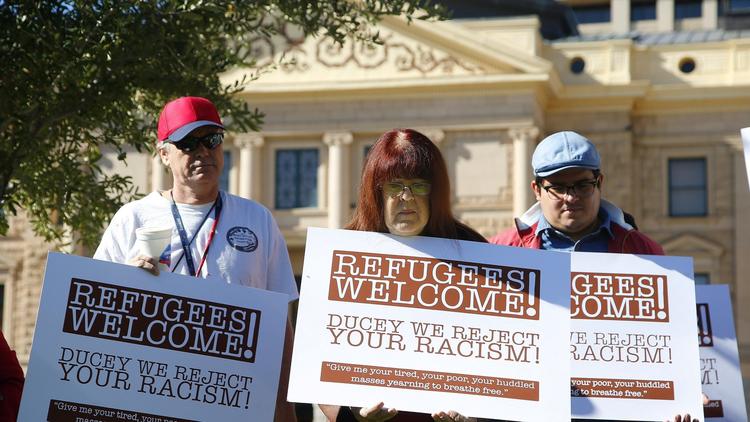 Supporters for the welcoming of Syrian refugees rally at the Arizona capitol in Phoenix on Tuesday. Arizona Gov. Doug Ducey has joined a growing number of governors calling for an immediate halt to the placement of any new refugees in the wake of terrorist attacks in Paris. The federal State Department says Arizona has received 153 Syrian refugees this year. (Ross D. Franklin / Associated Press)

The Los Angeles Times' Michael Muskal has a detailed roundup of the process that the United States uses to vet refugees.

Some Republicans point to FBI Director James Comey’s testimony before a congressional committee in late October that the United States can only vet refugee applicants against available data as a security gap. With the ongoing Syrian civil war, obtaining detailed information from the Syrian government has been difficult.

“The difficulty right now is that we do not have a history on people leaving from Syria and this is a problem unique at the moment because of ISIS and because their headquarters are in Raqqua,” Royce said.

Lofgren questioned whether the United States would want to rely on information collected by Syrian President Bashar Assad.

“If we had Assad’s records, would that actually tell us something that we want to know? Assad is a terrorist himself and the fact that we cannot get input from the dictator with blood on his hands I don’t think is a material factor.”

She said the United States pulls information from Interpol, other intelligence communities and interviews and halts the application process if there are any questions about a person’s past.

“It’s not what’s happening in Europe, where people wash up on the shore, sign their name and they are admitted,” Lofgren said. “It’s a very different situation here.”

What to do with the program doesn’t seem to fall along party lines. The Times surveyed more than half of the 53 members of the state's House delegation. Several of the state's 14 Republicans, with the exception of Rep. Jeff Denham (R-Turlock), said the program should stop until changes are made.

Denham wasn’t ready to call for a halt to the program. His San Joaquin Valley district includes one of the largest Assyrian populations in the country. California is home to 27,355 of the country’s 81,060 Assyrian residents, according to the 2014 American Community Survey.

“They are very concerned about family members that want to come back home,” he said. “We’re going to continue to talk to folks in our district about getting their families into safe harbor.”

Rep. Jackie Speier (D-Hillsborough) said she hasn’t yet heard from many constituents, but has her own concerns stemming from her work on the Intelligence Committee.

“I’m very concerned that our screening process is not robust enough and I think we’ve got to be very cautious as we move forward. I want us to be empathetic and compassionate, but I also want to make sure that our people are safe,” she said. “We have to be very careful. The one thing we know about ISIS is we have underestimated them at every step along the way, so to think that they’re not sophisticated enough to get a ‘clean’ Syrian to come over is being naive, I think.” 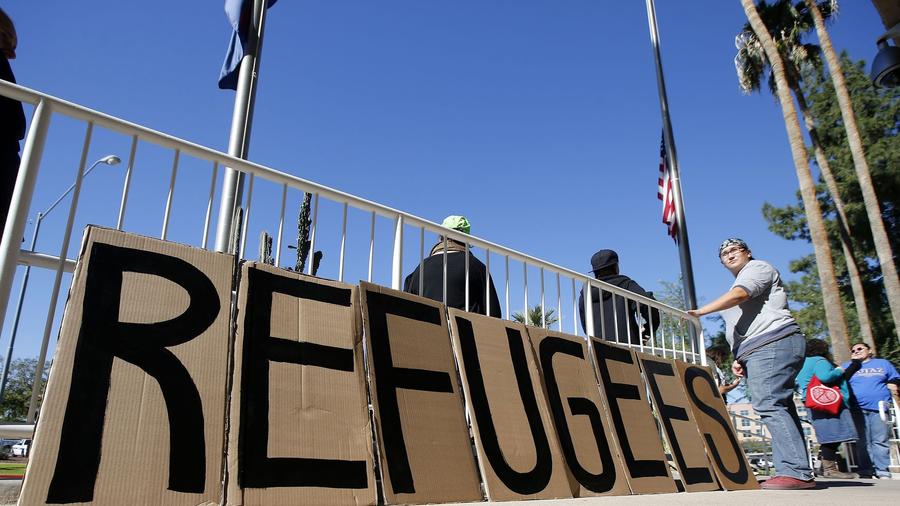 A sign welcoming Syrian refugees is placed at the entrance to the office of the Arizona governor during a rally at the Arizona capitol on Nov. 17 in Phoenix. (Ross D. Franklin / Associated Press)

Several members said constituents are worried whether the current vetting process is robust enough, but don’t want to keep Syrians from entering the United States. Other members are getting few emails or phone calls on the topic.

Rep. Barbara Lee (D-Oakland) has received an overwhelming response in support of refugees and in opposition to any religious tests, her staff said.

“Most people want to make sure that we don’t use the horrific attacks in Paris to stop doing what we do as a country,” Lee said in an interview. “These are women and children fleeing ISIS and so for the most part they don’t want that stopped, but they want to make sure, naturally, that our national security concerns are addressed.”

Rep. Eric Swalwell (D-Dublin) said his constituents also are worried about safety, but don’t want to turn people away who are vetted.

“We want to show compassion on this issue but also make sure that we show extreme carefulness in who we bring into our country,” he said. “But, we can do both.”

Rep. Ami Bera (D-Elk Grove) has had a handful of calls since the attacks, all opposed to letting Syrian refugees come into the United States, his staff said.

“I expect when I get back home next week we’ll have a lot of conversations,” Bera said, especially since he has a new opponent: Sacramento County Sheriff Scott Jones announced his candidacy this week and made clear he will run against Bera on immigration and national security matters.

Becerra said many of his constituents are the children of immigrants. They are asking whether the process is safe but are not asking to stop the refugees from entering California.

“They are not saying ‘let’s close the door on a mother who’s trying to bring her son, trying to take him away from being recruited by ISIS and could face death.’ They want to know that it’s safe, but they don’t want to close the door,” Becerra said.

Here is a tally of how the delegation ultimately voted Thursday.

Where are Syria’s refugees going?

Sarah D. Wire covers Congress for the Los Angeles Times. She’s currently president of the Regional Reporters Assn. and serves on the National Press Club Board of Governors.