San Diego’s mild-mannered mayor, Kevin Faulconer, appears destined to cruise to a second term, a notable achievement for a Republican politician who took the helm of this Democratic city just two years ago.

That means Republicans are looking at Faulconer, a former public relations executive and two-time City Council member, as someone with a strong political future within a state Republican Party in desperate need of bright spots.

The Los Angeles Times sat down with the mayor for a brief chat inside San Diego City Hall on Tuesday to discuss a variety of topics, from his political aspirations to the fate of the San Diego Chargers. 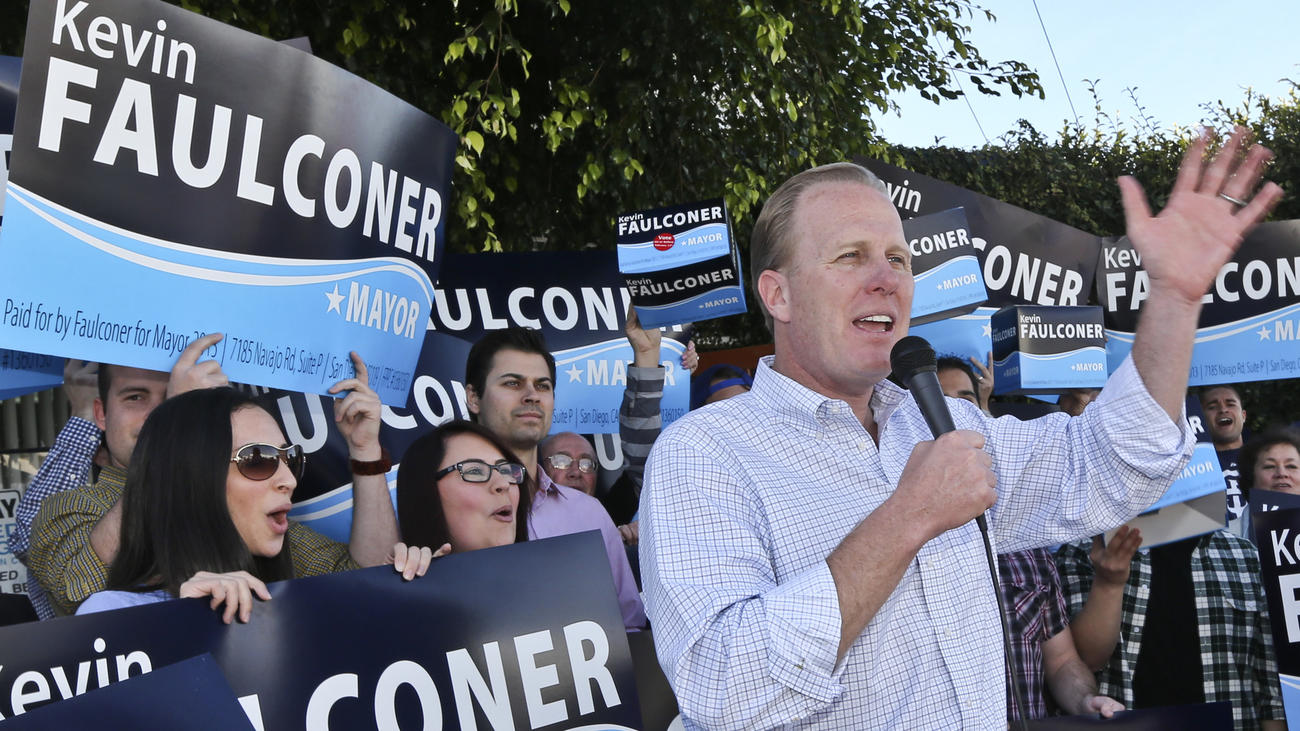 Kevin Faulconer speaks to his supporters in the final hours before the polls closed during his 2014 campaign for mayor. (Lenny Ignelzi, Associated Press)

With his reelection campaign for San Diego mayor underway, Faulconer, 49, wouldn’t bite when asked if he’s considering a run for governor in 2018. He said he’s focused on his current job as mayor, and his campaign for a second term.

Currently, his greatest challenge in the mayor’s race comes from Lori Saldaña, a former Democratic assemblywoman who just entered the race last month. She lost a bid for a San Diego congressional seat to Democrat Scott Peters in 2012.

“I’m running for mayor of San Diego. People are always putting your names in polls, and that’s part of life,” Faulconer said. “I’m very proud of what we’ve been doing here in San Diego, and the turnaround that’s happened here.… We went through some very trying times. This city was literally on the verge of bankruptcy and doing so many things wrong. And as I look at the reforms we put into place, the reforms that voters support, pension reform chief among those, this is a good time in San Diego. I’m very proud of what we’re doing.”

Faulconer made sure to mention that he has always worked well with Democrats and independents since taking office. The City Council, which is dominated by Democrats, also unanimously approved his budget plan, which is “unheard of,” he said.

The cost of keeping the Chargers 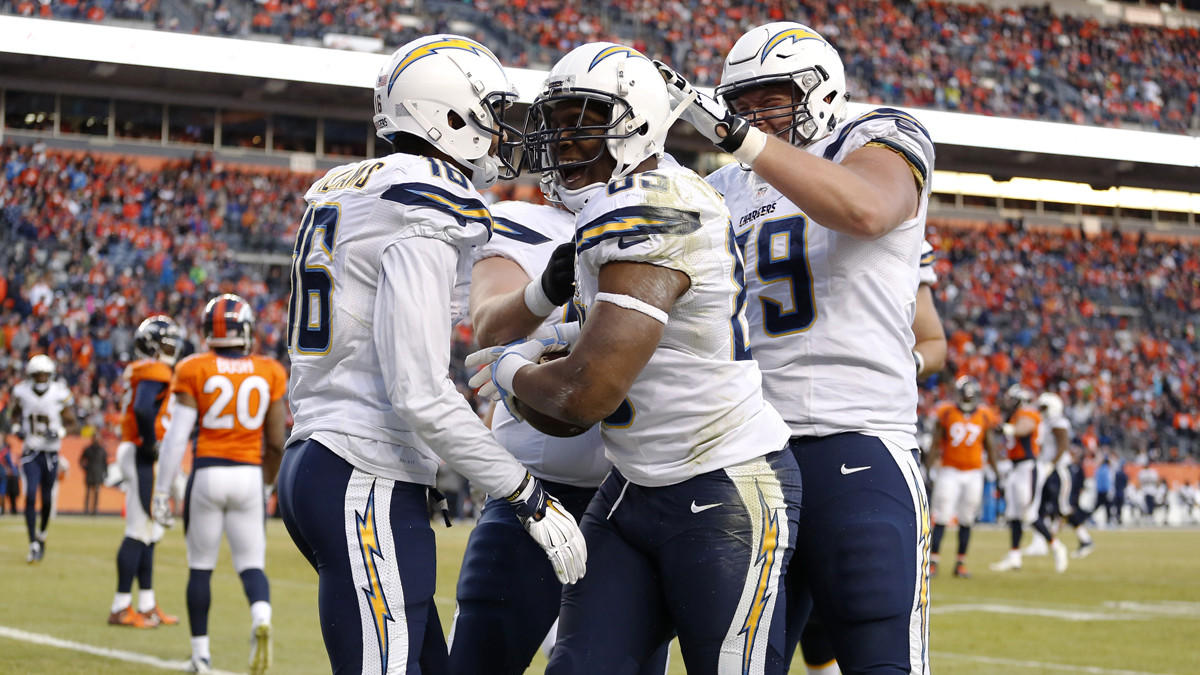 The San Diego Chargers, after years of flirting with a possible move to Los Angeles, agreed to stay in San Diego for the 2016 season and work with Faulconer and other leaders to attempt to reach a deal for a new stadium in their hometown.

Faulconer, a self-described fiscal conservative, supports a proposed local ballot initiative that would provide public money to help pay for a new $1.1-billion stadium in Mission Valley near the football team’s current stadium. Under the proposal, the city of San Diego would provide $200 million and the county $150 million.

“I’ve said all along that we need to have a plan that is fair, makes sense and one that voters will have a final say on,” he said. “We’ve put together what we believe is a very fair plan, one that I believe taxpayers will support.”

Faulconer in 2014 vetoed a measure by the San Diego City Council to incrementally increase the minimum wage in the city to $11.50 an hour, saying at the time it would “put the brakes” on San Diego’s economy.

The council voted to override the veto, but action was frozen after a successful initiative campaign to place the measure on the city’s ballot this June. The mayor opposes the measure, which also would require annual wage increases based on the consumer price index starting in 2019.

“I support raising the federal minimum wage,” Faulconer said. “What I’ve said is I don’t want San Diego to be at a competitive disadvantage, particularly for our small businesses and our entrepreneurs to have one set of wages for San Diego and a different set of wages for surrounding cities.” 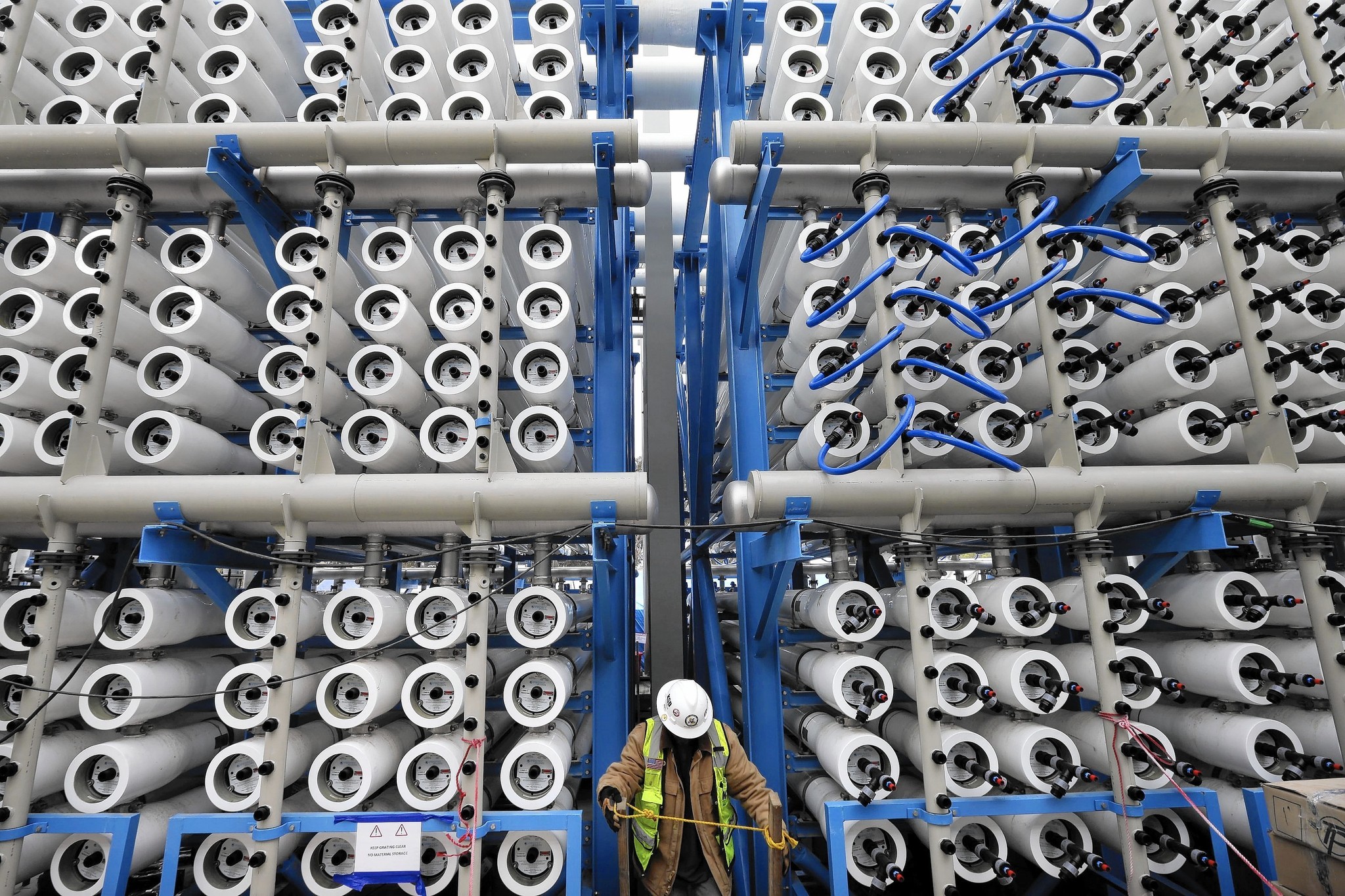 In December, the San Diego City Council approved a “climate action plan” to cut carbon emissions over the next 20 years and rely exclusively on renewable energy, which Faulconer has called a “landmark step toward securing a greener and more prosperous future.”

Faulconer said Monday one of the most pressing issues facing San Diego has been to secure a reliable water supply. About half the water purchased annually by the San Diego County Water Authority is from the Los Angeles-based Metropolitan Water District of Southern California. And in times of shortage, Los Angeles, a founding member of the MWD, has the right to greatly increase its claim to the water, in effect siphoning away water from San Diego.

A mammoth expansion of the San Vicente Reservoir east of Poway and a new $1-billion desalination plant in Carlsbad built by the Boston company Poseidon Water will greatly expand the region’s water supply, and the city now plans an aggressive, $3.5-billion program to turn “recycled” wastewater into drinking water. 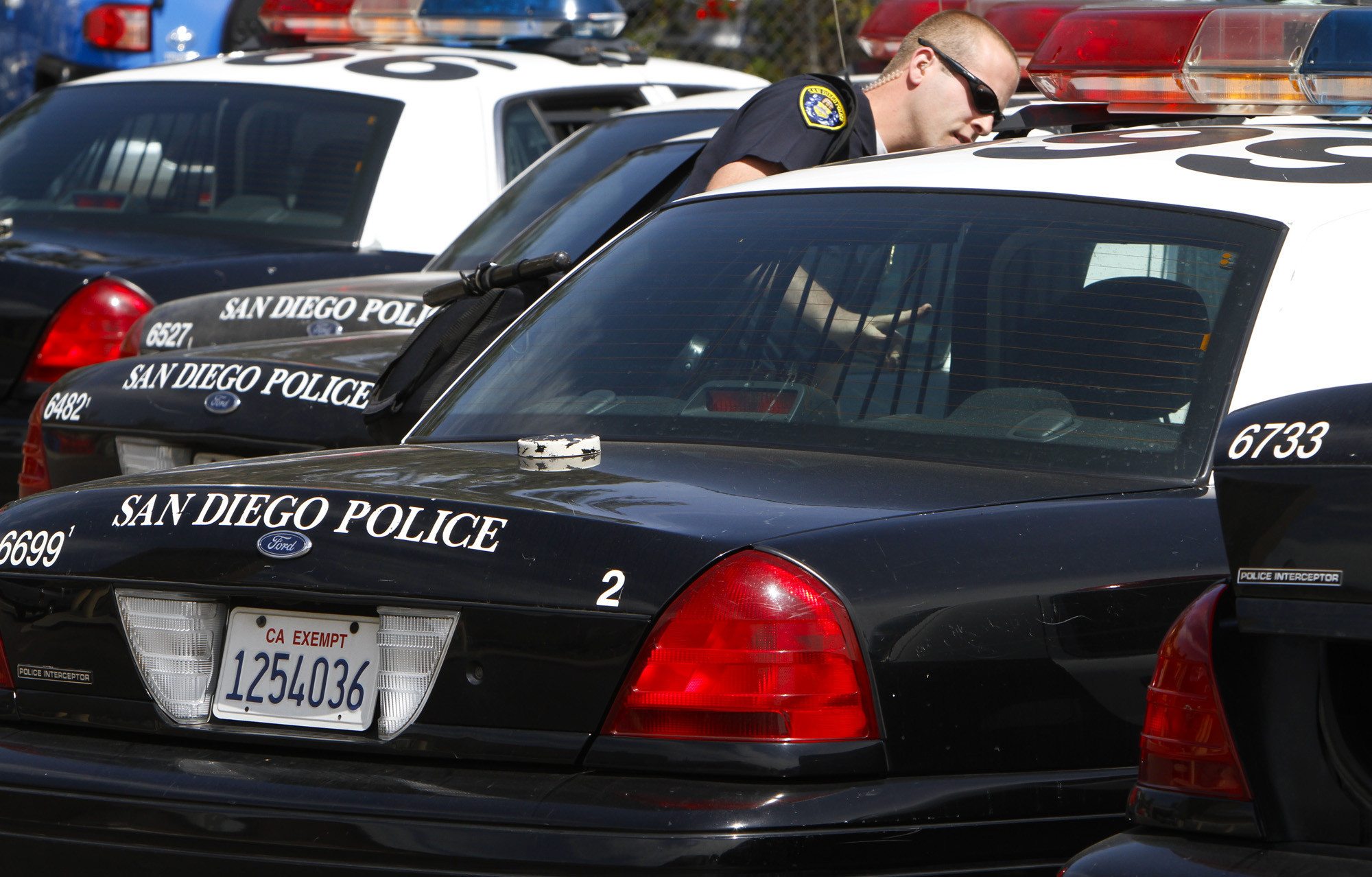 San Diego has not been spared from the national debate over use of force by police following the high-profile slayings of black men and children in Ferguson, Mo., Cleveland, Baltimore and other cities.

Researchers at San Diego State University currently are conducting a study to determine if there is evidence of racial profiling by officers in the San Diego Police Department.

Faulconer said he is determined to address any animosity that may exist between communities in San Diego and the police, and to ensure that the ethnic and racial makeup of the law enforcement agency reflects the diversity of his city's neighborhoods.

“The first day I was in office I brought in new leadership to our police department, and I hired the first female police chief in the history of San Diego: Chief Shelley Zimmerman, who has a wealth of experience and, from my perspective, an absolutely 100% buy-in on community policing,” Faulconer said. “We send a very clear message on what we will tolerate and what we will not tolerate in terms of our department.”

Bucking the GOP line on immigration 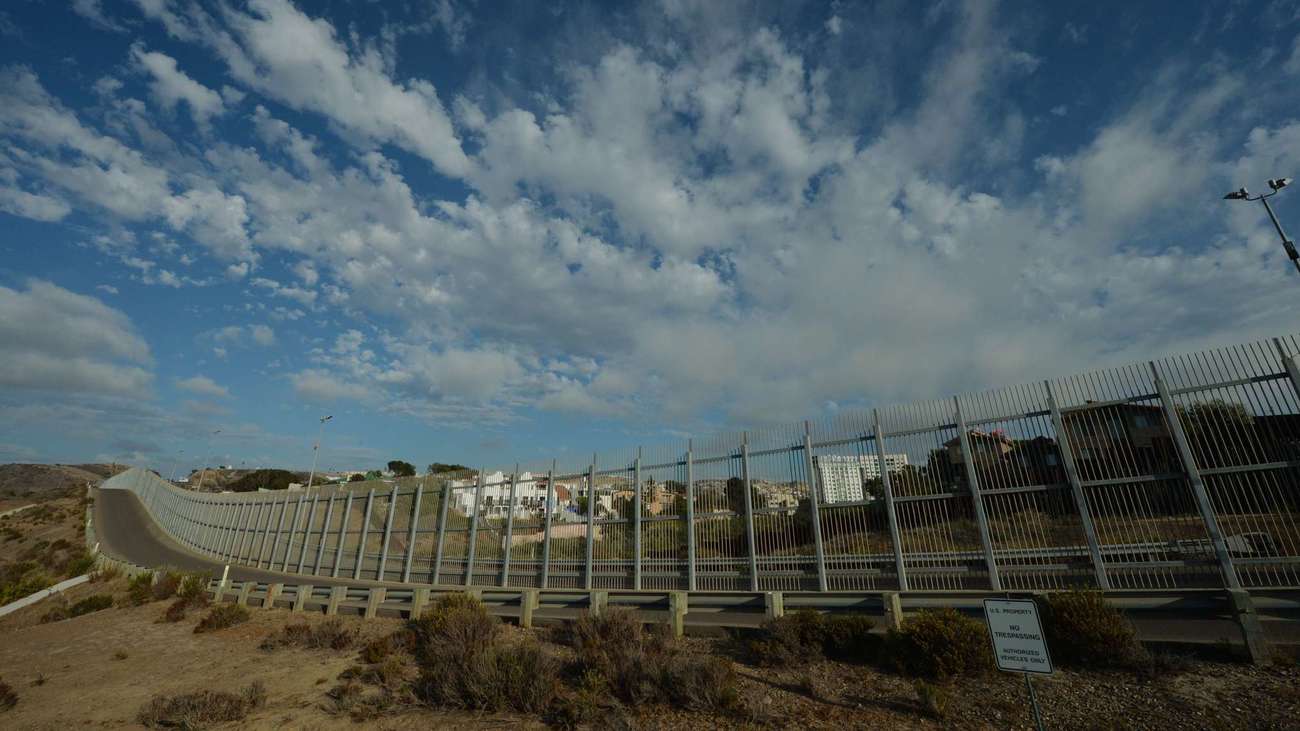 The Mexican city of Tijuana can be seen from the U.S. side of the border. (Mark Ralston / AFP/Getty Images)

Faulconer, who campaigned in both English and Spanish during his 2014 mayoral campaign, said he is a strong supporter for providing a “pathway to citizenship” for the estimated 11 million undocumented immigrants in the country illegally.

His position puts him at odds with some of the top Republican contenders in the presidential race, namely New York billionaire Donald Trump and Texas Sen. Ted Cruz.

It also puts an uncomfortable distance between him and presidential hopeful Marco Rubio – who first proposed and then objected to a plan that would allow a path to citizenship for those in the country illegally. Faulconer is a co-chairman of Rubio’s campaign in California.

How he got here

Faulconer rose to power in San Diego after the spectacular and scandalous demise of his predecessor, Democrat Bob Filner, who was forced to resign mid-term in 2013 amid accusations of sexual harassment.

He's attracted a lot of attention from state Republicans ever since.

“He’s definitely on the short list, and it’s not a long list,” said Bill Whalen, a fellow at Stanford's Hoover Institution who was a speechwriter for former Republican Gov. Pete Wilson.

Wilson himself served as San Diego mayor in the 1970s and early 1980s and, much like Faulconer, had a partisan crossover appeal at the time that won him two terms in the U.S. Senate and two terms as California’s governor.