How a California congresswoman brings Christmas cheer to Capitol Hill

Random visitors, and occasionally members of Congress, filtered past the door wrapped like a present, to snap a selfie with the commander-in-cardboard. 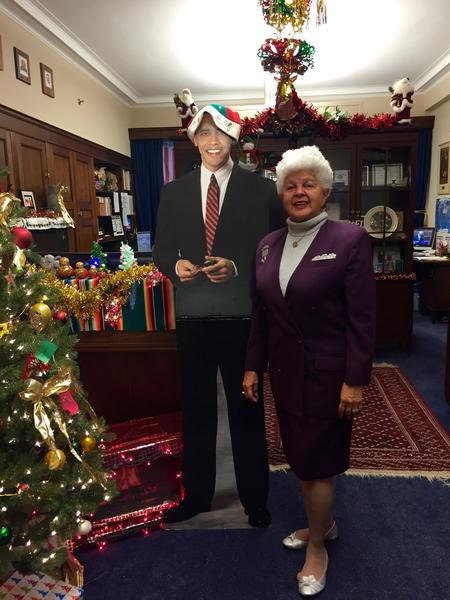 "They just decide they want to come in and stand next to him and get a picture taken," Napolitano said, laughing.

At the White House Christmas party one year, the nine-term Democrat from Norwalk just had to let the president know how much action his doppelganger was getting in her office.

Napolitano said she showed Obama a photo of her staff posing with the cutout. The president pulled it out of her hands and showed it off to other attendees.

Her office on the sixth floor of the Longworth House Office Building is bustling around the holidays, a little cheer that helped as Congress bickered in the final days of the year on spending and world problems.

Decorations appear around the Capitol and House and Senate office buildings in December — Capitol police have a small tree, some office doors hold wreaths or feature entryway stockings — but Napolitano's is one of the more elaborate.

"It makes it nice to walk into an office and see the cheerfulness," Napolitano said.

Each door to her office suite is covered in shiny red or green colored wrapping paper and in the hallway, lit candy cane lawn ornaments lead visitors to the office. Lights shaped like chili peppers frame a mirror in the entryway and tinsel or garland line nearly every available surface. Chinese lanterns hang from the ceiling while Santa, reindeer and angel figurines peek out from shelves.

Napolitano began decorating the space when she took office in 1999, but it gained steam in 2011 when she received some of the 3,000 ornaments made by California children that had adorned the 63-foot-tall Capitol Christmas tree from Stanislaus National Forest.

Many of those ornaments still hang from the branches of an artificial pine reaching 6-feet high, not far from framed citations and awards for her public service. Napolitano said that next year, she plans to ask schools in her district to send new ornaments for the tree.

The wood-paneled office is traditionally more sedate, decorated with pictures from events in California or of her family and maps of the district. Brochures for tourist activities in Washington line a shelf.

Staff have to wait all month to find out what's inside the wrapped boxes at the foot of the tree next to the picture of a fireplace decorated with lights. Eventually she'll buy a faux fireplace with fake crackling flames to replace the photo, said Napolitano, who pays for the decorations herself.

Staff members do the decorating the week of Thanksgiving, she said, as a way to make Washington seem more like home during the hectic final weeks Congress is in session.

"It's part of the family feeling" in the office, Napolitano said.

She tries to maintain the sentiment year-round.

Staff cook in the office weekly, practicing Napolitano's recipes for dishes like enchiladas or migas — a mixture of scrambled eggs, vegetables and strips of corn tortillas.

Male staffers sport holiday ties she buys them and joke about the amount of food they eat at work. A staff member opened a cabinet to show off the seven bags of avocados ripening in preparation for "thank you" guacamole that Napolitano will make for staff who worked on the federal highway funding bill.

In recent years, Napolitano's office has hosted a "hall party" for other members and staff.

Her Longworth neighbor, Rep. Juan Vargas (D-San Diego), said he loves having the decorations next door. He tries to spread his own holiday joy.

"I walk in there now every time I go by ... and I sing a little Christmas song with them and they all laugh, but I love it," Vargas said. Then he belted out the lyrics for "Holly, Jolly Christmas."

The decorations inspired him.

"They put us in the Christmas spirit, so much so that I went out and got a tree myself, carried it down the street and put it in my office," he said. "If you go into my office you'll see a real tree with the real smells. It's terrific."

What's it like to have Christmas cheer the next office over?

"Honestly, I don't know if she is going to like this, but it's like having my mom down the hall," Vargas said. "If I really need anything I can go to her. She's as helpful as anybody I've ever met, she's as kind and nice and sweet as anyone I've ever met, and she always wants to help, but I've gained a few pounds because of her."

These members of Congress don't live in their own districts

Sarah D. Wire covers Congress for the Los Angeles Times. She’s currently president of the Regional Reporters Assn. and serves on the National Press Club Board of Governors.