These California lawmakers don’t live in the districts they represent

It was the spring of 1998. Then-Assemblywoman Grace F. Napolitano was in the middle of a heated battle with fellow Democrat Jamie Casso.


With the primary to fill the House seat opened up by the retirement of Casso’s father-in-law, Democratic Rep. Esteban Torres, approaching, Napolitano and her advisors zeroed in on what usually amounts to a throwaway issue. Casso, a longtime Torres aide, did not live within the boundaries of the congressional district he sought to represent.


"It is the height of arrogance for Casso to choose to live outside the district and thumb his nose at the good people who do live there, in effect, telling them that their communities aren't good enough for him," Napolitano’s campaign manager Chuck Fuentes said in a press release at the time. The campaign used the same line of attack against Casso in mailers to voters.


Napolitano won that primary by 618 votes.

Seventeen years later, Assemblyman Roger Hernandez (D-West Covina) stood in the wet grass of a San Gabriel Valley park and dusted off the same residency ploy as he declared his bid to attempt to unseat Napolitano. This time around it is Napolitano who is being labeled the foreigner. She lives in Norwalk, about 9 miles outside the 32nd Congressional District she currently represents.

“It is ironic,” Fuentes said. 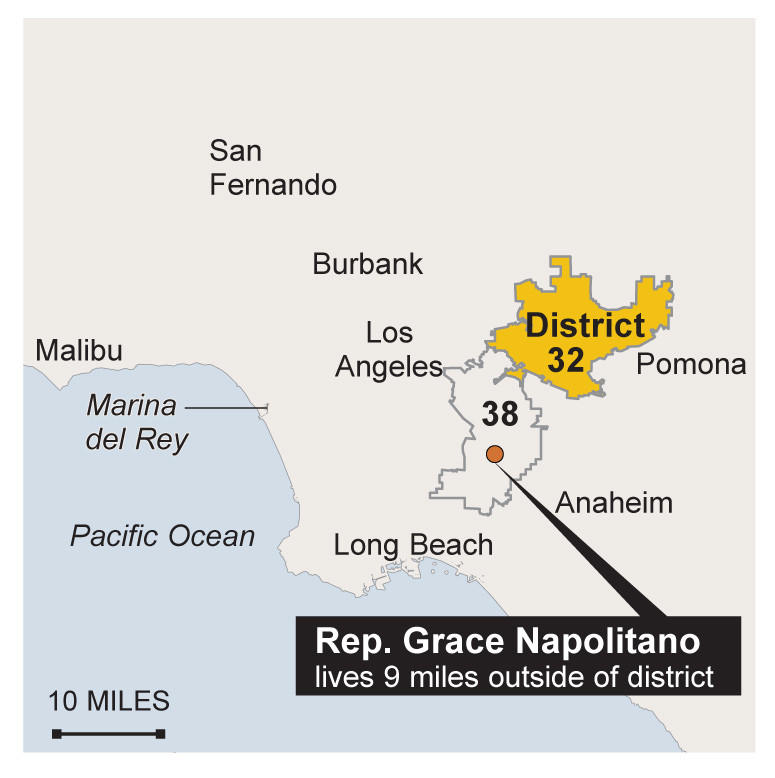 How did the tables get turned on Napolitano? Redistricting in 2011. She found herself sharing a congressional district with Rep. Linda Sanchez (D-Whittier). Rather than run against a colleague, she became a candidate in the next district over, which was vacant. It includes El Monte, Baldwin Park and West Covina. Just over 46% of its voters are registered as Democrats, 25% are Republican and 24% have no party preference.

Napolitano is not alone. Of her 52 House colleagues, at least five do not actually live in the district they represent.


Some state and local lawmakers have been prosecuted for not living in the districts they ran to represent -- a requirement under California law. When it comes to Congress, federal law only requires members live in the same state as the district.


"When you are voting, particularly on big national issues like gun control, foreign policy, taxes, education ... the fact that somebody lives in a different area isn't exactly going to be a trump card," he said.


But that doesn't stop campaigns from trying time and again to raise questions about residency. The issue will certainly come into play in closely watched intraparty congressional campaigns in California in 2016.


"It is like pasta," said Jessica Levinson, a professor at Loyola Law School who studies election law. "The opposition is going to throw it against the wall and see if it sticks."


The lines move around Honda 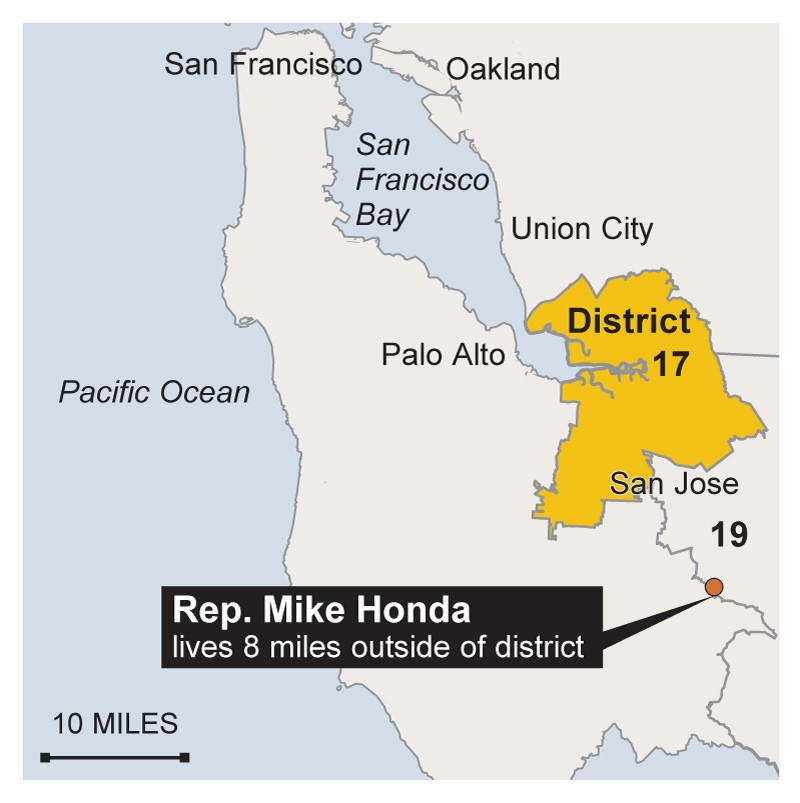 Rep. Mike Honda (D-San Jose) is registered to vote about 8 miles outside of his 17th District.


Honda has lived in the same San Jose home for years, says campaign spokesman Michael Beckendorf, but after the last round of redistricting he found himself in the 19th District. His colleague, Rep. Zoe Lofgren (D-San Jose), has doubled as his representative ever since.

In the end, Honda won his eighth term by 3 points.


Khanna is back for a rematch, though the residency issue has yet to emerge as a major force in his second bid. 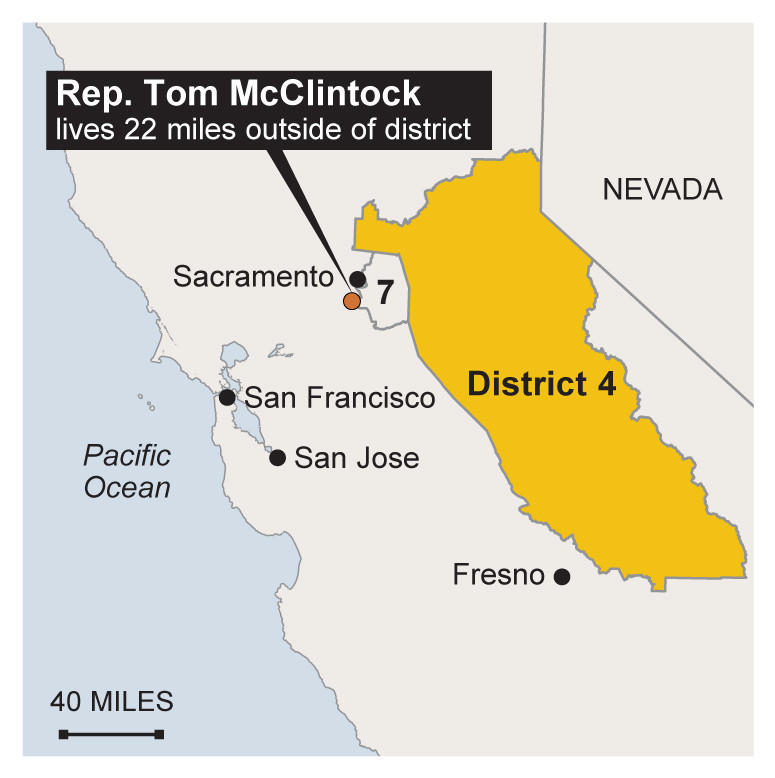 Rep. Tom McClintock (R-Elk Grove) faced attacks from opponents in 2008 when he sought to represent a Northern California district hundreds of miles away from his state Senate district in Ventura County.


As he announced his bid for the 4th Congressional District on the steps of the historic Auburn courthouse in Gold Rush country, a U-Haul truck drove around the building carrying a sign reading "Termed out Tom All the way from L.A," according to a report in the Ventura County Star.

Former Rep. Doug Ose, one of McClintock's rivals for the GOP nomination that year who also lived outside the district boundaries, was responsible for the truck, the Star reported.

McClintock won that race and has prevailed over other opponents who have attempted to paint him with the carpetbagger label.


He now owns a home in Elk Grove but outside his district and is represented by his Democratic colleague Rep. Ami Bera.

McClintock campaign manager John Huey says the congressman intends to buy a house in the district he represents. Just one problem: He bought the house at the height of the market before the 2008 crash. He is waiting for home prices to rebound, Huey said.

State Sen. Isadore Hall (D-Compton) is also trying to use the residency issue in 2016 in the hot race to replace Rep. Janice Hahn (D-San Pedro) in the state's 44th Congressional District.

His campaign put out an Internet ad featuring a video of former Hermosa Beach City Councilwoman Nanette Barragan talking about her "dream" of owning a home in that affluent beach city - miles from the district she is running in.

Barragan grew up in the district but only recently moved to San Pedro to run for the House seat. Her campaign has brushed off the ad. The voters will have their say in June.


Rep. Jerry McNerney (D-Stockton) made a similar move when he relocated from his home in the Bay Area suburb of Pleasanton to the Central Valley to stay in the 9th Congressional District after it was redrawn in 2011.

His 2012 opponent, Ricky Gill, accused the congressman of never having moved. Gill's campaign went so far as to have a staffer wait out outside McNerney's Pleasanton home to make a video of him picking up his morning paper.


McNerney defended his slow move to Stockton and beat Gill by 11 points.


Just over the line 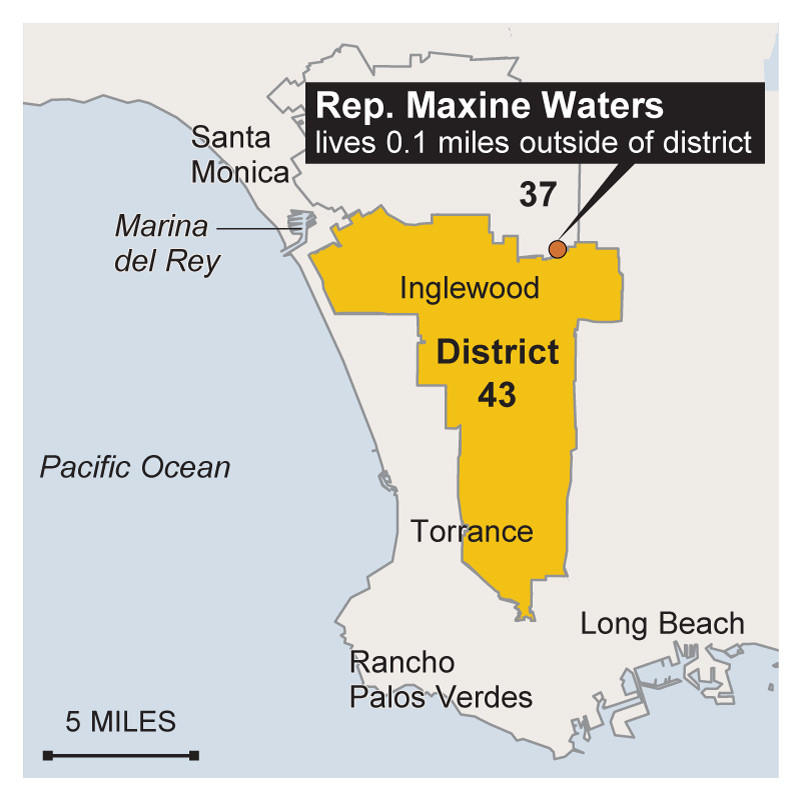 Democratic Rep. Maxine Waters is registered to vote at her home in the Vermont Knolls neighborhood in South Los Angeles. The home used to be within the boundaries of her district, until redistricting shifted some of Waters' neighbors into the 37th District now represented by Democratic Rep. Karen Bass.

Waters’ 43rd District is about a three-minute walk from her front door around the corner and across Vermont Avenue. That is news to some voters on her block who figured their famous neighbor -- the one who has earned national headlines over the course of her 13 terms in Congress -- represents them in Washington.

Seth Greene, a 26-year-old teacher who lives in the neighborhood was stumped when asked who represented him in Congress. “I want to say Maxine Waters,” he said. “I know I’ve voted for Maxine Waters in the past.”

Standing on his porch on the same block as the congresswoman was Catalino Linares, 74, a retired carpenter. He tilted his head back as he tried to recall his past votes. Wasn't Waters his representative? He said he may have marked the box for Bass, but he didn’t remember her name.

“I didn’t know,” he said in Spanish with a shrug.


Waters won her last two campaigns with 71% of the vote. 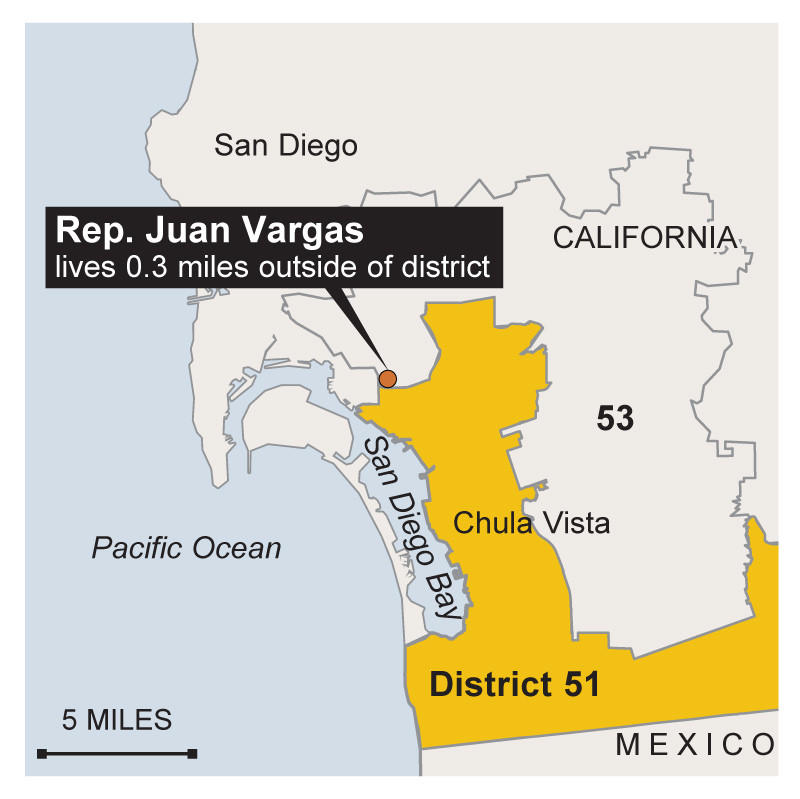 Rep. Juan Vargas (D-San Diego) lives in the Golden Hill neighborhood, about eight blocks outside of the northwestern edge of his 51st District, which stretches to the Arizona border.


Democratic Rep. Susan A. Davis is his member of Congress. He too has coasted to large victories in his two terms in office.

Orange County Rep. Mimi Walters also lives outside the boundaries of her 45th District. The Republican was briefly registered to vote at an apartment in Irvine, where she was elected to a newly drawn state Senate seat in 2012. She re-registered at her longtime Laguna Niguel home in 2014 before winning the congressional seat.


Walters' home is inside the boundaries of the 48th District of Rep. Dana Rohrabacher (R-Costa Mesa), just under 4 miles from her own.

Questions about residency can matter less for voters in California because of the distance between the coasts and the expectation that members -- especially senior ones with leadership roles or seats on major committees -- will usually be away, Mitchell said.

For her part, Napolitano is up front about where she lives. At events, the congresswoman will mention it on her own, to Fuentes' chagrin. Will voters in 2016 see it as she framed it back in 1998, and will her residency matter? Napolitano is shrugging it off: "Well, I certainly hope not."

This post has been updated to correct the result of Grace Napolitano's primary win in 1998.

Assistant editor Javier Panzar oversees California audience engagement for the Los Angeles Times’ California section. He previously worked as a digital editor on the News Desk. Before that, he was a reporter covering state and regional politics as well as breaking news in California. Panzar started at The Times as an intern and then a MetPro fellow in 2014. He was born and raised in Oakland. His reporting has appeared in the Boston Globe, the Seattle Times, the Orange County Register and UC Berkeley’s independent student newspaper, the Daily Californian.