The Los Angeles Times is releasing its first ever online poll, a snapshot of residents in our community and their thoughts about their neighborhoods, and the advantages and disadvantages of living here. See the poll

So what’s the big deal?

Dating back decades, we’ve done phone polling, in which surveyors randomly dial phone numbers from a sampling of registered voters and pose a series of questions to people who answer and are willing to participate. (See our recent poll of the presidential race as an example.) A successful interview can last anywhere from 15 to 30 minutes. Fewer people have land lines today, and resistance to participating in telephone polls has increased. Phone polls have long been considered the standard, but the polling industry is in flux. Some of the top organizations doing the surveys say costly and time-consuming phone polls are no longer the best method.

"In the last twenty years, telephone response rates have fallen from 36% (1997) to 9% (2012)," Drew Lieberman, Ben Winston and Nicholas Beaudoin of Greenberg Quinlan Rosner Research wrote in a memo prepared for The Times this summer weighing the merits of online versus telephone polling.

There is a lot of research out there about online surveys, and more political and media organizations are using them to take a snapshot of sentiment.

The team we work with pointed to recent results in the United Kingdom, suggesting online polls were better predictors of a shift toward the Conservatives in the final days of the election.

Web-based surveys also can be more dynamic — respondents could be shown a political ad, for example, and be asked to respond to it. Images, videos and other graphics aren’t possible in telephone polling.

But online polling also can undersample groups of people who might have less access to the Internet, or exclude people who aren’t as comfortable taking a survey in English.

Who took this poll?

Take a look at the demographics of the 1,500 people who participated in this survey. 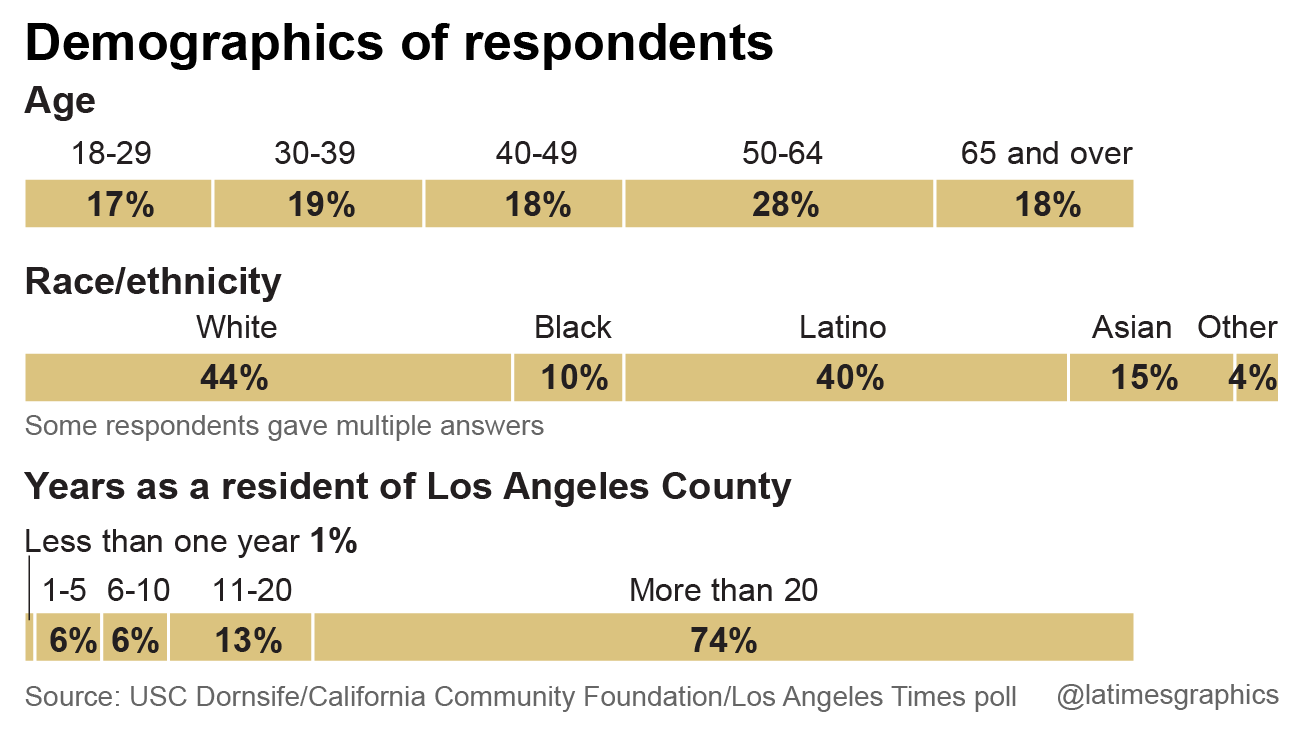 In this particular survey, respondents were recruited to participate in English and just 2% of respondents took the survey in Spanish.

If a group seems undersampled, pollsters weight the results to get a reliable simulation of the population in question. They account for socioeconomics, and adjust based on what they know about the population. That’s the same thing they do for phone polling.

The Los Angeles Times once detailed in a FAQ about polling that online surveys weren’t considered a reliable measure of public opinion. One of the concerns cited was that those opting to take surveys were a self-selected sample as opposed to those who would be randomly contacted and asked for their opinions -- a factor that could sway the results.

The technology and industry have shifted since then.

Respondents in this poll came via multiple panels — groups of people who sign up via email to take surveys. People opt-in to take part in numerous research surveys on anything from choice of breakfast cereal to preference in political races. Survey firms dole out points to people completing surveys, and those points can be exchanged later for small consumer rewards such as gift cards. There’s no tie between any incentives people get for taking the polls and the things they are being queried on. No money changes hands.

And software can detect if someone quickly checks answers without reading the questions, and those results are tossed from the tabulation.

Lieberman, Winston and Beaudoin wrote in the memo that pollsters have found online surveys can provide more honest answers in some cases.

"Live telephone surveys involve direct human interaction, and a commonly-observed trend is the respondent’s desire to provide the interviewer with a socially desirable answer," they wrote. In other words, people lie, especially on sensitive topics.

And more people have access to computers than ever before. In fact, California has more high-speed Internet households than the national average.

Data from 2014 show California on the high-end of high-speed Internet usage. (Census.gov)

Carson resident Linda Hopkins, 61, told the Los Angeles Times she appreciated the ease of participating in this online survey. "I have done telephone surveys where when you talk on the phone, they have a script so they’re just following the script. If that’s what it is, just send it to me and I can do it by email," she said.

For this poll, Times reporter Nita Lelyveld dove into the data and pulled out some interesting details about why Angelenos feel like they are too busy to get involved or give back, even though they want to help.

As Antonia Hernández, president and chief executive of the California Community Foundation, told Lelyveld, "L.A. County is a county of 10 million people, and sometimes people just feel like they don’t know where to turn."

We asked Los Angeles County residents more than 100 questions, and there’s a lot of great information in there. Go check it out.

This survey was a bit of an experiment for us — starting with a sample of one county to get a sense of a community, rather than a scientific cross-section of voters backing a particular candidate.

We’ll be doing more polling in the coming election year, and our team here is working with USC Dornsife and our longtime pollsters to make sure we’re all comfortable that the methodology for future political surveys is sound.

What do you think?

Share your reaction with us via Twitter at @latpoliticsCA. You also can send your thoughts to politics@latimes.com.

Politics at the local level pointless? That's what many Californians think

Poll finds L.A. County residents want to give back but don't have time

For more, go to www.latimes.com/politics.