The Clippers became only the ninth team with a 3-1 lead to lose a best-of-seven series. Doc Rivers becomes the first coach in NBA history to have two teams fail to close out a playoff series with a 3-1 lead.

The Rockets will advance to play the Golden State Warriors in the Western Conference finals, which begin Tuesday in Oakland.

Clippers' meltdown is complete in Game 7 loss to Rockets

The Clippers' season came to an end Sunday afternoon with a 113-100 loss to the Houston Rockets in Game 7 of their second-round playoff series at Toyota Center in Houston.

Instead of making the Western Conference finals for the first time in their 45-year existence, the Clippers made the record books for a much less desirable reason. The Rockets became only the ninth team in NBA history to recover from a 3-1 series deficit to advance to the next round.

The Rockets will play the Golden State Warriors in the conference finals, which begins Tuesday in Oakland.

The Clippers trailed by as many as 15 points in the second quarter before cutting their deficit to three points, 60-57, at the top of the third quarter. The Rockets then went on a 25-11 run to take a 17-point lead into the fourth quarter.

The Rockets went on to push their advantage to as many as 20 points in the final 12 minutes.

Late in the fourth, the Clippers went on a 9-0 run to cut their deficit to eight points, 102-94, with 2 minutes and 6 seconds left after Blake Griffin made a slam dunk -- but it was too little, too late. In the final minute, the Rockets outscored the Clippers, 9-4, to win by 13 points.

Blake Griffin had 27 points on 13-for-23 shooting, 11 rebounds and six assists. Chris Paul had 26 points, 10 assists, four steals and four turnovers. Jamal Crawford had 17 points off the bench, while DeAndre Jordan finished with 16 points and 17 rebounds.

If it's any small consolation, there's a silver lining for a different L.A. team:

It's all but over

The Rockets are about to become only the ninth team in NBA history to overcome a 3-1 series deficit in the playoffs. They have a 113-100 lead with less than 15 seconds left to play.

In a last-gasp chance to win Game 7 of their second-round playoff series, the Clippers are resorting to fouling Dwight Howard.

DeAndre Jordan dunked, and was fouled, with 1:26 left to cut the Clippers' deficit to 104-96. Jordan missed the free throw and Chris Paul fouled Howard on the rebound. It worked, as Howard missed both free throws.

J.J. Redick missed a three-pointer on the ensuing possession, though, and the Rockets answered with a three-pointer by Trevor Ariza for a 107-96 lead with 55.8 seconds left.

The only problem is that the Clippers can't foul Howard unless he touches the ball. A purposeful foul away from the ball will result in free throws and Houston retaining possession of the ball.

But a few seconds later:

Hold on, the Clippers are on a run

All is not lost, yet. The Clippers have gone on a 9-1 run to closer their deficit to 102-92 with 2:24 left when J.J. Redick hit a running jumper on the baseline after a Rockets turnover.

DeAndre Jordan dunked off a feed from Chris Paul to start the run, while Blake Griffin made one of two free throws and a layup on back-to-back possessions.

The Rockets were deducted a point upon review of Corey Brewer's long jumper moments earlier.

Make that down by 10

Or you could see it this way:

Rockets forward Corey Brewer made a three-pointer with 5 minutes and 3 seconds left in the fourth quarter to give Houston a 102-83 lead.

According to Clippers broadcaster Ralph Lawler, first team to 100 points wins. It's the law. 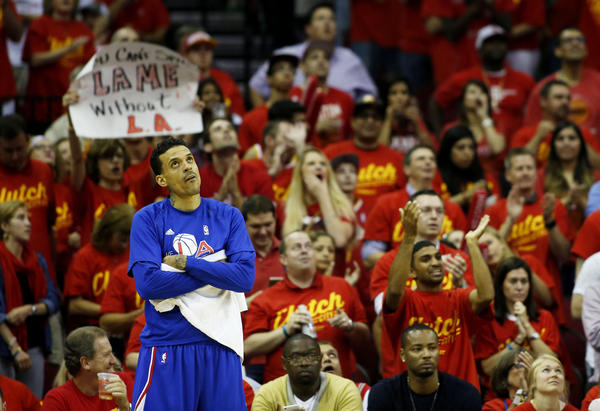 With less than 6 minutes left

The Clippers trail the Rockets by 18 points, 94-76, with 7 minutes and 16 seconds left. The Rockets are on their way to becoming only the ninth team in NBA history to recover from a 3-1 deficit to advance to the next round.

Howard out; intentional fouls have downside

This just in from Boston

Not looking good for Clippers

Does that count as multitasking?

Dwight Howard opened the fourth quarter with a three-point play to give the Rockets their biggest lead of the game at 20 points, 88-68.

The Rockets closed the third quarter with an 11-2 run to take their biggest lead to that point at 85-68 when James Harden made a step-back jumper with 0.1 seconds left.

The Clippers, who have never led, cut their deficit to three points, 60-57, after J.J. Redick made a layup with 8 minutes and 32 seconds left in the third quarter.

The Rockets went on a 10-2 run to regain an nine-point lead, 70-61, after Pablo Prigioni made a three-pointer with 5 minutes and 26 seconds left in the third quarter.

Chris Paul leads the Clippers with 17 points, but he only has three assists. Blake Griffin has 16 points, nine rebounds and six assists. Jamal Crawford has 15 points.

Side note: A different kind of contest

Time for one last huddle

Clippers down by double digits again

Clippers need to make a push

Some stats for you: 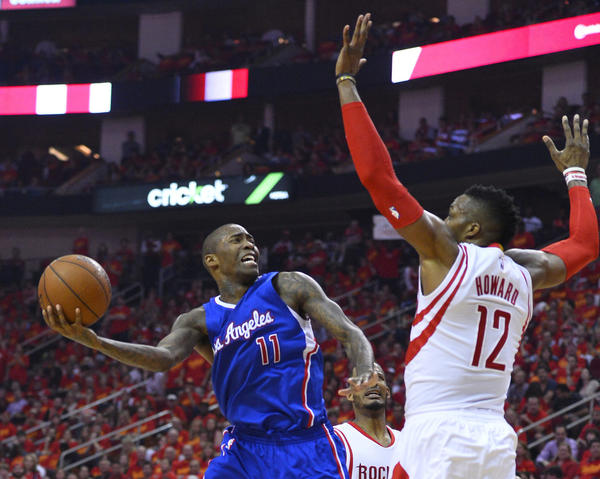 The Rockets went on a 10-2 run to turn their three-point lead into an 11-point advantage, 70-61, after Pablo Prigioni made a three-pointer with 5 minutes and 26 seconds left in the third quarter.

Rockets have an answer

The Rockets turned their three-point lead into an eight-point advantage, 65-57, after scoring five quick points behind a dunk from James Harden and a three-pointer from Josh Smith with just under 8 minutes left in the third quarter. 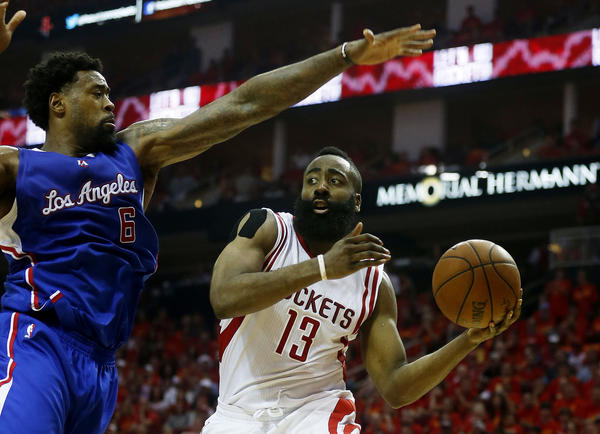 The Clippers went on a 9-1 run to cut their deficit to three points, 60-57, after J.J. Redick made a fastbreak layup with 8 minutes and 32 seconds left in the third quarter.

The Clippers trailed by as many as 15 points in the second quarter.

Clippers turn up the pressure

Jordan and Harden are dinged

Chris Paul made a pull-up jumper with 10 minutes and 19 seconds left in the third quarter to cut the Clippers' deficit to six points, 59-53.

Paul leads the Clippers with 15 points on six-for-11 shooting.

Throw it down, big man 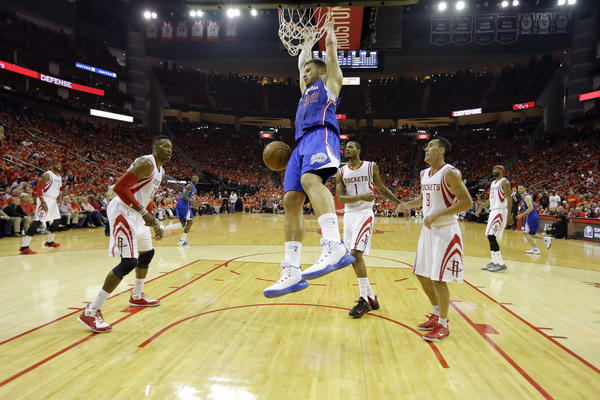 Clippers trail by 10 points at halftime

The Clippers cut their 15-point deficit in the second quarter to six points, 52-46, after Chris Paul made two free throws with 1 minute and 29 seconds left.

Jason Terry then made two free throws and Dwight Howard added a slam dunk to put the Rockets up by 10 points, 56-46, at halftime.

James Harden has 12 points and five assists. Howard has 12 points on five-for-five shooting and 11 rebounds -- but he also has two fouls. Jason Smith has nine points.

Blake Griffin leads the Clippers with 12 points, six rebounds and four assists. Chris Paul has 10 points, but only one assist. Jamal Crawford has 10 points off the bench, eight of which he scored in the second quarter.

The Rockets opened the second quarter with an 8-0 run to take their biggest advantage of the game at 15 points, 36-21, with 10 minutes left in the first half.

At halftime, Clippers trail by 10 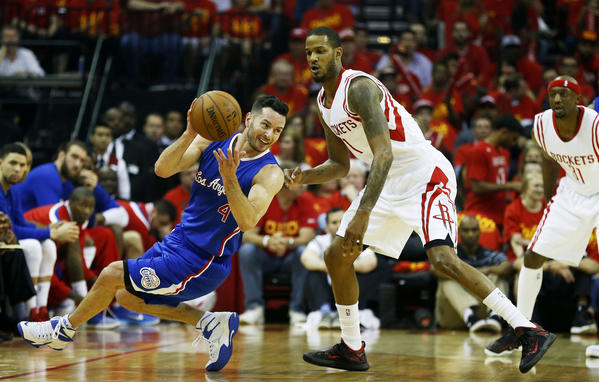 Paul shows up with an assist

The Clippers have cut their 15-point deficit to single digits, 48-40, after DeAndre Jordan made a slam dunk with 4 minutes left.

Finish half with a flurry?

The Rockets are killing the Clippers from beyond the three-point line, making six of their 11 attempts (54.5%) while the Clippers are three for 12 (25%) from that distance.

The Rockets are ahead, 46-33, with just under six minutes left in the second quarter.

Jamal Crawford has scored eight points so far in the second quarter, including two three-pointers, to help cut the Rockets' 15-point lead to 10, 43-33, with 8 minutes left.

Nothing good to speak of

Terrence Jones was fouled on a made layup with 16.7 seconds left in the first quarter to put the Rockets up by nine points, 28-19, tying their biggest advantage of the game.

With 0.4 seconds left, Jamal Crawford made a running jumper to cut the Clippers' deficit to seven points.

The turnovers keep on coming

Dwight Howard picked up his second personal foul with 3 minutes and 32 seconds left in the first quarter.

Blake Griffin made a layup with 8 minutes and 10 seconds left to tie the scoree, 7-7. The Rockets are outshooting the Clippers from the field, 50% to 37.5%, and outrebounding the Clippers, 4-3.

The Rockets went on a 7-0 run to take a 14-7 lead with 7 minutes left in the first quarter. James Harden scored each of those points with two free throws, a three-pointer and a layup.

The Rockets have taken a 7-3 lead with 10 minutes and 18 seconds left in the first quarter. The Clippers' only basket came off a three-pointer by J.J. Redick.

Trevor Ariza made a three-pointer for the Rockets while Josh Smith had a dunk and a layup.

This is what it comes down to

Getting ready to play

Their fate awaits them

Some history to avoid repeating

The day could belong to CP3

Who will be clutch? 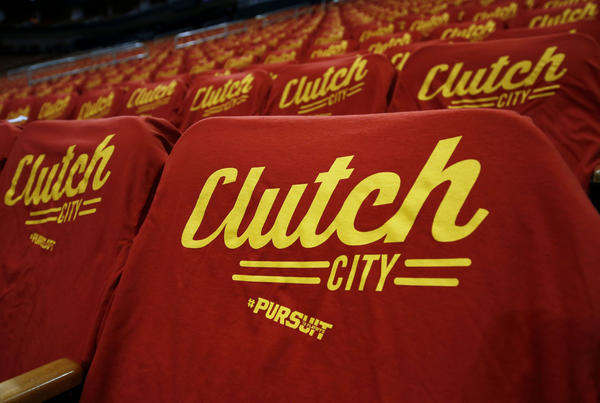 Melissa Rohlin is a former sports reporter for the Los Angeles Times.