Major League Baseball has been going strong for parts of three centuries, which has given pros a long time to concoct shady ways to get ahead on the scoreboard or the betting slip.

Some instances of cheating became massive scandals -- such as throwing the World Series. Other examples of unfair advantages include putting a foreign substance on the ball and tampering with a bat.

A new controversy erupted Tuesday, when it was reported that the FBI is investigating whether the St. Louis Cardinals hacked into the Houston Astros' computers to steal player personnel data.

Here are a few memorable MLB scandals, with a focus on gambling and equipment tampering. 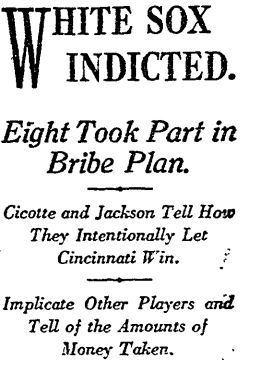 Eight members of the Chicago White Sox, including "Shoeless" Joe Jackson, were banned for life from Major League Baseball for throwing the 1919 World Series in order to profit from gamblers. The best-of-nine series was against the Cincinnati Reds.

The fix was called "the greatest scandal in baseball history" and led to the appointment of the league's first commissioner, federal judge Kenesaw Mountain Landis, according to MLB.com. One of Landis' first acts as commissioner was banning the eight players, dubbed the Black Sox, involved in the scandal. All players were acquitted of any criminal wrongdoing, according to MLB.com.

Some batters have tried to give themselves an edge by playing with a corked bat. Essentially, part of the bat -- usually the barrel -- is drilled out and filled with a lighter material such as cork, thereby giving the hitter a faster swing.

Players have been caught using corked bats on multiple occasions. One of the more famous instances was in 2003, when Chicago Cubs slugger Sammy Sosa's bat splintered, revealing its illegal innards. His explanation: The corked bat was for practice and he grabbed it for the game by mistake. Sosa was was ejected from the game against Tampa Bay and suspended for seven more.

Tampering with the ball

If put on a baseball, "foreign substances" -- such as pine tar, sunscreen, petroleum jelly and even spit or snot -- can change the ball's flight path, making it less predictable for batters. So pitchers are not allowed to put any substance on the ball or even have it on their person. But sometimes they do anyway.

Last year, Yankees pitcher Michael Pineda was suspended 10 games after being ejected for having pine tar on his neck while playing the Red Sox at Fenway Park. "I'll accept [the suspension] because I know I made a mistake," ESPN quoted him as saying.

As recently as last month, two pitchers were penalized for having substances on their arm that could have been put on the ball. Orioles pitcher Brian Matusz was suspended for eight games for having something sticky on his arm during a May 23 game against the Marlins. Milwaukee Brewers pitcher Will Smith was suspended for six games for having a mixture of rosin and sunscreen on his arm while playing the Atlanta Braves on May 21.

Pete Rose, Major League Baseball's leader in all-time hits, bet on games and paid a hefty price: In 1989, he was banned from the league. In a 2007 interview, Rose told ESPN that he bet "every night" on the Cincinnati Reds while he was the team's manager. As a result of the ban, Rose is not eligible to manage teams or to be inducted into the Baseball Hall of Fame.

"I screwed up," Rose told CNN about his decision to gamble. "There was something missing when I quit playing as a player." But there might be some hope for the 17-time All-Star, who played for the Reds, Philadelphia Phillies and Montreal Expos. The MLB has a new commissioner, Rob Manfred, who has said he'll consider Rose's request for reinstatement.

The use of steroids and other performance-enhancing drugs has tainted several of the game's biggest stars and records, including the accomplishments of sluggers such as Mark McGwire and Alex Rodriguez. MLB began testing in 2003, and over the years it has ramped up the penalties for failed tests. However, the use of performance-enhancing drugs continued. Rodriguez, Ryan Braun and Nelson Cruz are among the prominent players who have been suspended in recent years.

Column: FBI probe of Cardinals makes it fair to question series with Dodgers